It has been a busy month (was it ever thus) but we start with a major announcement from the BLR Trust about a large grant for the Red Dragon Project.

The Trust is delighted to announce that its flagship Red Dragon Project, which is working towards extending the Bala Lake Railway to a new terminus in Bala, has been awarded a £23,000 grant by the Magnox Socio Economic Fund.

The Nuclear Decommissioning Authority established the fund to mitigate the impact that decommissioning its nuclear power stations would have on local communities. It provides support for local employment, economic diversification and social infrastructure, and to improve education and skills provision.

The Magnox socio-economic scheme is providing invaluable support in the early stages of this transformational project, boosting the economy through tourism to the area and bringing much needed employment opportunities. This helps to build a sustainable future.

This is fantastic news that gives further impetus to a project that continues to build momentum. There are so many people on board with this project and it has got the town buzzing. With the necessary land purchases well in hand, we are getting ever nearer to the magic moment when we start laying track, although we still have a lot to do before then.

Explaining how the Trust qualified for this grant, Julian added:

The extension means so much more than an extended running line as it will completely transform the fortunes of the town. The overwhelming support this project has from the local community shows how important it is to them and why it is so important that we keep up the pace.

The grant will go towards the engineering consultancy necessary for the extension designs, in particular working with Natural Resources Wales to include the formation for the railway during their forthcoming scheme to upgrade the flood defences along Llyn Tegid.

February was a good month with the railway running for 10 days to capture the half-term period, and the weather obliged by remaining mostly dry and welcoming. The end of month figures reveal that passenger numbers were up by 7% on the same period last year, and these figures do not include the 1st and 2nd of March when, on the 1st, extended trains of six carriages ran packed out as part of our St. David’s Day celebrations. We feature these here as March is a non-running month, with the season proper starting on 2nd April.

The Penrhyn Coach has been progressing well, weather permitting, and it should be remembered that the whole project is being constructed by David Hale alone and outside, not in a building.

We have up to now featured parts of the coach as it progresses but, to give an idea of how close we are to seeing the finished article, we show a photo of the man himself, David Hale, relaxing inside his remarkable creation, and the sheer quality of his craftsmanship is evident.

Completion is due later in the year and we will keep you informed of any developments.

It is not every day that we are able to welcome a New Locomotive to the BLR but on the 23rd February, the BLR took delivery of Murphy, a Schöma (pronounced Sherma) diesel tunnel loco kindly donated by Murphy Construction, thanks to the efforts of BLR volunteer Graham Ashby who works for the concern and who persuaded the company to make the donation. 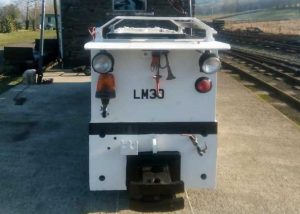 Murphy is a 2001-built tunnel diesel loco and ‘her’ arrival at Llanuwchllyn means she has become Britain’s newest preserved diesel. The loco, number LM30, is one of a batch procured new from the works by J. Murphy & Sons Ltd for the 26km Cricklewood to Elstree Tunnel project for the National Grid in 2001. These locos have since been used continuously on various projects such as the Olympic Park Tunnel, Bankside, Preston and Harefield, and were last used in New Cross on the building of the Crossrail tunnels. Murphy offered the loco as a donation to the Bala Lake Railway after enquiries were made by Graham Ashby, a BLR volunteer who now works for the company.

We are immensely grateful to J. Murphy & Sons for the generous donation of the loco. It will be tremendous to add a modern 21st century loco to our fleet, and one which will become very useful to us with the push to extend the railway into Bala Town.

Murphy was built to a gauge of exactly 2 feet (610mm) and will have to be re-gauged to the BLR’s 1 foot 11 5/8 inches (600mm), which may not sound much but is critical, particularly on tight points. You may recall that our Hunslet, Winifred, had to be re-gauged from 1foot 10 ¾ inches (578mm) to fit our tracks. It will be used initially during the construction phase of the line’s extension to Bala, and it is intended eventually that it will become the resident shunting loco at the new Bala sub-shed. The railway intends to name the loco John Murphy in recognition of its previous ownership and to mark the company’s generosity towards the BLR.

Schöma (with an umlaut), or Schoema as it can also be written in German, is a company dating back to the early part of the 20th century. Initially, Christoph Schöttler worked with his father at the latter’s DIEMA factory, another well-known engineering company, the name being derived from Diepholz, a town in northern Germany SW of Bremen where the factory was established, and Maschinenfabrik, meaning factory. But after a while, Christoph left after differences with his father developed and, in the 1930s, he duly set up on his own in, of all places, an old DIEMA factory under the partially acronymic name of Schömag, a shortened version of Schöttler Maschinenfabrik Aktien Gesellschaft, which was soon changed to Schöma.

The company originally produced tractors and high quality milling machines, as well as rail vehicles which soon became the major part of the business. Apart from wagons of all sizes and gauges, locomotives covering the whole spectrum became the principle part of the business and the firm also specialised in field railways, mine locomotives, narrow-gauge diesels and also developed their own engines and transmissions.

In the 1970s, they really began to concentrate on tunnel locos, an area which now forms the greatest part of production and to illustrate just how they have cornered the market, Schöma locos were/are currently being used in several locations in the UK plus, amongst many locations around the world, in Mumbai (battery powered), the Line 7 extension in New York, the Gotthard Base Tunnel (where around 120 locos were in use), Cairo, Madrid, London and, of course, in the building of the Channel Tunnel. Indeed, it is fair to say that if someone is building a rail tunnel, Schöma locos will almost certainly be involved . 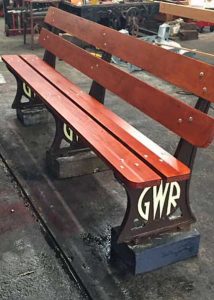 The Carriage & Wagon Department have been busy on numerous jobs and two have featured much during the month.

The team is creating a new Llanuwchllyn name board, or running in board to give it its correct term. It is being constructed of hard wood this time thus it should last a long time, most of the work being done by Geoff Hodgkinson.

Other members of the team, Luke, Jonathan and Martin, have now painted and erected a GWR bench seat, donated by Bob Greenhalgh (of flapjack fame) and the whole job was done in a day, quite an achievement! It will eventually be used at the new station in Bala.

Dates for the diary:

Typical of the fun events that the BLR host, there will be a repeat of last year’s Race the Train on Saturday, 6th April, with the train leaving Llanuwchllyn at 17.00. Paddle-boarders and those in boats start from near Llangower and race the train to the sailing club near the Bala terminus, not a difficult task for the train, you might think. But with the finish being located at the sailing club meaning that one of the loco crew has to run quite a way from the station, last year’s race was diplomatically declared a dead heat. The noise made by train-born supporters was quite something, and it is all great fun.

On Friday, 19th April through to Monday 22nd, our annual Easter Egg Hunt takes place and all details can be found on this website.

Lastly but by no means least, a reminder about our Volunteers Day on Sunday, 28th April, the perfect opportunity for anyone interested in becoming a volunteer, or just seeing what all the fun is about, to gain first-hand experience of all facets of the railway. Not everyone likes everything but volunteering on a preserved railway is so rewarding. Give it a try. Find out more by clicking below to go to our volunteering page…