June was a good month for the railway and passenger numbers are described as healthy, although the strange assortment of weather patterns was hardly conducive to record-breaking numbers. Nevertheless, there were consistent flows of visitors and the mid-month Gala, again in spite of the weather, was well attended.

The Gala always tries to feature one or two visiting locomotives and this year, the Kerr Stewart ‘Joffre’ on loan from the Apedale Valley Railway did not disappoint. There were many photographers around for the weekend and the BLR scheduling did them proud. Many trains were double-headed and on top that, all the red locos, Maid Marian, Alice and George B, were coupled together for one service. The traditional Saturday evening cavalcade featured five locos in steam, including Winifred and the ‘Joffre’, and they were duly sent off down to the bottom of Dolfawr Bank. After preparations, the locos then made a spirited ascent of the bank some yards apart. The photographers loved the whole spectacle. 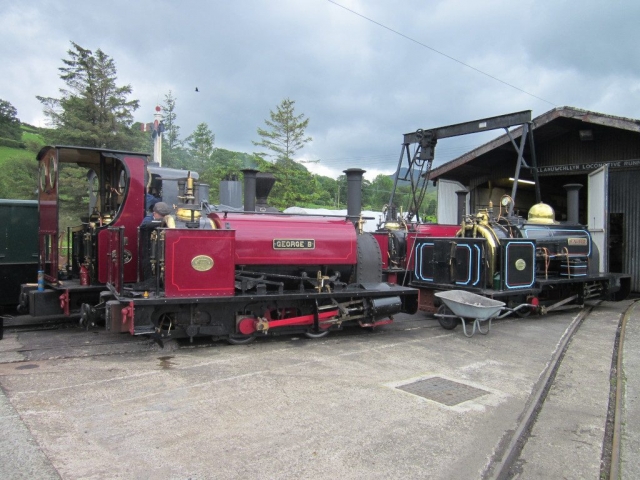 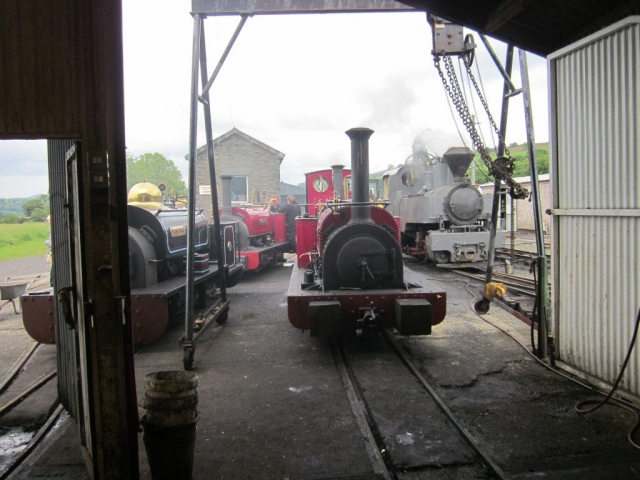 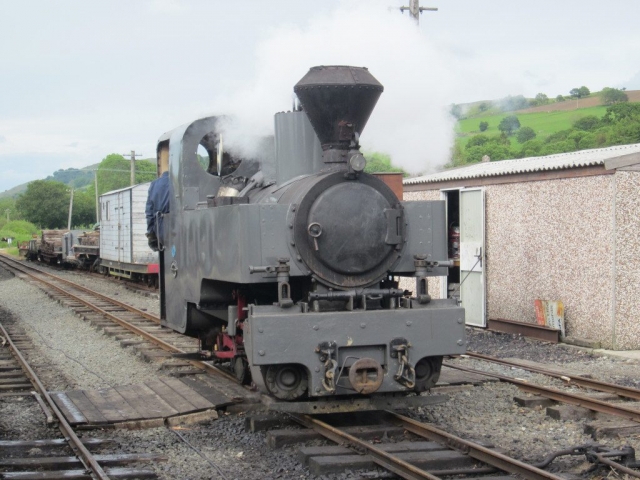 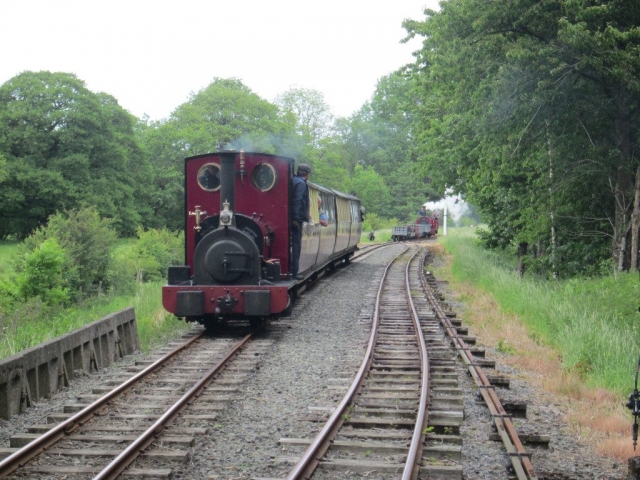 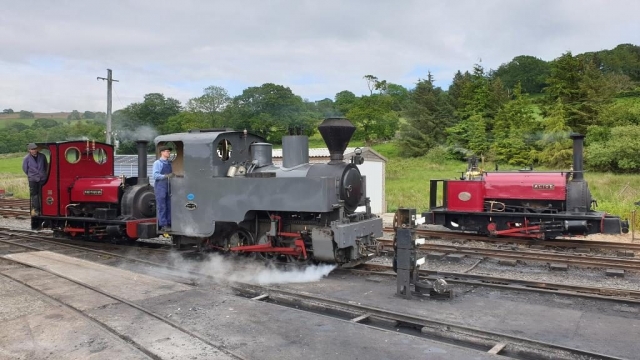 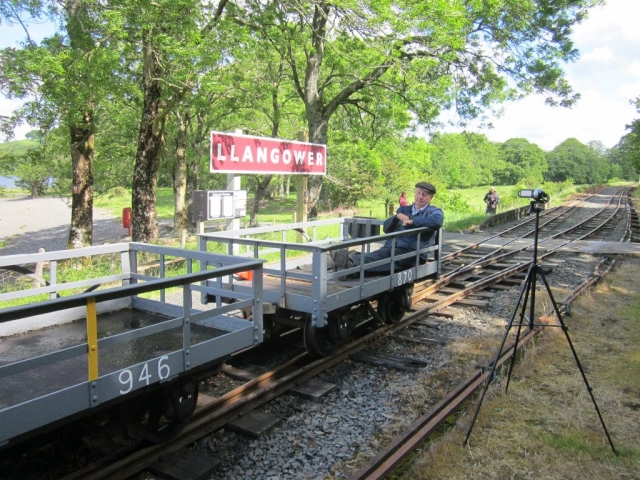 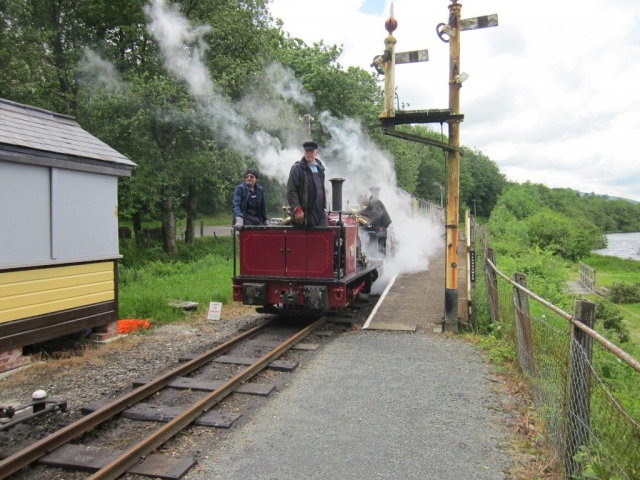 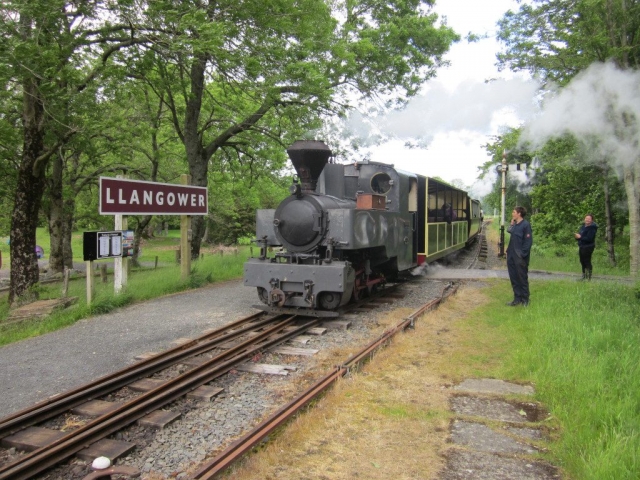 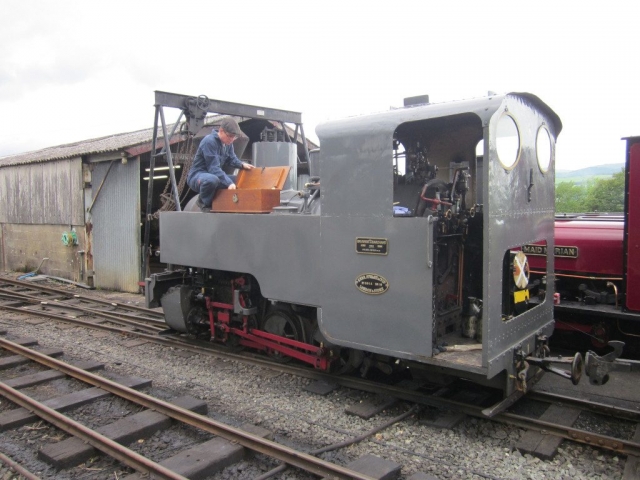 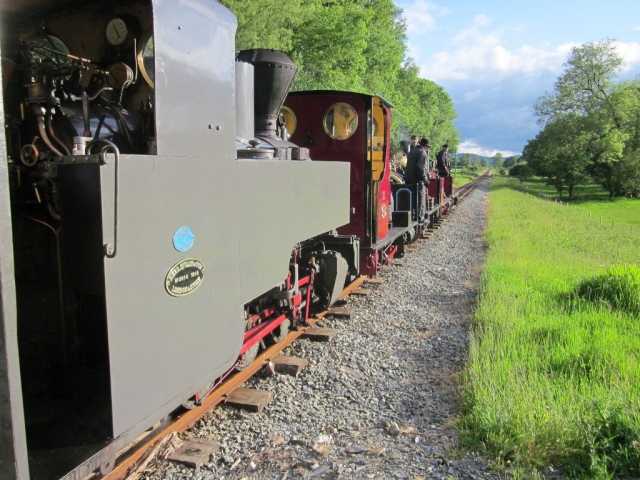 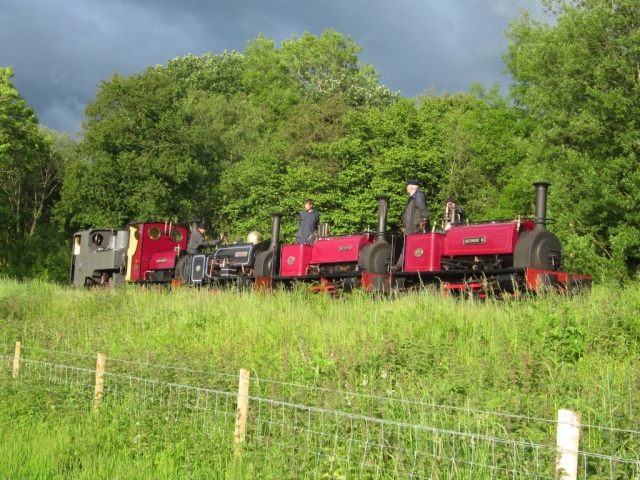 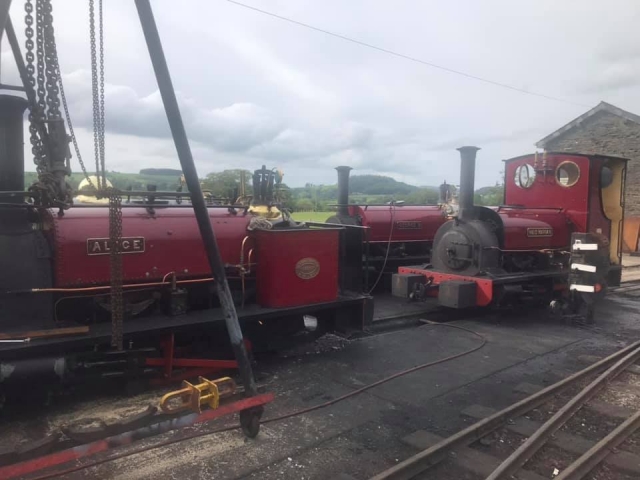 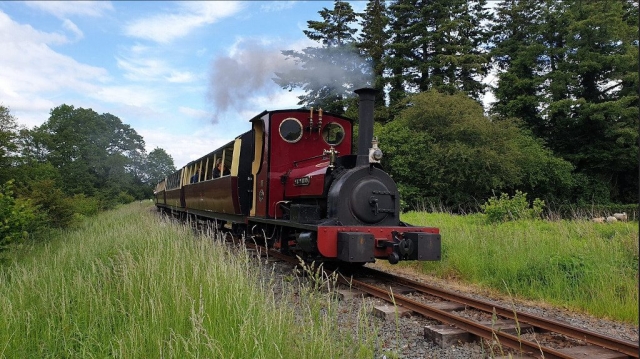 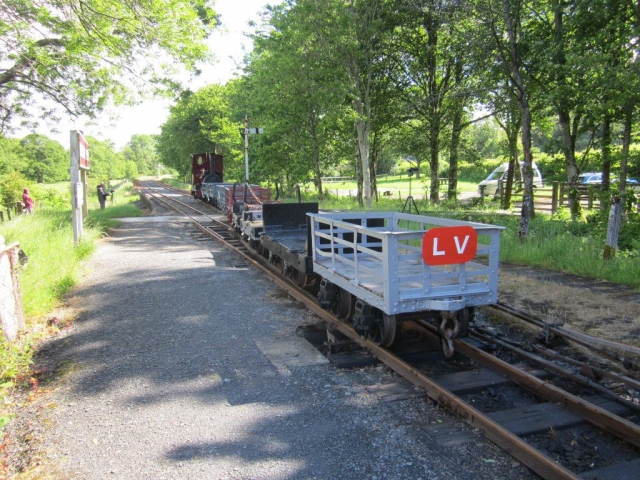 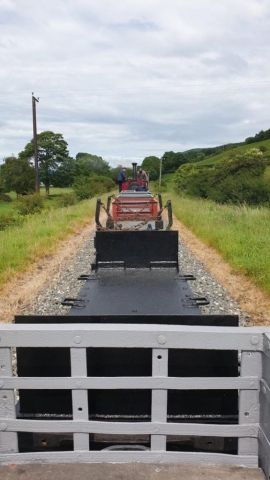 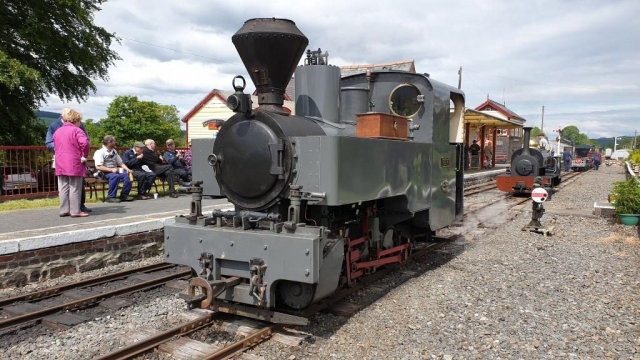 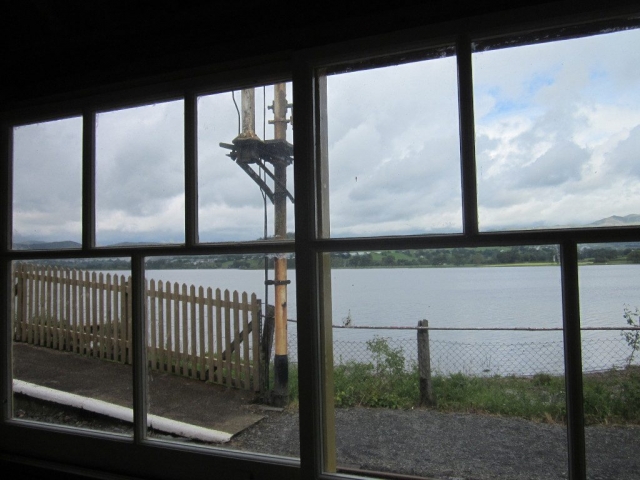 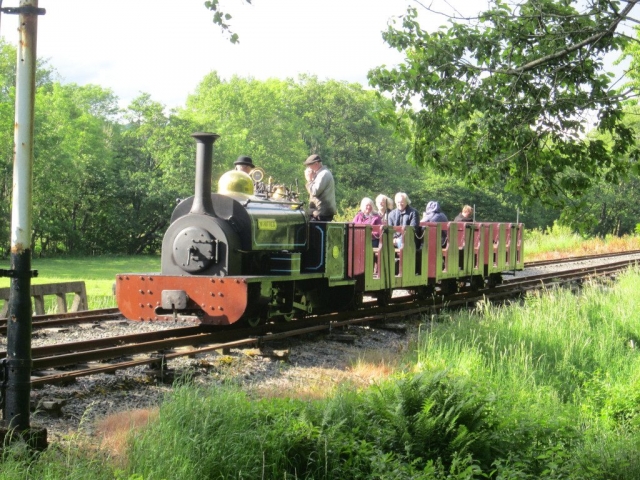 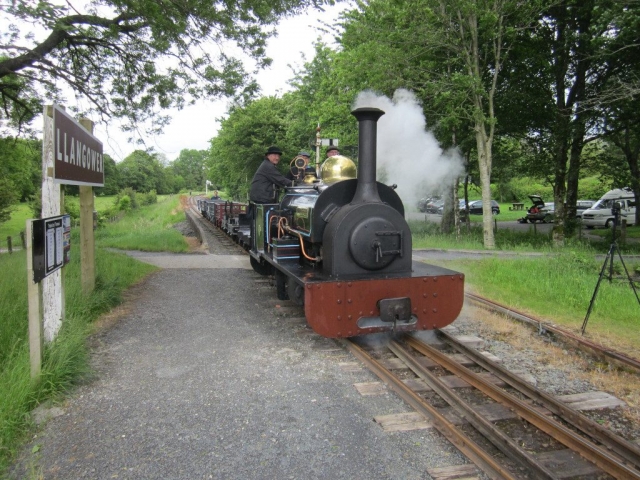 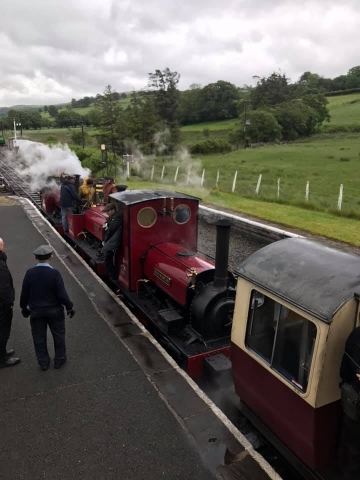 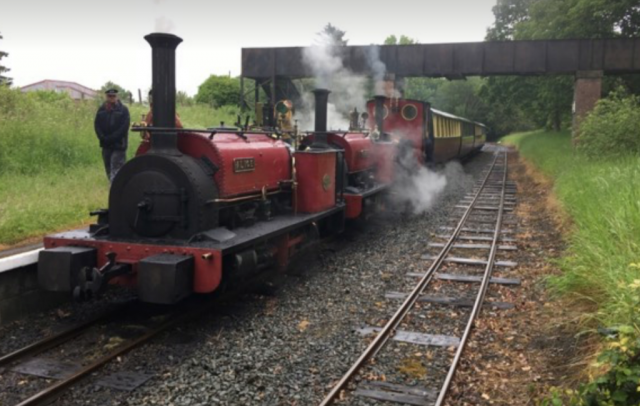 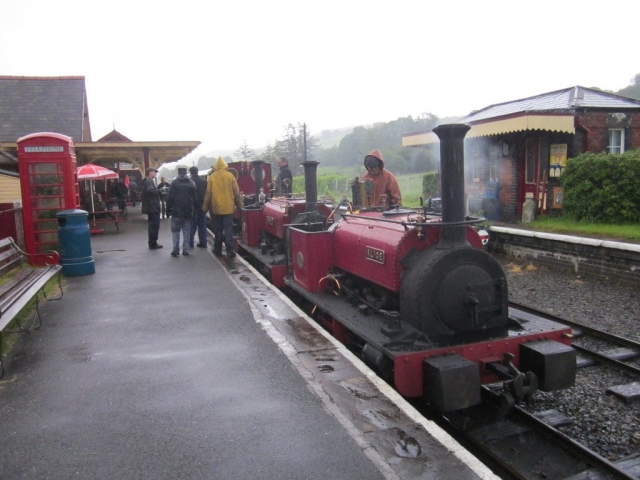 What they also loved is a new BLR tradition on Gala weekends, namely the ‘Llangower Three Train Shuffle’. The unfortunate signalman at Llangower Loop, on this occasion Tim Williams, had to accommodate two passenger services arriving from opposite directions, which is easy enough, but with the photo-freight in the mix too. Very accurate train control from the three drivers, combined with excellent timing on the part of the over-worked signalman, meant that the photographers, as well as those armed with video cameras and not forgetting the numerous bystanders, had a proverbial ball. There will doubtless be some excellent clips on YouTube and other media. (Anyone with a copy of Mac Hawkins’ S&D – Then and Now should take a look at the first anecdote on page 193. Ed.).

As always, we send a huge note of thanks to all the staff and volunteers who helped to make the Gala such a success.

Friday 28th June was a non-running day but there was hurried activity at the loco shed for the best of reasons.

The Bala Sailing Club, c/o Commodore Steve Pooley, was playing host to BBC Sport who, in turn, was featuring the preparations of Catherine Pendleton, a remarkable long distance ice swimmer who is training to become, next year, the first woman to swim a measured mile in not only the Arctic but also the Antarctic, and this without the protection of a wetsuit or grease covering. Bala Lake was deemed an ideal location in which to train, with suitable atmosphere and low temperatures, and having seen activity on the BLR in previous days, we were asked if we could help. A fire was rapidly lit in Winifred and with the Penrhyn quarrymen’s coaches in tow, she set off to provide background assistance. A drone was flown to record the scene.

Our Locomotives are performing very well although Holy War is still in the middle of her massive ten year strip-down. This is obviously a highly detailed operation with everything being taken apart and inspected, thus we will report when she starts to take shape again.

Our recently arrived diesel, John Murphy, is seeing regular use and is now sporting a fetching shade of deep blue with yellow ends. While she is acquiring many coats of primer paint, it is yet to be decided exactly what her final combination will be. To be continued.

The Penrhyn Coach is nearly completed and we show photos of her finished interior, complete with curtain poles. You will recall that this is a single-handed creation by David Hale and it is hoped to transport the coach from Somerset soon. However, the axle boxes still need to be made with the vital ball races to be ordered. 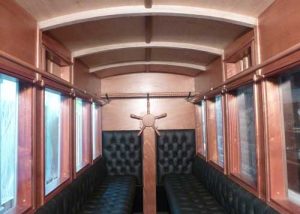 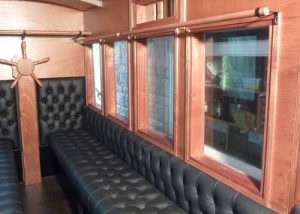 The President of the BLR Society, Peter Miller, has launched the President’s Appeal for Llanuwchllyn Signal box, which is most distinctive but needs some renovation. Please see the section on the our website which gives details of how donations can be made. However small or large, we are grateful for any donations to carry out this vital work on the signal box which, apart from its vital importance, gives so much pleasure to visitors who are readily invited up to see the workings and how trains are signalled at Llanuwchllyn. Click here to find out more.

The Carriage & Wagon team of Geoff Hodgkinson, Andy Grimshaw and Rod Fairley has had a busy month in which they completed the refitting of the new Llanuwchllyn running-in board although they need to recast the letters Y and W.

The order of Sapele wood has arrived and a start has already been made on the repairs to Llanuwchllyn signal box, with the gable end above the steps being the first area to benefit from their expertise.

Andy has completely re-floored one of the low floor coal wagons and, although there was no pressure, he was soon advised that it was required for the imminent delivery of coal!

The BLR, or rather its ready band of volunteers, has been Out and About in June and there was good attendance on the BLR Trust Stand at the Statfold Barn Railway open day in June. Tim Williams, Dave Rutt, Julian Birley plus membership supremos Martin and Cathy Houghton, who had journeyed over from Suffolk, manned the Trust’s stand at the popular event. Lots of positive conversations took place and many visitors were most interested in the Extension Project and its progress. At the end of the day, about £700 had been taken in donations and sales of railway items.

Just to prove that the devil is in the detail, our new Bala Station site, which was cleared months ago, was given a good mowing during the month, as our photo shows, after the naturally sown grass had grown rather enthusiastically. 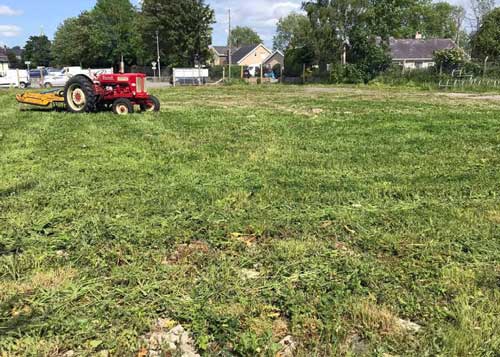 While we are not yet in a position to start building, neatness on the site shows serious intent. 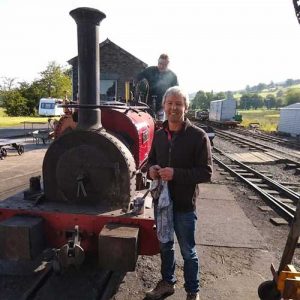 It is not every day that we can welcome an enthusiast from the other side of the globe but Haydn came to visit the railway and, in particular, to inspect Alice as he has a five inch gauge version back in Christchurch, New Zealand. Needless to say, he was rapidly welcomed and then promptly put to work on her which finished with him lighting her up! He loved it, as the photo shows.

As the last part of Out and About, the Bala Swimming Club asked the railway to help with the annual swimming race along the lake, a distance of nearly three miles from Llangower pier to the beach close to Bala Leisure Centre. The management leapt into action and the participants boarded a train at Bala which took them to Llangower Halt, thus getting them all in a positive (waves) frame of mind. The train was right on time, the conditions on the lake were good, if not exactly warm, nobody had to be rescued and the whole event was such a success that the Club has booked the BLR for next year. Even ‘Teggy’, the fabled creature of the lake decided to keep her distance and not bother anybody.

The annual meeting of the Bala Lake Railway Trust took place at the very end of May and we show a photo of this learned gathering so that faces can be put to names. As we will see, this august group comes from very varied professional backgrounds but the combination of the talents available is impressive to say the least and they are all working on our/your behalf. From left to right, we see Steve Davies, Julian Birley, Christina Kennedy, Toby Watkins, Roger Hine and Steve Valentine. Here is some brief information on each member. 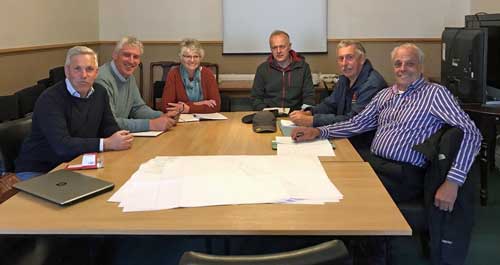 Julian Birley BEM. As Chairman of the Trust, Julian needs little introduction as he has been heavily involved in heritage capital projects for nearly a quarter of a century and these have involved preserving important buildings, restoration projects, fund raising, not forgetting his remarkable achievement of repatriating three locos from the Indianapolis Museum after others had summarily failed. He also writes a good story and his latest work, Winifred Comes Home, a heartfelt story of tenacity and subtle persistence, is available either at Llanuwchllyn Station shop or on our website. It is of note that this exercise was completely self-funded and all proceeds from the book sales go to the Trust. He lives ‘over the shop’ near Llanuwchllyn.

Christina Kennedy. Making perfect use of her Masters Degree in Business Administration, as well as other qualifications, Christina has run her own business consultancy for over 25 years, covering various aspects of business such as manufacturing, leisure and service companies. She has also been heavily involved in the Midland & Great Northern Joint Railway Society, the North Norfolk Railway and the Locomotion Conservation and Learning Trust, so her understanding of heritage railway requirements is acute.

Toby Watkins. Having a particular flair for acquiring Lottery and other grants for various projects on different heritage railways for which he has worked, Toby leapt at the chance to join the BLR Trust. His ‘day job’ has given him extensive experience in the management of large and complex infrastructure logistics. Being a keen railway volunteer for 30 years as well as having an MA and MSc in history and conservation means he is perfectly suited to the Trust’s requirements.

Roger Hine. Starting at Rediffusion East Midlands, Roger enjoyed a distinguished career, the culmination of which was being responsible for the installation and commissioning of the flight information display system at Birmingham International Airport. After Rediffusion, Roger moved to North Wales and developed his own successful electronics and model-making business, specialising in 16mm scale narrow gauge battery powered locomotives. He started volunteering at the Bala Lake Railway and in 1991 was appointed Chief Engineer which was followed, in 2001, by his appointment as General Manager. He retired in 2014 but has continued building bespoke 16mm gauge models to customers’ requirements, as well as becoming well known for his considerable skill in watch and clock repair.

Steve Valentine. A relatively recent arrival as a trustee for the BLRT, Steve is a highly successful businessman and is perfectly placed to keep a finger on the pulse of the local business community as he owns and runs an award-winning confectionery company in Bala which is also the town’s largest single employer.

And finally….. here are some important dates for your diary.

A Day with Alice takes place on the 27th July, an annual event where the author of the delightful books on Alice, Winifred and others, Pauline Hazelwood, is on hand to read stories, talk to visitors and sign copies of her enchanting books. The real Alice will be there too, of course. As always, Pauline will have her easel set up to record whatever catches her attention at the station.

Barbeque Specials are scheduled for the 1st, 8th and 15th August, with full details and booking arrangements on the website. The local butcher will be serving his locally sourced quality barbecued beef-burgers and hot dogs at Llangower after a suitable run down the line and the atmosphere is completed by watching the sun go down across the majestic lake. It is an occasion not to be missed.

The Mini Steam Gala will happen over the weekend of the 24th – 26th August, although quite why it is titled ‘mini’ is a mystery as everything that will steam will be on duty, hence expect multi-heading plus another evening cavalcade. On top of that, there is the opportunity to drive one of our locos under the banner ‘Driver for a Fiver’, an experience not to be missed.

There is a lot happening and all information is on the Bala Lake Railway website. We look forward to seeing you.