It was another successful month for the BLR, and a decidedly warm one as well. While the national rail network suffered the usual problems with over-heated rails and other temperature related ailments, the BLR continued on schedule and the extra vigilance and care from the loco crews avoided anything untoward. We employed the logical precaution of sending the Wickham Trolley on an inspection run down the line well before the first scheduled train, a useful tactic that a couple of BLR Members will recognise from new car press launches. Obviously, a morning run is in cooler temperatures than late afternoon when problems might occur but it was nevertheless expedient to check the line anyway just in case.

As for the monthly figures, July was almost identical to the same month last year but we are still ahead of the year to date figures from last year.

Google reviews count for a lot and we have been deluged by many 5-star comments this month, with the overall average finishing on 4.5, which is of great encouragement for all staff and volunteers who work so hard to make it all happen. One word that we noticed most frequently was ‘friendly’. Smiles and courtesy cost nothing.

The Carriage & Wagon Team has been busy on the refurbishment of the signal box, funded by the BLR President’s Appeal which achieved its target very quickly. One of the team, Rod Fairley, takes up the story; 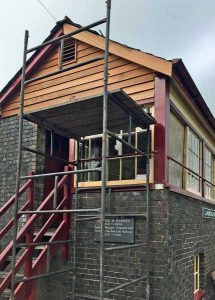 We have completed the fascia boards on the gable end. Removal of these barge boards highlighted that the slates were glued to the old ones!

Next on the agenda is to make new barge boards as well as improving the way the slates are attached! Our ‘In-House-Carpentry Team’, Andy, Rod and Geoff, are really pleased with the way the work has gone so far.

A lot of thanks should be given to Andy’s climbing ability and head for heights as the other two are no good at climbing.

The team received a lot of comments from passing passengers about the great work being carried out as well as the beauty of the countryside. They were not wrong.

We have talked about the Penrhyn Coach many times in the past but the end of July saw a milestone passed. This one-man magnum opus, created by David Hale, is almost identical to the coach built for Lord Penrhyn and which is exhibited in the Penrhyn Castle Museum.

On the 29th, the Coach was finally moved from David Hale’s house in Somerset. David had ingeniously mounted sizeable castors on the underside to facilitate moving the Coach out on to his drive where it was then lifted very carefully on to a large truck. It arrived in Llanuwchllyn late afternoon to the delight of all, particularly the normally camera-shy Julian Birley who commissioned this amazing creation. It was moved on to a flat wagon as it still awaits its axle-boxes but on receipt of those, they will be fitted and the coach will then be introduced to its wheels. Our photo montage captures the early morning activity, including skilfully avoiding the overhead power lines in the village as well as its arrival at Llanuwchllyn station. It was quite a day. Needless to say, it is currently in primer. 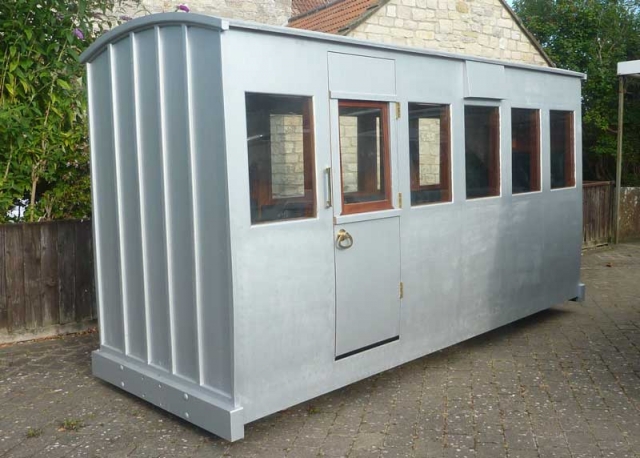 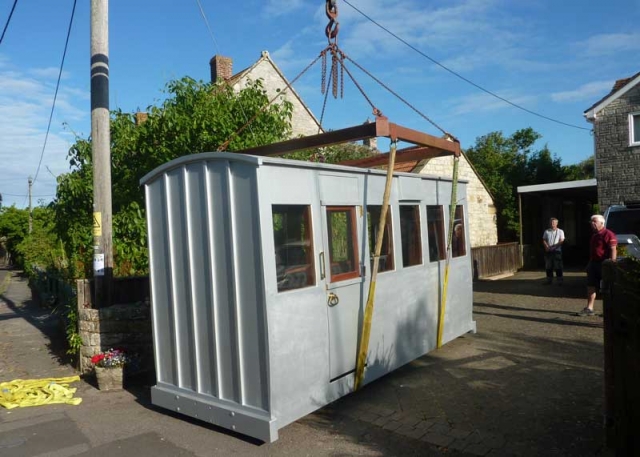 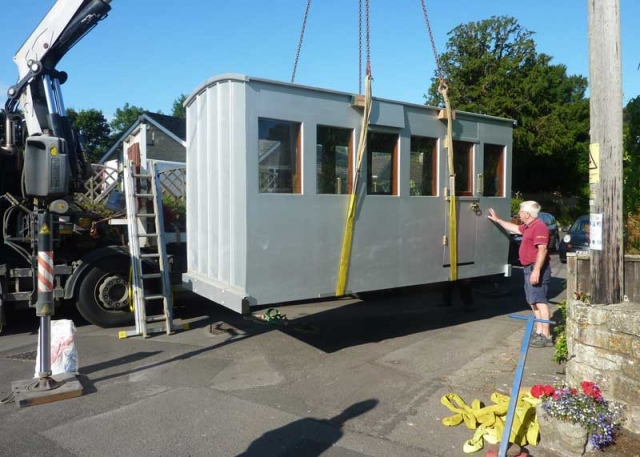 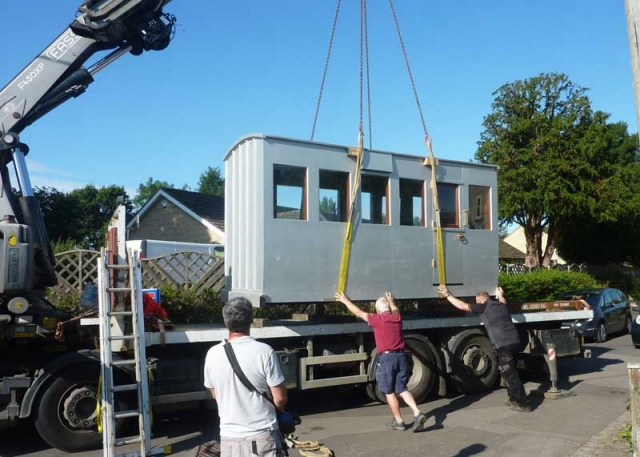 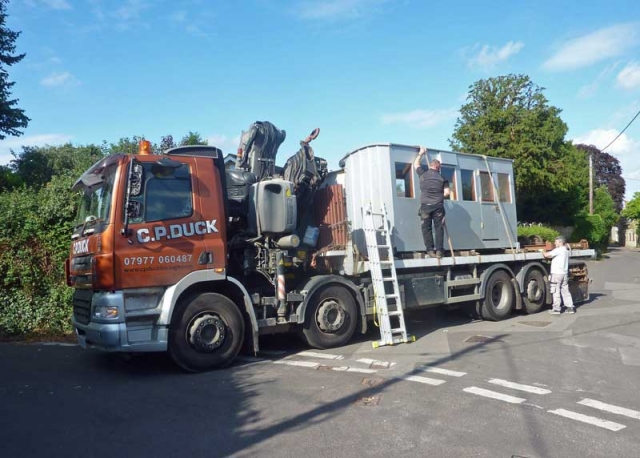 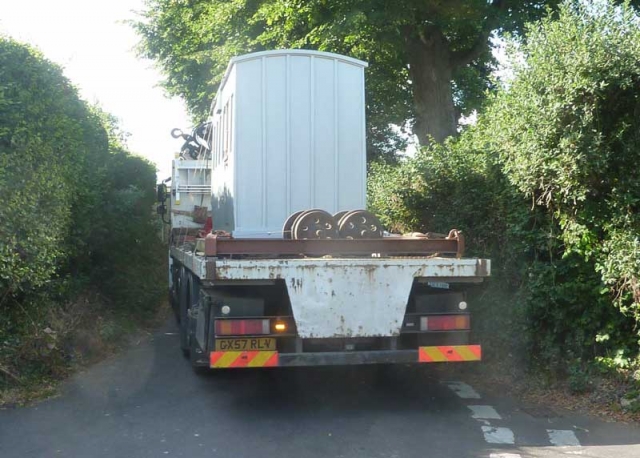 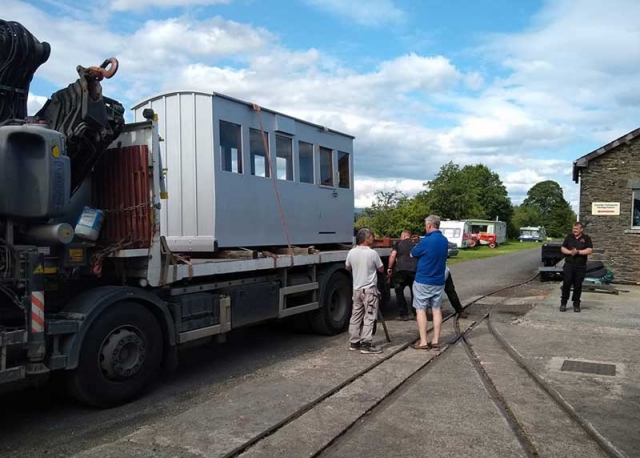 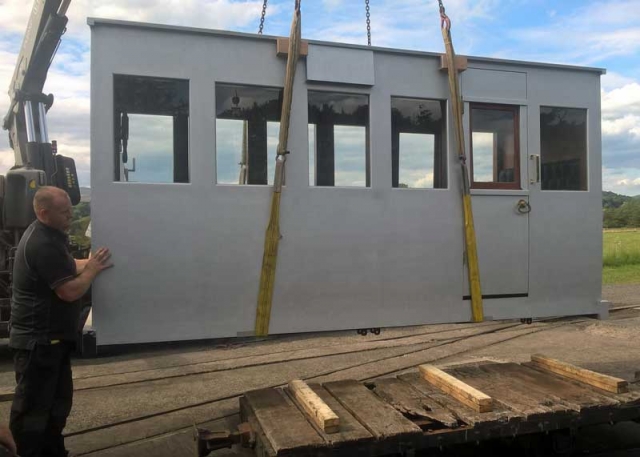 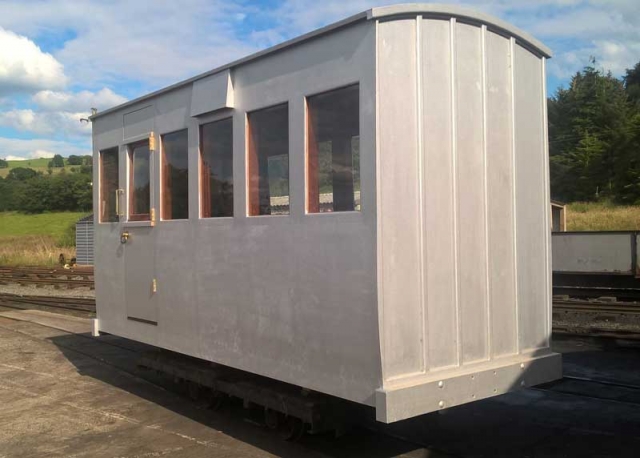 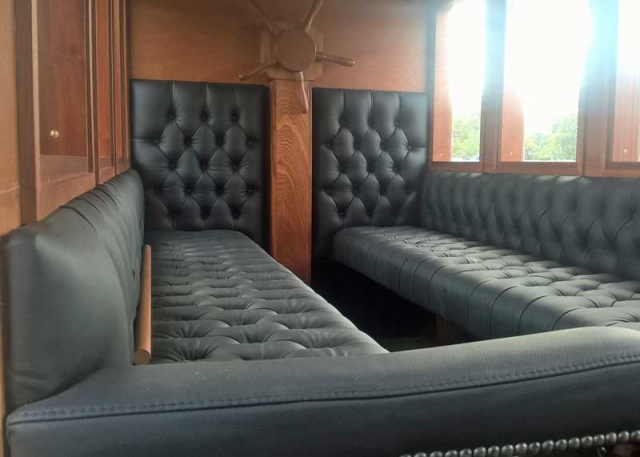 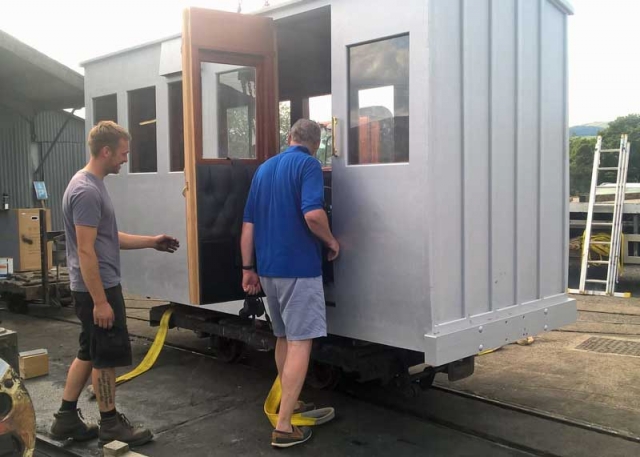 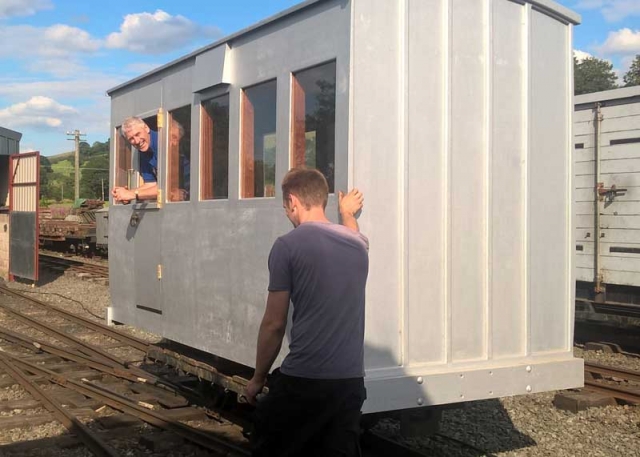 Our volunteers come from a wide variety of backgrounds and we were delighted to welcome, for a week during July, Anthony Coulls who is very well known in the world of heritage railways and preservation. He is Senior Curator of Rail Transport and Technology at the National Rail Museum and is also an author of note, his latest work being entitled Slate which is selling well, capturing as it does the wide and fascinating history of the slate industry, not just in Wales but all across the UK. Needless to say, it is an excellent read. Published by Amberley Publishing of Gloucestershire, this book is now widely available, from the Llanuwchllyn Station shop as well as other leading retailers. 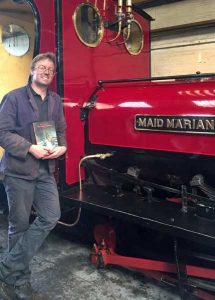 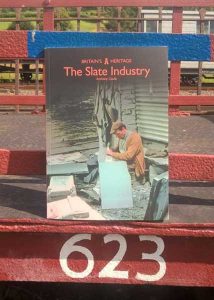 Our annual Alice Day took place on the 27th and was a great success. The weather was kind if not totally sunny, author and artist Pauline Hazelwood was on sparkling form and was frequently surrounded by admirers of all ages. The subject of the day, our own Hunslet Alice, was on form too and was delighted to pose with a little girl of the same name, as our photo shows. The trains ran close to capacity all day and the platform and café were busy with happy children and parents. Alice gave rides for much of the day with the Dinorwic Yellow ‘Royal’ coach, pleasing children both large and small. A great day was brought to a close with Alice and Winifred ‘top ‘n tailing’ the final train. 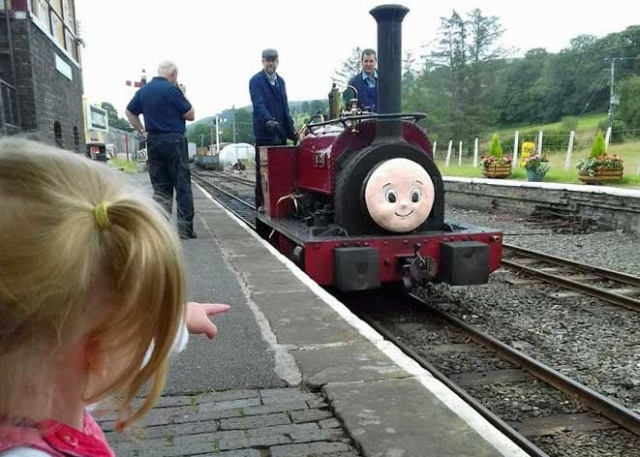 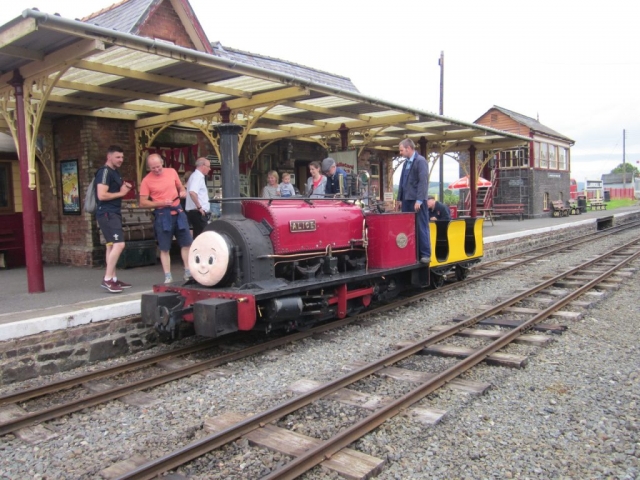 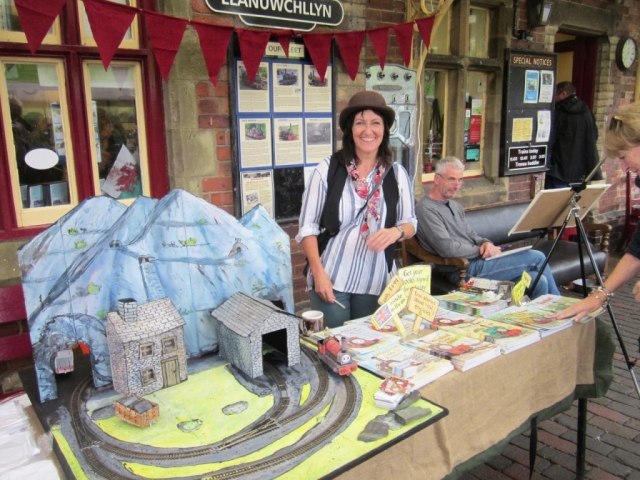 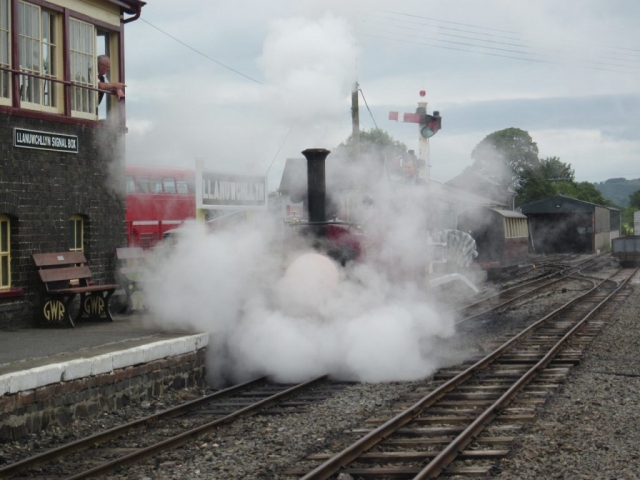 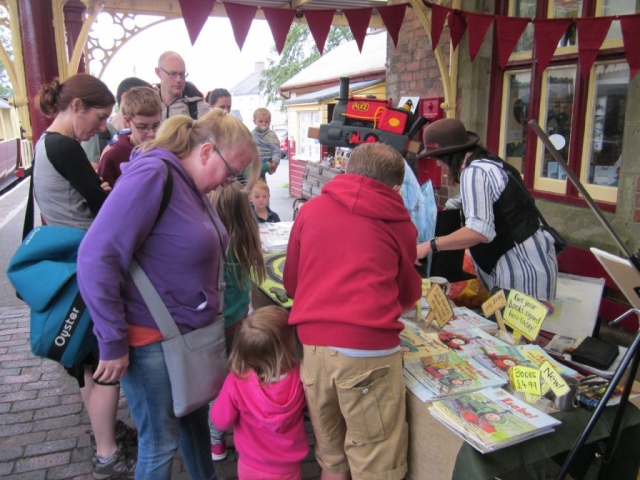 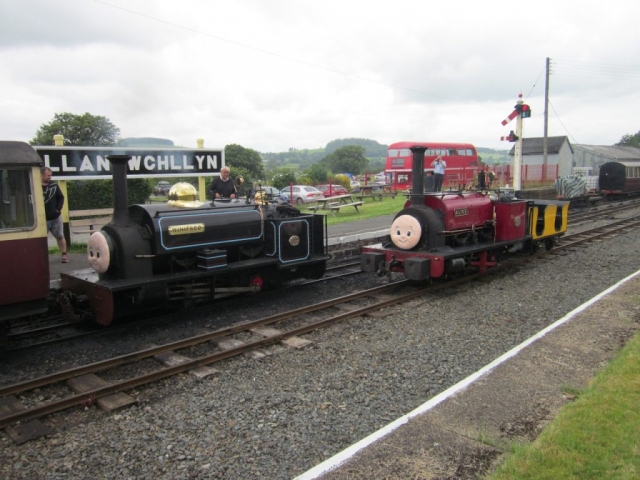 We have mentioned our Webcam which is set up to cover the platform at Llanuwchllyn Station and this is a relaxing way to pass a couple of minutes in the comfort of home during the holidays. Leaving aside the Llangower special webcam service on Gala weekends, the station’s permanent camera can spot all sorts of activities and apart from the regular trains coming and going, one can also spot signalman Bernard Allman filling the bird-feeders between trains to satisfy the requirements of our resident ravenous and raucous hordes, plus occasionally spying someone eating a locally-sourced ice-cream when he should have perhaps been elsewhere…

Little escapes the eye of regular viewers and, even if there is little activity, it captures the atmosphere of the railway to perfection – even in the (occasional) rain. It is so easy to find via our homepage.

Forthcoming Events for the diary fall into two categories.

The BLR evening Barbecue trains have once again been proving popular as these give a perfect opportunity to ride the railway in the glow of the evening sun, followed by a tasty barbecue by the lake at Llangower. The last of the series this year will take place on Thursday, 15th August, a date not to be missed if you are in the area. There will be beer, wine and soft drinks available on the train.

Now available through our website are Day Rover Tickets for our August Mini Gala over the Bank Holiday weekend. The Gala will see all four of our available engines in steam, plus there will be demonstration freights, a chance to drive an engine in our Driver for a Fiver, some double-heading, our increasingly popular ‘Three Train Shunt’ at Llangower passing loop (look out for the special webcam), a miniature railway and society stands at Llanuwchllyn plus a free heritage bus ride into Bala. With all this to look forward to, please check this website for the latest details.

And finally……. as an example of pure attention to detail, we show a photograph of Holy War, still in a state of undress during her ten-year strip-down but now with her frames painted in a most alluring shade of red. Her end-stocks have been removed and rebuilt, new specific bolts have been fitted and the frames have been shot-blasted to bare metal and repainted. Sadly the radiant red will not be widely seen after she is rebuilt but the care and attention she is receiving will last well beyond the ten years before her next strip-down. 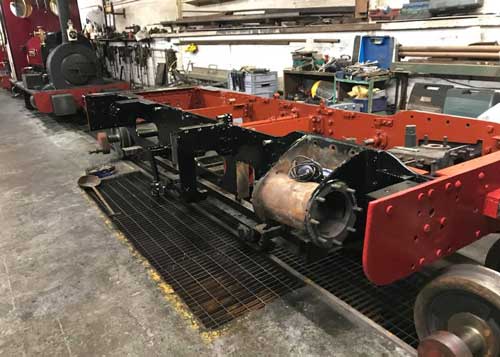