We lead unashamedly this month with a most encouraging email in the latest issue of Steam Railway magazine where the writer visited ‘a large railway in the Midlands’ and complained of the surly, unhelpful treatment he and his family received. His email then continued;

By complete contrast, we are regular visitors to the Bala Lake Railway – what a difference. Everyone is happy, smiling, well-dressed and willing to explain things, be it a young lad clearing out the ash pit, drivers, signalmen.

This is why the likes of the Bala Lake, North Yorkshire Moors, Severn Valley and Ffestiniog & Welsh Highland railways will prosper.

Courtesy and smiles cost nothing but achieve so much.

The 2019 operating season on the BLR has proved to be a resounding success with overall figures for the year to date being up almost 2% on last year, which regular readers will recall was the railway’s best yet. Passenger numbers during September continued to be pretty buoyant, helped by a dose of warm sunny weather during the middle of the month that brought the crowds out, and quite a few group visits making the most of the early autumn weather .

The summer schedule of trains has now ended and October will feature only Thursday running. However, from the 26th October, there will be regular daily trains until the 2nd November, with the 26th and 31st being full of fun and frights on our Halloween Specials. Our website is open for bookings on these 17.15 and 18.30 Specials – if you are brave enough! Click here to go to the page for this event and to book online.

In the meantime, preparations are in hand for the winter tasks that every railway needs to deal with, loco and rolling stock maintenance, permanent way items to be addressed etc. and our photo shows a wagon-load of neatly stacked sleepers in readiness for more track relaying by the Wednesday Gang and other groups of volunteers over the winter period. 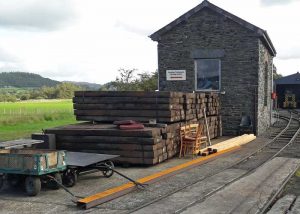 If ever there was a perfect example of a local organisation getting solidly behind the BLR’s quest to get to the new station site in Bala, it is the Bala Badminton Club, one of whose members is Lois Jones who has, over the last six years, been working seasonally in the station café in Llanuwchllyn. Inspired by Lois and her mother, Nia, the Club organised a sponsored 24-hour static cycling machine marathon to raise funds not only for the BLR Trust but also for another chosen charity.

Members took one-hour turns on the machines in order to cover the total ‘distance’ from Bala to Cardiff and back, but such was their enthusiasm that they only just missed achieving a double return trip distance, a brilliant result. Almost £2,000 was raised in total which the Club rounded up to exactly £2,000 so that it could be split equally. Our photo shows Lois Jones with her mother and other members of the team presenting the cheque to BLR General Manager, David Jones, in front of Hunslet George B which was crewed on Wednesday 18th by Tim Gregson and Richard Green. 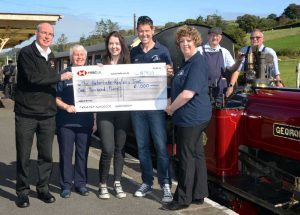 On accepting the cheque for £1,000 on behalf of the BLR Trust, David Jones said;

I would like to thank the Club for their superb fundraising effort. The money raised will be going towards the extension of the railway into Bala Town, and it is absolutely fantastic that part of the local community in Bala has raised such a large sum of money towards our goal which will not only benefit the railway but also the town of Bala.

Julian Birley, Chairman of the BLR Trust, who is spearheading the extension project and who sadly could not be present because of Trust business elsewhere, said;

The support which we have had for extending the railway into Bala Town has been overwhelming, with donations coming from all over the country. But it means so much more to us to see how the local community, and in particular the Bala Badminton Club, has got behind our plans and gone to so much effort to raise this money. I cannot thank them enough.

Perhaps the most heart-warming aspect of this episode is that the initial idea of raising the money came in part from Lois Jones, and is therefore a testimony of how much the Bala community is really behind this exciting project.

Part of the Trust business that took the Chairman away was to assist fellow Trustee Steve Davies in organising the removal of over 2,000 feet of rail and fixings from the East Lancs Railway, who had offered the rail for the Bala extension in return for a very modest donation. Thanks also to the generosity of Ainscough Industrial Services who provided the transport entirely free of charge, four articulated lorries arrived at the site of the new station in Bala early one morning to offload the rail into storage until work gets under way. It joins the points obtained earlier from the Lynton & Barnstaple Railway and provides enough rail to cover most of the distance needed. Another major step forward for the project. 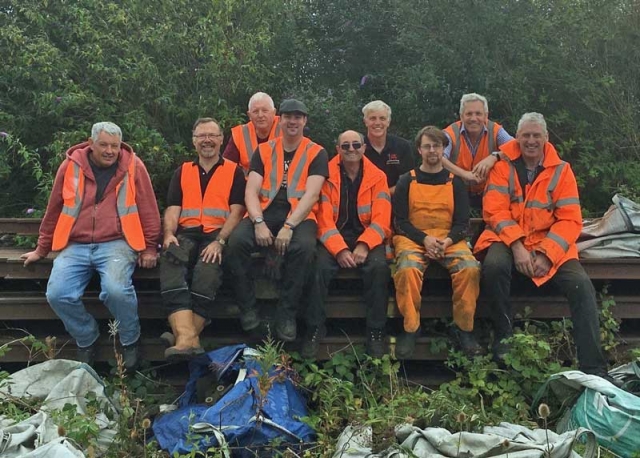 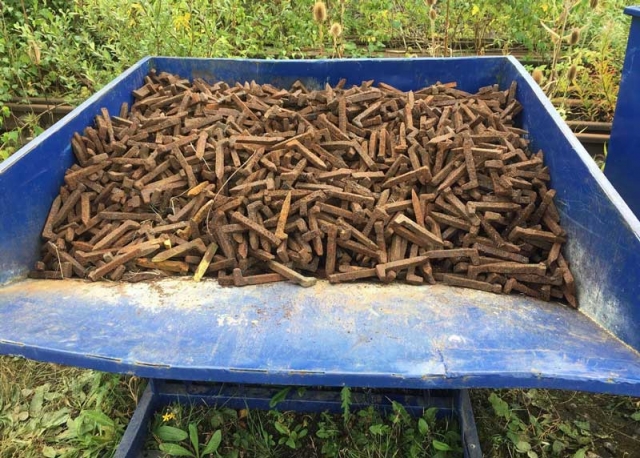 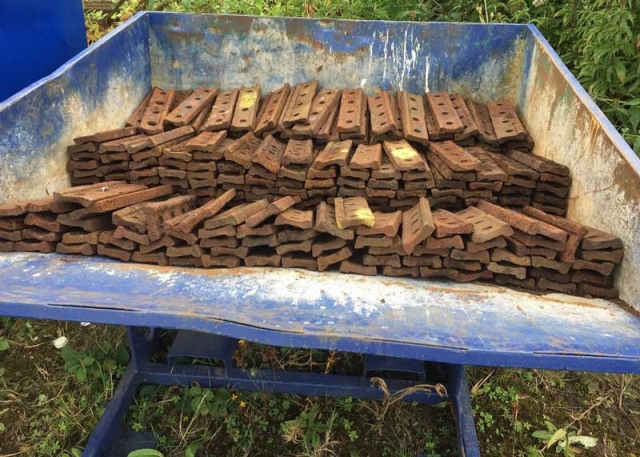 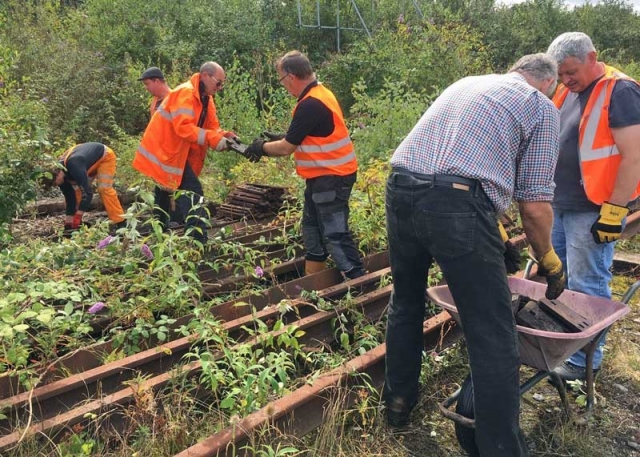 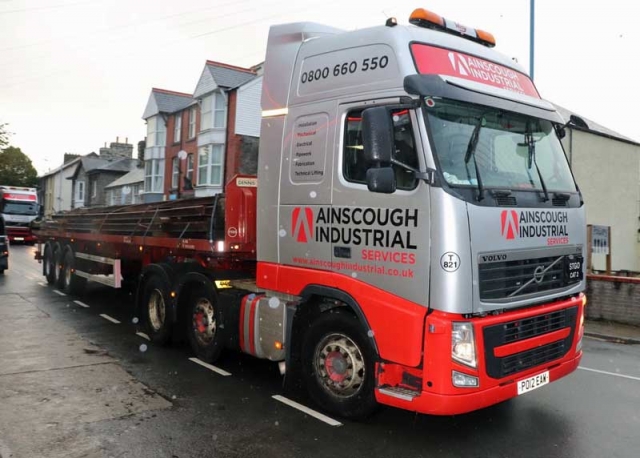 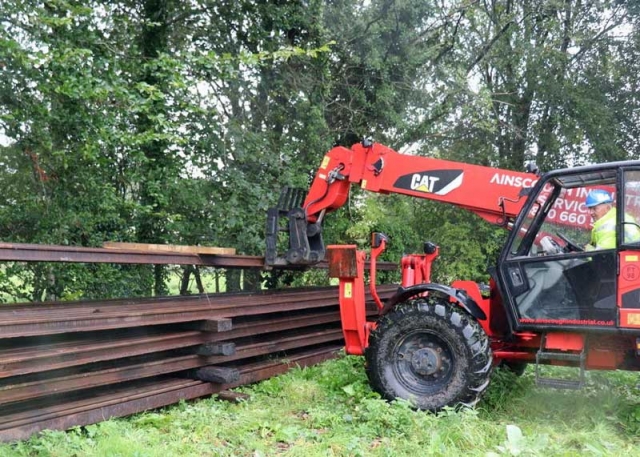 The BLR Trust is also delighted to announce that following on from the wonderful Gold Subscription donations totalling £12,000, two of £6,000, which we received in August, the Red Dragon Appeal has now raised over £40,000, thanks to three new subscribers in the last month, for our project to extend the railway into down-town Bala. This extension project really has the proverbial bit between its teeth and as news spreads, so does the public’s awareness and support, as we have seen. Long may this upward trend continue.

As we have previously reported, the Penrhyn Coach, the magnificent recreation constructed by David Hale, arrived at Llanuwchllyn in August and has now received its first coat of primer paint prior to the serious business of top coats being applied over the winter. The final choice of colour will replicate that of the original example in the Penrhyn Castle Museum, namely a most dignified deep blue. While the current roof is totally waterproof, the final covering will be one of the last items to be addressed. 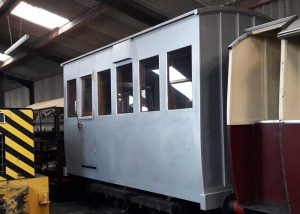 In the meantime, the new axle boxes arrived on September 17th. BLR Director, Julian Birley, who commissioned the Coach, commented;

John Gartell, of the Gartell Light Railway near Templecombe in Somerset, has organised the building of the axle-boxes and kindly delivered them himself. The workmanship is truly outstanding and everyone at the BLR is raring to go so that the Coach can finally be united with its wheels.

Under the heading of Graduations, there has been a trio of names qualifying in certain areas this month.

Firstly, Peter Newhouse passed out as a fireman at the beginning of the month. Peter has been a most regular volunteer for quite a while and his elevation will swell the ranks of firemen available for roster.

Two new guards qualified in September, or more accurately re-qualified, as both Francis Stapleton and Chris Jackson have been involved with the BLR since its creation in 1972 so their appreciation of the line goes without saying. Francis is already re-qualified as a fireman but with time on his hands, as he so delightfully put it, he decided to re-train as a guard as well, an occupation much appreciated by the management.

What’s in a name? Further to our Rail Miscellany section last month on the unofficial names of various locations along the line which are known only to members of the BLR Wednesday Gang and other volunteers, an email rushed into the editorial office enquiring about the meaning of the name, Pentre Piod, our little halt between Llanuwchllyn and Llangower which is also accredited as having the shortest platform on any UK railway. Rarely has an innocuous name prompted such wide-ranging opinion and discussion.

Initial enquiries across quite a spectrum produced a variety of theories. Firstly, it was alleged that the name meant simply ‘village’ (Pentre) ‘of many magpies’ (Piod) which sounds plausible except that the closest village is about two miles distant and the only sightings of magpies have been of those passing through.

Another theory was that Piod could mean ‘What?’ as in ‘What Village?’ which is equally plausible bearing in mind its remoteness in the surrounding verdant landscape.

However, noted historian and BLR Director, Dr David Gwyn, waded into the discussion by commenting that ‘What Village?’ would actually be translated as ‘Pa bentre?’ Likewise, ‘Whose village?’ would be ‘Pentre pwy?’ which is closer to the current name but he expressed reservations about it meaning a remote houseless location populated solely by loitering magpies although it would seem to be the obvious translation.

He then forwarded the following; ‘Pentre Piod appears in the 1838 Ordnance Survey and in Robert Jones’ Clustnodydd neu Gydymaith y Bugail of 1968. Another source suggests it is a compound of Pentrecogwm (village/place of cones/ crab-apples/egg-shells/ shells/ limpets) and Penrhyn, meaning promontory’. This is an interesting detail as there is indeed a small promontory nearby in the lake.

He also suggested, as a delightful digression but nevertheless continuing the history theme, that the theory of the English name for Bala Lake/ Llyn Tegid, namely ‘Pimblemere’, is an attempt to render ‘five parish’ (pum plwyf) + mere. As a codicil and by way of gently stirring already rippled waters, Tegid is derived from the Latin personal name, Tacitus, this being a most relevant point because the Romans were very busy in this area of North Wales, as any study of a local OS map, in particular 1:50000 no. 124, will reveal.

One pragmatic correspondent asserted that the whole problem and ambiguity of the meaning of Pentre Piod is probably linked to the inscrutable and unfathomable cunning of the Welsh to confuse and discourage any foreigners, who might have had the temerity to wander inadvertently across the border, from getting any idea of exactly where they were. 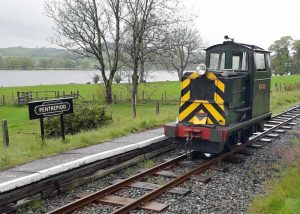 And finally……. while on the subject of meanings, another enquiry asked about the BLR works bogie wagon, always referred to as the Catoflat, a most useful piece of rolling stock which accompanies almost every work train. Its format is simply a tiny ‘room’ at one end containing minimal seating but the essential cooker, mainly used for brewing vast amounts of tea, then the tool/equipment store in the middle with a flat area at the other end for carrying supplies such as sleepers. Thus you have an acronymic name, CAboose at one end, TOol store in the middle and FLAT area at the other. Incidentally, this wagon is currently undergoing major refurbishment prior to the start of the winter works programme. 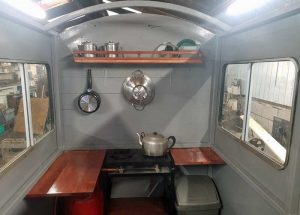