After the end of the ‘running’ season, you might imagine that all goes quiet as the railway goes into hibernation but, if anything, life at the Bala Lake Railway over the winter invariably gets busier with lots of routine maintenance being scheduled along with mechanical upgrades in the loco shed. Other activities take place as well and this year, a stand was organised at the Warley Model Railway Exhibition on the 23rd and 24th of November, one of the largest shows in the country. Valued volunteer and inveterate modeller, Tim Williams, takes up the story.

The BLR took its publicity display to the Warley show for the first time where crowds are the norm and it also hosts the finalists of the Channel 5 show Great Model Railway Challenge. The BLR stand proved to be a great success on our first visit and the total revenue raised from all sales, including donations, was over £700. We spoke to a very large number of people about our railway, many of whom had not previously heard of us. It was an excellent profile-raising effort which is likely to be repeated in 2020.

The stand was organised by the BLR Society and supported by the BLR Company, the BLR Trust, the Maid Marian Loco Fund and Saddletank Books. In addition to items for sale, we exhibited a 009 scale model of a slate tip with Alice and Winifred shunting in the snow, a genuine Dinorwic wagon wheel alongside Holy War’s nameplate pattern and a replica plate.

The stand was staffed over the two days by volunteers Tim Williams, Neil Bates, Francis Stapleton, John Huxley, Liz Partridge, Steve Jones and the acclaimed author and artist Pauline Hazelwood, whose series of delightful books about Alice and her friends have proved so popular. 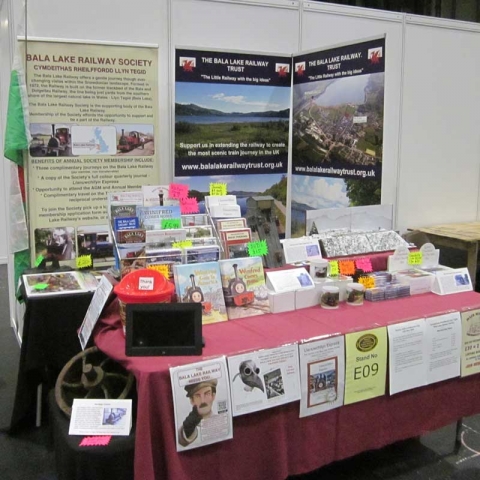 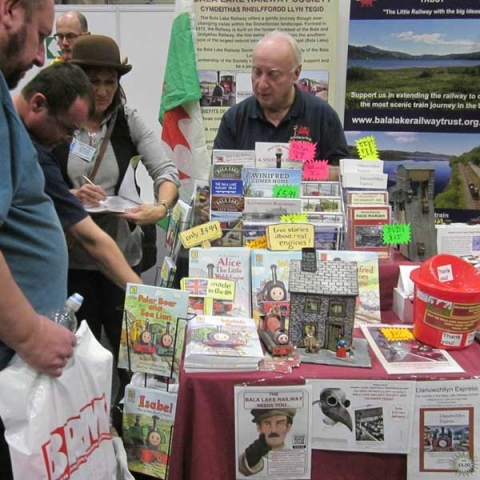 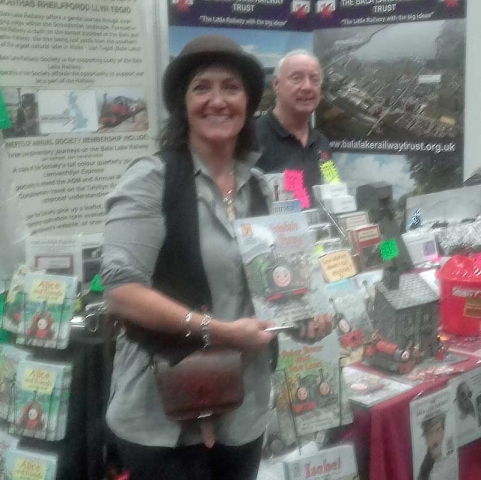 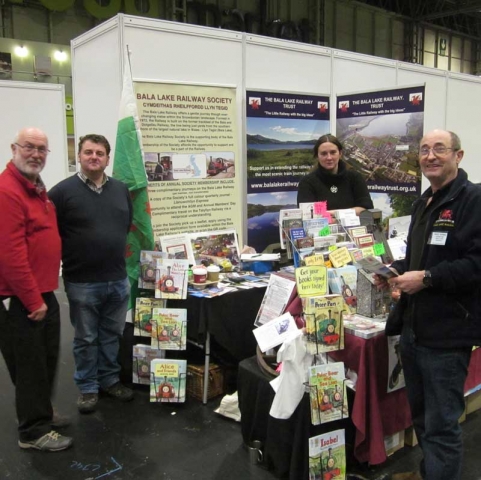 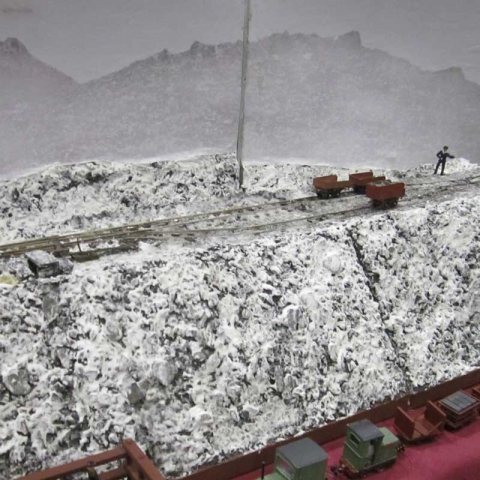 On the subject of exposure, and to illustrate how much moral support the BLR is receiving for the extension into Bala, we can reveal that the staff at Model Rail magazine have generously built and donated to the BLR a model of the proposed Bala Station to help with our publicity. The model was presented to the BLR by the magazine’s editor, Richard Foster, and will be on general display after the magazine has officially launched it, the BLR naturally acceding to their embargo request, and we will proudly show photographs next month. If you wish to find out how it was built, then get the January issue of Model Rail Magazine. Indeed, to illustrate the attitude and goodwill of all concerned with the extension project, Richard Foster himself donned his overalls and ably assisted the track gang for a few hours.

Locomotives enjoy serious maintenance over the winter period, but with the track relaying taking priority at the moment (more later), Holy War has had her axle boxes refurbished and her boiler is due to be sent away very soon for expert attention. Once the boiler returns, the rebuilding will start quickly.

The time has come for Alice to undergo her own 10 year strip-down and while her steam ‘ticket’ has yet to expire, she hauled her last train of note during November when she heaved two bogie wagons fully loaded with sleepers down the track so that sleepers could be unloaded in readiness for track relaying. 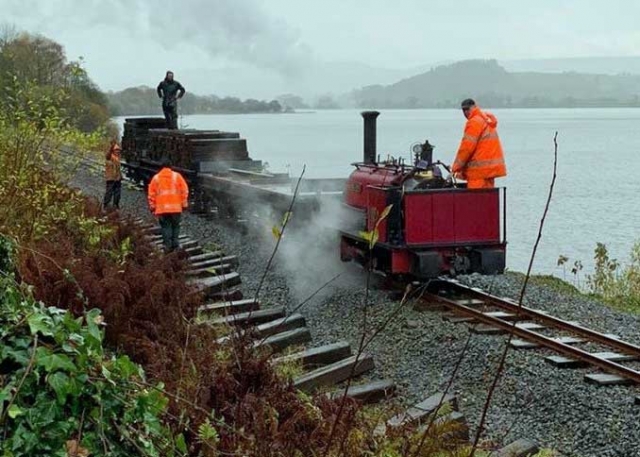 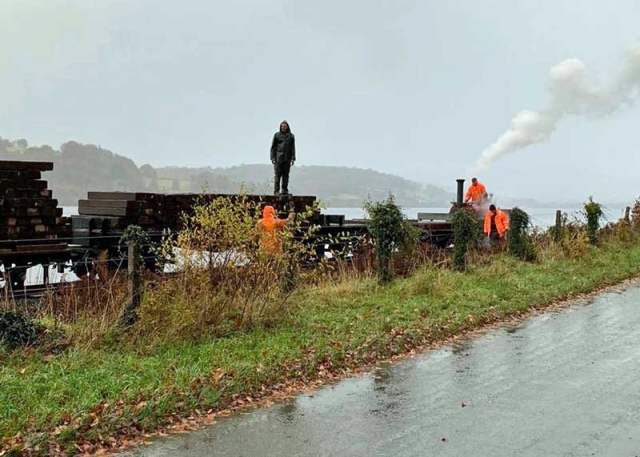 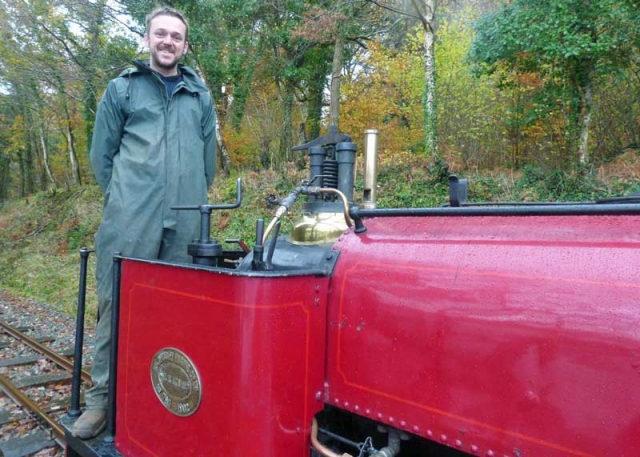 It was a decidedly damp day and she needed the assistance of our small diesel, Lady Madcap, to give her just that little bit extra traction to get the heavy wagons from their hiding place in the yard. Alice is still available for work but her strip-down will commence soon, although with a brand new boiler waiting to be fitted, the whole operation will take less time than usual.

The major topic in November was track relaying which this year involved a section along what BLR volunteers refer to as ‘the sea wall’, a beautiful open vista along the lake for passengers and photographers alike. But as the water in the lake is not saline and it is nowhere near the sea, we will explain this titular anomaly later.

This was a month of records. On the 16th, work started and 50 lengths of rail were lifted by lunchtime, 47 lengths measuring 24 feet each with the last three measuring 30 feet. With all this disassembled, the track-bed was ploughed using the Chief Engineer’s tractor and the ingenious BLR-made plough, after which the ballast was tamped with two small machines. On the 17th, 16 lengths were laid with great care being taken with sleeper spacing, using the tried-and-tested measurement called ‘two manager’s feet’ (the standard spacing just happens to be the same as two of the manager’s size 8 boots!), although for this year, a purpose-built measuring instrument had been specially made! At this point, great care was taken with rail alignment, using the age-old expedient of the human eye. There is nothing better. The 18th saw 29 lengths laid in one day, a new record. There were only five more lengths to lay on the 19th, after which the gaps at the ends were adjusted using a grinder and the locating holes for the fishplate bolts were re-drilled. All the fishplates were carefully greased as the tracklaying progressed, the 10 mm expansion gaps checked and the rails spiked down to the correct gauge . 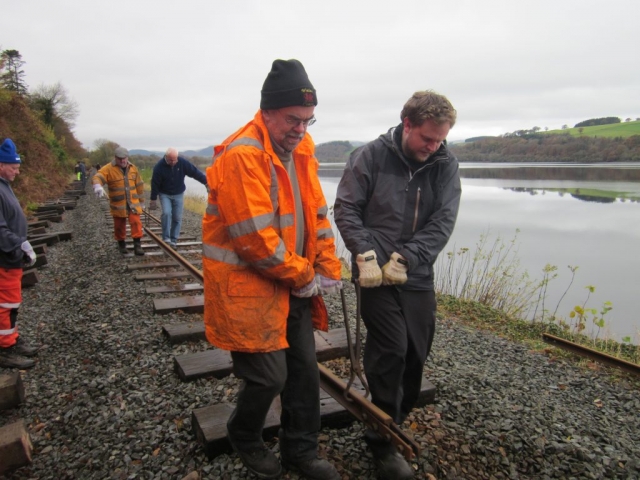 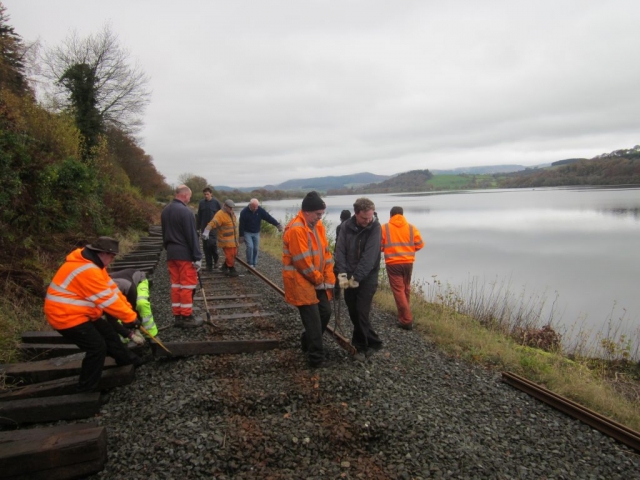 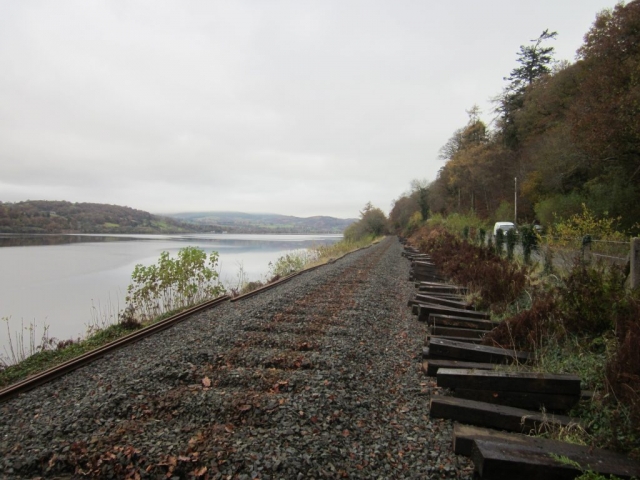 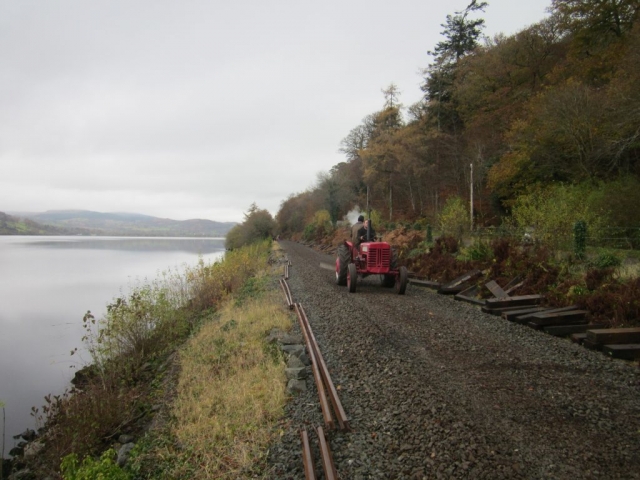 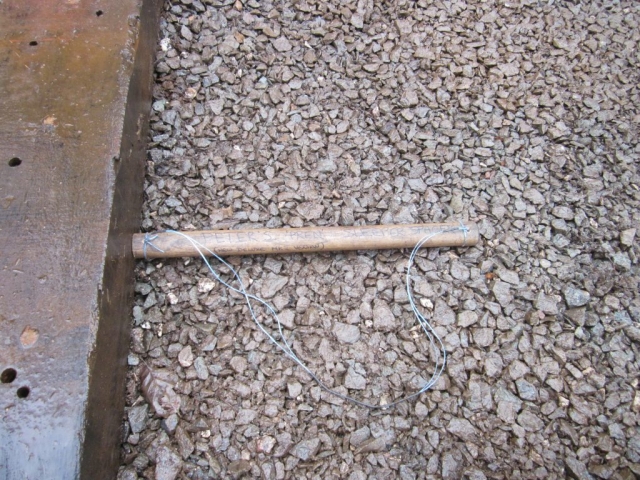 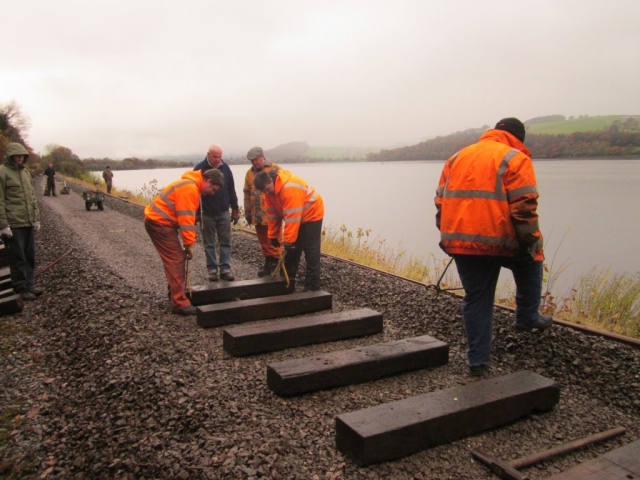 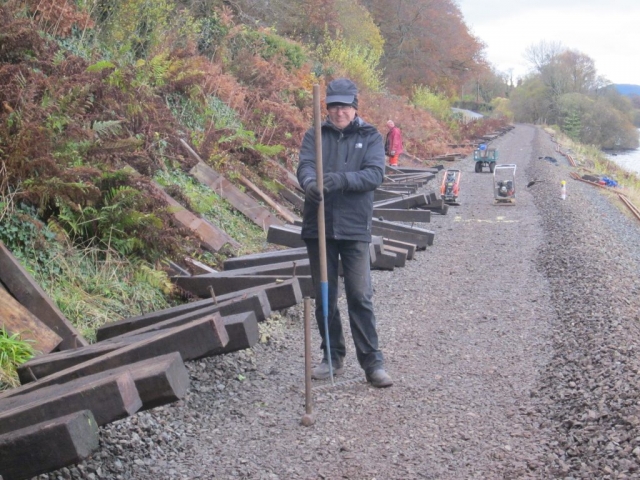 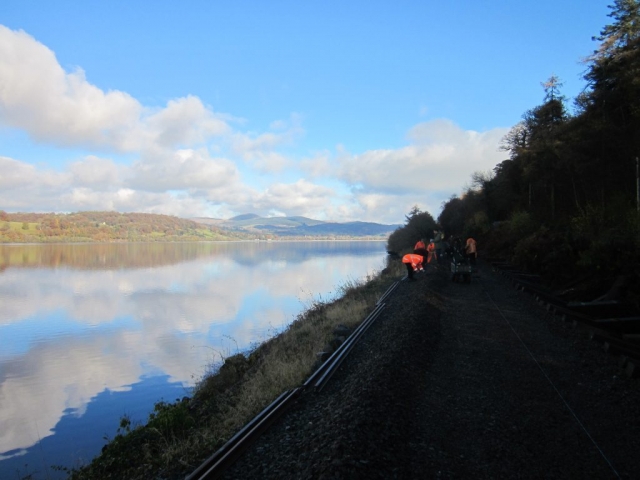 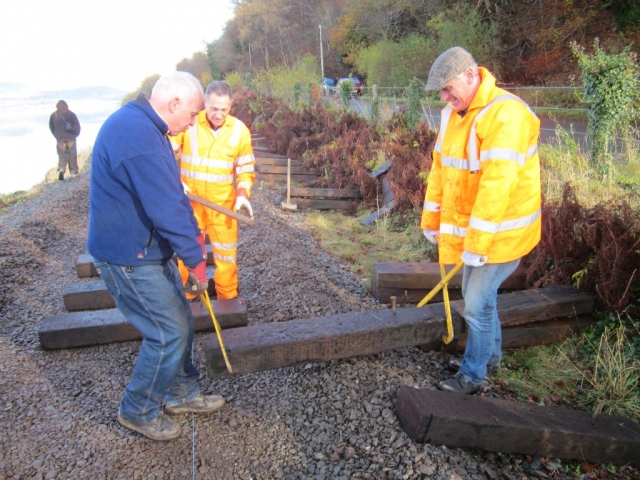 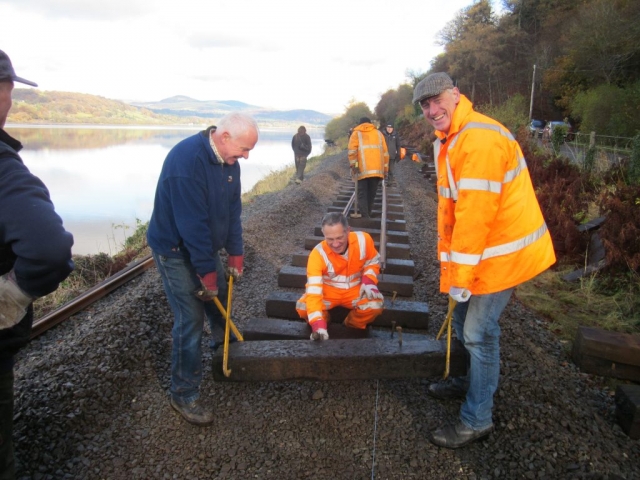 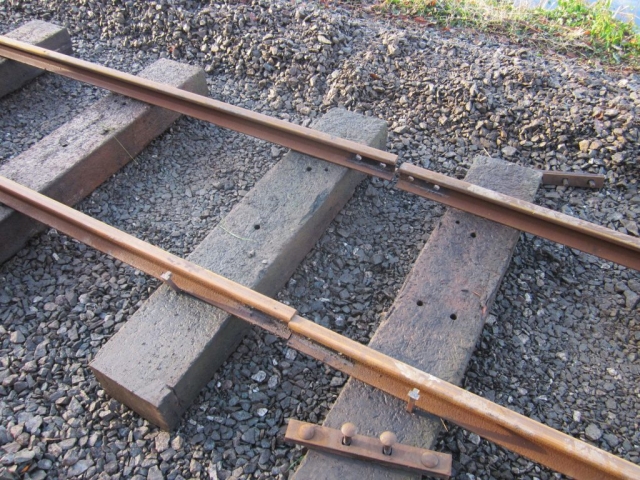 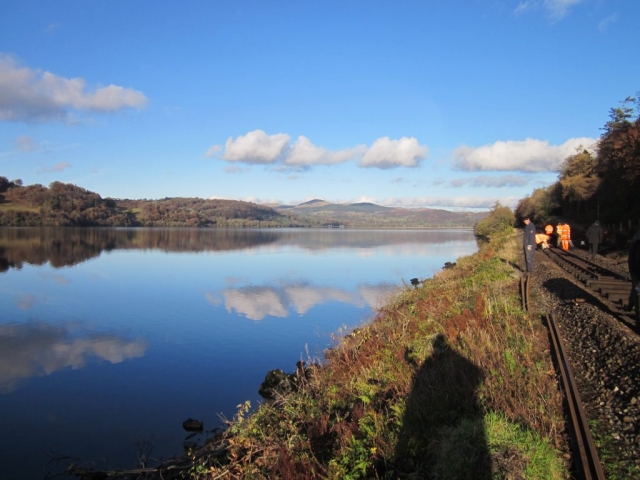 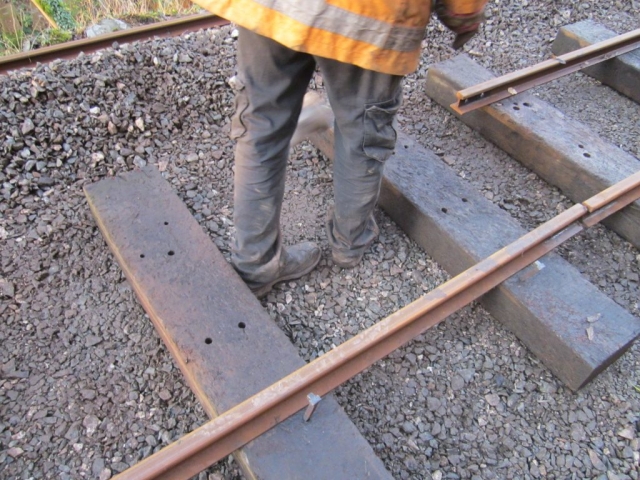 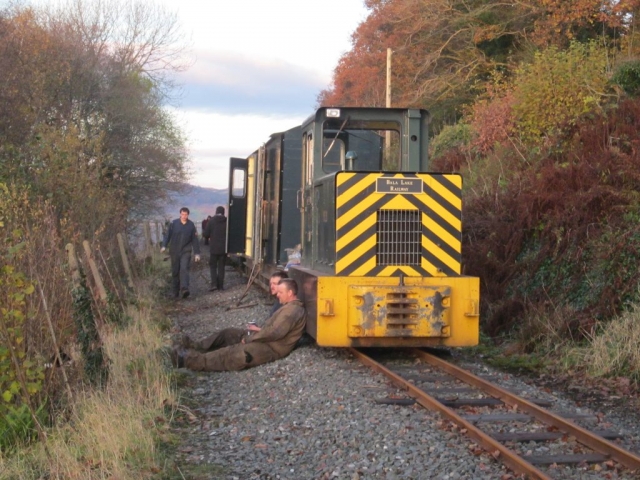 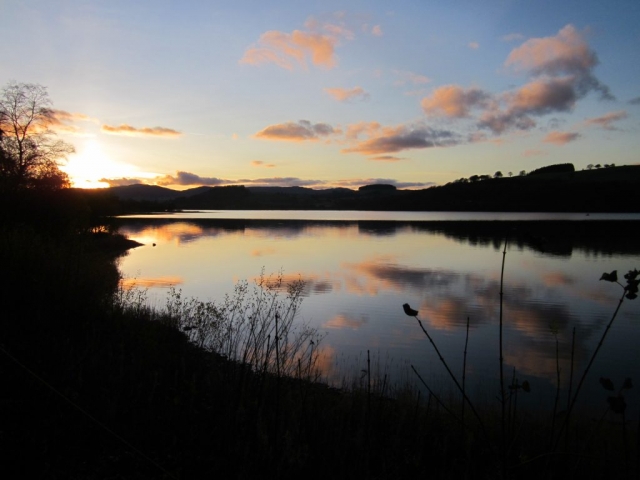 At this point, the rails were still a little flexible so Rob Houghton and Dan Laidlaw tidied up and did the fine adjustment, again using visual instructions from 50 yards apart, and any major dips in the ballast were corrected as well. It was at this point that the other ingenious BLR instrument was towed behind ‘Trigger’, the railway’s trusty main diesel, this being another plough which scoops the ballast from the sides and back up on to the rails/sleepers. As the track condition stands at the moment, it is fine for a works train until our newly ordered tamping machine arrives in the new year, and our Santa Specials only run from Llanuwchllyn as far as Flag Halt. By the time the 2020 season starts in earnest, the re-laid track will have been tamped and checked thoroughly again.

All in all, it was a very successful body of work, completed in record time and achieved with a lot of hard work and fun, as our video, shot by Tim Williams, perfectly illustrates. The impression of the late lamented Fred Dibnah by volunteer Steve Jones (definitely a hidden talent) is something to be savoured.

‘The Sea Wall’, as mentioned earlier, is a nickname coined years ago and which stuck, however erroneous. But the location actually has the name Pant-yr-hen-felin, which translates as the Hollow of the old mill. Careful scrutiny of halfway along the ‘sea-wall’ stretch will show a stream running down from the hillside next to which the old mill once stood. There is history everywhere.

Winifred will run at Bala Town Station in 2020. While this is in no way an over-optimistic proclamation for the extension project, it is planned to lay a short section of track at the Town Station site in mid- summer which will give everyone in Bala and the surroundings a real idea of what steam/passenger services will be like, plus a further affirmation that the BLR Trust really means business. Follow the link below to find out more about this exciting venture which will feature other attractions as well.

The BLR Santa Specials are scheduled for the 7th and 8th of December and a few last minute tickets can be obtained by accessing the link below. Do not delay book today.

And finally….., BLR Director Julian Birley invited one of his oldest friends, former airline pilot Patrick Caruth, to overfly the BLR area. Having boarded the single-engined plane at Welshpool, the nearest airfield, the far from smooth flight did at least facilitate some interesting photos of the extension route, our Llanuwchllyn HQ and the lovely scenery in the area, as well as Rob Houghton at the controls. Is there nothing he cannot master? 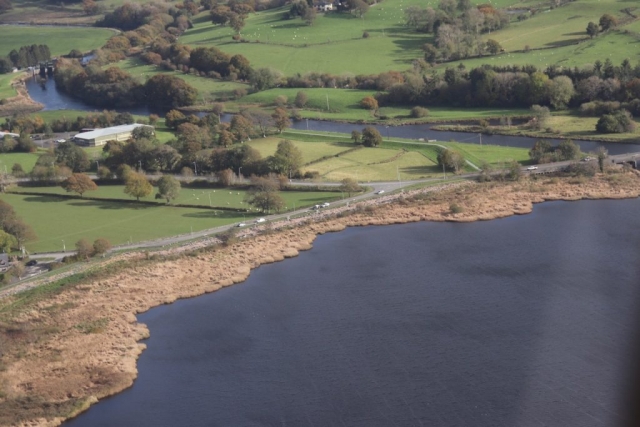 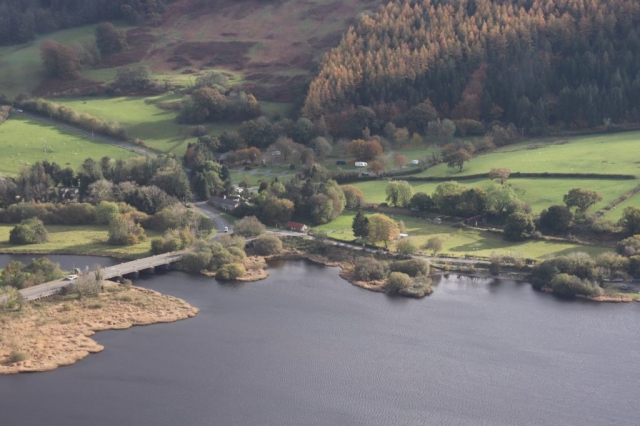 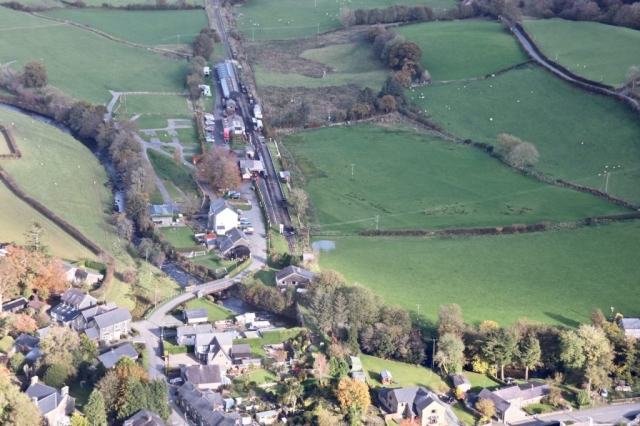 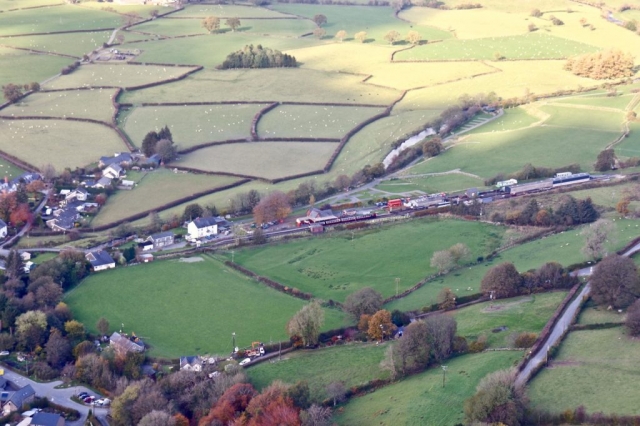 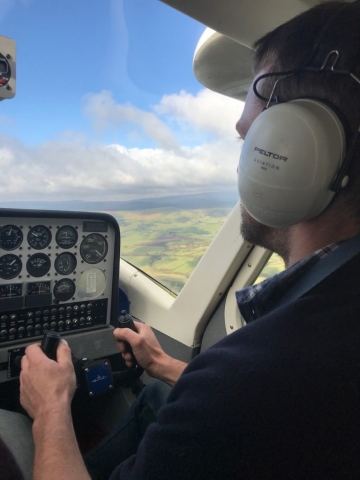