The first working weekend of the year took place over the weekend of the 18th/19th and was well attended. Perennial BLR stalwart, Bob Greenhalgh, takes up the story.

The first working weekend of the year was a bit chilly, so the first job of the day was to defrost and start Trigger, our trusty diesel. Then the works wagon was loaded with equipment plus the necessary essentials for a trip down the line, namely tea, coffee, water, milk and, of course, the famous BLR flapjacks. Before setting off, we split into a Llanuwchllyn team and a down-the-line team.

The D-T-L team set off, our work site being Pentre Piod Halt to ‘Culvert Quits’. The hot breath of the work party inside the cold ‘catoflat’ works wagon created a cabin-full of mist, obviously caused by animated conversation! The jobs were to change 40 sleepers, work on the culvert, ditch clearing and bushwhacking. The day was chilly but bright and we soon warmed as we worked. Bob Newton kept us watered – huge thanks to you, Bob.

The photos show better the culvert work and the 40 sleepers were changed, resulting in an excellent day’s work. The last photo shows Dan Laidlaw enjoying a well-deserved brew with the lake very still in the background. 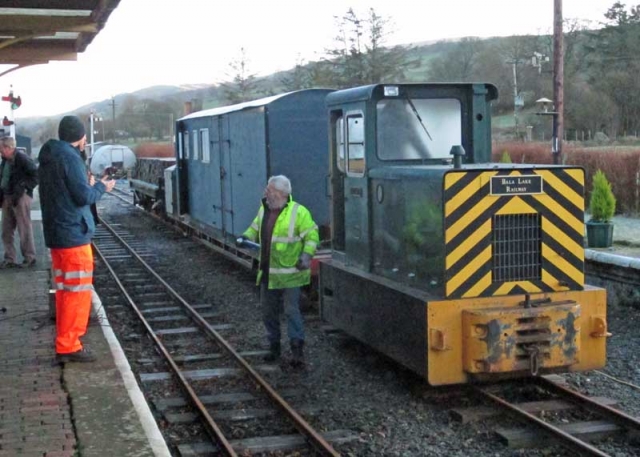 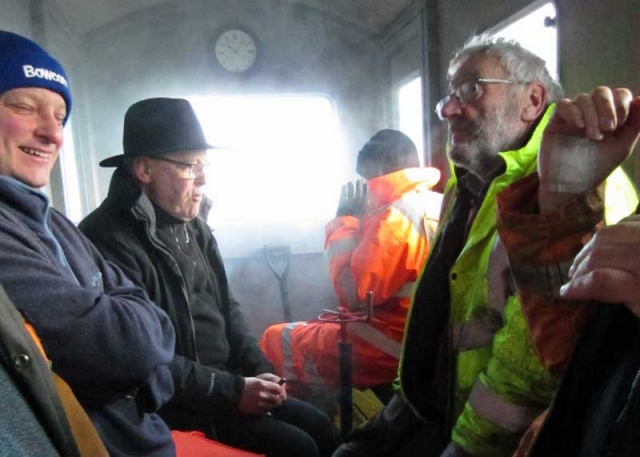 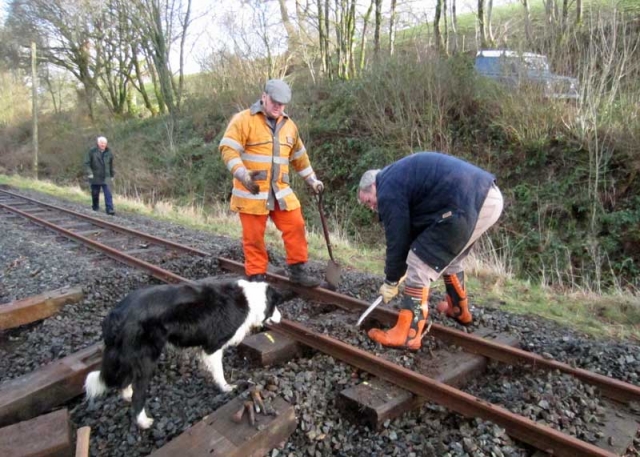 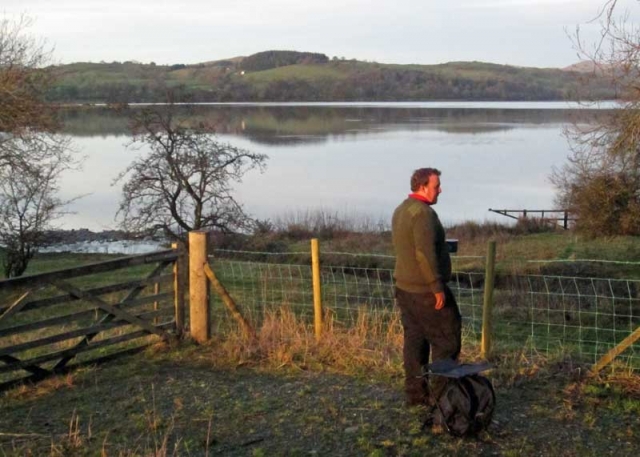 Bob Greenhalgh’s photos capture the atmosphere to perfection, including BLR Director, Martin Levy’s dog, Misty, getting in on the act. Rather like that moment in Jerome K. Jerome’s book, Three Men in a Boat, whenever someone bent down to adjust a fishplate, Misty immediately thought her cold wet nose was required!

The Sunday was spent cutting back foliage from BLR land and disentangling it from fences, a job which had been started before Christmas but was now completed, thus seriously opening up the views of the verdant countryside, not just the lake.

Coach rebuilding has been on-going for weeks and the working weekend saw continued activity on the two coaches which have been occupying the loco shed. After the first coach to feature doors on both sides was completed last year, (a modification needed for Bala Station when the extension is complete), the two being refurbished at the moment will also benefit from this modification, one closed coach and the other open. The open coach had been stripped right down to a bare frame, just retaining its roof for modesty, and previously had its wooden seats removed. Volunteer Roger Kent took them back home to the Lake District where he has stripped them and applied three coats of luxuriant varnish. He brought them back in superb condition ready to be refitted in March, after which the open coach will be fettled further and completed for the Easter services. At the working weekend, both coaches had their underframes de-rusted and wire brushed, and the frames and new floor boards painted. The closed coach, completely stripped to bare frames, will be fully rebuilt and painted ready for the start of the operational season over half-term in February, starting on the 16th. 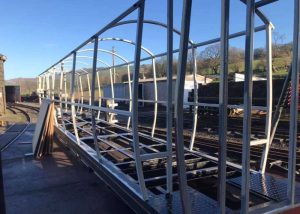 The big news this month has been the long-awaited arrival from China on the 22nd of our new tamping machine which will greatly speed up track relaying and levelling. Once the machine had been dispatched from China, Rob Houghton and Dan Laidlaw had been tracking the ship’s progress and noting with frustration each of the ports of call throughout the journey, but having waited impatiently for quite a while, there was, ironically and in the same manner as the return of Winifred, a delay at Southampton docks.

Needless to say, Southampton managed to sit on it for a while but the day eventually dawned when the tamper would arrive – but on a truck without a crane! Also needless to say, the BLR team leapt into action with an ingenious solution. The truck was sent down to the farm shop at the other end of the village, with whom the railway has an excellent relationship, and the tamper was lifted off with their fork-lift. BLR Director Julian Birley promptly arrived with his Land Rover and trailer, the machine was carefully transferred and then brought up to the station where it was unloaded by tractor and fore-end loader, whereupon Rob and Dan eagerly unpacked the new machine.

It was Christmas all over again! 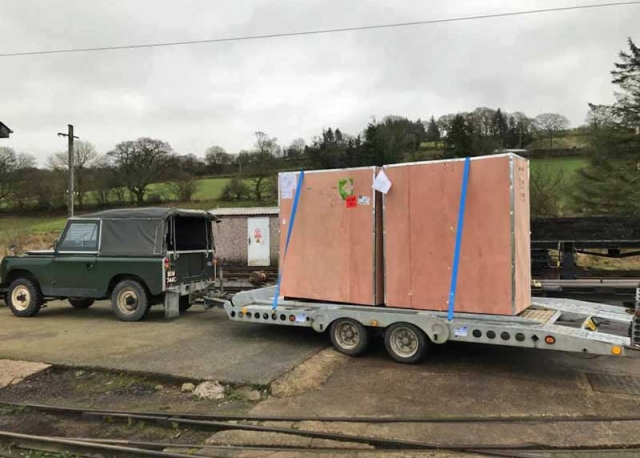 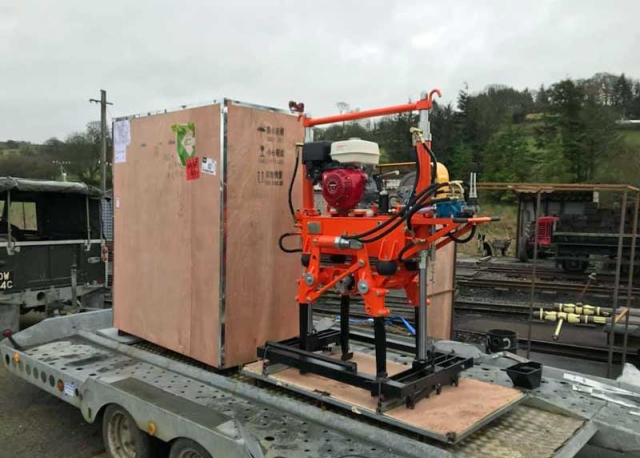 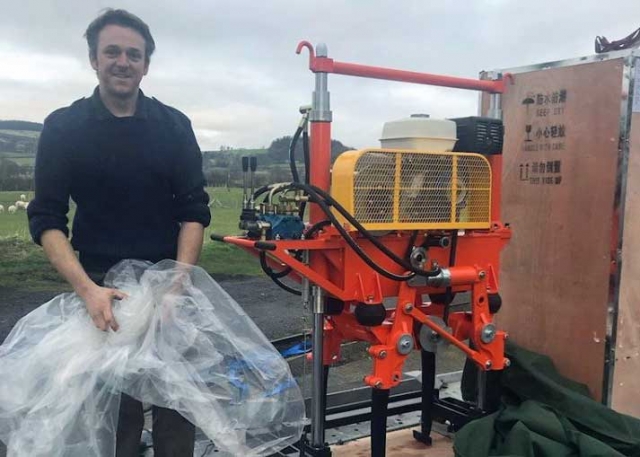 No sooner had they unpacked it than it was tested on a slight undulation along the station tracks, but not before the first modification was carried out as the extremities of the machine just fouled the platform. That was quickly sorted out and the machine proved its worth straight away. Normally, two lengths of 10 sleeper track, each approximately 24 feet long, can require over an hour to tamp and level by hand, but with the machine, it now takes 10 or so minutes!

The railway’s ramp wagon has been adapted with the fitment of rail so that the tamper can be easily moved to where it is required and the first area of track to receive attention will be the ‘sea-wall’ section which last month was re-laid but not adjusted and levelled finally, in anticipation of the machine’s arrival.

There has been more progress with Mat P’s skip wagon and we include his latest report and photos. Nothing is ever easy!

After the Working Weekend, Mat stayed on for the week to restore his LKM tipper wagon. One major hurdle was a coating of ancient bituminous paint, up to 5mm thick, all over the chassis. It was cracked and blistered but still clinging defiantly on – it had to be removed with a mixture of hand-scraping and needle-gunning, as a rotary wire brush in a drill just melted it more firmly into place.  Some fine-tuning with an angle grinder ensured that the non-original tipping body no longer scraped on the vertical ends of the chassis. The restoration took 43 Mat-hours, though three of those could have been avoided: the blue topcoat initially chosen for the body looked hideous and had to be repainted with grey. The scarred reinforcing beam on one side, made out of a piece of old steel sleeper, will be tidied up at a future date. 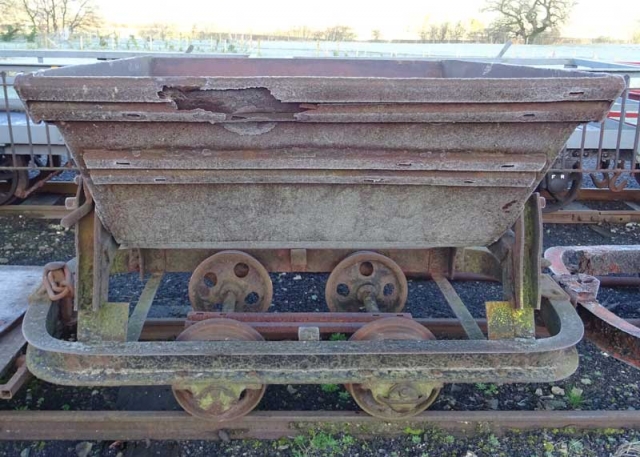 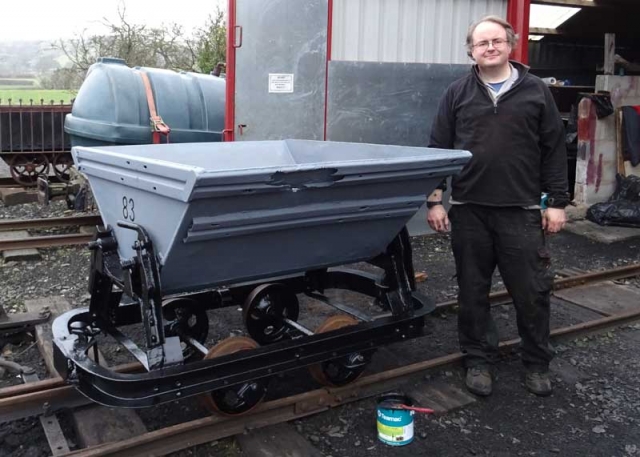 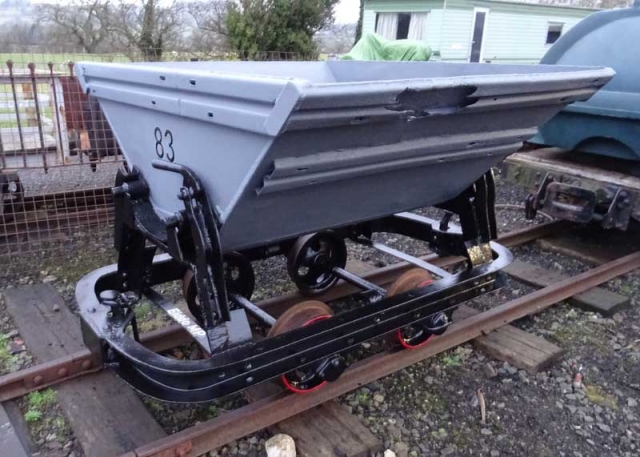 The Model of the future Bala Station has been very well received by all (we included photos last month) and it is now in the hands of Tim Williams who is adding features so that it can be exhibited as a working diorama. The model was already equipped with track wiring but Tim is now fitting it with suitable power attachments as well as a ‘fiddle-yard’ and if not before, this beautiful and relevant model will be on display at the Bala Model Railway Show in May. More news will follow in due course.

Our locomotives have not featured in these lines recently but work continues behind the scenes. George B, Winifred and Maid Marian all passed their boiler inspections with flying colours and are being reassembled for the start of the running season.

Alice, as we have already mentioned, is to have her 10 year strip-down and the fitment of her new boiler, so she will be out of sight for quite a while. In the meantime, work on Holy War is progressing with her axle boxes currently receiving attention and while there is nothing wrong with them, it shows that nothing is being left to chance. Her boiler is to be refurbished by the Severn Valley Railway which did such an excellent job in creating a brand new one for Alice.

And finally……. we include an atmospheric photo to highlight a bonus of what volunteering on the BLR can be like. You can join our volunteering team at any time by calling the railway on 01678-540666 or, even better, email us on enquiries@bala-lake-railway.co.uk. 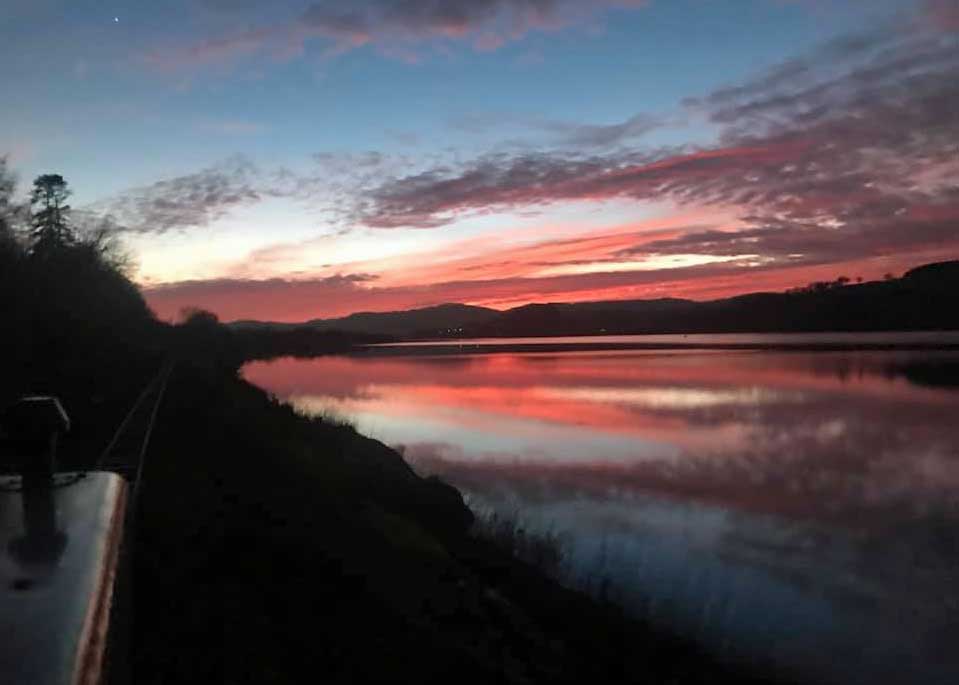 On top of this, the annual Volunteer Day is scheduled for Sunday, 26th April and, as usual, is being co-ordinated by Russell Prince. It is a perfect opportunity to have a good look at what happens on the railway and the many different aspects of volunteering, whether down the line on track work, helping at the several Gala events that take place during the year (and 2020 is going to be busy) or just getting a much better idea of what aspect most appeals. If nothing else, it certainly will be an enjoyable and memorable day.

Do please get in touch soon. In the meantime, savour this sunset photo taken at the end of a recent working day and ask yourself the question; is there another railway environment in which it is so beautiful to volunteer?