Some might expect a blank page after the heading this month but since the beginning of the nationwide Coronavirus lockdown, BLR volunteers and members have become remarkably active. The first inkling of this was the plethora of photos appearing on the BLR Volunteers Facebook page which reminisced about wonderful times recently passed and then took on a different slant with historic shots dating back to the 1970s, soon after the formation of the line, which featured youthful images of people who still volunteer, drive, signal and work on the line today. They seem to have hardly aged at all! One interesting photo was of our trusty diesel Bob Davies, perennially known as Trigger, arriving in primer on the back of a low-loader many years ago. Others have shown our BLR locos in action up and down the line and doing sterling work on their visits to other railways.

Added to these enchanting memories have been quite a number of short films of garden railways which our volunteers have constructed over the years. Such is the quality of the films and, as a consequence, the firing of the imagination that there has been a spike of enthusiasm for tentative garden alterations to accommodate a layout, in the most part hopefully with enthusiastic consideration (allegedly and conditionally) from partners. One delightful film showed a short freight that had to be ‘top ‘n tailed’ to provide sufficient tractive effort so that the cargo of beer was delivered satisfactorily during that wonderfully sunny April.

On a more serious note, and while the railway staff have had to be furloughed, bills are still coming in and the weeds along the track are still growing, thus appeals are being planned and to this end, we are very lucky to have some real talent in our midst. Following an idea from the Bala Lake Railway Society Vice-Chairman Tim Williams, volunteers have submitted short video clips which have been then blended harmoniously edited together and the finished article was produced in 24 hours, thanks in the main to volunteer Ben Nelson who, apart from being a very regular driver on the railway, is not only a superb photographer but also a professional film cameraman for sporting events. On top of this, he also produced the original BLR appeal video and subsequently revised it with a more up to date commentary, again in double quick time. This film was made initially by splicing film clips of the railway which Ben integrated perfectly to give a lovely overall view of our line, all the while ensuring that Julian Birley’s voiceover matched the visual side. Please check the BLR website for the latest productions and this link for making a donation which will be greatly appreciated. https://bala-lake-railway.co.uk/covid-19-donations/

By way of reassurance, the Directors of the BLR stated that they were carefully monitoring the situation and fully approved of the measures taken by our General Manager David Jones in his efforts to keep funds coming in and planning for the future after we eventually get the ‘all clear’.

Volunteers are an inspiring group and very soon after lockdown, various competitions appeared, first of all a caption competition for a suitable photo which produced some deliciously ribald entries. Next, we saw a colouring competition where a line drawing of a Hunslet could be coloured, producing some decidedly original colour schemes, including rainbow colours. A real brain teaser was the word competition where 10 relevant words/names from the railway were hidden in a grid format, not as easy as one might think. As a diversion from endlessly going through old railway films, these tests proved beneficial for the brain cells and definitely raised everyone’s spirits. 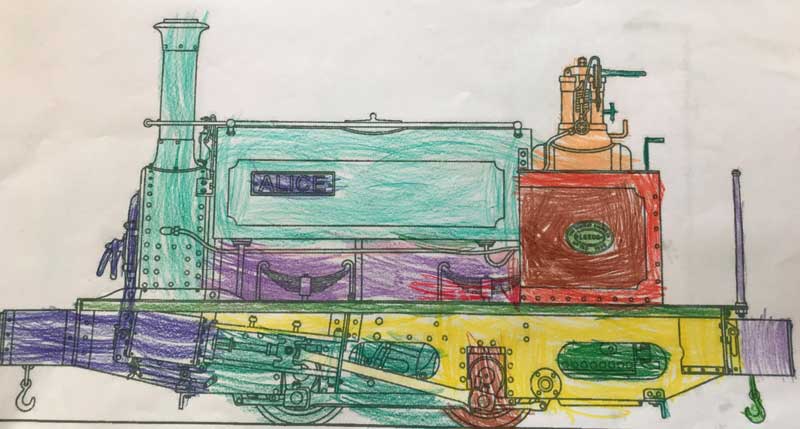 Looking forward, the planning application for the Red Dragon Project, our aim to get the track back into Bala Town, is progressing but as we have stated before, this is a real magnum opus and has to be right first time thus steady progress is the order.

Also in the works is a new layout being built over a period by Tim Williams for eventual display in the now award-winning Heritage Centre at Llanuwchllyn. Construction is continuing very slowly and the quarry pit area is now complete. Knowing his attention to detail, it will be a big draw and add considerably to the appeal of the whole exhibition. 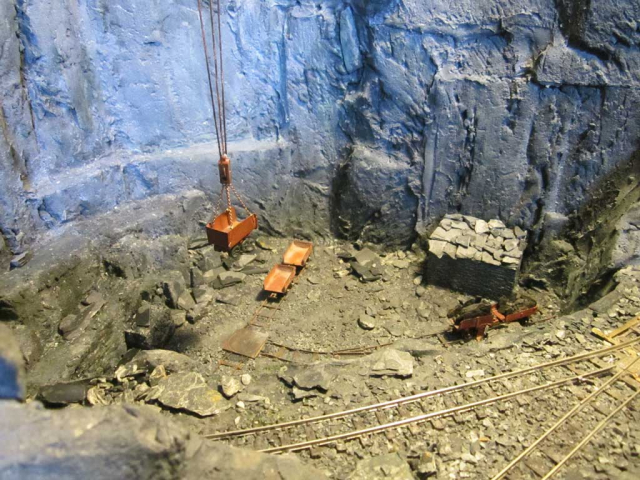 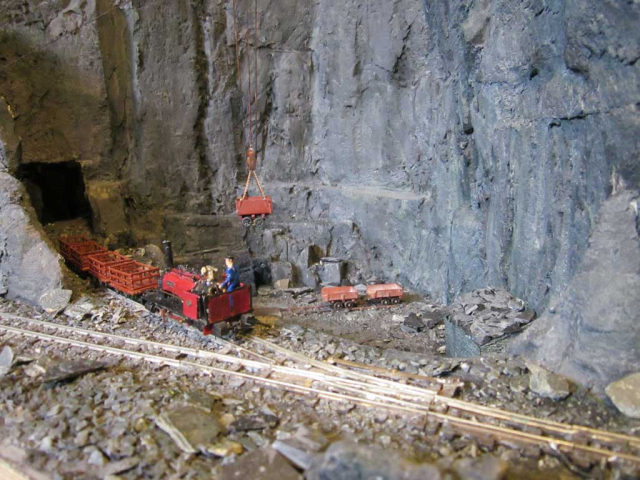 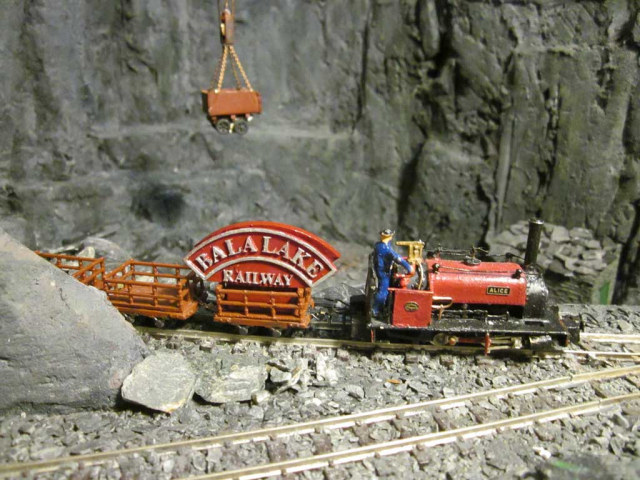 Looking back, it was five years ago this month that the BLR held a wonderful party to celebrate the return to steam of Winifred after her three year restoration. The guest of honour on that memorable day was Pete Waterman, the famous record producer and noted railway enthusiast, and the packed VIP train for Winifred’s first trip along the lake was inadvertently ‘escorted’ by an RAF Hercules which was seen to waggle gently, almost imperceptibly, her wings in salute. Maybe coincidental but it was excellent timing on the part of the RAF. The second service that day coincided with a Chinook flapping past along the lake and some of its crew were waving from the back of the chopper, the tail-ramp of which was partially lowered. The word about Winifred had perhaps spread further than expected. 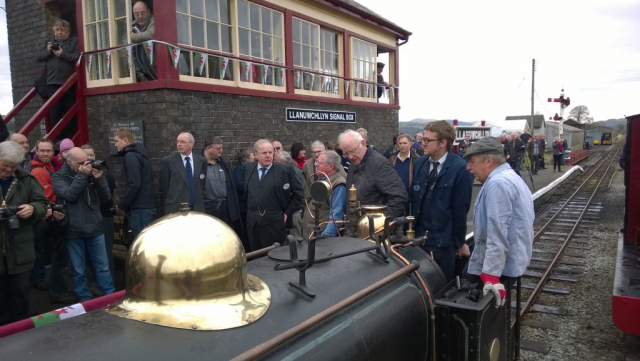 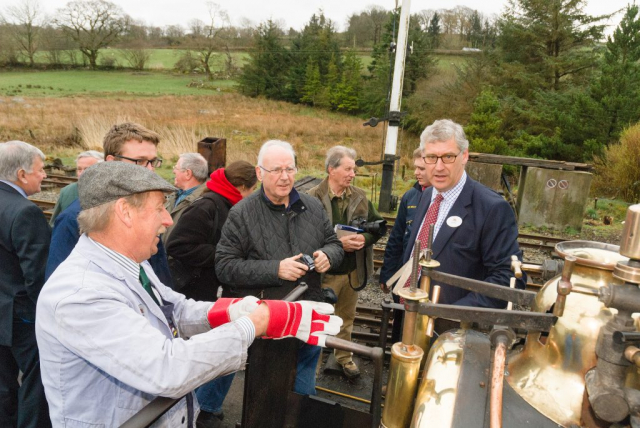 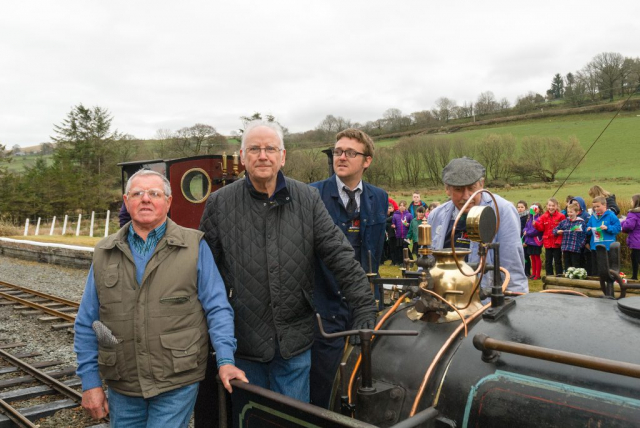 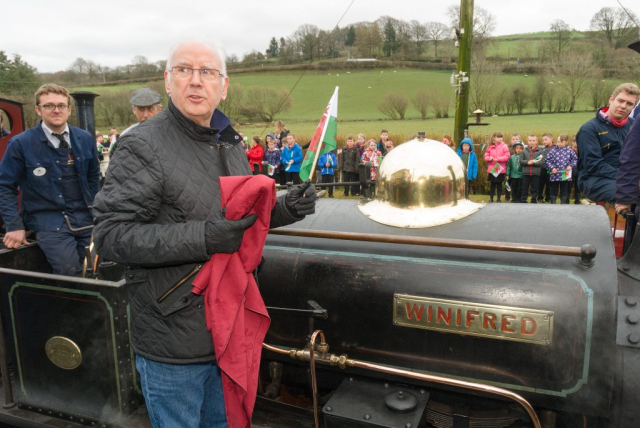 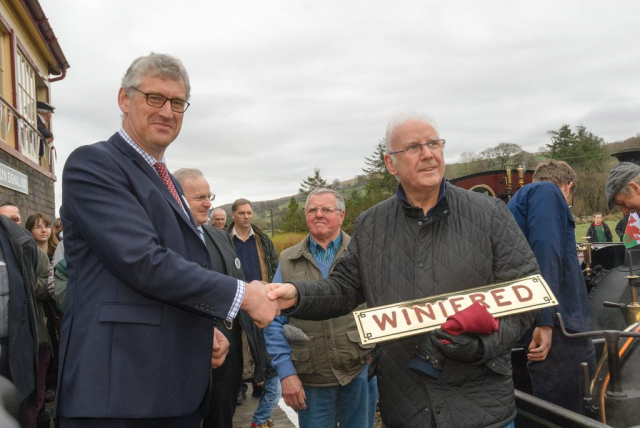 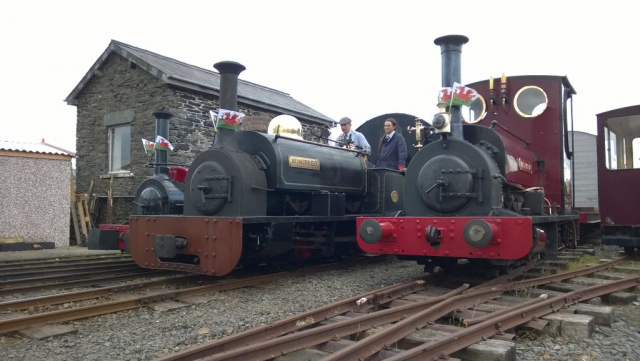 Obviously, in this current climate, security is a worry and news of a break-in at the East Lancs. Railway soon after lockdown was disturbing to the entire heritage railway community. It is therefore gratifying that we have in Llanuwchllyn a director, a member of staff and a number of volunteers, all of whom can take their daily but lonely exercise around the station area. The railway has already installed extra security cameras which can double for website viewing on running days, and these are monitored on a very regular basis. The BLR also owes a particular debt of gratitude to the North Wales Police who are not only prowling around the area looking for dodgy behaviour but who are also keeping a close watch on our station and railway buildings.

Further to our previous mention on photos, volunteers Russell Prince (he who coordinates the Volunteers Recruitment Day) and Tim Gregson (of noted computer expertise) are beginning to assemble carefully an archive/library of photos relevant to the BLR, not only from day one on the BLR but also when it was part of the Barmouth to Ruabon standard gauge line. Such has been the response that we are deliberately withholding the email address so that they can get up to date, a not inconsiderable task, judging by the deluge. In the meantime, if you have some relevant photos, please scan them or gather them together electronically. We will publish the address when they come up for air soon.

There are two sides to the Bala Lake Railway as far as news coverage is concerned. This section is designed to cover events on a monthly basis, but the quarterly journal of the Bala Lake Railway Society, the Llanuwchllyn Express, covers other aspects of life on the railway, with different features and photographs.

LE, as it is affectionately known, is sent free of charge to all members of the Society and is skilfully compiled and edited by volunteer Nick Talbot. Being a member of the Society brings numerous bonuses, notably conditional travel benefits on both the BLR and the Talyllyn Railway, plus other really useful discounts. Please have a look at the BLR website and go to the Society contact page. By joining, you will be providing valuable support for the railway, particularly at this tricky time and, of course, you will also get an excellent read about other facets of the railway, particularly the human aspect, including the Chief Engineer’s dog, Max, which seems to get everywhere. Please have a look. You will not regret it.

As an addendum, a Society Members Only area on the website has just been launched which will contain an ever-growing collection of back-issues of Llanuwchllyn Express. (https://society.bala-lake-railway.co.uk/)

And finally….., not content with posting individual photos and videos to keep everyone amused, Ben Nelson and Tim Gregson have hatched an inspired idea to host a BLR ‘Virtual’ Gala. Watch the website and the BLR Social Media channels. It will happen soon.

In the meantime, please keep safe and well. This pestilence will not last forever, but it will last longer if the lockdown is lifted prematurely, thus putting more strain of our wonderful carers and NHS. All we can do is be patient, employ a bit of the Captain Tom spirit, think of the Bala Lake Railway – and smile. We will be back. 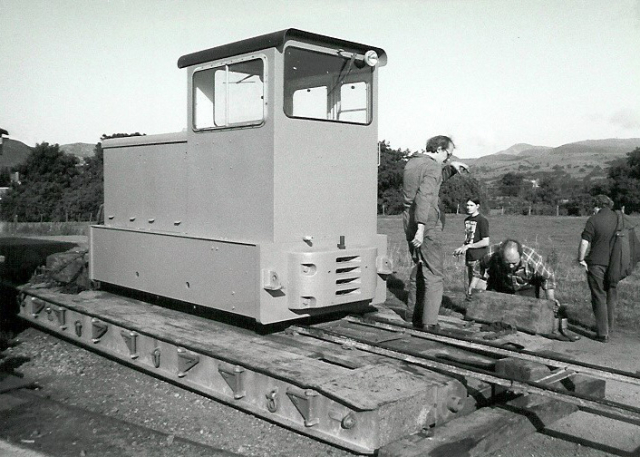 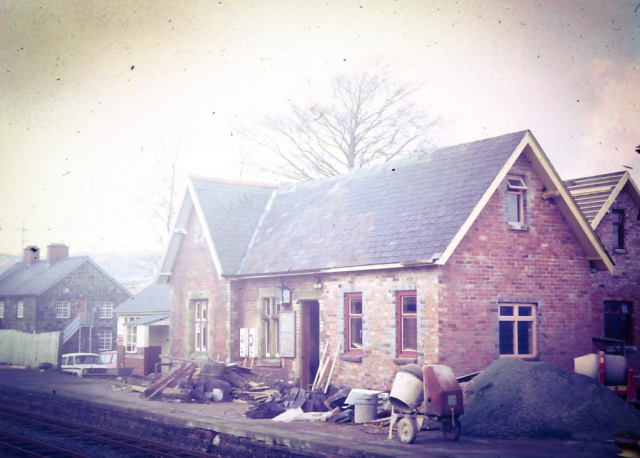 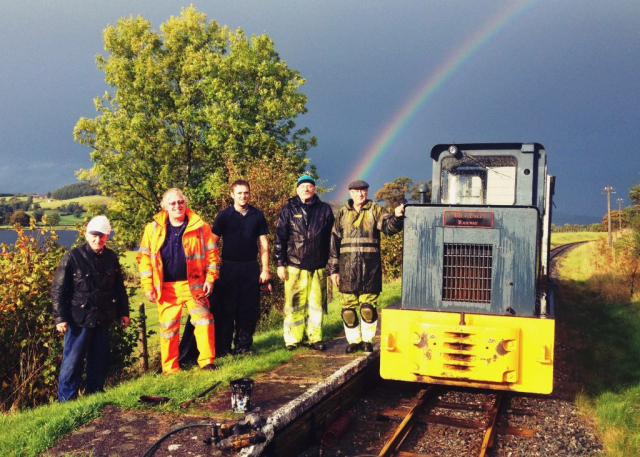 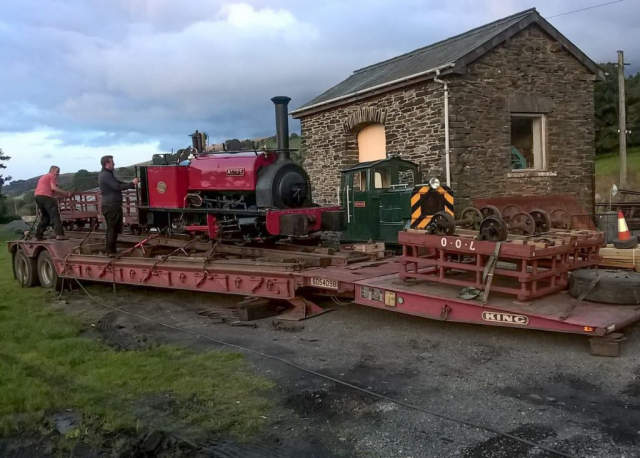 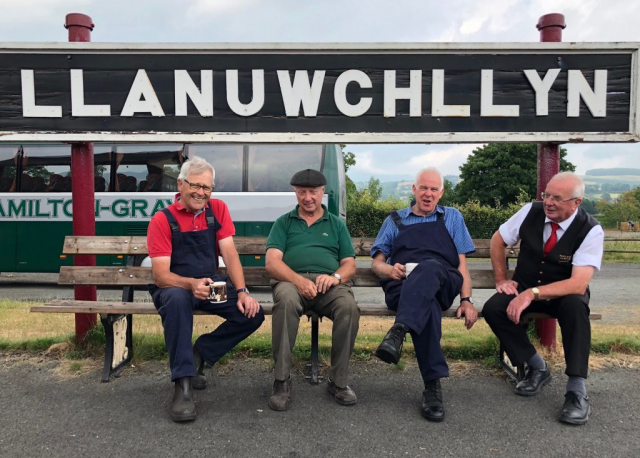 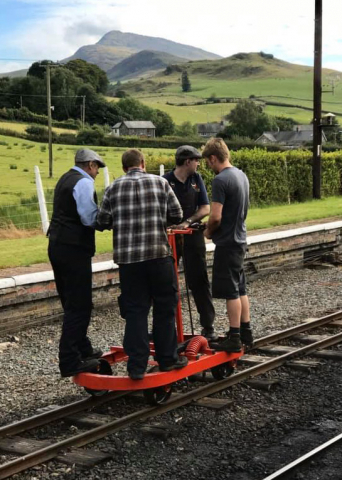 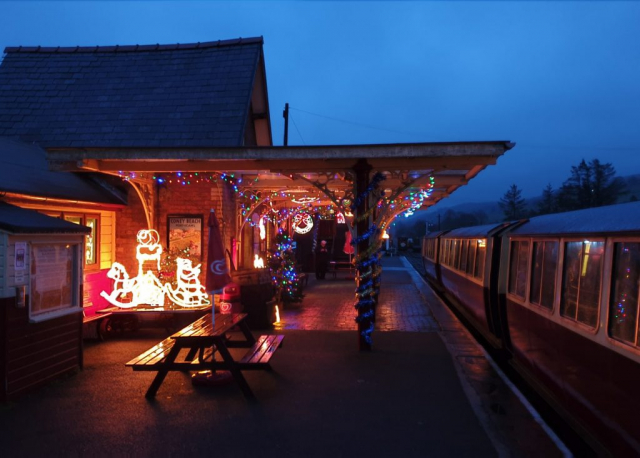 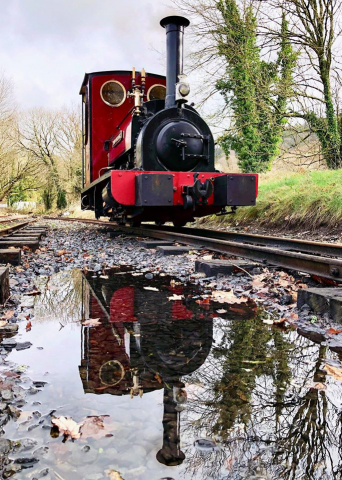 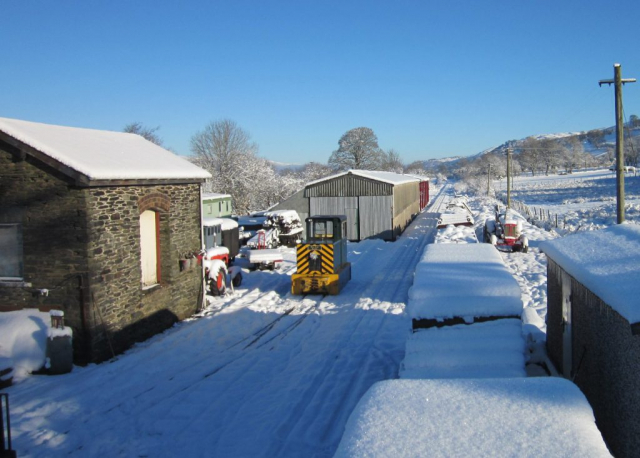 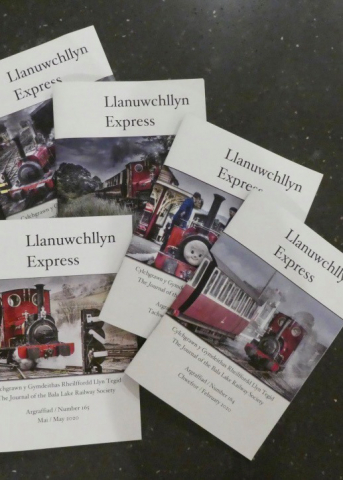