The news for June falls neatly into two categories, namely The BLR Virtual Gala and the imminence of services restarting after our enforced pandemic break.

The Virtual Gala was an unequivocal success and huge thanks should go to all who submitted film clips and information plus the Demon Trio of Tim Gregson, Tim Williams and Ben Nelson who put together such an enjoyable feast of footage. There was something to delight everybody and some pieces really brought a warm smile to the face, notably the Cavalcade where seven little locos puffed happily up Dolfawr Bank in line astern, in one instance with non-running Triassic in tow. Sadly she has not steamed for years but she was not to be left out of the fun. It reminded several of the May Day parade in Wolsztyn, Poland, only with more subtlety and a great deal more charm. All the film collation was a masterpiece of co-operation and technical ability.

Likewise, the Virtual Shop proved totally inviting to great numbers of our supporters and friends with the Official Guide being, predictably, the most popular purchase with 149 sold. The virtual bacon butty was the most popular edible item, with the virtual bucket of coal coming second in the purchase stakes, followed by the virtual footplate ride. This writer’s virtual lunch left his virtual waistline virtually unaltered, thus promoting virtuous contentment. This will not necessarily be the case on the next visit to the station café which, of course, is dependent on Welsh Government guidelines, of which more later.

Statistically, the Gala raised awareness of the railway to unprecedented levels with Facebook Page reach and other activities up by huge margins but among the most notable figures was a rise of ‘likes’ by the staggering amount of 583 which represents an increase in likes of  594% over the previous month. It is heart-warming to know that the BLR is watched by so many friends, followers and well-wishers.

The total amount raised for the BLR Covid-19 Appeal so far is just over £13,500 of which £2,500 came from the Gala alone, a really impressive and generous amount, for which the railway is extremely grateful.

Other incidentals regarding the Gala included the occasional ribald comment about one of the footplate crew which merited the comment; “Who let him drive?” Those who bought the BLR 2017 ‘Reliving Preservation’ 2-disc DVD were treated to not only some wonderful footage from 2017 but the box came with two A4 laminated photos of our Hunslets, featuring Russell Prince, perennial driver and organiser of the Volunteers’ Day sporting an even more florid waistcoat than normal, plus on the other, our very own Liz Partridge manifesting her own inimitable appeal combined with the alluring combination of steam and soot. No one does it better.

Incidentally, the Virtual Shop is still open for those who need a second stab at the goodies on offer or for those who might have missed an exciting opportunity. It is never too late.

Following an application, the BLR received a Grant from the National Lottery Heritage Emergency Fund for £40,000 which, together with the amount raised by our own appeal, is of enormous help to keep the wheels moving, now that all our staff members are off furlough and back at work. We publish here the official statement.

The Bala Lake Railway has received £40,000 from The National Lottery Heritage Fund to assist with essential costs during this unprecedented time.

Since the Covid-19 pandemic and lockdown began, The Bala Lake Railway, like all tourist attractions in north Wales, has been deprived of any opportunity to operate, entertain visitors and earn an income in their limited season. This put fifty years of work preserving railway heritage unique to North Wales and local jobs at risk.

Julian Birley at the Bala Lake Railway said: “Thanks to the National Lottery and its players, we can now have a much greater hope of coming through these unprecedented times better and stronger. We are grateful that The National Lottery Heritage Fund is supporting us at this crucial time – it’s a lifeline to us and others who are passionate about sustaining heritage for the benefit of all.”

The funding, made possible by National Lottery players, was awarded through The National Lottery Heritage Fund’s Heritage Emergency Fund. £50million has been made available to provide emergency funding for those most in need across the heritage sector.

The UK-wide fund was launched to address both immediate emergency actions and help organisations to start thinking about recovery.

Ros Kerslake, Chief Executive of The National Lottery Heritage Fund, said: “Heritage has an essential role to play in making communities better places to live, supporting economic regeneration and benefiting our personal well-being. All of these things are going to be even more important as we emerge from this current crisis. Thanks to money raised by National Lottery players, we are pleased to be able to lend our support to organisations such as The Bala Lake Railway during this uncertain time.”

There is now a veritable hive of activity on the line getting everything ready for re-opening. Firstly, our intrepid team of Rob Houghton and Dan Laidlaw took the works train with the new tamper (the Rob ‘n Dan machine) down the line to check that all was well and to do some extra fettling which would normally not be possible at this time of year. On top of that, the carriage inspections not carried out due to lock-down are being completed plus partitions installed, sanitation stations established and screens on the sales counters. The BLR is one of only two railways to re-open at the moment and the initial services commenced on Thursday 9th July following the latest Visit Wales announcements. As it turned out, we were the first railway in Wales to re-open after the lock-down.

General Manager David Jones has been burning the midnight oil organising how the railway will function while incorporating the numerous necessary health restrictions, and he made the following succinct comment; “Just because the infection rate has now reduced, it does not mean that Covid-19 has gone away, and it still presents a risk to health”. To those proposing to visit, be they volunteers or public, he added; “You will also find physical differences around the railway, with safe distancing markings, designated queuing areas, lots of new signage and a one-way system through the station café. We will be using the next few weeks to bed in our systems and routines, and to make changes if or as needed. We are also launching our new on-line ticketing system, and for this we owe enormous thanks to volunteer and IT maestro, Tim Williams, who has been working round the clock to get this in place in record time. If we had put this out to tender, we probably would not have received the quote yet!”

The enthusiasm among our volunteers to get busy again is rampant and BLR Society Chairman Dave Rutt and his wife Ailith have been busy organising Zoom meetings to get the volunteers’ input into our plans and likewise to brief them on the changes they can expect when they next return. Meanwhile Nick Talbot has been busy co-ordinating rosters as accurately as possible, not an easy task in the current circumstances, bearing in mind that preparing a loco with social-distancing is relatively easy but juggling the available volunteer accommodation with more limited capacity has become a real headache.

Dates for the future are still very much of the ‘pencilled-in’ variety, including the previously mentioned Volunteers’ Day which has been put back to the 13th September. We can only hope for UK-wide common sense to prevail in helping reduce the infection rate so that we will be able to hold this important day for as many as possible, distancing permitting, and the next few weeks will be critical.

However, one date that has had to be cancelled is the annual Alice Day on the 1st August. This is very sad as this event always draws crowds of people who delight in not only seeing our own Alice and others in steam but also talking to the famous author and illustrator of the ‘Alice’ series of books, Pauline Hazelwood. It is a great shame but it cannot be helped, and we look forward to happier and freedom-filled times in the future.

And finally……. we include a couple of photos taken by Rob Houghton while on the inspection trip down the line. The track looks to be in remarkably good condition, bearing in mind nothing has been near it in months, plus it shows the effectiveness of our weed-killing expedition before this pertinacious pandemic put a monumental spanner in the nation’s works. 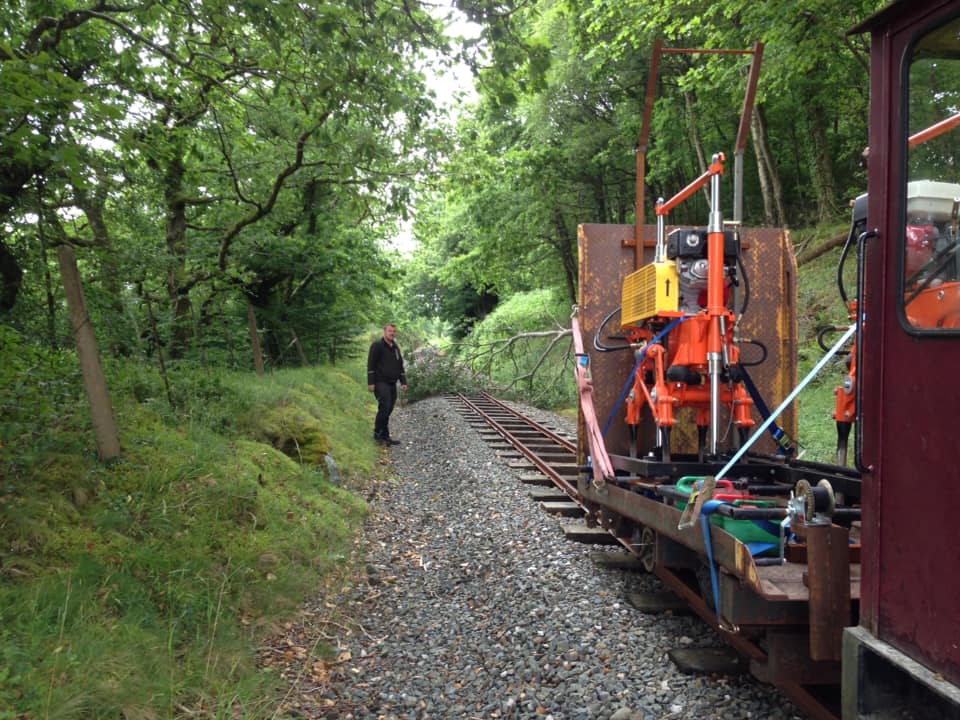 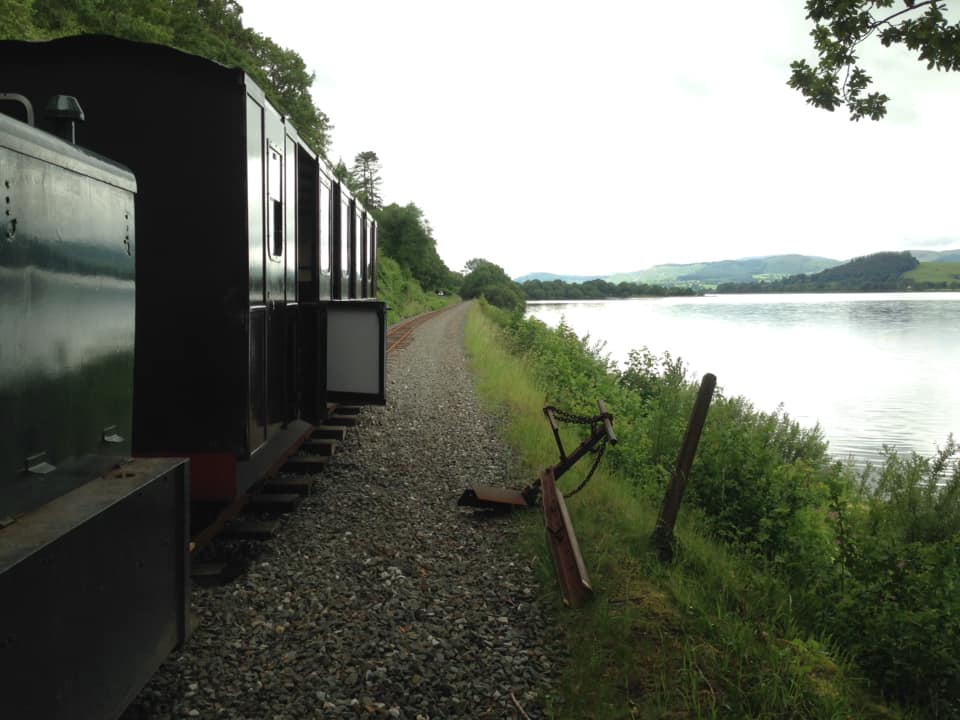 But we will be back. As David Jones put it perfectly; “We have missed running trains and have missed you all, but the wait is nearly over. Hopefully, you will be able to hear for yourself the sound of steam whistles reverberating over Llyn Tegid very soon”.