Who would have thought it? After a tentative start on the 9th July (of which more later), passenger numbers for the first operational month since the lock-down began have proved to be distinctly healthy and, in effect, by the last week not far off those of July five years ago! This is not only remarkable but also, to a degree, understandable as families have been so restricted in their movements, thus they have seized on an opportunity to have some fun and, most importantly, in a safe and carefully thought-out environment. The school holidays helped as well.

As soon as it was mooted that restrictions might be relaxed, the three members of BLR staff leapt into action with plans of how to accommodate safely as many passengers as necessary in the carriages as well as looking after them in the station café. Perspex partitions were made for the carriages with every third bay compartment blocked off while ingenious transparent panels were suspended from the ceiling in the station café, thereby keeping the shop browsers away from the line of customers for refreshments. Satisfied customers were then encouraged to exit by a side door on to the platform which is not normally in use. In compliance with Welsh regulations, all passengers have to wear face masks and the loco crews, being unable to distance themselves sufficiently on a small loco footplate which is decidedly social, have to wear masks too. The platform has reminders everywhere about keeping one’s distance and even the station loos have been fitted with a delightful system of ‘traffic lights’ outside each facility, green to enter, red to wait, and all created from the fertile brain of former BLR General Manager Roger Hine whom you may recall is something of an electrical wizard and who devised the clever voltage converter for our diesel loco, Chilmark. As our group of photos show, every facet of the customer experience has been covered and the mood of visitors was as happy as usual and it helped that everyone is getting used to these sorts of precautions which will be with us all for quite a while yet. 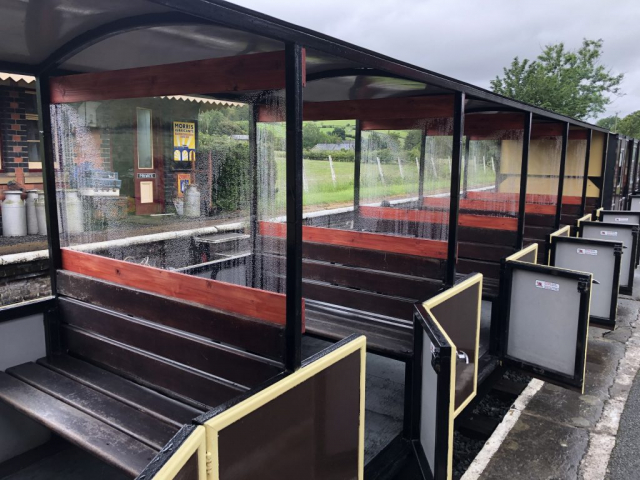 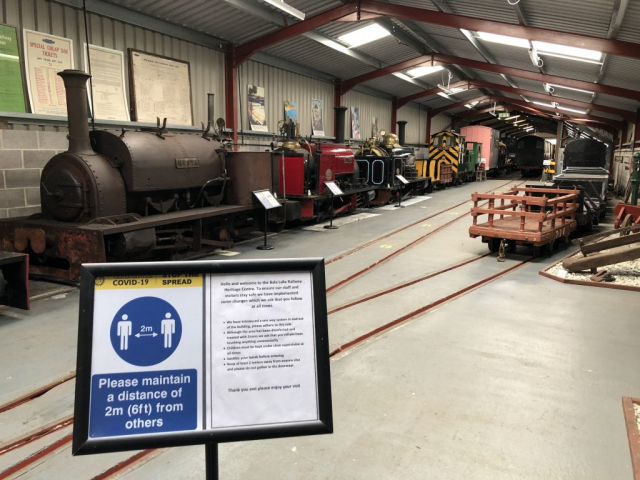 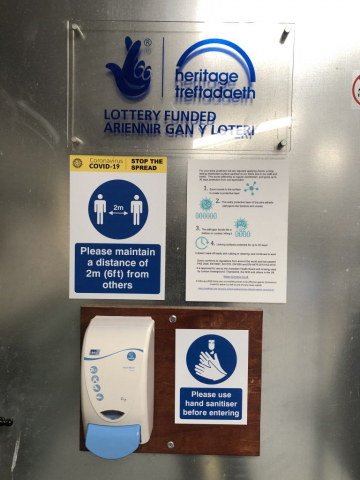 As widely advertised, and featured in last month’s news, all bookings must be done online and this has proved to be a real boon because now passengers know whether they have spaces or not. IT maestro Tim Williams deserves much credit for a system that works ‘straight out of the box’. On top of that, if a call comes in about space availability, customers can be told straight away what the latest situation will be, and by dint of nothing simpler than a rapid look at a smart-phone. Another useful feature now in place is a fairly regular post on the BLR Facebook page detailing which loco is in service on any particular day, plus who is on the footplate. This page, c/o Tim Gregson, is also highlighting future events, so regular scrutiny is definitely beneficial.

The first train post-lockdown departed on the 9th July, and was applauded away by a company director with the ‘Ivo Peters’ Bentley in attendance, to add a certain gravitas and sophistication to the occasion as it was the first heritage departure in Wales. As General Manager David Jones commented; “We wanted to have a ‘soft’ opening ahead of the summer holidays. We are all in such uncharted territory and it is important not only to exercise safe practice but also to ensure that everyone feels confident with the new safety measures and procedures”. David also added that the BLR was particularly grateful to the Welsh Government for ‘life-saving’ support during the crisis. The BLR was among several heritage lines to benefit greatly from a grant by the National Lottery, in this case £40000. 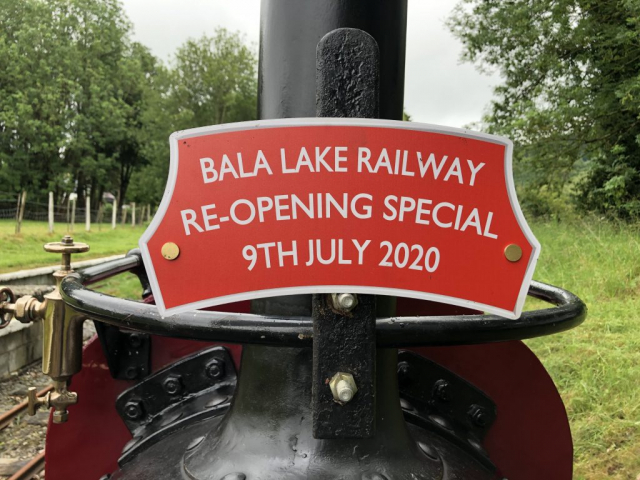 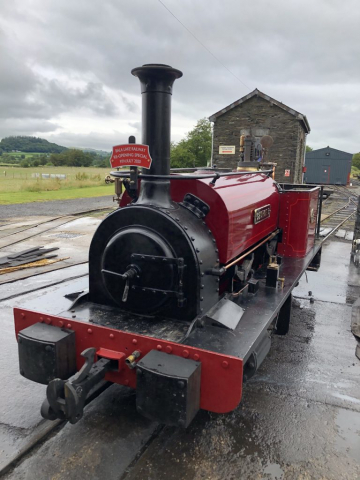 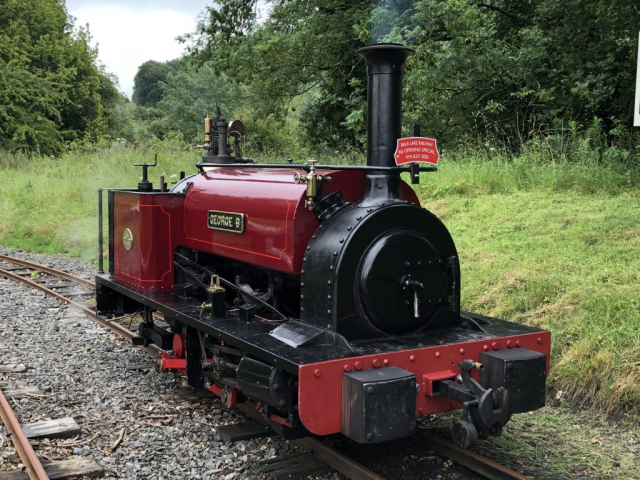 The Chippy Train was the first of many planned events and took place on the 30th. Tickets for this special sold out very quickly and the 88 passengers were treated to a run down to Bala in glorious evening weather, after which the train stopped in Llangower where the local chippy had set up shop to cater for the passengers. However, it turned out that the locals had got wind of the new location and arrived at the same time, thus the booked passengers had to exercise patience while the caterer dealt with the surprise larger-than-expected response for fish, sausages plus vegetarian options. How does one keep a good idea secret? 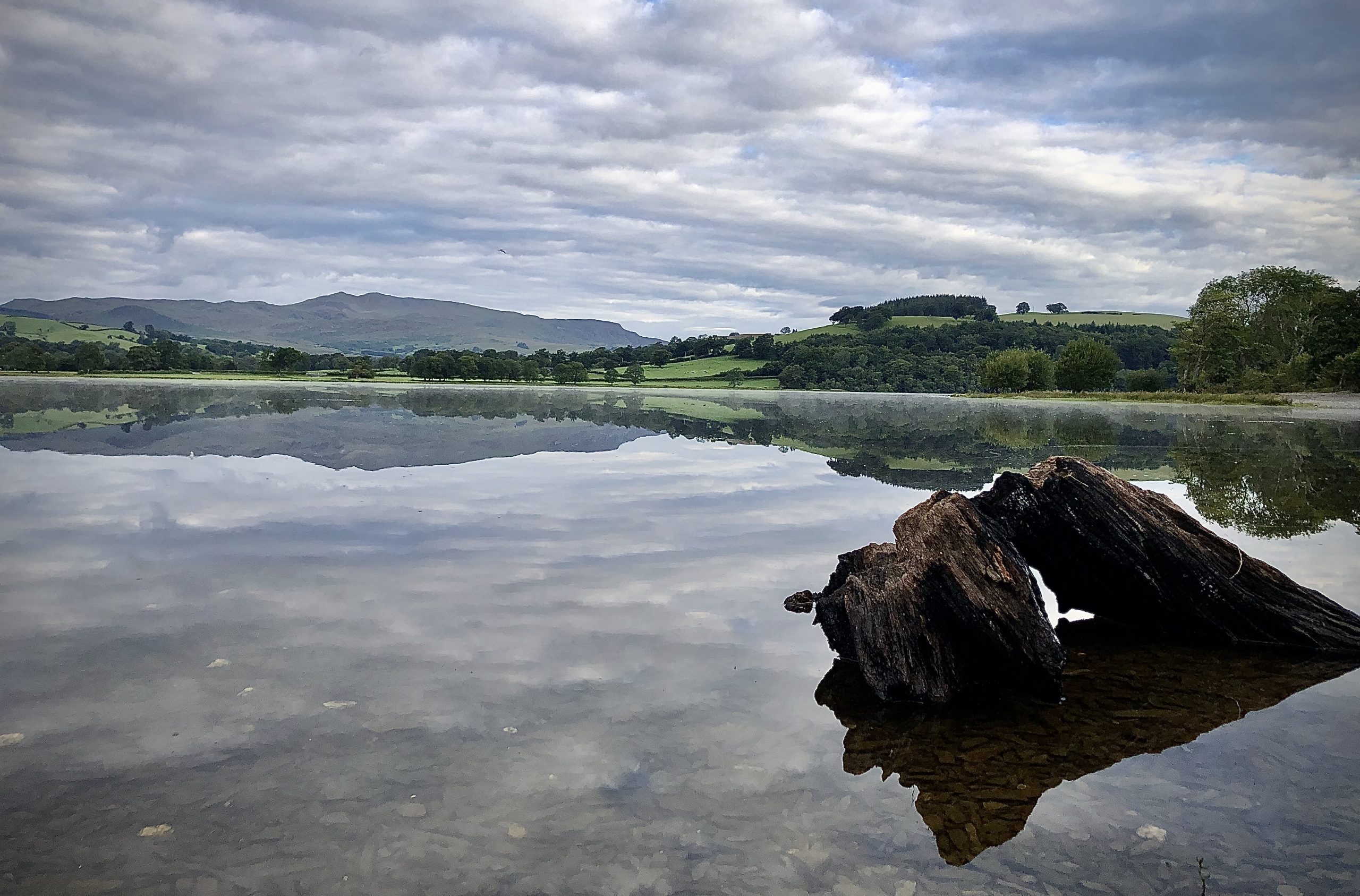 In the meantime, our locomotive fleet of Hunslets is running with three, and we currently alternate between George B and Maid Marian. While Winifred is entirely serviceable, she is currently having a well-earned rest in the Heritage Centre which has been painted and cleaned, ready for new visitors. Even our reserve diesel, Chilmark, has found a new home there for the time being.

Of the other two steam locos, Alice is awaiting the fitment of her new boiler which is part of her ten-year strip down so it will be quite a while before she graces the rails again. Holy War is in the middle of her ten-year overhaul and is down to her bare chassis in the workshop. Currently, Chief Engineer Rob Houghton, when he is not doing an occasional stint on the footplate for light relief, is attending to her axle boxes and bearings, so these two locos will be ‘work in progress’ for the foreseeable future. In the meantime, the workshop has had a mighty spring clean and is now resplendent in new white paint.

Our annual Volunteers’ Day is still scheduled for Sunday 13th September and Russell Prince is much looking forward to welcoming another batch of potential volunteers who will be able to try whatever they want in the most delightful surroundings. If you have not already signed up, please contact the BLR straight away. It will be a day you will not regret and no experience/reconnaissance is ever wasted, particularly on the BLR.

Further information is available on this website by clicking this link

The BLR Trust is working away on the big extension project and, lest it fall out of focus because of the pandemic, Chairman Julian Birley issued the following ‘state of play’ announcement.

It was with great excitement that the Bala Lake Railway was the first heritage railway in Wales to re-open after the enforced lock-down. It has been so sad for everyone to watch the rails of our wonderful railway go rusty during the beautiful weather of early summer.

However, behind the scenes, work has continued apace on the lengthy preparation of the planning application for the extension into Bala town and it is hoped that this will be ready for submission by late autumn. Being a new railway formation and being built in such an environmentally sensitive area, this application is incredibly detailed and involved, and the current cost is standing at £140,000. All the signs coming back from the consultant engineers who are working on this are that, providing we jump through all the hoops and tick all the boxes, then permission should be forthcoming.

Where we can, we have continued to fund-raise and the belief and support in the project continues to grow.

Out of every crisis, there are opportunities and our present situation with the pandemic is just one such opportunity. With foreign travel being so badly decimated by the Covid-19 outbreak and likely to continue for possibly years to come, here in Wales we are looking to welcome so many more visitors in need of a well-deserved holiday but who have decided to stay in the UK. While there has always been such a strong commercial business case for the railway to reach Bala, the situation has now intensified dramatically.

With the new main station situated just off the High Street and visitors starting their journey from there, the railway draws itself, the town and the lake much closer together and by doing this, Bala becomes a place of destination rather than a town just to pass through.

Come and see us and, as always, thank you for your continued support.

As a perfect epilogue to the highly successful BLR Virtual Gala where, amongst numerous items on offer, those who had purchased virtual buckets of coal were commemorated on film by BLR Director Julian Birley who filled a bucket of real coal for every single one of the generous buyers and thanked them by name for their kindness as he poured the full bucket into the bunker of ‘George B’.

And finally……… one very minor aspect of the BLR running again is that new supplies of bird feed has been received, much to the delight of Bernard Allman, our regular signalman, who has taken over the mantle, in an occasional quiet moment, of keeping the hungry little perishers contented. It only took but a few minutes after the feeders were refilled for the ravenous horde suddenly to descend out of nowhere and en masse. Judging by the noise, we can content ourselves that Bernard’s efforts are appreciated.