What a month! As the pandemic and ensuing restrictions have put a monumental spanner in the workings of most things, the BLR is proud to state that for the month of August, passenger revenues were less than 10% down on August last year! Ironically, the pandemic did actually help too as many were apprehensive about going abroad, with its varying and indecisive quarantine worries, so stay-cations were the order of the day – and how the railway has benefited. In spite of very variable weather, the month was most successful and over the Bank Holiday weekend, extra coaches had to be attached, such was the demand, with two days during the month being completely sold out.

The on-line ticketing system worked very well and impromptu arrivals were accommodated as much as possible within the socially-distanced space available. The joy of the new system means that those who want to break their journey and explore Bala, coming back on a later service, can be accommodated with relative ease. For the bank holiday weekend, we also used our mobile booking van at the Bala end of the line which made things easier for drop-ins. With a maximum capacity of only 60% of the normally available seats to allow for social distancing, not all parties were of the ideal six in number so some trains looked as if they were only half full but such are the necessary restrictions and precautions.

Huge thanks must go to all the staff and volunteers who worked flat out to make the month, and in particular the holiday weekend, such a success. Allied to this success, we received lots of 5-star reviews and volunteer Tim Gregson monitored these carefully and posted almost every day on the BLR Facebook page, as well as listing which locos were on duty.

Over the Bank Holiday weekend, a simple but ingenious variation was employed, namely the two trains in service were pulled by three locos, Maid Marian, George B and Winifred, the last of which being roused from her slumbers last month and was she sleepy, with the first crew taking much longer than usual to get her to wake up and get warm! (Many say Hunslets are almost human). Using three locos meant that the pressure on loco crews at turn-around in Llanuwchllyn was greatly reduced, plus there was always a loco standing by for the next run. On top of that, a loco simmering in the (mostly) sun was an attraction for those waiting around the station. 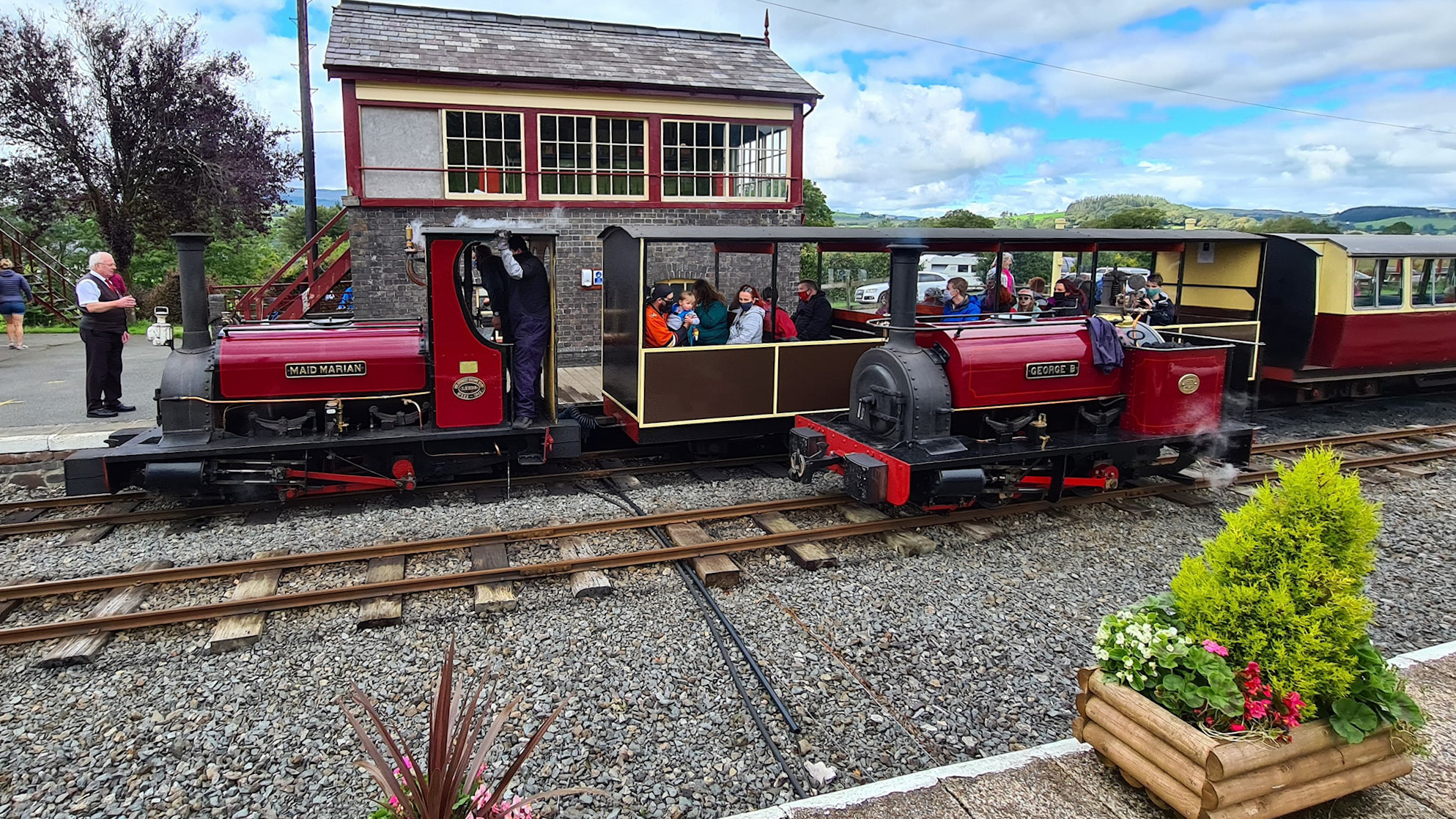 Also during the Bank Holiday weekend, the mobile webcam at Llangower was live and many enjoyed watching two trains crossing. This feature is now a regular item for special occasions and is much enjoyed by those who cannot be at the railway.

Two new internal phones have been installed in the signal box and the loco shed, and there will be more to follow.

The handsets and some of the cables were donated by Richard Sterne. Allied to this, new volunteer Mike Belham teamed up with regular Tim Williams to install a PA system which is working well with more outlets to follow. 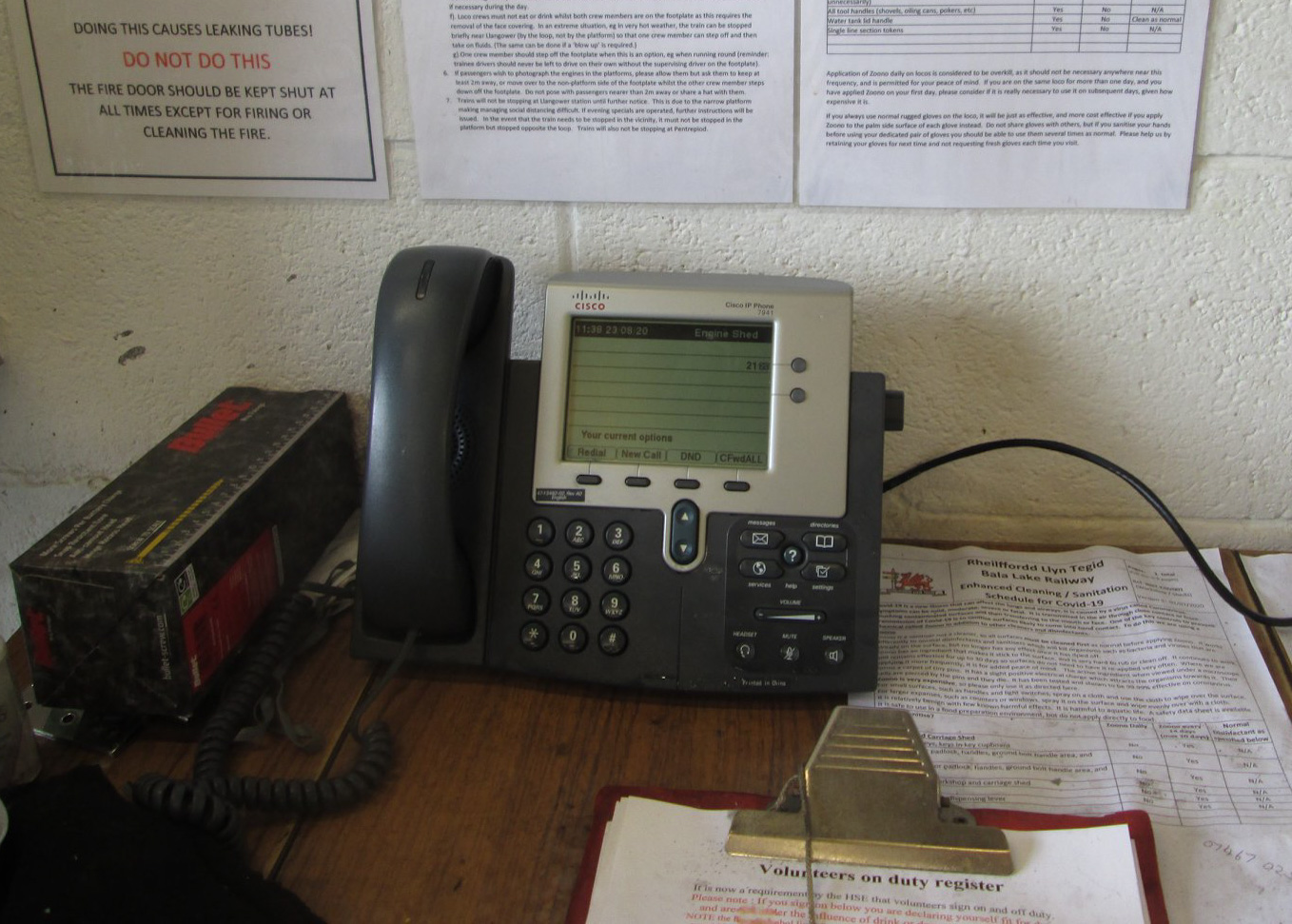 As a direct result of lost income because of this pestilential pandemic, we are launching our Sponsor a Sleeper Appeal. This is to help raise funds for a large programme of winter maintenance and major infrastructure improvements, and the attached link will give you all the details. In a nutshell, you can sponsor a full sized sleeper which will be chopped half for our narrow gauge purposes, a ‘narrow gauge’ sleeper plus other variations, and all donations will be gratefully received. While we cannot inscribe names on any sleepers, we hope you will derive great pride from knowing that your sleepers will be doing great service on the line for many years to come.

Please help us if you can! Follow the link and watch the 4 minute film made last year while track work was taking place and which shows exactly what is involved, lifting old sleepers, grading and tamping down the ballast followed by laying new sleepers and replacing the rails. The film is inspiring, not least with a remarkable impression of the late lamented Fred Dibnah by our own Steve ‘Fake Dibnah’ Jones. Close your eyes and you will not know the difference. It also shows what fun this kind of volunteering can be on the BLR. It may be strenuous but it is so rewarding.

Talking of volunteers, it is not too late to sign up for the annual Volunteers’ Day on Sunday, 13th September. Regular driver Russell Prince will again host a day for showing potential volunteers all the various aspects of a heritage railway, from guarding and footplate work to track maintenance and everything in between, and all of it in the wonderful surroundings of the Snowdonia National Park and Lake Bala. As working railway environments go, there are very few to beat it.

It grieves us to have to report this but there are dates in the calendar which have had to be cancelled because of the virus. Firstly, the BLR Model Railway Show, originally rescheduled for the 26/27 September has been shelved as the venue, the main school in Bala, cannot run the risk of any form of outbreak during term-time. It is hoped to reschedule this always popular event again for May or September 2021, so please watch this column for future details. Likewise, because of social-distance issues, we have most regretfully had to cancel this year’s Halloween and Santa Specials. It just would not be the same if Santa had to keep his distance from the kids .

BUT, the proposed ‘Bala Station Party’, where Winifred will steam on a short distance on track laid in the new Bala Station site, is now rescheduled for June next year. Again, we will bring you details as they emerge for this unique and historic occasion where, quite literally, ‘steam will return to Bala’.

The BLR is to have a New Arrival. Let us provide some synoptic background to this intriguing tale.

2006 was the 40th anniversary of the closure of the much-loved Somerset & Dorset Railway. A group comprising a top railway preservationist and BLR director (one guess), a former editor of Steam Railway Magazine plus a couple of others, hit on the ultimate SLAGI (seems like a good idea) and approached the ever-obliging owner of a former S&D 7F which was to be moved from its base at the Midland Railway and loaned to the West Somerset Railway for their commemorative ‘celebrations’. The idea was to ‘divert’ the loco for a few hours and install it in the former train shed at Bath Green Park, now a Sainsbury’s car park. The owner graciously agreed (no doubt with much fretting) and during the night, Network Rail arrived to place some track panels. The tender then arrived, followed by the 7F loco, the transporter of which had used a one-way street the wrong way, albeit with police blessing as this was in the very early hours and there was no other option. Shoppers arrived the following morning to be greeted by a scene almost perfectly recreating that of the early 1960s and emotions were evident. One shopper was in tears as he had ridden to school behind that very loco, and you did not need to be an expert in lip-reading to deduce the expletives of others! Late the following night, everything had disappeared and the car park had been returned to its normal state. It was a truly inspired bit of positive thinking, opportunism and a remarkable achievement.

Fast forward a few years, and the relevance of that delightful reminiscence will become clear. This self-same owner (who, by sheer co-incidence, was at one time also a work colleague of the BLR General Manager) and his wife, both of whom have become regular volunteers at the BLR, have acquired a 2 foot gauge Avonside 0-4-0 side-tank loco from Australia and she is coming to live at Llanuwchllyn, her arrival to be towards the end of October. She is one of a pair which was built in 1922 for a sugar plantation in Queensland. Sadly, her sister was scrapped years ago while this one has not steamed for nearly 60 years, but once refurbished and restored and hopefully in time for to celebrate her 100th birthday, she will be a wonderful addition both for display in the BLR Heritage Centre and to the working fleet, and the BLR is most grateful to her owners for choosing Llanuwchllyn as her new home. 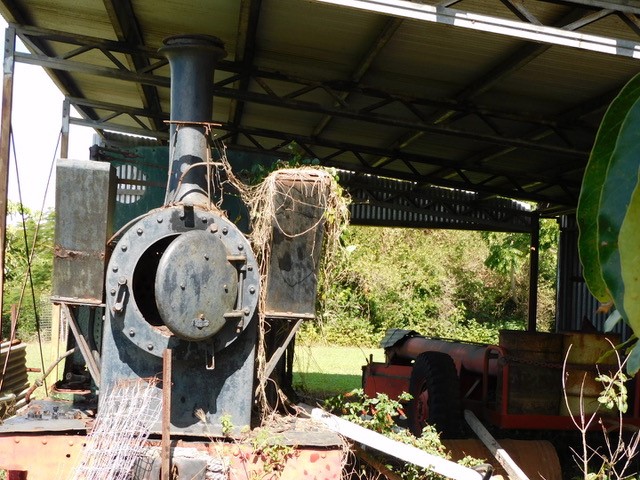 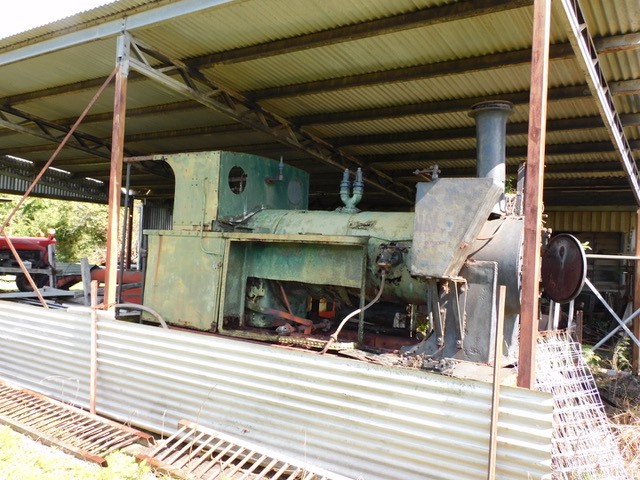 And finally…… we are delighted to welcome another new arrival. During August, a tiny kitten of indeterminate age suddenly appeared at the railway and has since made it her home. She seems to have acquired the name Marian, after our loco, is very friendly, untroubled by strange loco noises, loves attacking ‘dragons’ in the long grass as well as sinking her fangs into playmates’ fingers, and everyone has fallen for her feline charms, to the extent that the engineering team immediately constructed a small ramp leading to her bed high in the loco shed to where she regularly returns, knowing that food and water will be waiting. Relations with Chief Engineer Rob Houghton’s dog Max are said to be cautiously cordial. She obviously has the right attitude as she has already given an unsuspecting mouse the fright of its life. Long may she stay. 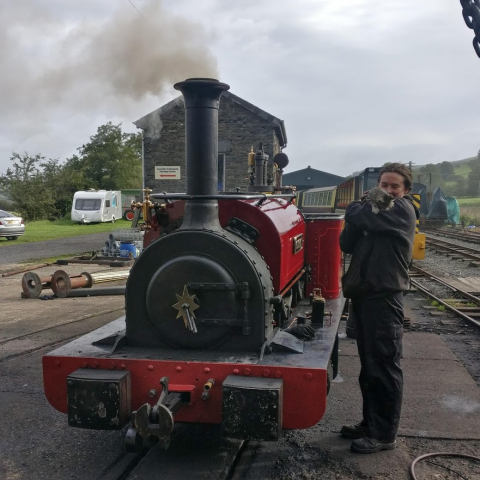 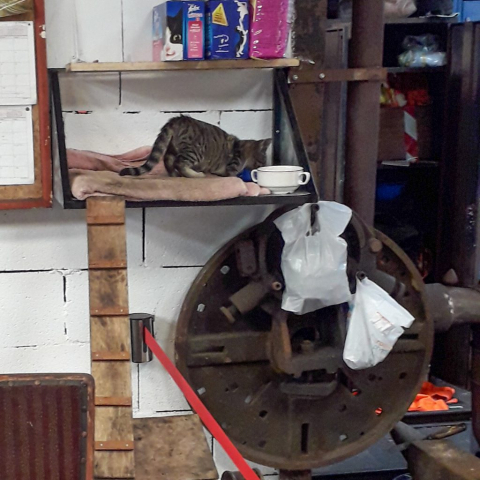 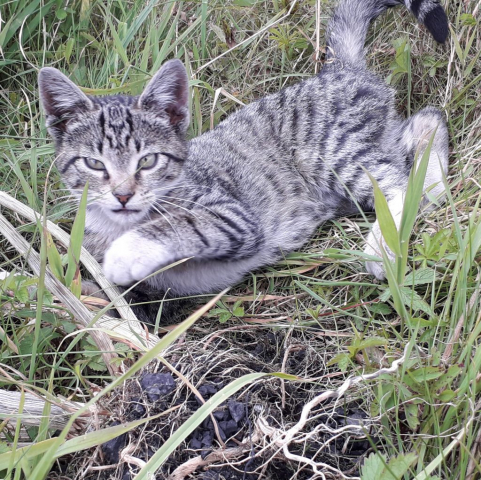