“It’s been our best summer season ever!”

So said David Jones, the Bala Lake Railway’s energetic General Manager, when asked about how the passenger numbers for August had fared. He, along with everyone involved with the railway, was effervescing, particularly as the actual August figures were – wait for it – 32% higher than the previous best-ever month. Many of the population taking holidays at home obviously helped enormously, and so many are now appreciating what Wales and indeed other parts of the UK have to offer. We are just delighted that so many chose to experience some serious home-grown fun around Llyn Tegid. We are grateful to you all.

On top of our record passenger numbers, the BLR is immensely proud to announce that the railway has won another Travellers’ Choice Award from Tripadvisor for providing excellent and friendly service to customers. Indeed, that word ‘friendly’ appears often in personal testimonials by visitors, and the staff and volunteers at the BLR are only too happy to smile and offer that little bit extra. For example, letting a small child, albeit under the watchful eyes of the loco crew, step briefly on to the footplate of a simmering loco in the station is no trouble and possibly a major ‘first’ for some. It is a classic case of so little going so far to make the visit more memorable. Smiles and courtesy cost nothing and the BLR staff, loco crews and volunteers have this down to a fine art.

The big event of the month was the Bank Holiday weekend Steam Gala which this year featured a guest loco from the Vale of Rheidol Railway by the name of Margaret. She arrived on the 23rd of the month on a de-mountable flat-bed truck in an identical manner as Winifred was moved to Bala for the Re-Railed event in June. This time, there was no concern about the visually alarming angles to which the loco was subjected for unloading, a now well-practiced procedure, and she settled into her duties immediately. 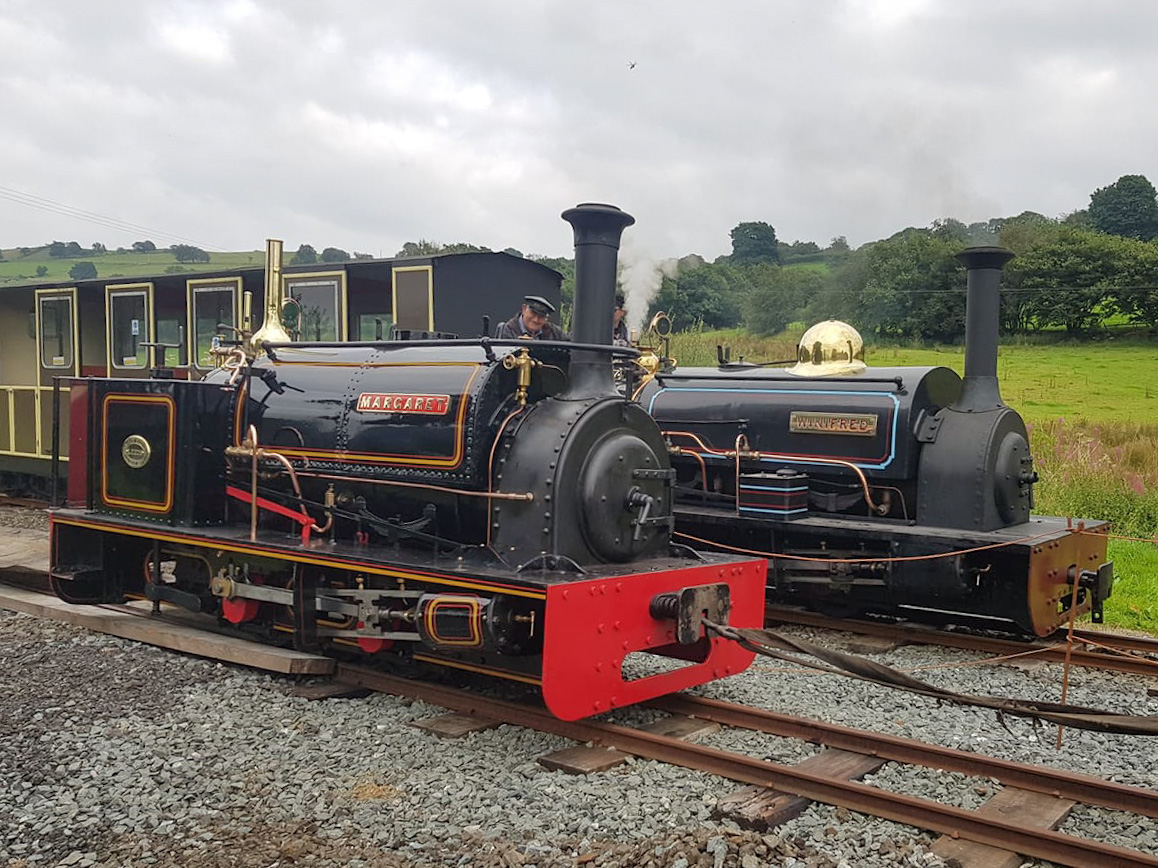 Margaret is another Hunslet but of the Penrhyn class, almost identical to Winifred, and was one of four ‘small quarry’ locos. She was built in 1894, a bit later than Winifred in 1885. Having spent her entire working life in the Penrhyn quarries, she was withdrawn in 1950 and basically left to rot. Purchased by the Vale of Rheidol Railway (VoR) in 1999, she was initially considered too far gone but careful remedial work slowly started and with the completion of the new VoR workshop, there was increased progress and she was finally steamed again in September 2015, the first loco to be out-shopped from that new building.

It was quite a spectacle to see the two Penrhyn locos reunited and the perfect excuse to couple them together for some glorious double-heading up Dolfawr Bank on the final approach to Llanuwchllyn. It was also interesting to note the intricate paintwork of both locos as Winifred sports the later lined livery while Margaret wears the earlier and more ornate original Penrhyn style and even has her frames painted and lined as well. Everyone enjoyed having this special visitor and the BLR extends enormous thanks to the Vale of Rheidol for the immaculate condition in which she arrived, something the railway and other organisations have come to expect from the VoR. She certainly helped to draw the crowds and definitely made a special weekend of fun even more so.

Keen photographer Chris Parry from the Ffestiniog & Welsh Highland Railways visited the Gala on Sunday and took the following set of 20 excellent photographs. 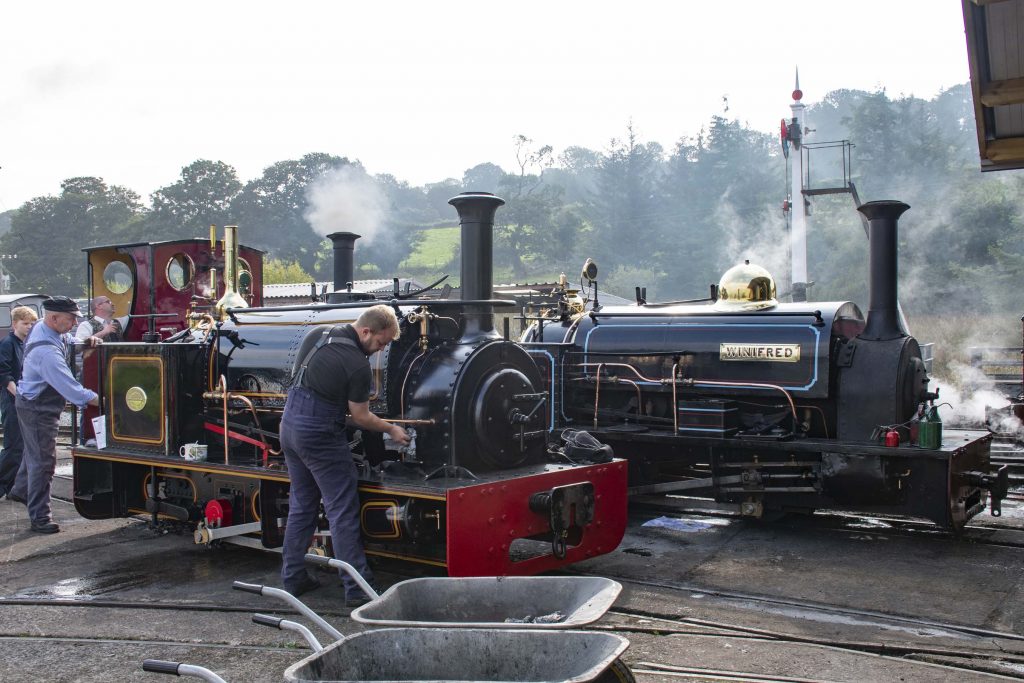 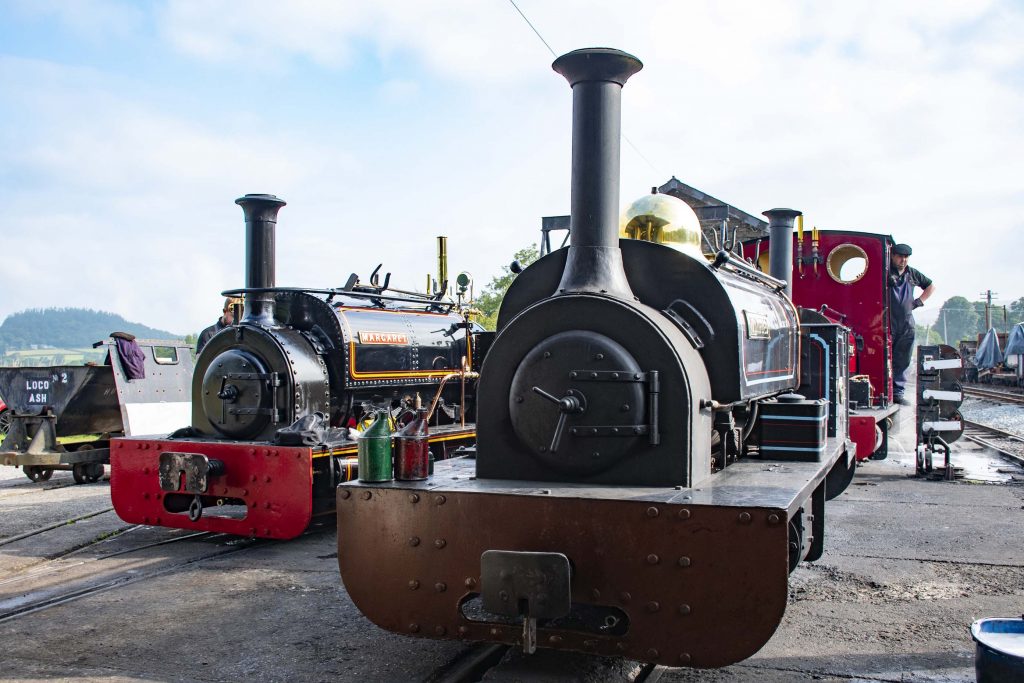 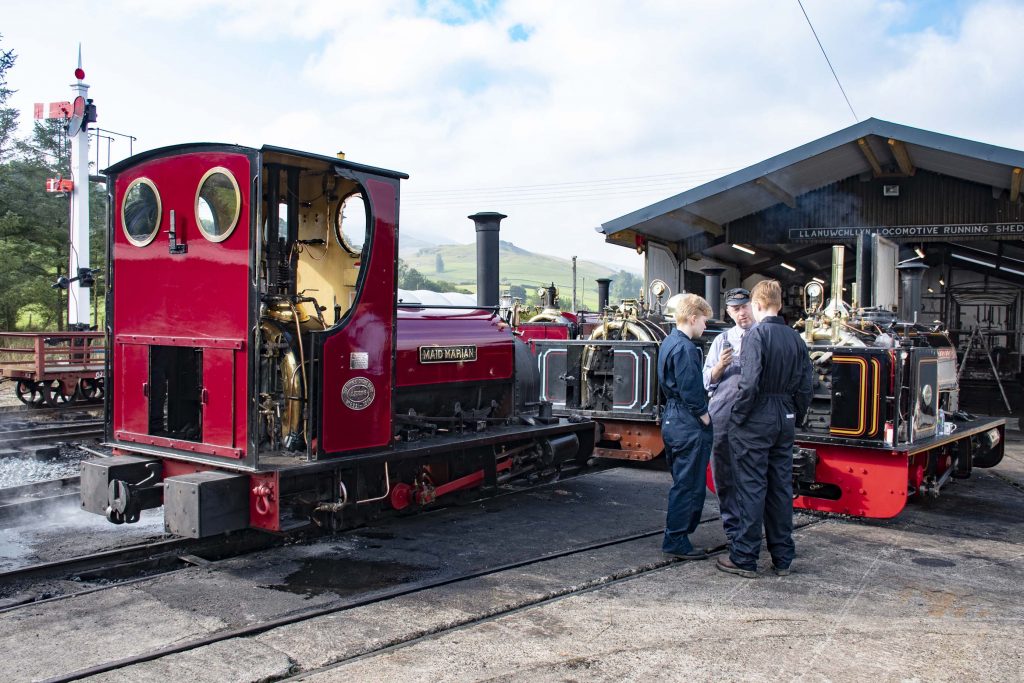 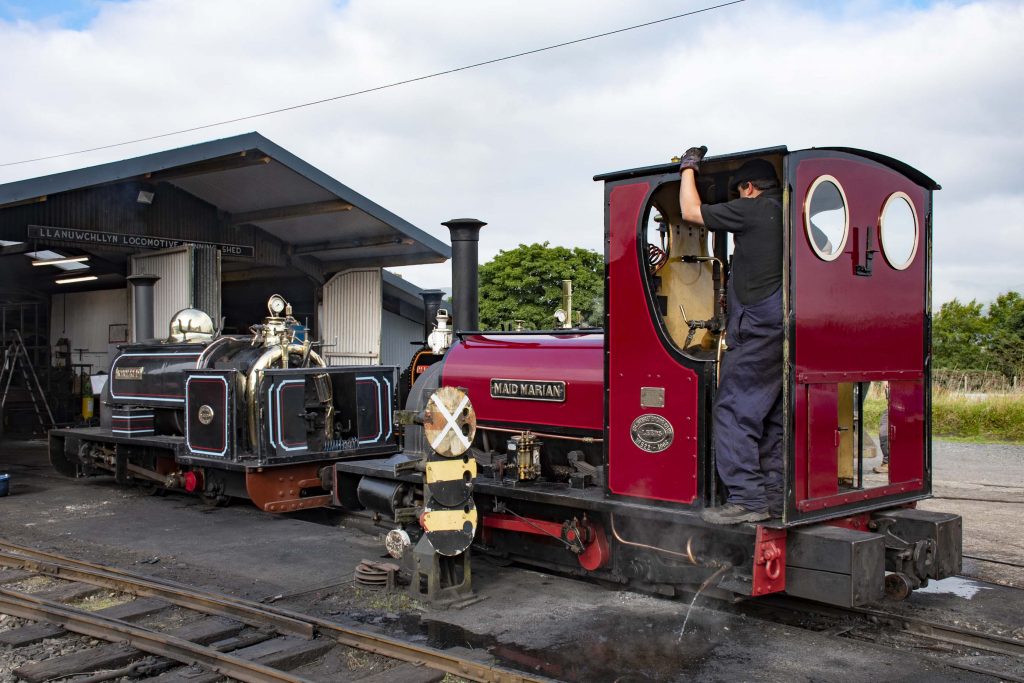 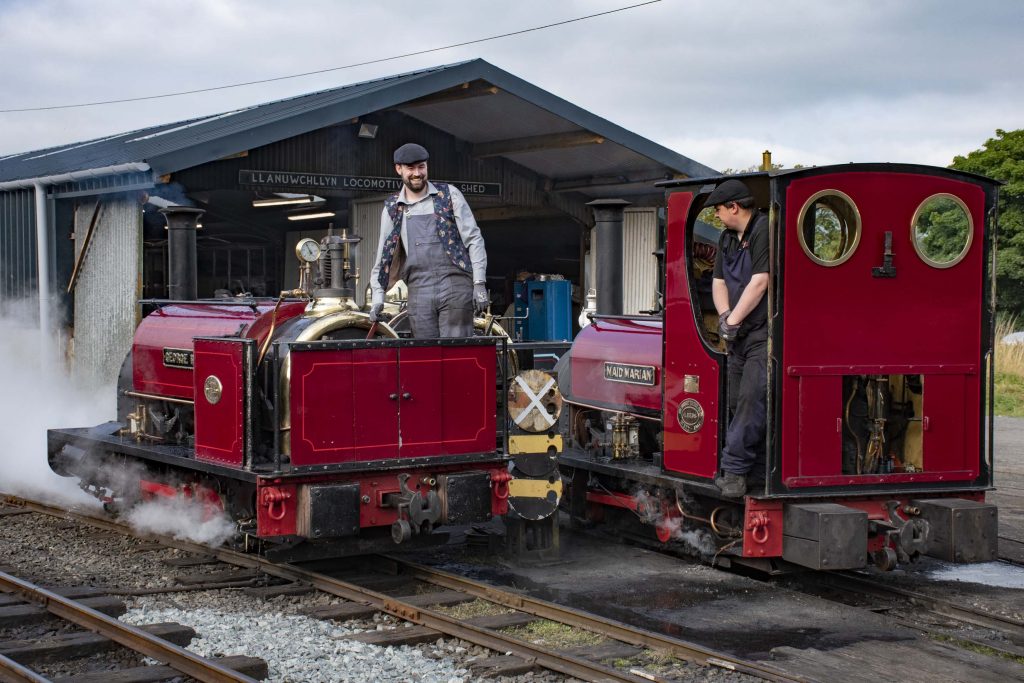 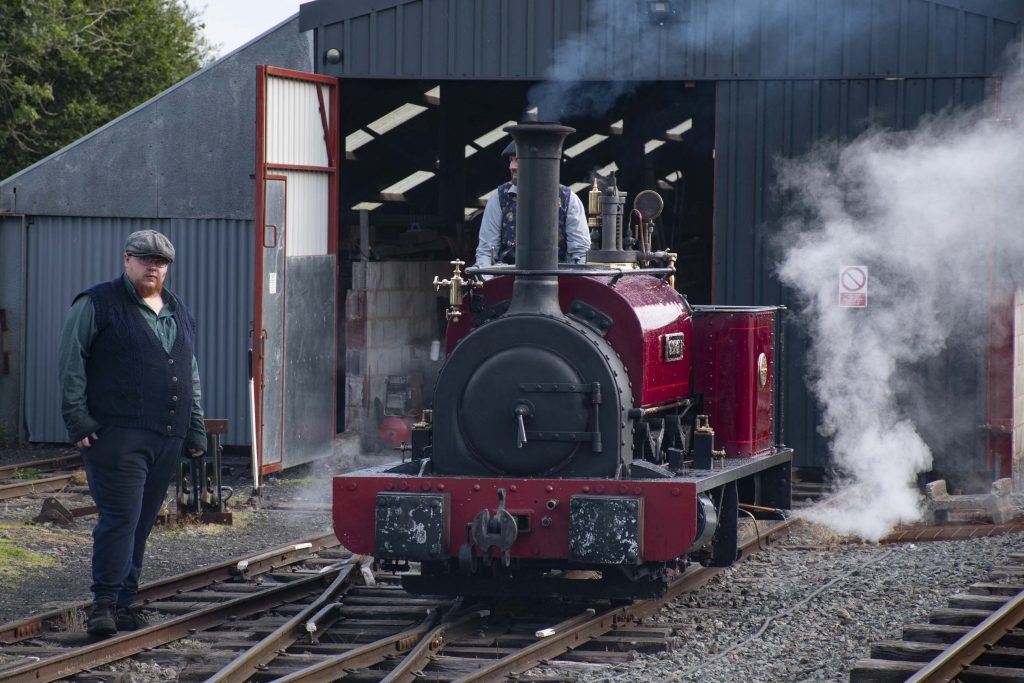 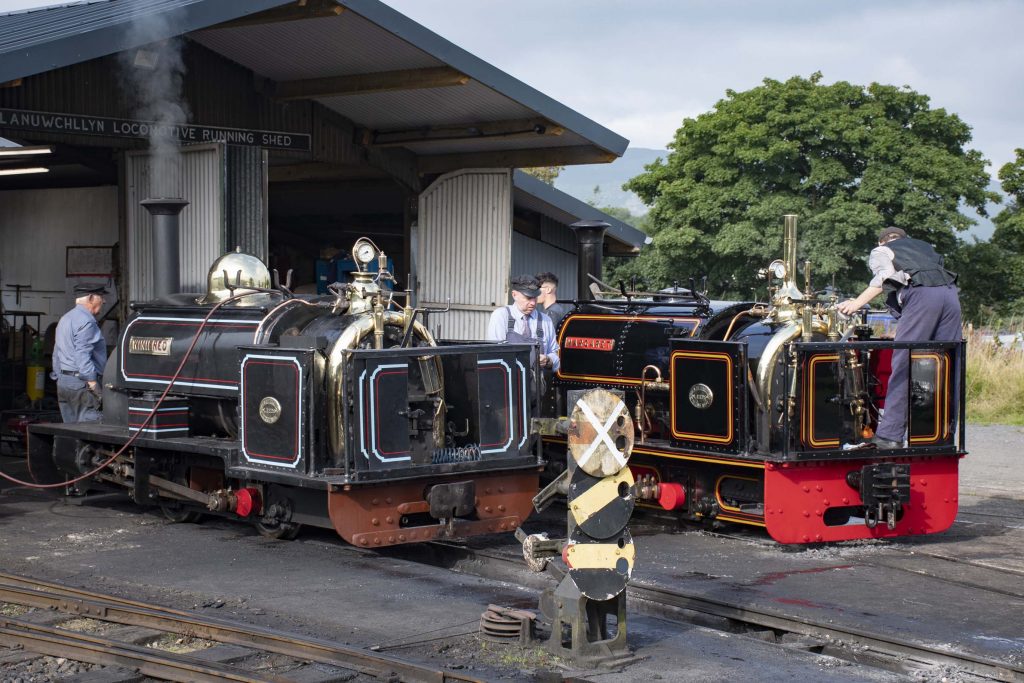 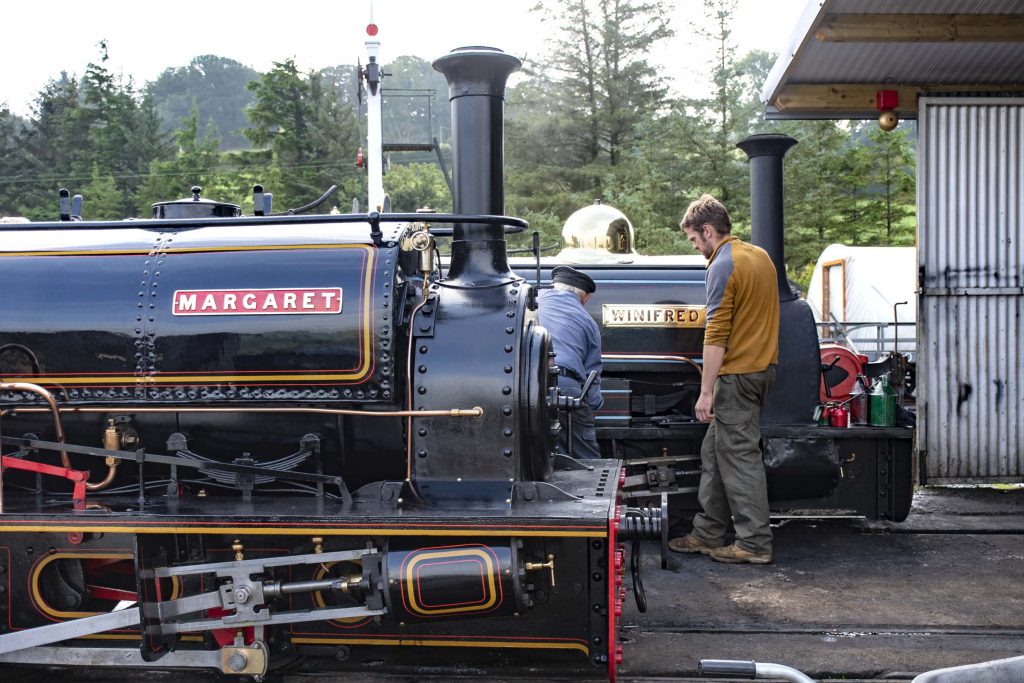 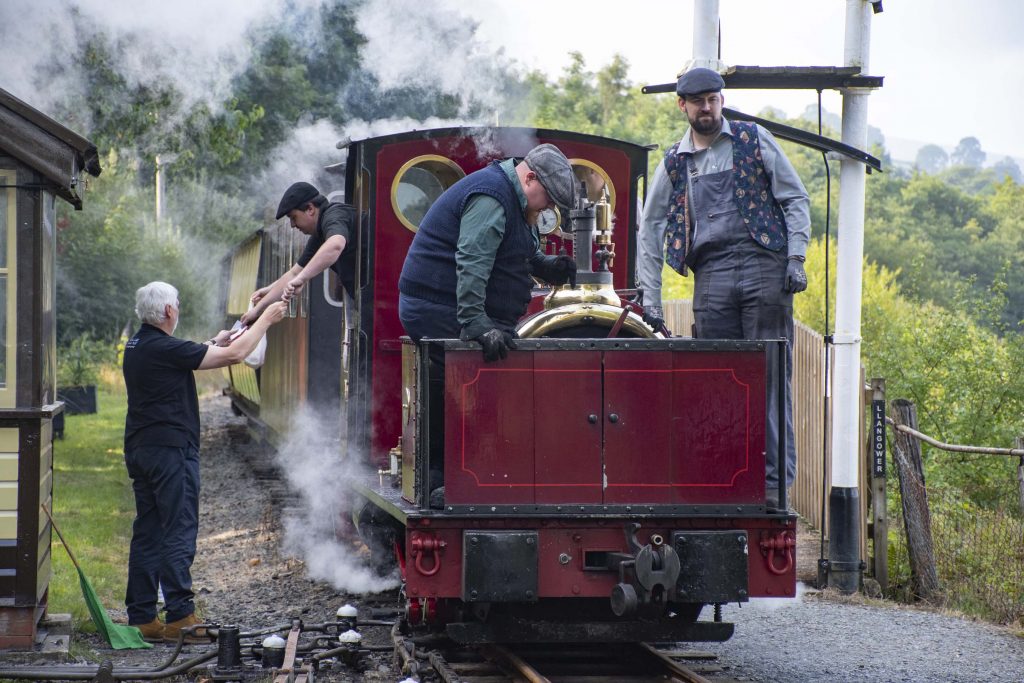 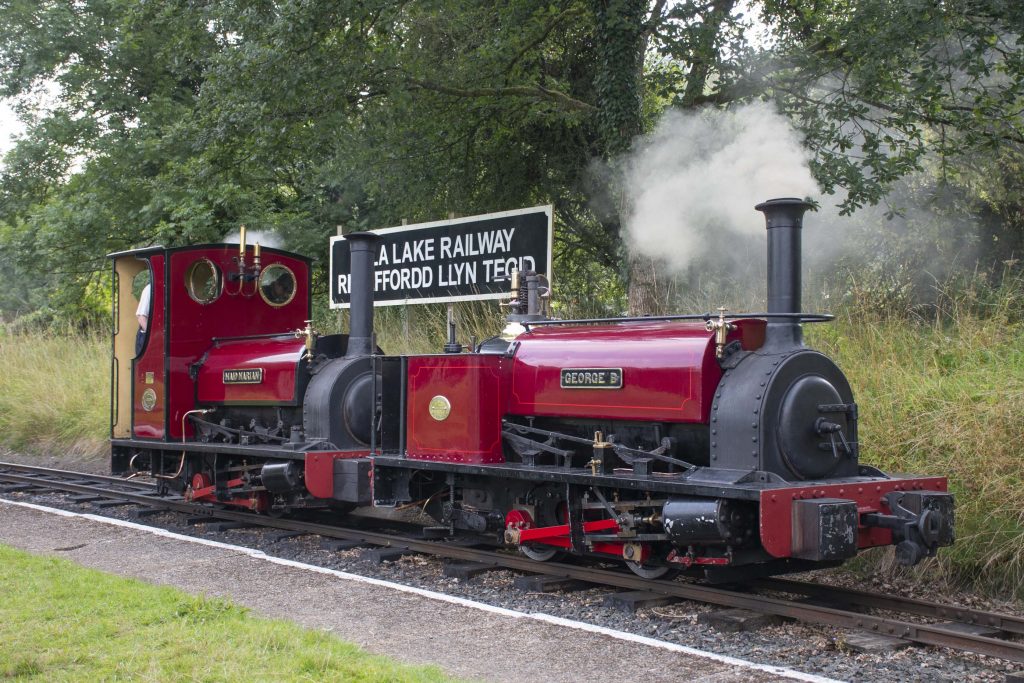 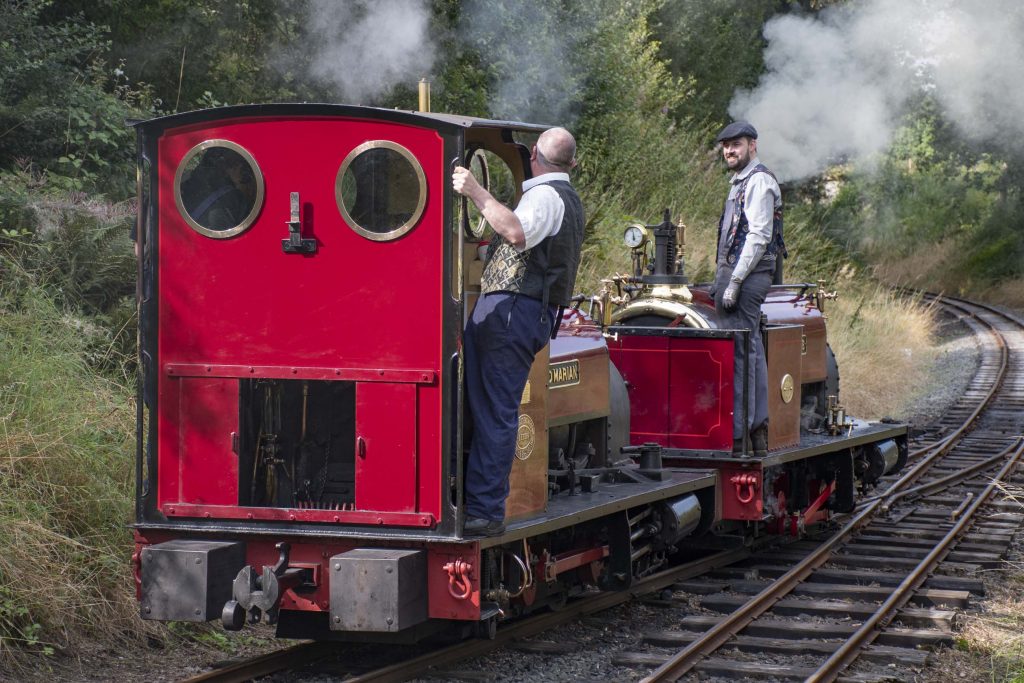 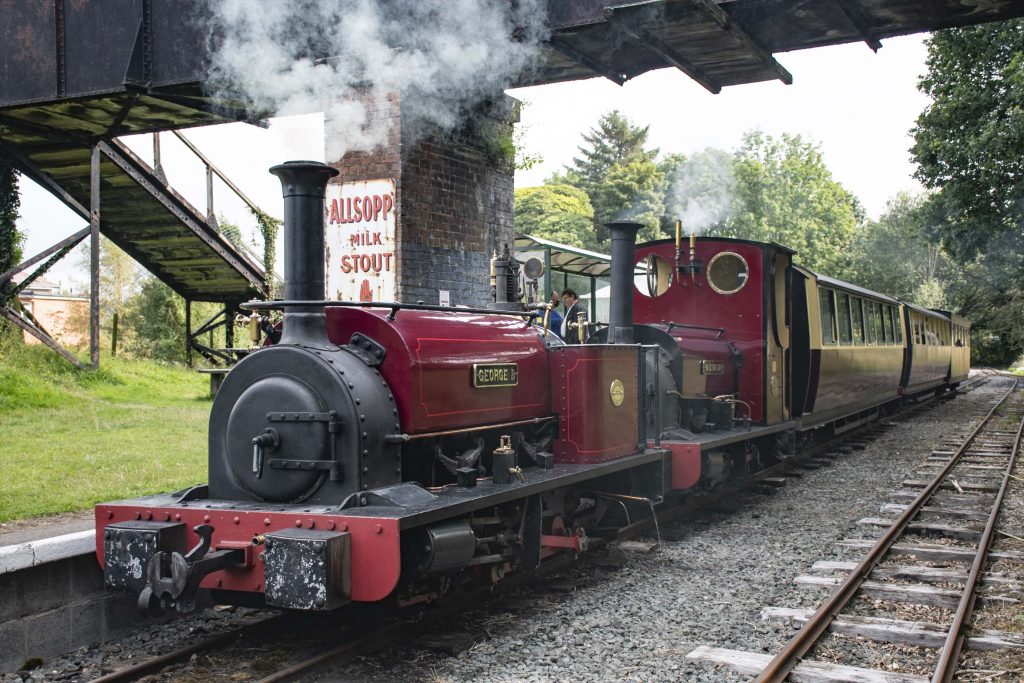 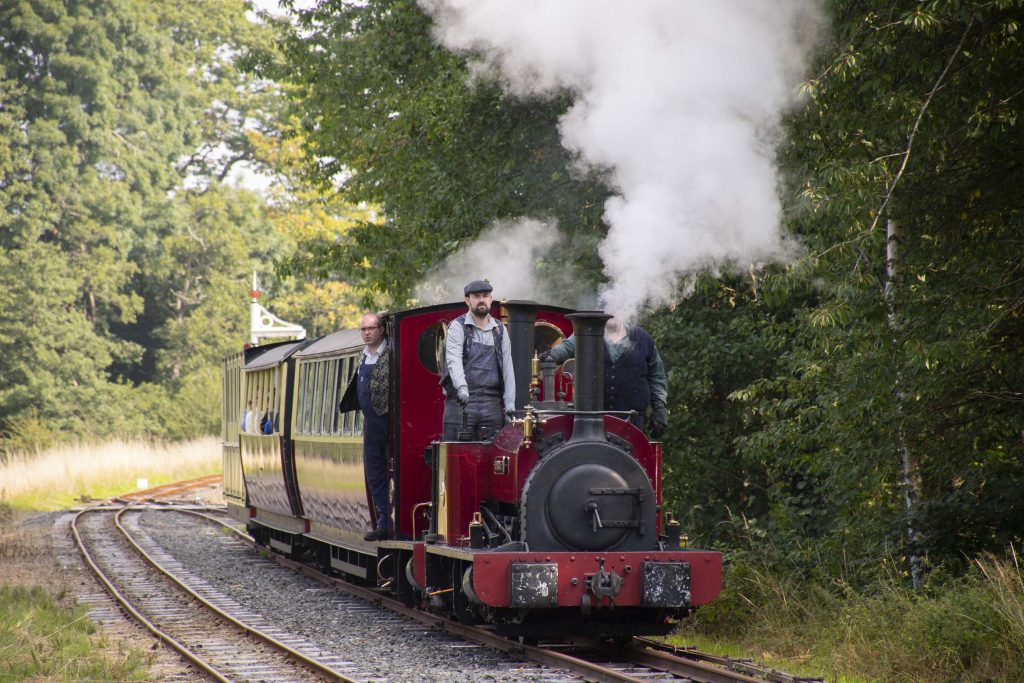 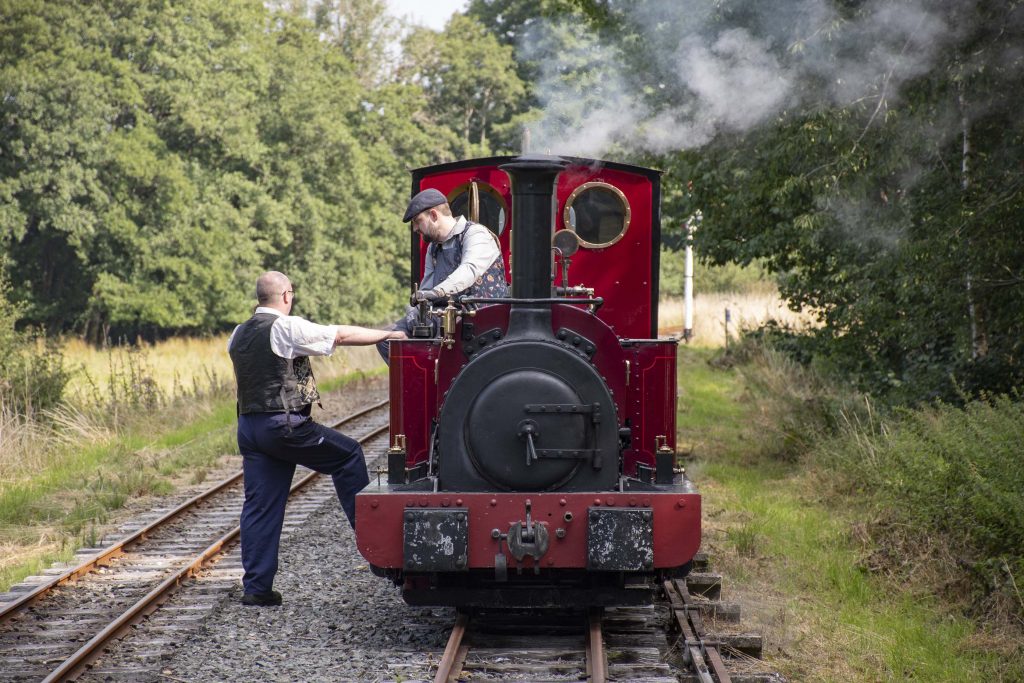 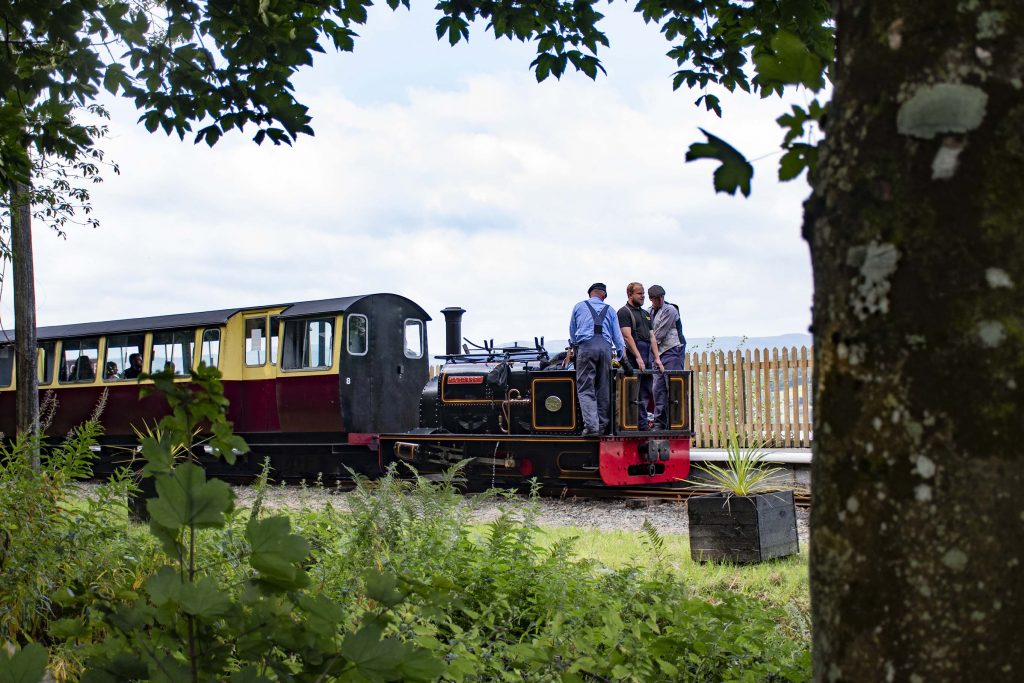 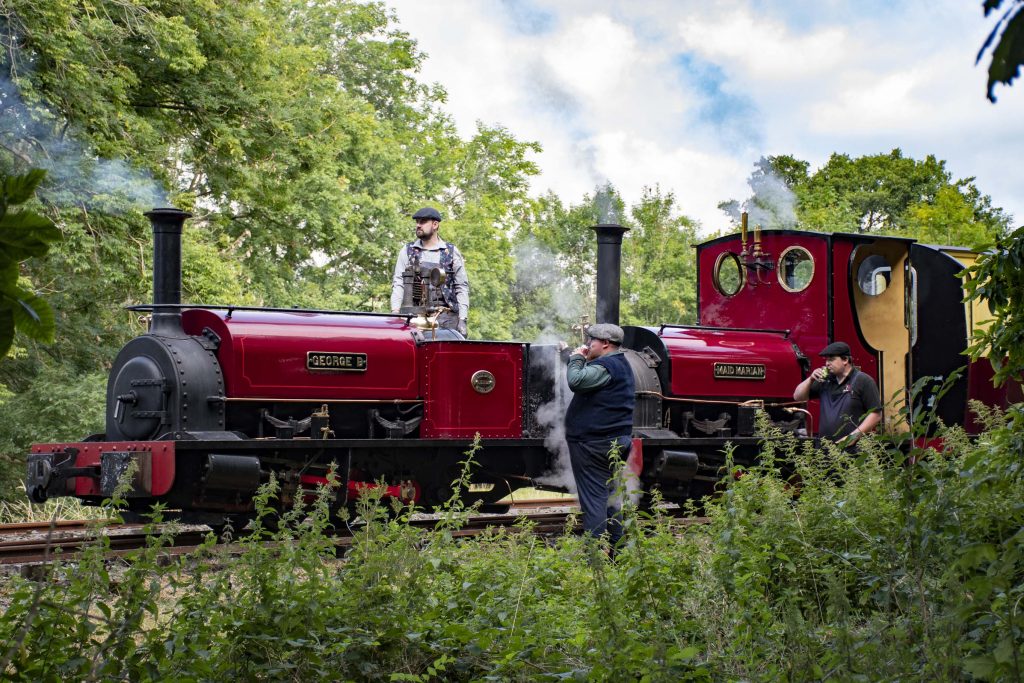 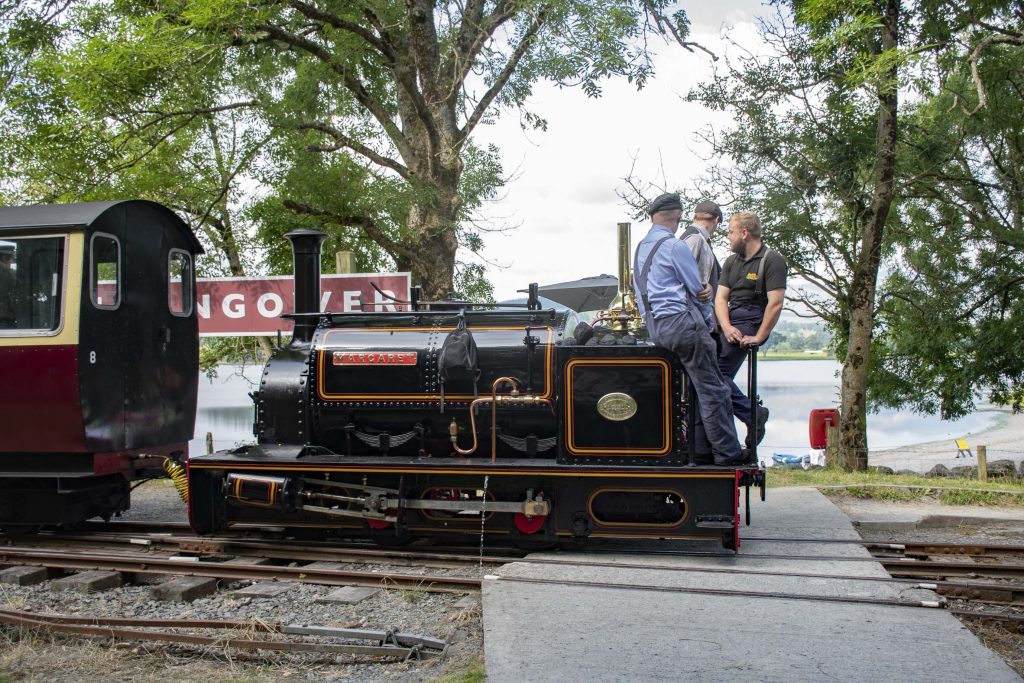 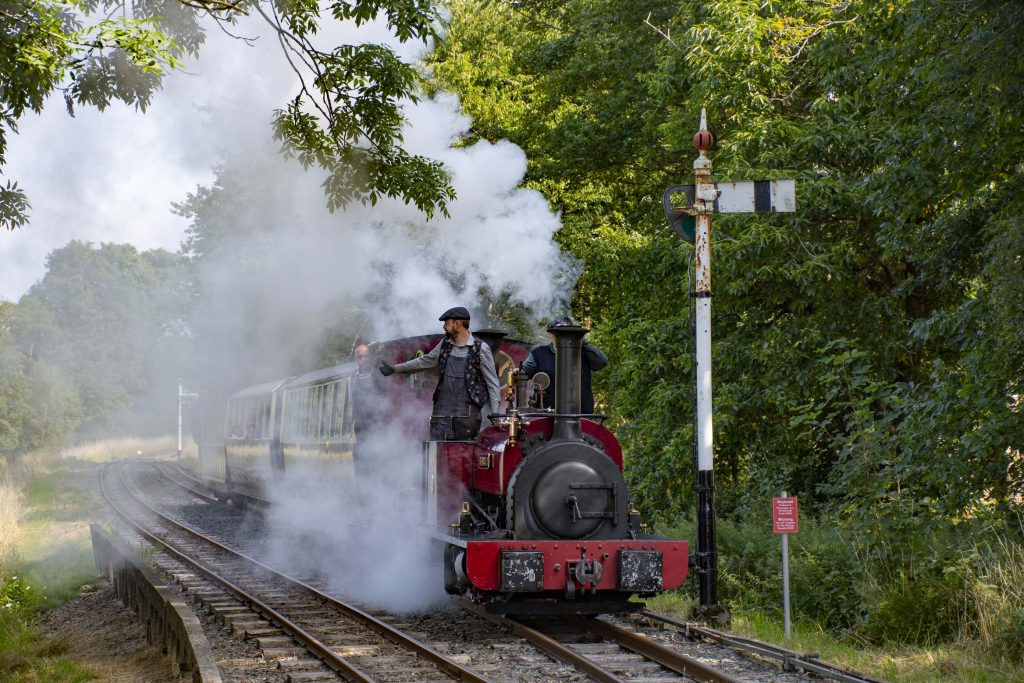 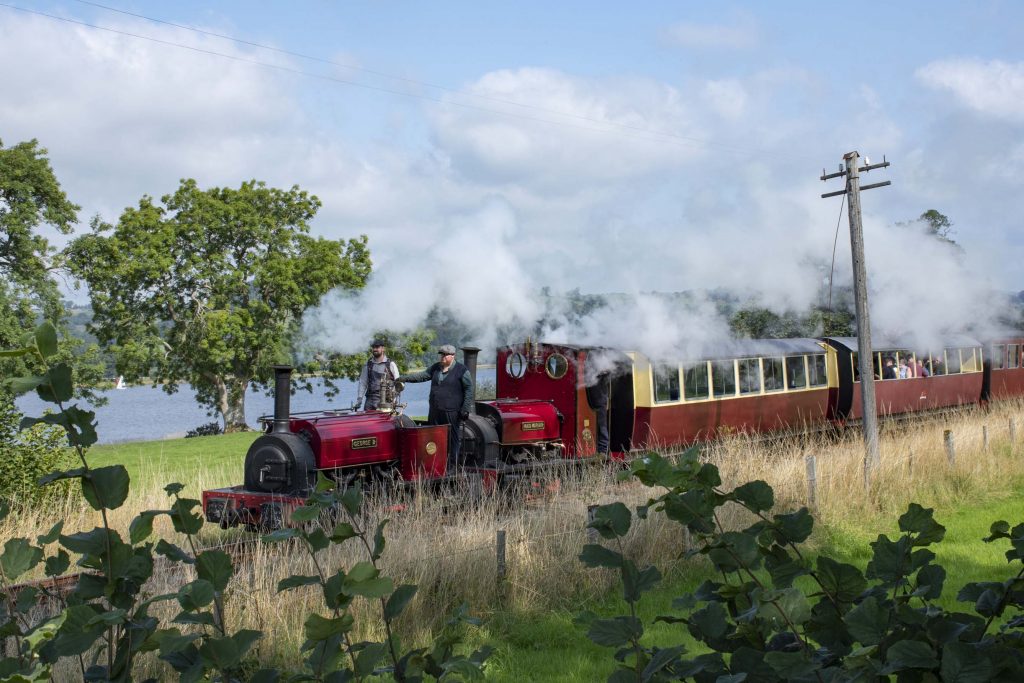 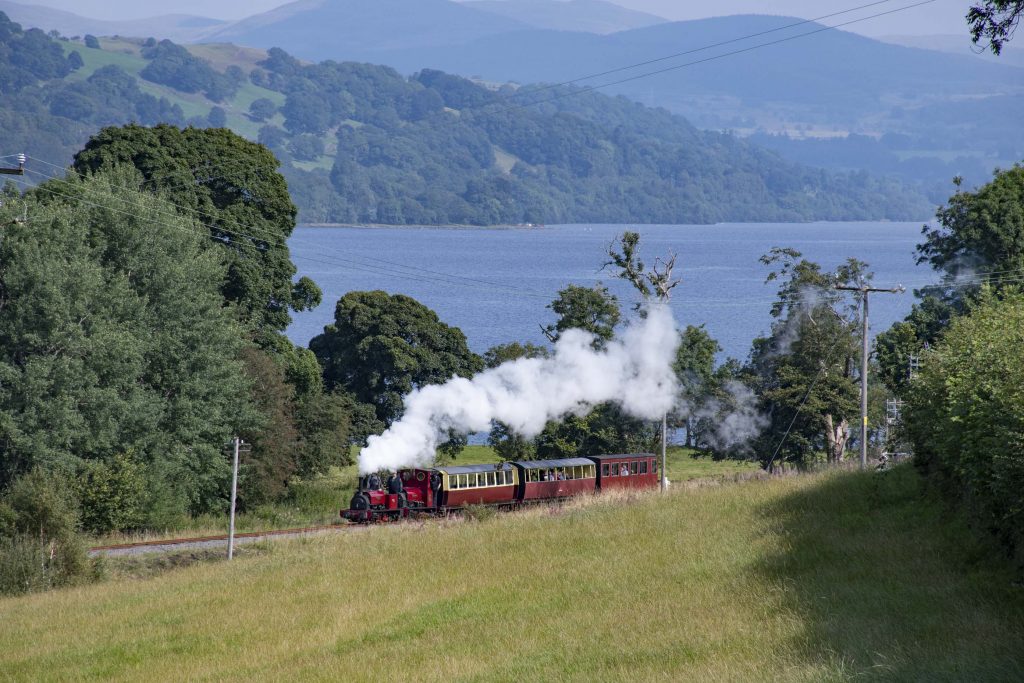 The BLR needs no excuse to schedule some serious train movements and apart from a two-train timetable over most of the weekend with cross-over at Llangower, a freight was put into the mix thus one of the first things that Llangower signalman Tim Williams had to contend with was the famous ‘Three Train Shuffle’ where two crossing passenger trains have to contend with the freight at the same location. It is a true delight to witness and thanks to Tim’s expertise on the first day, combined with excellent timing on the part of the loco crews, no problems arose. Loco crews and passengers alike enjoyed the spectacle. For the other two days, Tim kept a watchful eye on trainee signalmen Dave Rutt and Chris Jackson who ran things beautifully, the former indeed qualifying as a signalman on the Monday.

On the subject of specials, the three BBQ Trains during the month were completely sold out and everyone certainly enjoyed themselves, particularly with the BBQ being done as usual by Mark from one of Bala’s leading butchers. It was he who helped the railway so much with the catering at the Bala Re-Railed Event in June. Sadly, nobody was able to witness the legendary Bala Lake sunset as the clouds had decided to move in on each occasion but the views nevertheless were lovely. There is little better than an evening trundle along the lake before or after some of Mark’s culinary expertise.

A film company arrived in Llanuwchllyn during August, not the first time a film crew has chosen this location. Regular S4C viewers may recall Sir Bryn Terfel doing a piece to camera on the platform at Llanuwchllyn a few years ago as he roamed in song northwards in his home country, charming everyone along the way.

This time, a Welsh production company arrived in mid-August to make a film which follows on from the previous specials, The Coal House and Snowdonia 1890, where people were asked to live as they would have done many decades ago, the former getting the males to work down a coal mine with the women folk slaving away at home without any modern aids. This latest film is about war-time evacuees, mainly children from London and the Home Counties, who were billeted with Welsh families while their reaction to contrasting very rural life and a totally unfamiliar language was monitored closely. 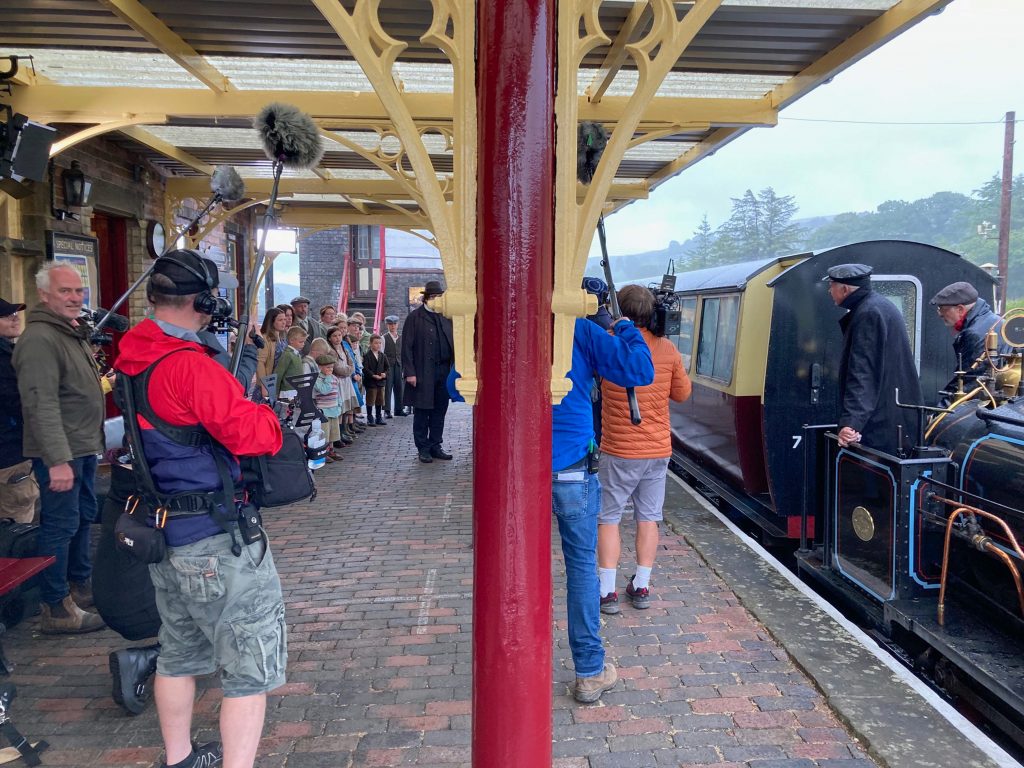 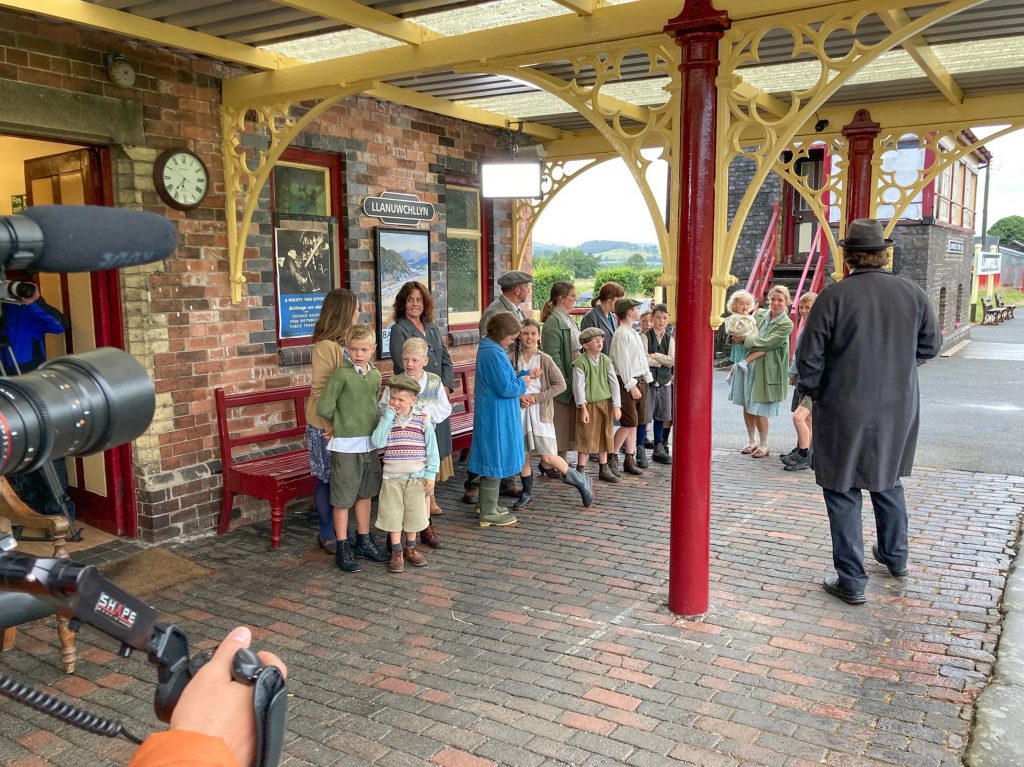 The filming took place at Llanuwchllyn on a Wednesday with Llangower on Friday and two filming runs were scheduled so as not to interfere with the BBQ train! Half a dozen English children were playing the evacuees with emphasis on how they coped with the complete contradiction of lifestyle and how they did or did not adapt. Likewise, Llanuwchllyn was given a serious make-over and converted to how it would have looked in those bleak times with no erroneous modern signage or platform markings, thus portraying exactly the diametric atmosphere from today.

The film will be broadcast as a segment of four programmes in December on Channel S4C, which is available on Freeview, under the title of Yr Efaciwis (The Evacuees).

The Two BLR Signal Boxes are receiving some serious attention and during the month, the Llangower box benefited from some fine upgrading to make it even more presentable. Likewise, work on the Llanuwchllyn box has started again with the arrival of a brand new staircase which is to be fitted very soon. When the day comes, the old steps will be whipped away, and whilst the new steps are being commissioned, our signalman will briefly have to use a ladder to access his domain, a matter thankfully of hours not days.

A Llangollen Railway volunteer by the name of Peter Dickinson has very kindly loaned the BLR one of the original running-in boards from the old Corwen station and while some may wonder why we would welcome something hardly relevant to the BLR, Corwen was a major station on the GWR line from Ruabon to Barmouth which passed through both Llanuwchllyn and Llangollen. 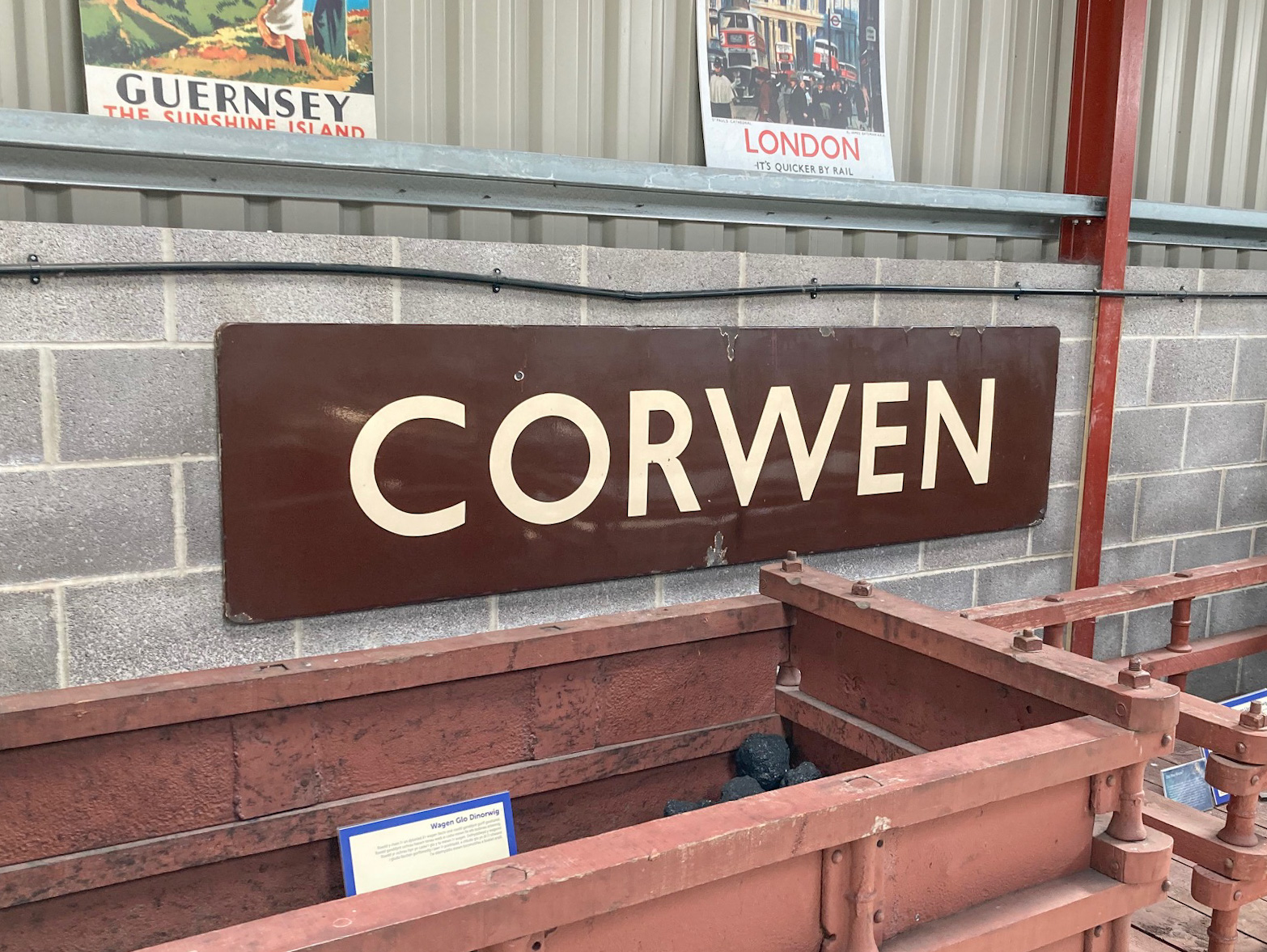 We are most grateful for his thought and kindness, and the board is now on display in our Heritage Centre.

We are lucky to have many volunteers who assist with so many aspects of the railway and it is always a delight to highlight someone who has worked hard to become a fireman. Neil Bates hails from Stockport and was in the road transport industry. He has worked hard to gain his qualification and we are delighted to welcome him on to the regular roster of loco crews.

While on the subject of volunteers, our annual Volunteers’ Day on Sunday 12th September, hosted by Russell Prince, is now fully booked and we are looking forward to a fine day introducing this group of potential volunteers to the various aspects of BLR operation. 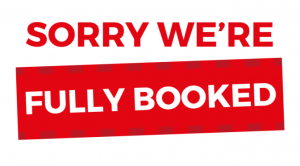 And finally……… a Dragon appeared at Llanuwchllyn. Not the consequence of someone zealously sampling the local landlord’s fine ales but an example of astute observation and rapid action. Nick Talbot, perennial volunteer and editor of the BLR Society quarterly magazine, Llanuwchllyn Express, noticed a dragon in a hotel in Criccieth. On being told that the dragon was no longer needed, Nick immediately decided to give the animal a new home at Llanuwchllyn and the dragon was duly mounted next to the picnic area at the end of the platform where his presence is eminently relevant as the Railway, the Trust and of course the Welsh flag have a dragon in their respective logos. As the result of a competition, he has been christened Dai, an eminently appropriate name (far more so than some of the ribald ideas) and has proved an enormous talking point over the Bank Holiday weekend where many visitors posed for selfies and the like. 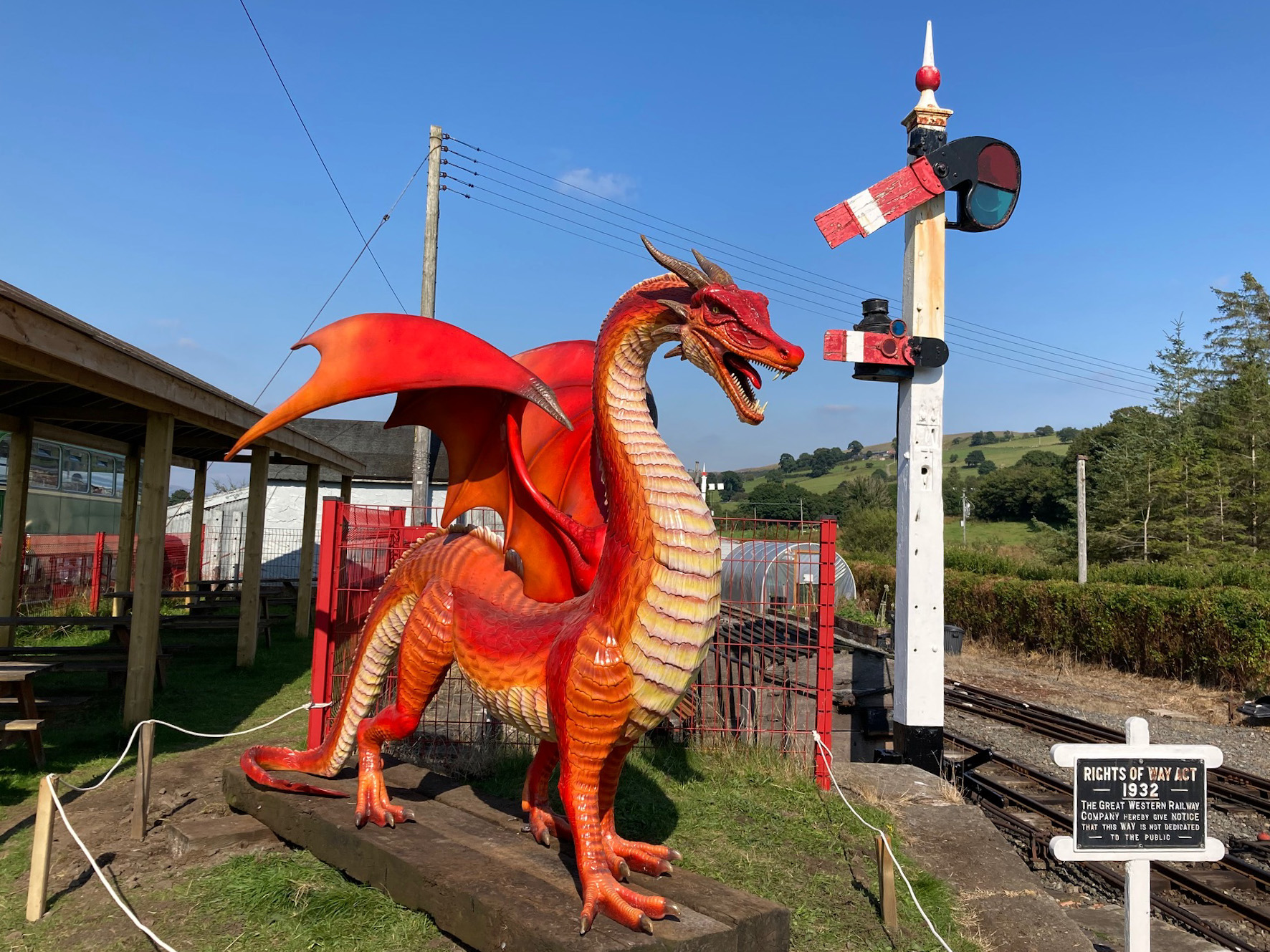 Thanks to Nick’s forethought and prompt actions, we have a surprise hit on our hands although the Chief Engineer’s dog, Max, merely eyed up the dragon as a possible ‘staging’ post while Marian the railway cat was elsewhere and unavailable for comment.