The BLR has done it again. During May, Tripadvisor awarded us another Certificate of Excellence thus elevating us to their Hall of Fame for the second time in a row. Their statement read as follows;

The BLR has done it again, again. Passenger numbers for the whole of May were up 17% on last year, which goes hand in hand with those of the year to date being 16% up. Indeed, two records were broken over the late May bank holiday weekend, for the most passengers carried on a single day on the Sunday (a whole three more than the equivalent Sunday two years ago, which previously held the record), and for the railway’s busiest May bank holiday weekend ever.

The BLR was also mentioned in an interesting article in the Guardian which featured a delightful tour of transport-related themes around the area, from standard gauge from Machynlleth via the Talyllyn to the Fairbourne Railway, ferry across to Barmouth then T3 bus to Llanuwchllyn for a ride on the BLR after which one can travel on to the Llangollen Railway by the same bus. There are numerous permutations possible but it highlights what North Wales does so well in that the attractions do not compete but complement each other. Read the article by clicking here.

The Bank Holiday Gala was busy to say the least, with the small amount of ‘liquid sunshine’ doing nothing to dampen the fun, particularly on Monday. The station café did a roaring trade and Elin Mair, Sally, Caz and all the girls deserve medals for the way they smilingly served everyone so rapidly. 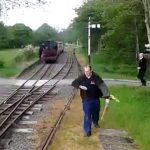 The loco crews only had open locos to operate (more later) but minor weather issues were dismissed completely, judging by their smiles. Stalwart husband and wife team, Norman and Barbara Cooper, were busy on the Monday, as were Dave and Ailith Rutt, and Russell Prince was sporting one of his ‘exciting’ waistcoats, a delightful tradition. A two-train service ran all weekend, passing at Llangower Halt halfway along the line where Tim Williams was not only on points duty at the passing loop part of the time but had installed a temporary webcam link from that location. It will be reinstalled for the other Galas this year.

An extra service was laid on for Sunday evening, a traditional feature, where guests were taken to Bala which then halted at Llangower on the return leg where a local butcher served up a Bar-B-Q in the adjacent car park. Being local produce, the quality was exceptional and the variety catered for all tastes and persuasions. Similar trips will operate for the general public during August – further details on our Special Events page.

The Festival of Transport next to Llanuwchllyn Station was very well attended with a large variety of classic, elderly and vintage examples on show, not forgetting the local crafts and produce available from suppliers in the area. An added bonus during the displays in the arena was the delicious aroma of TVO and other appetising brews wafting across to the platform.

The Model Railway Show in Bala School sports halls was a resounding success and huge thanks go to all who helped make it so, particularly Richard Wallace, with the result that visitor numbers were up 16% on last year. There was much favourable comment on the sheer quality of the stands with exhibitors coming from far and wide, including our usual visitors from Ireland who are slowly working their way through all the stations near Llanuwchllyn in N gauge.

Of particular note was the 29 feet long model of the Forth Railway Bridge built in T-scale. If you have not come across this new scale, an HS125 power car (with lights!) is about one inch long and runs on 3mm wide track, but any qualms about detail and quality should be dismissed immediately. The rolling stock is exquisite and several renowned modellers were seen to be getting excited. As for the diorama of the Forth Bridge, the photos cannot do it justice. It really has to be seen to be believed. 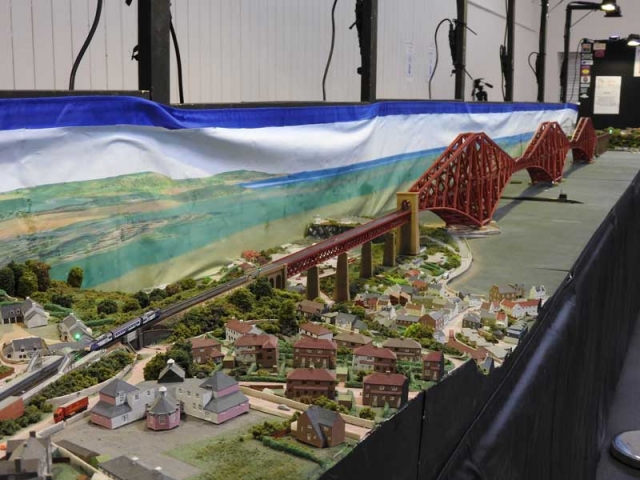 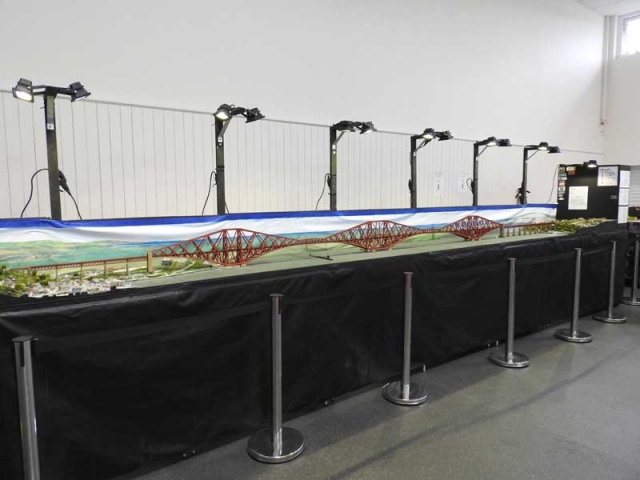 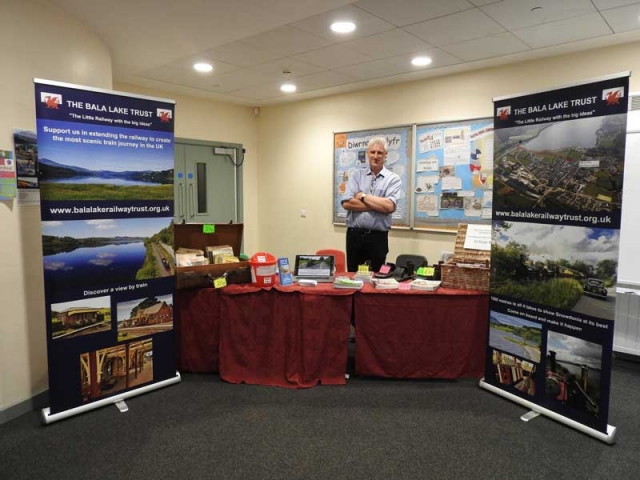 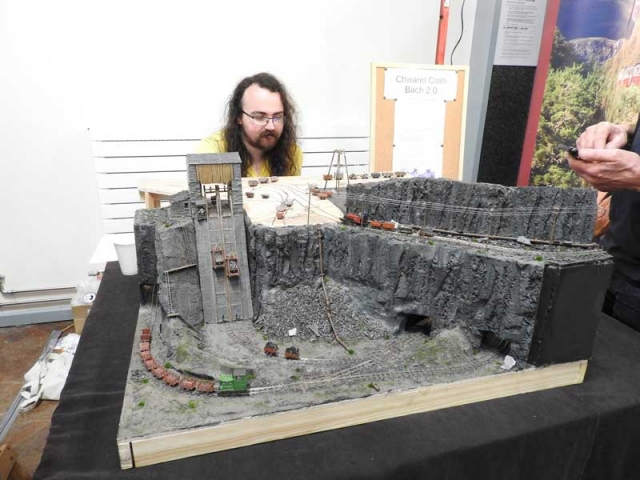 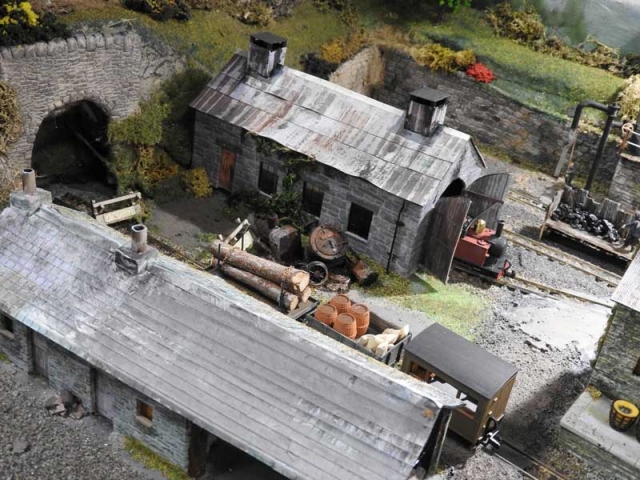 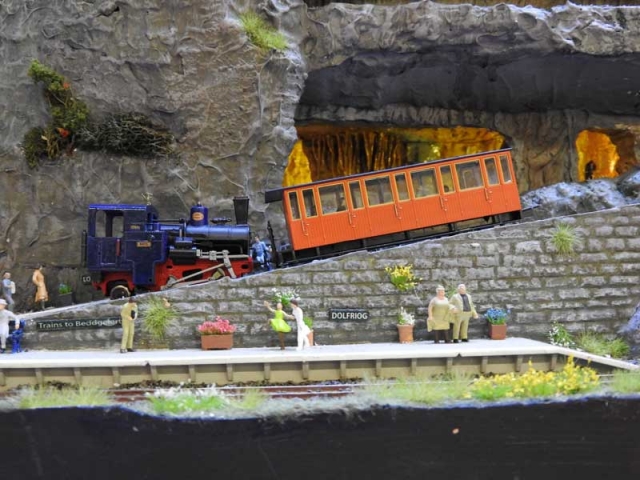 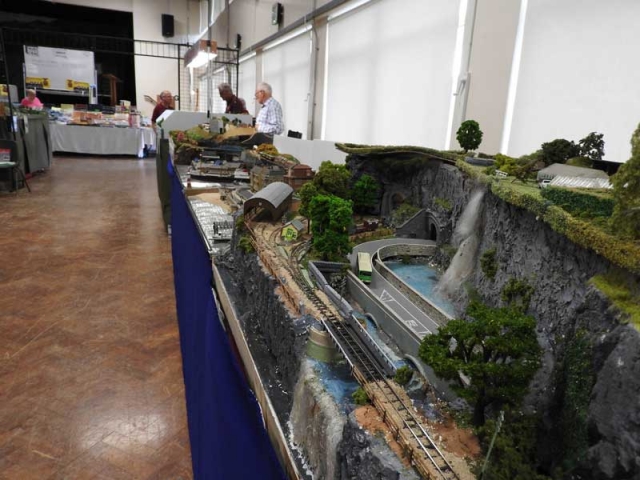 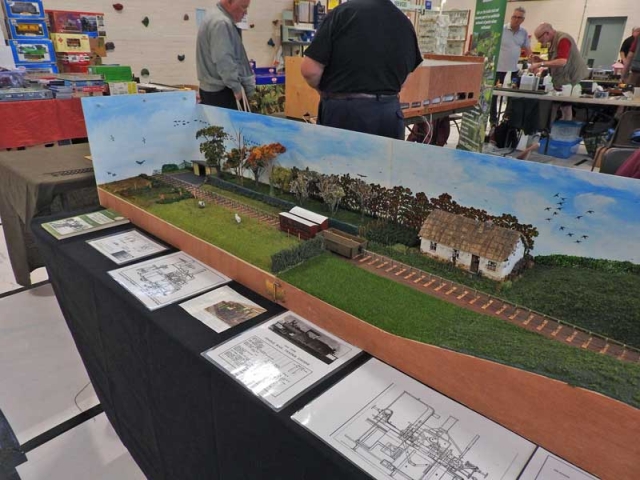 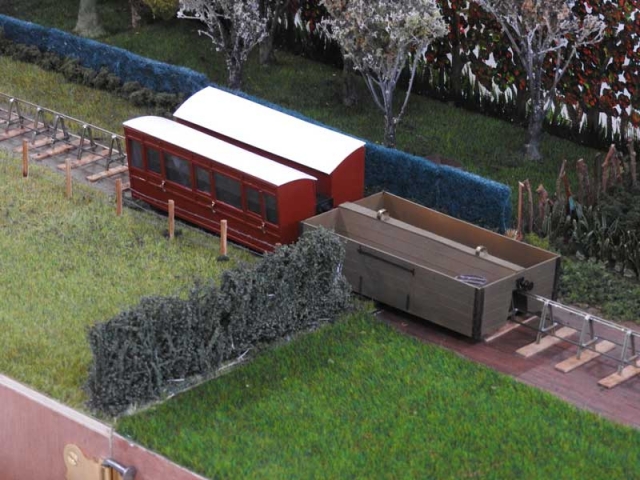 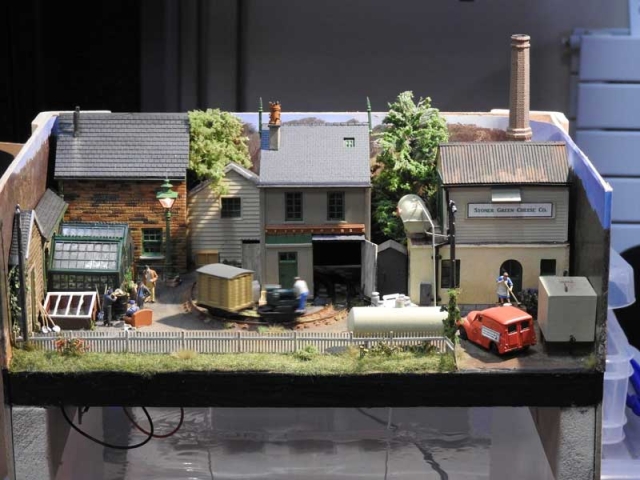 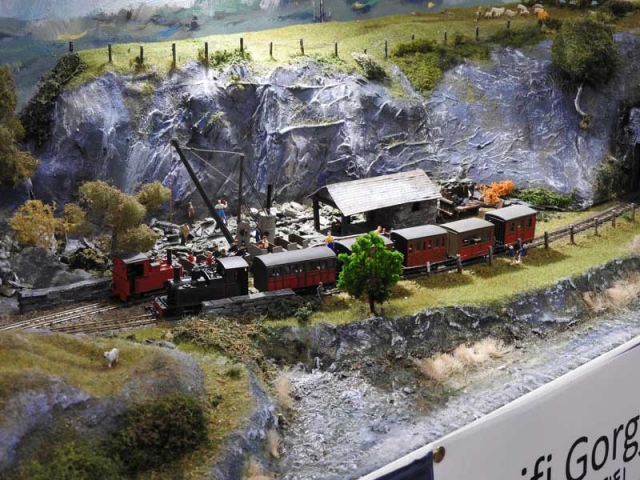 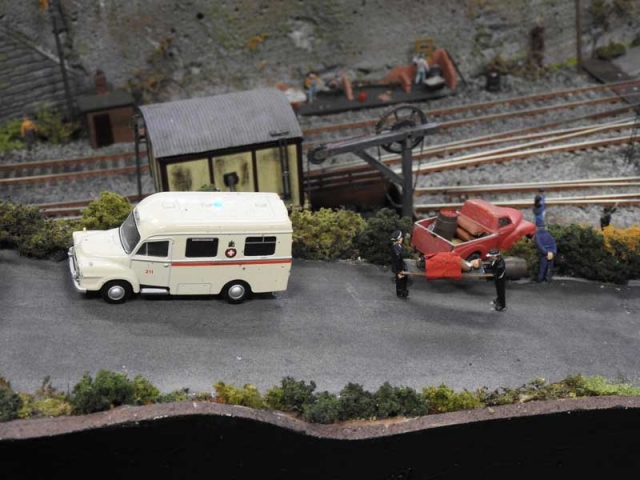 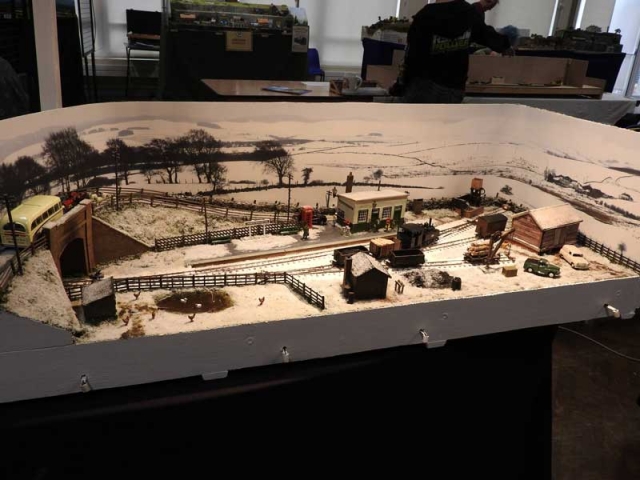 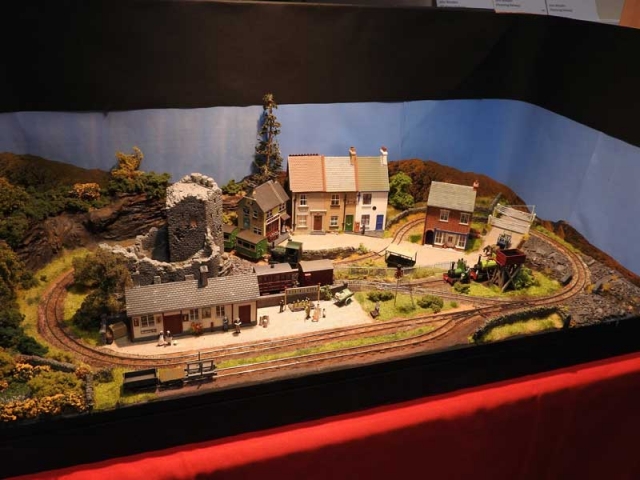 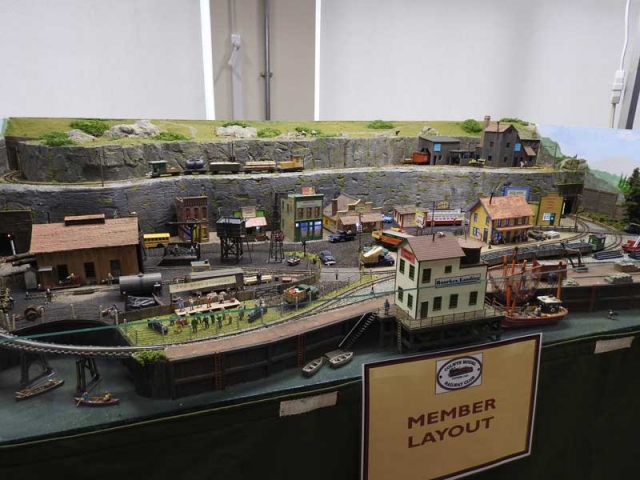 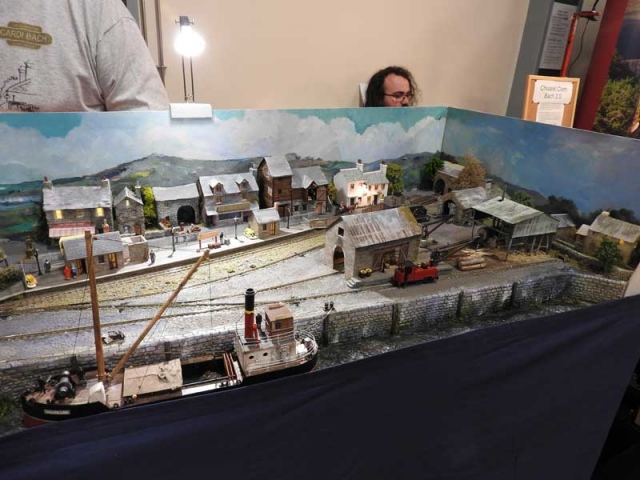 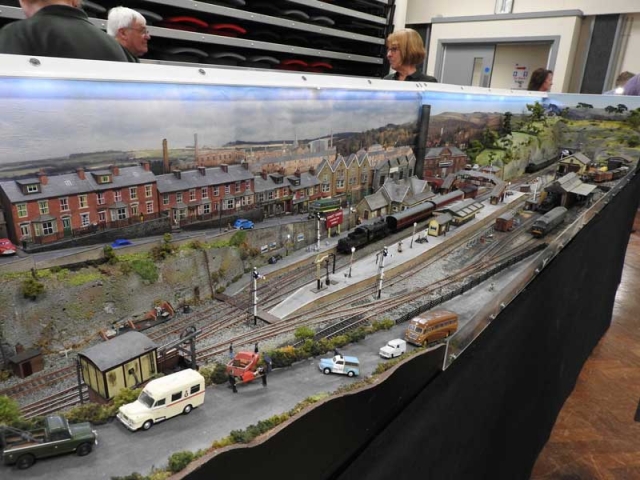 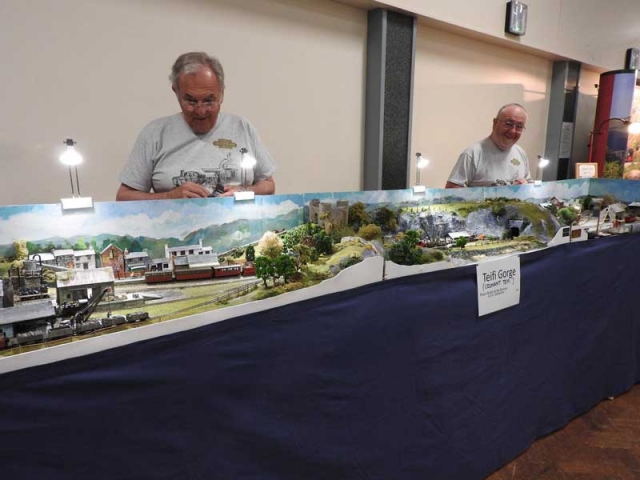 One aspect of the model railway show is that the BLR always provides free transfer service from the show to Bala Station in a pair of wonderful classic double-deck busses, a 1964 Routemaster and a Bristol Lodekka of similar vintage. A considerable number made use of this service, particularly as this year, the BLR decided to use the gaps in the schedule to take passengers up the road to Llyn Celyn reservoir, affording not only excellent views across the valley but also a chance to spot traces of the old railway track-bed down the valley. Several passengers of advancing years were keen to relive their youth, such was the rush to get to the upper deck front seats!

One heart-warming aspect of our annual show is the loyalty of exhibitors who come from great distances but just love the atmosphere. The BLR always makes a contribution to their expenses but it was notable this year that quite a number donated their expenses straight back to the Trust, such is the feeling about the line getting back to down-town Bala. The BLR is hugely grateful for their loyalty and enthusiasm.

On the subject of the proposed station, Barbara Cooper managed to raise, almost entirely on her own, the cost of having a new running-in board made for Bala Station which, when erected on the new station site, will be the first definitive structure of the extension.

The enthusiastically staffed Trust’s tombola managed to raise over £900 for the Red Dragon Project in sales and donations, a remarkable effort and the result of tangible competition between the two main protagonists.

Over the whole weekend, there were numerous volunteers helping everywhere, doing anything that needed doing as well as manning stands and providing relief, even collecting litter along the track. (When will people learn?) Indeed, volunteer Rod Fairley was spotted helping on no less than four stands at the Model Railway Show. On behalf of the management, staff and everyone, herewith a huge vote of thanks to all who journeyed from all over the country to help make the Gala weekend exactly what it was, an enormous success.

Our locomotives have been busy and as we mentioned earlier, Alice, Winifred and George B have been keeping visitors smiling. Holy War is stripped to her frames with a lot of minor improvements being done before reassembly, and we will report more fully in due course. Maid Marian was suffering from a minor ailment (a fusible plug issue) which has now been dealt with.

On the diesel front, for they deserve a mention too, the redoubtable Bob Davies, (aka Trigger), soldiers reliably on in daily use, our smaller R&H Lady Madcap was in use over the weekend doing some rearranging of rolling stock in the sheds and the Heritage Centre, the sort of activity at which she excels, and Chilmark, although used quite regularly, is still awaiting some ingenuity regarding her dynamo which is 6 volt whereas all her ancillaries are 12 volt, thus she cannot currently charge her battery. Having, as you may recall, a dynamo casting which is an integral part of the block, made substitution impossible but Chief Engineer Rob Houghton decided to investigate a voltage converter. Needless to say, the fertile minds of Rob, former General Manager Roger Hine and volunteer Luke are all thinking along similar lines and a solution is imminent, to the delight of the railway and others. 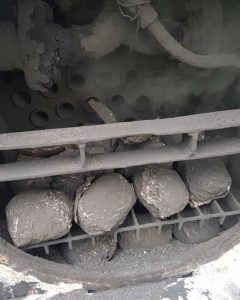 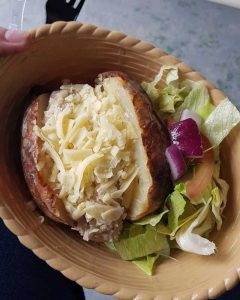 Jackets, No Ties is the title of a uniquely BLR special service where baked potatoes are wrapped in two or three layers of foil, placed in the locomotive smokebox and after a run down the line, are served with all the extras, the taste being unique and totally delicious.

This latest escapade took place on the 30th and was well supported, so much so that double layers of potatoes had to be placed in the smokebox. At the end of the ‘cooking’ journey, guests were invited to witness the removal of supper prior to unwrapping and tucking in.

Diary dates – June 15th & 16th Steam Gala. As we mentioned, this year we will have visiting from the Apedale Valley Railway the Kerr Stuart ‘Joffre’ class loco which will join our own fleet of Hunslets. Our Special Events Steam Gala page has further details, an event not to be missed. Day Rover tickets are now available to purchase online.

And finally……. the BLR likes to provide excellent service but sometimes we go above and beyond.

One noted donor to the Trust and exhibitor at the Festival of Transport with his beautifully restored Mini Clubman Estate suffered the unwanted attentions of one of the new speed bumps near the Festival arena which attacked the exhaust pipe, thereby increasing the decibels considerably. Rob Houghton, a noted Mini expert himself, came to the rescue, the car was carefully backed over the pit in the empty loco shed and the exhaust pipe was rapidly repaired, an example of BLR service at its best.

We conclude with a delightful encounter on Sunday evening. Norman and Barbara Cooper, who had been doing so much over the weekend, helping at the Model Railway Show plus driving/guard duty on the trains and generally being useful everywhere, were seen walking slowly but contentedly back to their accommodation. Someone passing was prompted to adapt a line from Thomas Gray’s Elegy Written in a Country Churchyard;

Norman’s response was slightly less poetic but had a more contemporary feel!