No more needs to be added here about the critical situation in which these islands of ours find themselves and everyone, barring the sadly inevitable idiot contingent, knows what is required of them, thus with courage, tenacity and common sense, we will win. The Bala Lake Railway, with the support of the government back-up schemes from which all heritage lines may benefit, will be able to survive and pay its staff and bills in the short term. But with the doors closed and no income coming in, we face a worrying and uncertain future through no-one’s fault and have consequently launched our Covid-19 appeal. We know many of you will be worried about your own and your family’s future too, and it goes without saying that that is where your first priorities should lie. But if you are in the fortunate position to be able to make a donation, please consider helping our appeal so that we can continue our work in preserving the railway and its trains so that we will still be here to entertain you, your children and grandchildren for generations to come. Click here to go to our donations page.

We also include below our Covid-19 video appeal, a moving pot-pourri of atmospheric glimpses of the railway at its very best.

It is the uncertainty of the timing of this pandemic that is of concern, and in the absence of anything tangible, we must also think positive waves for the UK’s NHS and Care Staff (CW) .

General Manager David Jones put out two lengthy statements, addressed mainly to volunteers, asking everyone to keep away until further notice and receipt of the government ‘green light’, so we will just have to wait. The railway is currently closed until at least early May and all events during the same period have obviously been postponed, but the only date meriting the heading of ‘a definite maybe’ is the Volunteers Recruitment Day, which has now been rescheduled for Sunday, 13th September .

We are carefully monitoring developments and whilst the Model Railway Show and the much-heralded Bala Re-Railed spectacular at the new Bala Station site in June are currently still scheduled, there is a high probability that we may have to cancel or postpone both events. They and the resumption of passenger services will only happen if and when ‘social-distancing’ restrictions are lifted, and until the BLR can operate again as normal, we must summon great reserves of patience. These necessary restrictions are driving everyone bananas but stick with it and watch the BLR website for the latest information. One thing is certain; with our determination and your support, WE WILL WIN.

But before the Covid-19 pandemic became serious, the March Working Weekend was turned into a five day session, in part to make up for having to divert attention during the February working weekend to deal with the worst effects of the two storms, Ciara and Dennis, about which we commented last month. A vast amount of work and improvements was carried out, thanks to excellent organisation and commitment, and a fantastic response from our committed volunteers.

The whole operation was planned around volunteer numbers. The tree-cutting from the current Bala station to the road bridge, which began last October, was continued and finished, with trees cut into useful logs and the smaller branches disappearing noisily into the chipping machine. The fence on the Bala side of the road bridge was replaced, as was the section next to the B-road known as the ‘Sailing Club layby’ which has suffered over the years. In the perpetual battle to stop people wandering down the track, new ‘NO TRESSPASSING’ signs have been installed at this location as well as other prominent points along the line. For whatever reason, certain elements of the public (the idiot factor again) completely disregard the signs and think the track-bed is a right-of-way, and in some instances have become distinctly abusive when politely informed that it is not. Perhaps the thought of gaining a criminal record (for trespass on the railway is indeed a criminal not civil matter) might make them think again. We can only try! 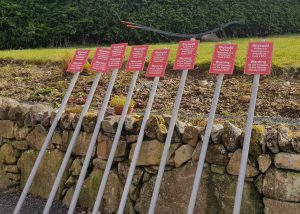 The track section from the Sailing Club to Boathouse Bridge has benefited from serious tree-pruning although we had to leave some trees untouched along the shoreline as these do not belong to the railway. But this sensitive thinning has greatly improved the views on this section where the line runs on an embankment close to the lake.

Water running off the hills and trying to get to the lake is the cause of many of our problems. As well as keeping the many culverts and ditches along the line clear, the level crossing providing farm access in the middle of Dolfawr Bank, a few hundred yards east of Llanuwchllyn, has been a headache for a while as the steep lane to the farm provides a natural water course across the rails, so a concerted programme of improvements was carried out. The continual build-up of debris washed down the lane had created a mini dam so a mini digger and pivot-steer dumper were hired for the jobs. Three lengths of rail were lifted, the ballast was cleaned and fresh ballast added as well as some new sleepers being fitted. A new trench was dug from the uphill side of the lane to the ditch where a new drainage pipe was installed. A second shallower ditch was also dug and a drainage channel installed in order to catch water from the lane, after which the remaining ditch running downhill alongside the track-bed was opened up for around 100 yards. To benefit the farmer, some road chippings were used to improve the lane. 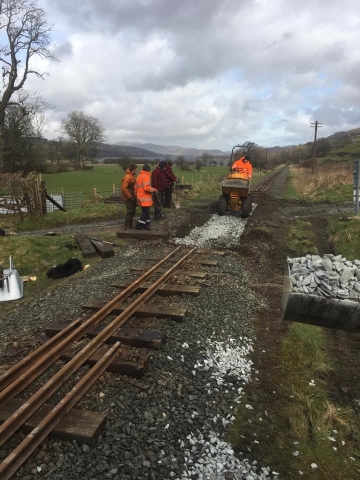 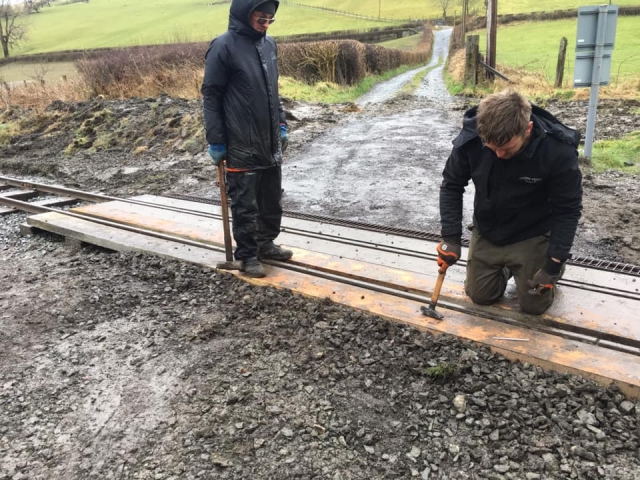 Using the new BLR track tamping machine to great effect again, seven lengths of track on the main Llanuwchllyn station ‘road’ were lifted so that the sleepers could be replaced. The ingenious BLR ballast-plough could not be used because of the proximity of the platform, so the digger leapt into action and lifted the sleepers with the old ballast then being dropped into our skip wagons positioned on the passing loop. Using a wooden template for accurate positioning, 51 new sleepers and ballast were carefully laid, the track was re-installed and spiked down, after which the new tamper got busy. It is worth a mention that all this work in the station was carried out in one day, in part thanks to the new tamper, and only some finishing touches were need the following morning, all in all a very successful operation.

While many photographs were taken during the busy day, we include volunteer Tim Williams’ time-lapse film which encapsulates it all from start to finish, a brilliant piece of editing as well as being a valuable historical record.

In spite of the enforced shut-down, the BLR Trust is still beavering away on the mammoth planning application for the extension route into Bala. As we have said before, this has to be absolutely right first time and the exercise could not be in better hands, home distractions permitting!

The Penrhyn Coach has not been mentioned recently but activity has been happening behind the scenes on this remarkable project. Volunteer Mike Hayward is looking after the task of the wheels and bearings plus the draw-gear, the long metal strap that links the couplings and takes all the force and tension longitudinally. After this is completed later in the year, painting will restart, together with intricate lining, after which the roof will be finished.

And finally……. we close with David Jones’ very poignant photo of traffic cones blocking the approach to Llancwchllyn Station. We only hope that providence and common sense prevail and we can soon put the cones back where they belong – in storage. 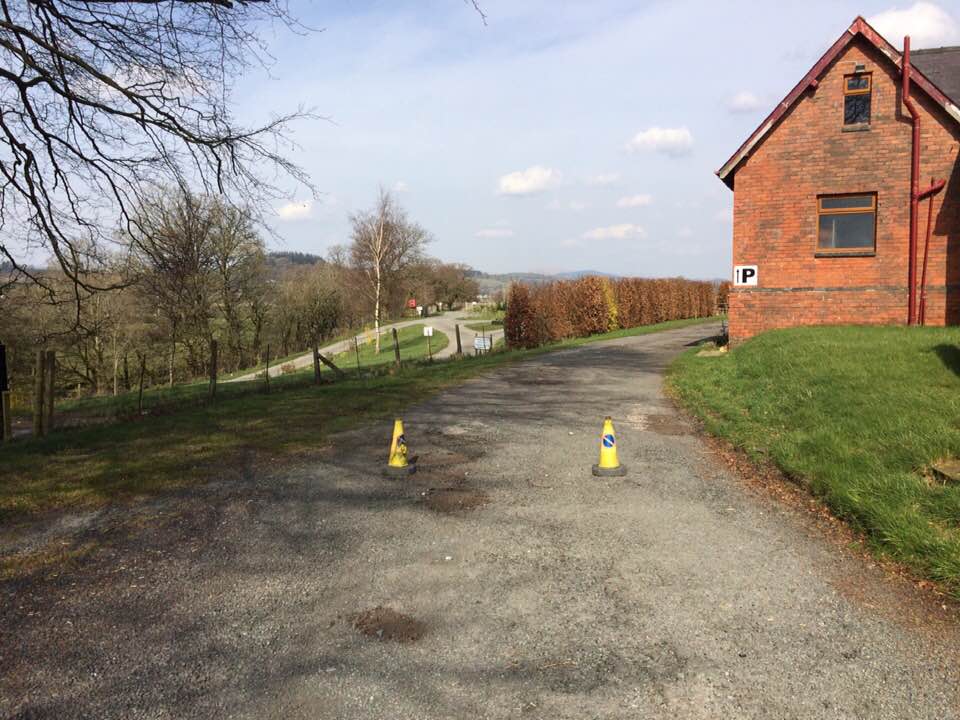 Secondly, and on a lighter note, a quote came to light, originally aimed at a 16mm live steam model, which highlights most aptly the heart and soul of our own little locos, indeed all narrow gauge engines, treating them as works of art, not just machines, something which will strike a chord with so many.

“Don’t tell me it’s not art. My little loco is an Elgar overture in mechanical form; a thing of spirit and beauty”.