Saying that it has been a busy month in Llanuwchllyn for several reasons is something of an understatement, not least the number of passengers who have visited the railway and who booked their tickets online. One of the benefits of our new system is that statistics are available so much more quickly and accurately. In 2019, the numbers for September were the second best on record. In 2020, the final numbers for the month were nigh on the same as 2019, and this with Covid-19 restrictions thrown into the equation, this being nothing short of a truly remarkable achievement. In fact, we would have just exceeded the 2019 figure had the last day of the month not been typically autumnal and generally foul. Even so passengers still braved the unfortunate weather to ride along the lake which, even in less than glamourous conditions, has a distinct appeal as the train happily trundles on its way.

There was concern that the frequently changing restrictions would put the proverbial spanner in the works at the end of our operating season, but thankfully services are running to schedule with alterations in the carriage stock as the open variants have been taken out of service until next year. The only headache for the management is that lock-downs in other parts of the country have meant that some of our volunteers, who journey from far afield, are no longer allowed to stray far from home, thus putting a certain strain on the rostering, however, with the October schedule being traditionally reduced (apart from half term at the end of the month), all the driving and firing slots can be allocated. Likewise, others whose home areas are not subject to new restrictions have been arriving to help out, thus preserving the efficient atmosphere of the line.

During the month, Dan Laidlaw photographed the latest carriages to receive some refurbishment and you will agree that the striking colour scheme is very smart indeed.

Work has resumed on the restoration of the signal-box. It was discovered that some rotten wood around the windows was worse than anticipated, hence a new window had to be ordered. This has now arrived and we only await the arrival of some new corner posts for work to recommence. The steep steps up to the ‘box are to receive attention as well and their angle of ascent is to be reduced which will make life easier for visitors who delight in seeing how the art of signalling is practiced. Our chief signalman will be delighted too.

As a corollary to this paragraph, it is interesting what one notices when accessing the station webcam, and this subject came to light because a supporter was watching the live webcam and noticed a person with a tape measure taking some careful measurements at the end of the month. You never know what or who might be seen!

The BLR Volunteer Recruitment Day took place on Sunday 13th September and seven prospective names arrived to see what makes the BLR ‘tick’. As our photo shows, they were greeted by General Manager David Jones in the Heritage Centre, after which they were shown as many aspects of the railway as possible by Russell Prince, Rob Houghton, Dan Laidlaw, Tim Williams, Dave Rutt and Bernard Allman. One never expects a stampede at the end of the day but one person was so impressed by what he saw that he returned on the following Tuesday. We sincerely hope others will follow his example. 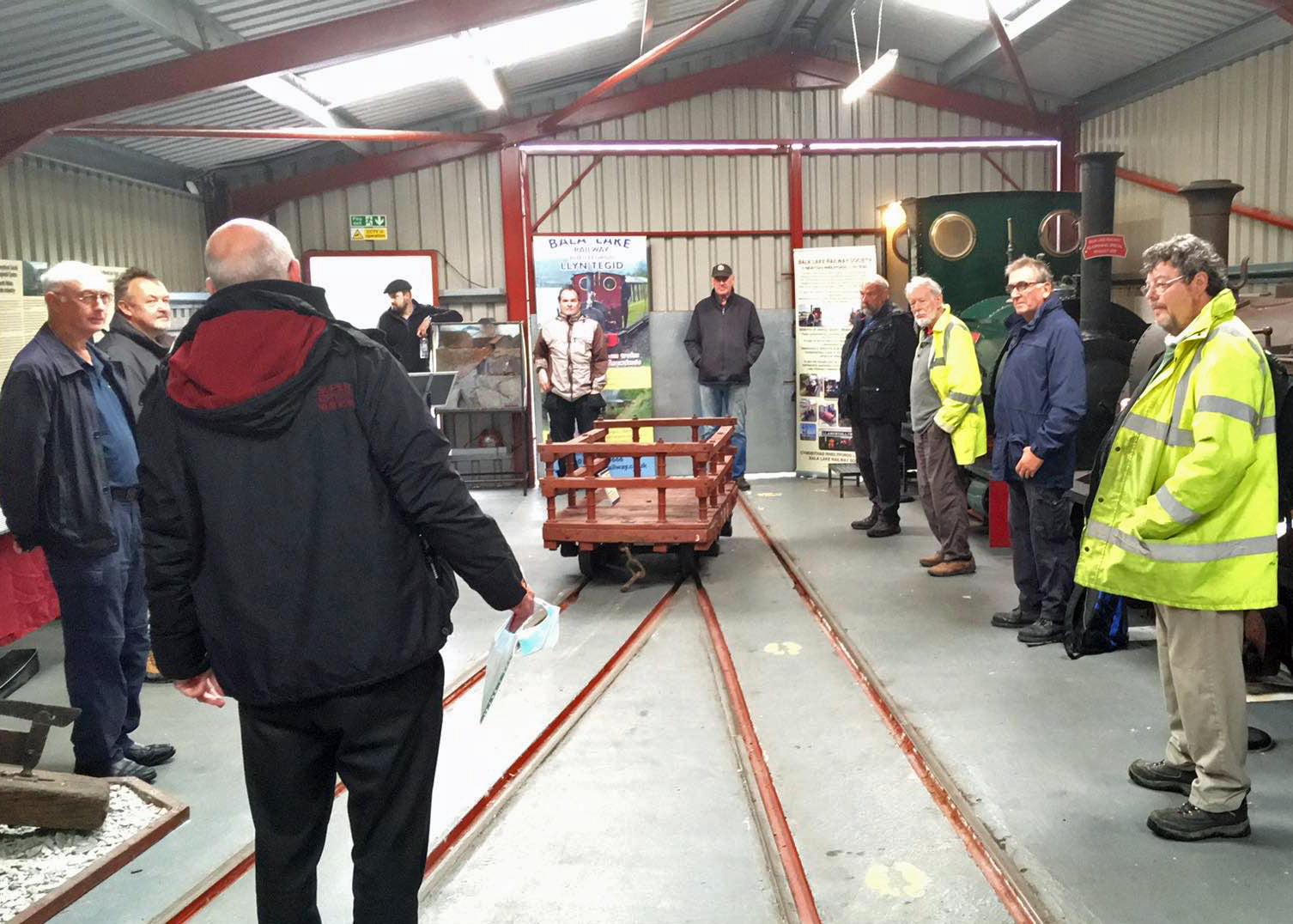 The Penrhyn Coach has been out of the news for a while as some of the necessary components needed have taken longer than hoped to appear, and all this time it has been sitting on a temporary wagon in the dry carriage shed. There is progress and during the month, David Hale, who constructed this exquisite coach virtually single-handedly, visited Llanuwchllyn. He reports:

The carriage was moved into the loco shed on the flat wagon prior to my arrival on the 15th. I and Mike Hayward, a recent new volunteer from Banbury, jacked up the carriage during the afternoon and, having positioned half sleepers under strong points beneath the carriage, rolled the wagon away to allow unimpeded access to the steel chassis on which the carriage was built. Wednesday and Thursday were spent bolting the axle-guards back on to the chassis, (they had been removed prior to the carriage being transported from Somerset), installing the axle-boxes and making adjustments to enable the springs to be fitted.

Covid-19 regulations permitting, we hope to return on the 20th October for three days to continue the job. Spring support plates, which we prepared, must first be welded to the axle-boxes and the bearings can be fitted into them, after which the final fix of springs can be completed. Again, the axle-boxes will need to be dropped out to allow the wheelsets to be fitted and positioned, after which the carriage can be lowered on to them. If all goes to plan, the carriage can then be moved for the first time on its own wheels.

The BLR’s new arrival , the Avonside loco, about which we reported last month, has made good progress from the other side of the globe and the latest information is that she is due to arrive on UK shores earlier than expected, hopefully around the middle of October. After the usual paperwork has been completed, she will be transported to Llanuwchllyn in her container where she will stay until suitable arrangements are formulated. To this end, a small piece of track in the yard has been altered so that the container can be placed and in due course, the loco will be rolled out straight on to track. The container is to be her home for a while as space in the loco shed is currently at a premium.

We cannot wait to welcome her (and her home) to the BLR. In the meantime, we hope that her passage through British bureaucracy is less fraught than that of Winifred, which was left, at the end of a trouble-free 5,000 mile journey from the USA, on the docks in Southampton and it took a decidedly fruity phone call to the shippers to wake them up and expedite her release.

Incidentally, Julian Birley’s delightful book on the whole story of Winifred, her purchase, shipment, restoration and return to steam, under the title of Winifred Comes Home, is still available in limited numbers from the railway and is priced at £5.99, all proceeds from which go to the BLR Trust Extension Project. Do grab a copy as you will find it a beautifully written and heart-warming story, and a perfect way of passing an autumn evening.

And finally….. as we are frequently told, the BLR is a friendly place. Reviews routinely comment as such, with staff, volunteers and others getting regular comments about the pleasant atmosphere. We love dogs too and they are always welcomed, as our photos show. As someone in-the-know commented recently; “You were carrying canine royalty. Mouse is a Crufts Flyball Champion”.

We have amidst our teams at the BLR some very talented photographers but every now and then, one sticks in the mind as different, hence we show John Huxley’s shot looking more or less south, which captures the atmosphere of the loco shed with assorted equipment and rolling stock. But it is the Aran mountain in the background which makes it so interesting. Bala Lake is spectacular, whatever the weather, but this photo faces the other way and is further proof of the wonderful scenery in which we work. 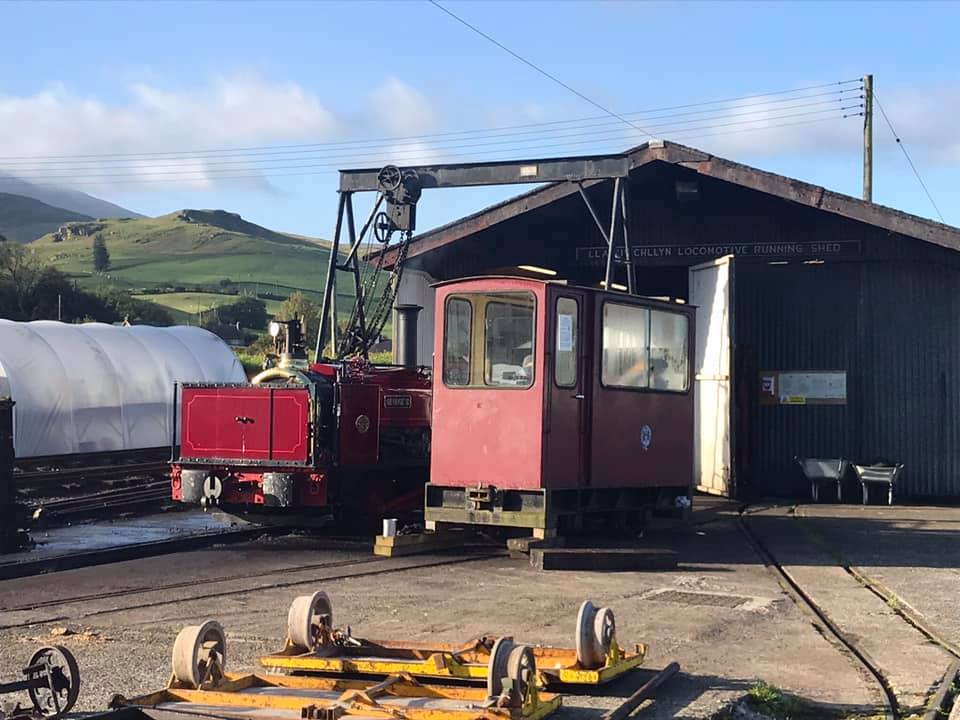