“It’s a pity there’s nothing happening on your railway”. This unimaginative comment from an acquaintance prompted the response that one should always keep in mind the old military axiom; ‘assumption is the mother of all foul-ups’. In point of fact, there is a lot happening on the BLR in spite of the whole country, particularly Wales, being necessarily locked down and as we shall see, much progress has been made in many directions.

With virtually no possibility of enjoying volunteer participation, hence no Wednesday Gang (much to their acute frustration) and because so many of our teams come from a distance away, the three salaried staff, the General Manager and our two demon engineers, Rob Houghton and Dan Laidlaw, have been busy and managed to keep well apart from each other, the General Manager enjoying the luxury of mostly working from home and the engineering team beavering away on different projects. Luckily, they live in the immediate vicinity.

However, in the light of the necessary existing lockdown measures, it can only be hoped that the railway might re-open for passenger services, as planned in our newly-published timetable, at the end of March as well as for Easter. Beyond that, we can in no way make assurances as this pandemic must be quashed and as further guidelines are announced, we can plan and advise accordingly.

Holy War is emerging slowly on the other side of her 10 year strip-down and rebuild. Chief Engineer Rob Houghton got her back on to her wheels during the month and her frames are looking resplendent in gleaming paint. The rolling chassis is now complete, including the internal motion, and we are awaiting the return of the reconditioned boiler from the Severn Valley Railway which will mean that she will then start to look like a Hunslet again. 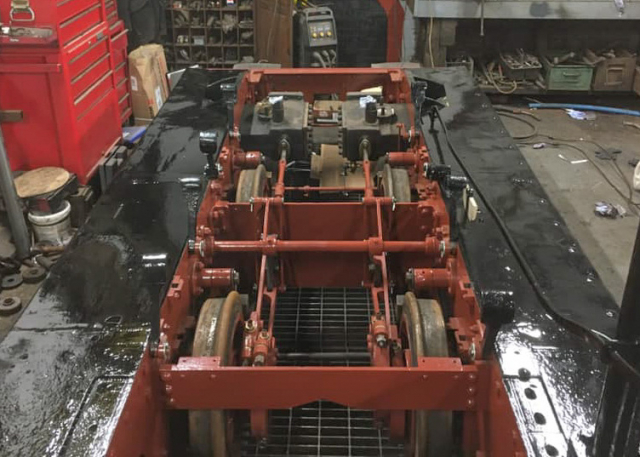 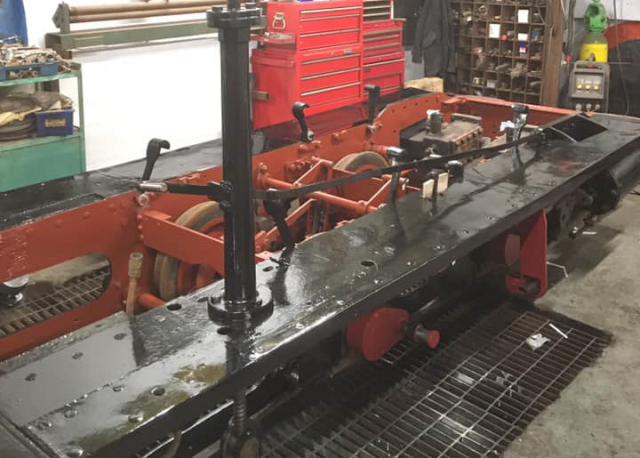 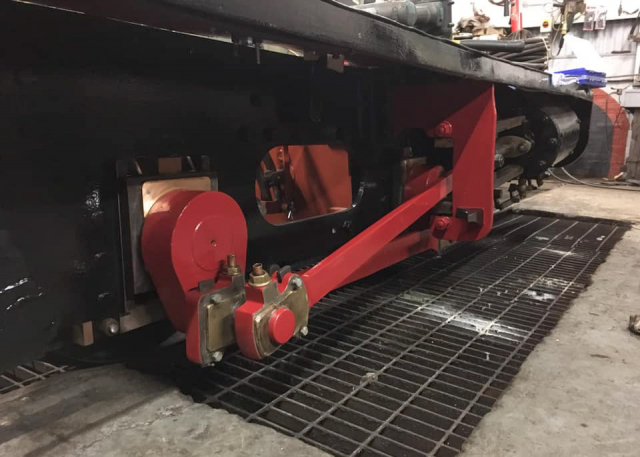 During the refurbishment at the SVR, the steam inspector noticed that an area of the boiler had become ‘a bit thin’ (sic) for his liking and a new barrel was constructed. The new angle ring at the front (where the boiler joins the smokebox at the front of the loco) was found to have had the holes drilled incorrectly by a sub-contractor thus a further replacement had to be constructed. The refettled boiler is due back at Llanuwchllyn very soon.

The lockdown will never stop Bala Lake Railway Trust in its quest to connect the existing line with down-town Bala and in the last few weeks, Trust Chairman Julian Birley has been feverishly fund-raising to match the contribution from Natural Resources Wales for improvements to the flood defences at the eastern of the lake along which the new line will run. The match-funding is almost in place but the Trust still needs to raise another £50,000 by the end of February so that another ‘box can be ticked’. In the meantime, Julian has been busy with frequent Zoom calls with our consulting engineers as well as discussions with the architect for the new station in Bala.

This landmark amount of £50,000 is absolutely crucial to the project and could almost be described as a critical ‘make or break’ point, so please, please try to find a way of making a contribution to the Trust, and to this end, we list the Trust’s website which makes the task so easy. Whatever you can spare, it will be greatly appreciated and help to get us reach the target. Click here to access the Trust website for further details and to donate.

A recent delivery to the railway was the first batch of brand new wheelsets which will be fitted to our refurbished carriages. General Manager David Jones, a qualified engineer in his own right, takes up the story.

This is part of a major upgrading programme as several of the carriages will benefit from new bogies incorporating these new wheels, and this brings us to the tale of ‘musical bogies’ (think musical chairs with added wheels). At the end of last winter, the wheels on our trusty Catoflat, our combined track maintenance equipment and staff vehicle, reached the end of their serviceable life.

As the short operating season progressed, the wheels of our semi-open carriage no.2 were also getting close to wear limits, so as the weather got cooler, the bogies were swapped with its partner, open carriage no.1 in order to keep no.2 in service. The plan to source new wheels for the Catoflat had fallen foul of the belt-tightening enforced by the uncertainty of the pandemic, so at the end of the operating season, the bogies on no.2 were put under the Catoflat so that it could continue its crucial winter duties. Still with us? In simple terms, one pair of bogies has been under no.1, no.2 and the Catoflat in the last six months.

The bogies and wheelsets on these three vehicles are all slightly different, so with some financial stability thanks to the Welsh Government’s Culture Recovery Fund, the decision was made to build six new bogies to the same standard design as already fitted to our main carriage fleet, meaning that all our carriages will be on one common design of bogie, with standard wheelsets manufactured by the company of Ian Howitt in Yorkshire, a company the BLR has used a lot in the past. These will be fitted to no.1, no.2 and the rebuilt no.4 when it re-enters service . 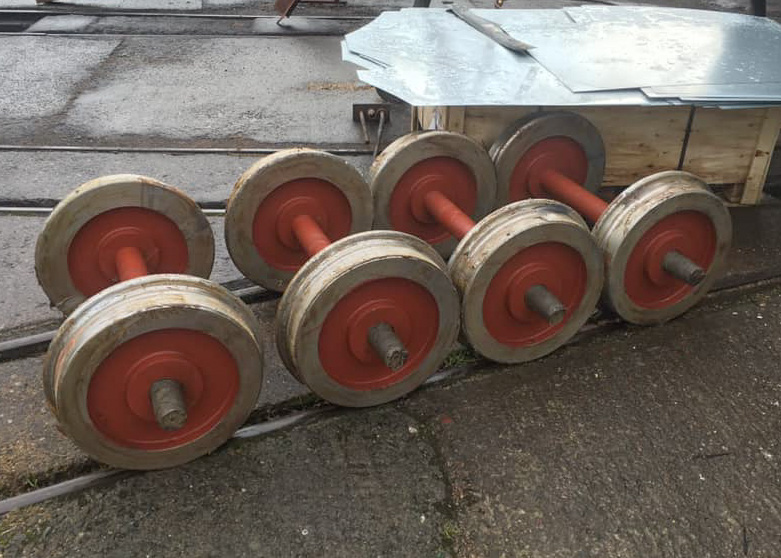 The aforementioned no.4 is to be rebuilt with a fully-glazed end so that passengers have a panoramic view along the track behind, as well as a close-up of the loco and the crew at work in the other direction. This feature will be a first for the BLR and we predict that seats for this area will prove very popular.

Carriage number 8 is nearly finished after its complete strip-down. The frames were refurbished and painted in black after coats of primer. The old panelling was removed leaving only the bare skeleton frame and new aluminium panels have been fitted. Typically, the BLR had made a template for the windows and apertures in-house at the start of the carriage refurbishment programme and this had been used to mark out the new windows, with extra small ones in the guard’s end. The final colour scheme will be exactly the same as the other carriages already repainted, that is Midland Red & Cream. 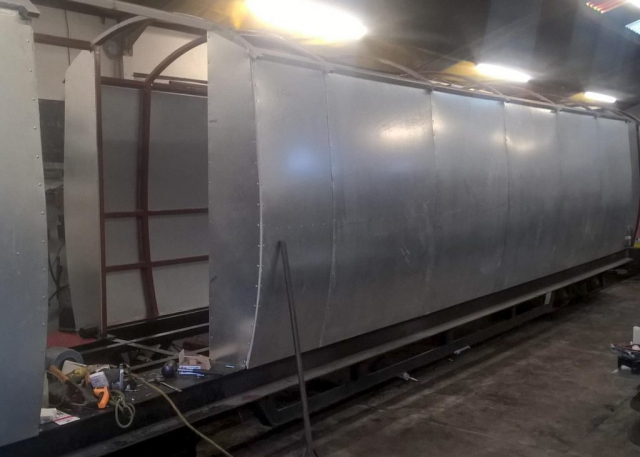 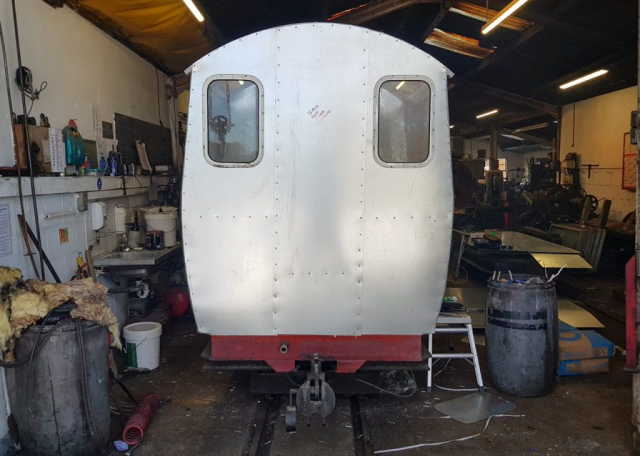 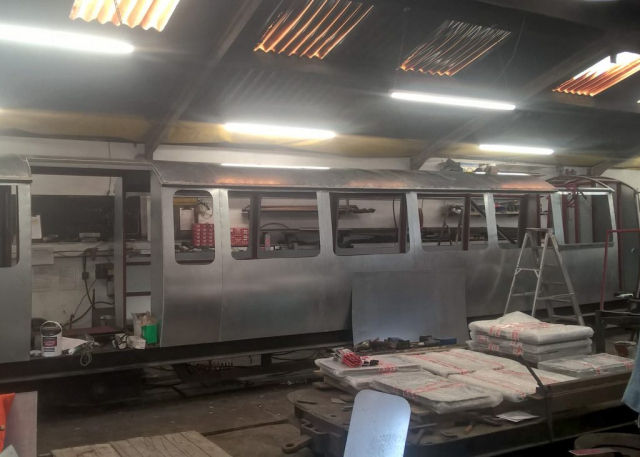 News of the track-bed after Storm Christoph had passed by is generally good, which is a relief to everyone, bearing in mind the amount of water that can cascade off the hills. The only slight headache was around what is known as Bryn Hynod, formerly a halt in years gone by, where rain comes off the fields above on to the adjacent lane, bringing with it lots of stones, dirt and detritus which blocks either the road gulley or the drain thus causing the water to flow across the road on to the railway track-bed. As the inefficient road drainage is in fact the Council’s problem, work will commence soon to remedy this situation and in a delightful quid pro quo, it has been agreed that a collapsed culvert under the line near the John Lewis Hotel further along the line towards Bala which causes the road to flood occasionally will be dealt with by the railway. This is yet another example of co-operation in the area and communication with the Council was harmonious to say the least.

While on the subject of track, we must raise yet again the thorny issue of TRESPASSING on the line. It must be remembered that, like all railways, the track-bed is private property and any infringement is subject to criminal, not civil, law and could merit a police record .

We have to mention this topic again as there have been instances where trespassers have verbally abused railway staff and in one case, a newly repaired fence had been deliberately cut to facilitate access. What these thoughtless people fail to realise is that out of season, works trains still run and if one is upwind, a train is surprisingly difficult to hear. On top of this, it gives a very poor example to others and, in particular, gives children totally the wrong message about railways thus they may be tempted to stray on to a main line. It is down to education, common sense and responsibility.

We reported last month that John Moorhouse’s Avonside loco, recently imported from Australia, was lubricated all over to make sure that everything that should move did, and it was then slowly moved in the yard so that the motion got a little exercise. We are delighted to report this month that the cab and boiler of the loco have been removed and the loco chassis, in its denuded state, has now been moved to John’s base in Derbyshire for him to work on at his leisure during lockdown. We will report at a later date on the progress of this exciting project.

And finally….. what of our railway cat, Marian, who seems to be enjoying quite a following since her mysterious arrival a few months ago? Rather in the vein of Mr. Tod in the Beatrix Potter tale, Marian now has a trio of ‘homes’ to visit dependent on her mood, one in the loco shed constructed by the engineering team, Rob’s house in the village when it gets seriously cold and now one of the volunteer caravans has been fitted with a cat-flap, should she be pleased to decide on a change of sleeping quarters. She seems to be growing by the hour, such is her appetite and this may well necessitate building her own private entrance to the loco shed as the gap under the main doors is getting a bit tight! 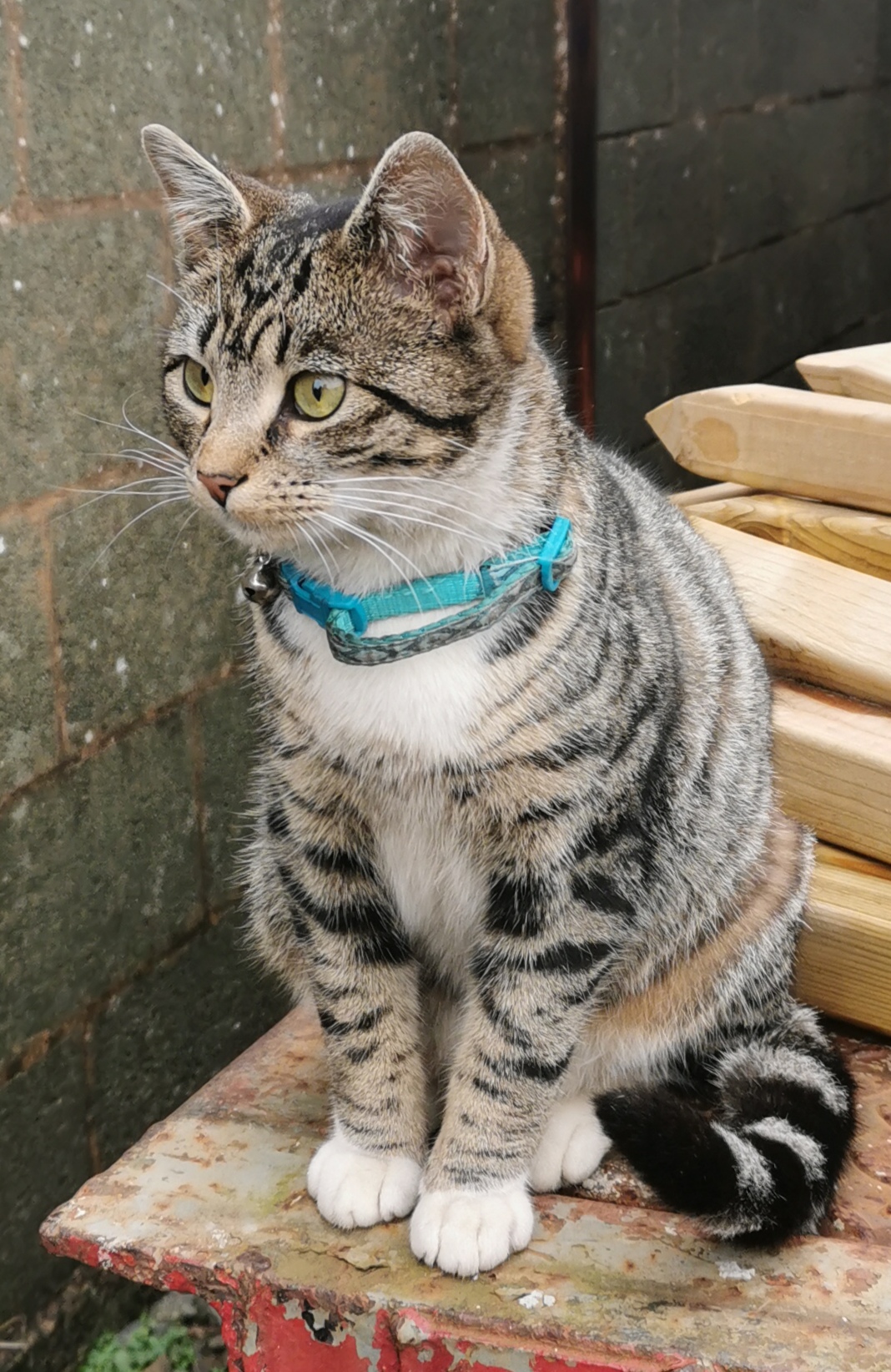 At least someone is not feeling the constraints of the virus.