Spring is upon us at last, the season which raises the spirits with lengthening daylight and warmth after a winter of restrictions and frustrations. The great satirical song-writer, Tom Lehrer, wrote joyfully (sic) of its positivity, as well as detailing some questionable practices in which one might choose to indulge involving some of our feathered friends. Google his name for further information!

As these pages were ‘going to press’, we were totally delighted to announce that, following pronouncements from Cardiff on the 1st April, the BLR will re-open again on Saturday, 1st May. Obviously, we will have to maintain distancing restrictions as directed but with those in mind, we can now start again to do what we do best.

In the meantime, much, as you will read, has been happening on the Bala Lake Railway during March, so much so that the editor of the Locomotive Conversation and Learning Trust Newsletter, that august body created by our BLR Trust Chairman, Julian Birley, was prompted to describe recent activity on the BLR recently as ‘rampant’. Whether the progress of a Heritage Railway has been hitherto described thus is unknown but it matters not as it is totally positive.

There are two simple reasons why so much has been achieved, namely local staff/volunteers plus very astute management, as we will see later. Two members of the three salaried staff live in the immediate vicinity of the railway as well as a handful of volunteers, so even if the railway is sticking rigidly to the ‘five mile’ Welsh Government dictum, it still has a small workforce on which to call. The relaxation of distance restrictions on the 29th meant that the railway could then welcome volunteers from further afield in Wales, and such was the enthusiasm that several were itching to return to Llanuwchllyn. 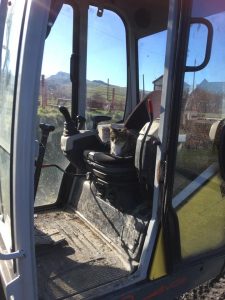 The first work project at the beginning of the month entailed dealing with the culvert at Brasso’s Cut, located just to the east of the Dolfawr Bank. Every year, an enormous amount of storm debris is washed down from the hills and is deposited over the track-bed. The last time this happened, about four tons of rocks, stones, sand and other detritus were cleared by hand, a back-breaking job, so it was decided to deal with the problem once and for all by hiring a digger to clear the ditches and culverts.

The digger duly arrived (into which Marian, our railway cat, promptly took up residence) and filled six skip wagons which were then taken to the other end of the line near the Bala Sailing Club to help reinforce the embankment. 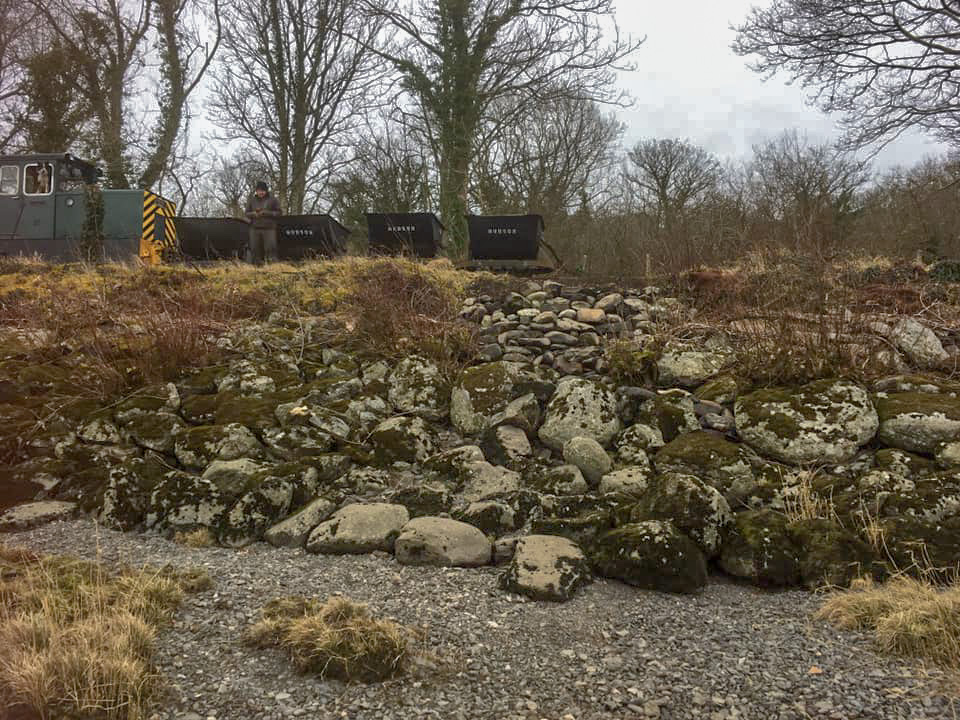 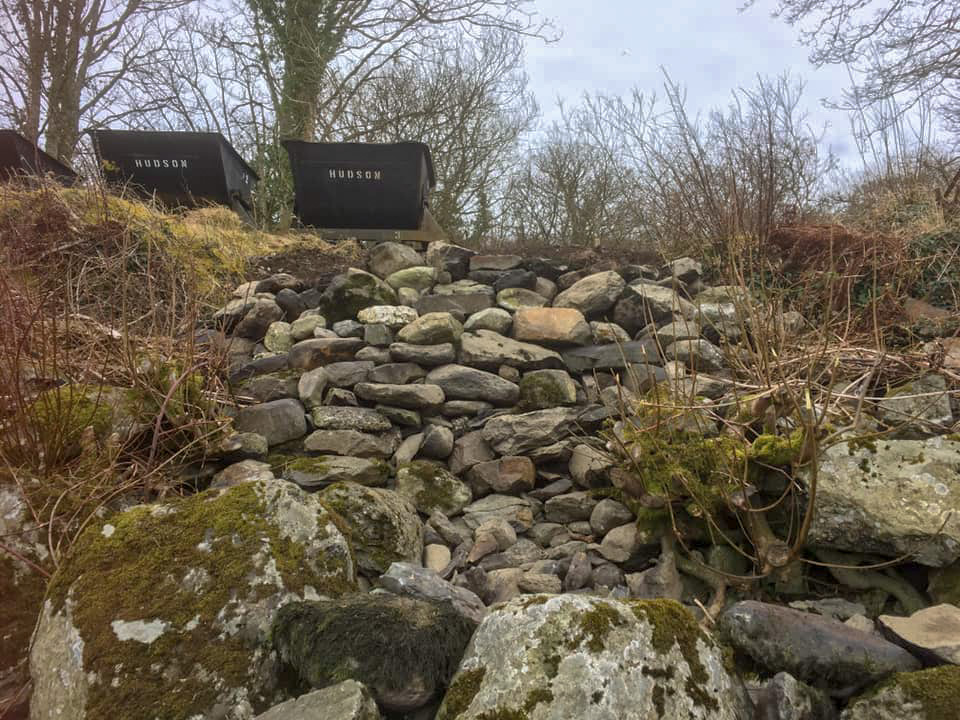 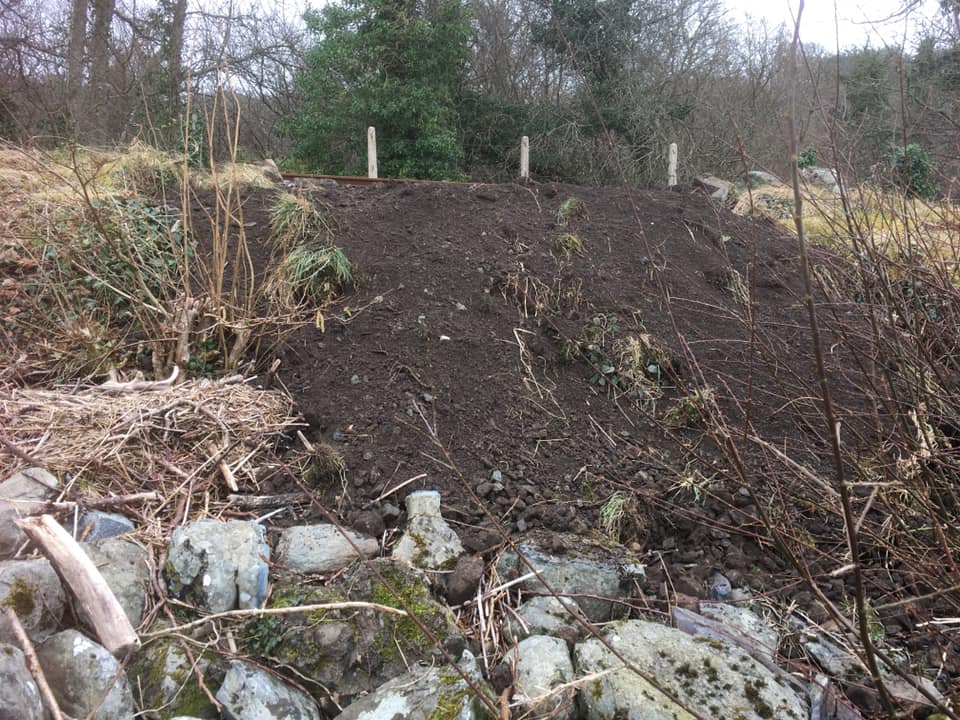 The digger came into its own at the end of the month as well when attention turned to Pentrepiod Halt where the crossing to the (occasional) field campsite was rebuilt, a railway responsibility. Track was lifted, the track-bed was dug out, new sleepers laid as well as new crossing timbers. 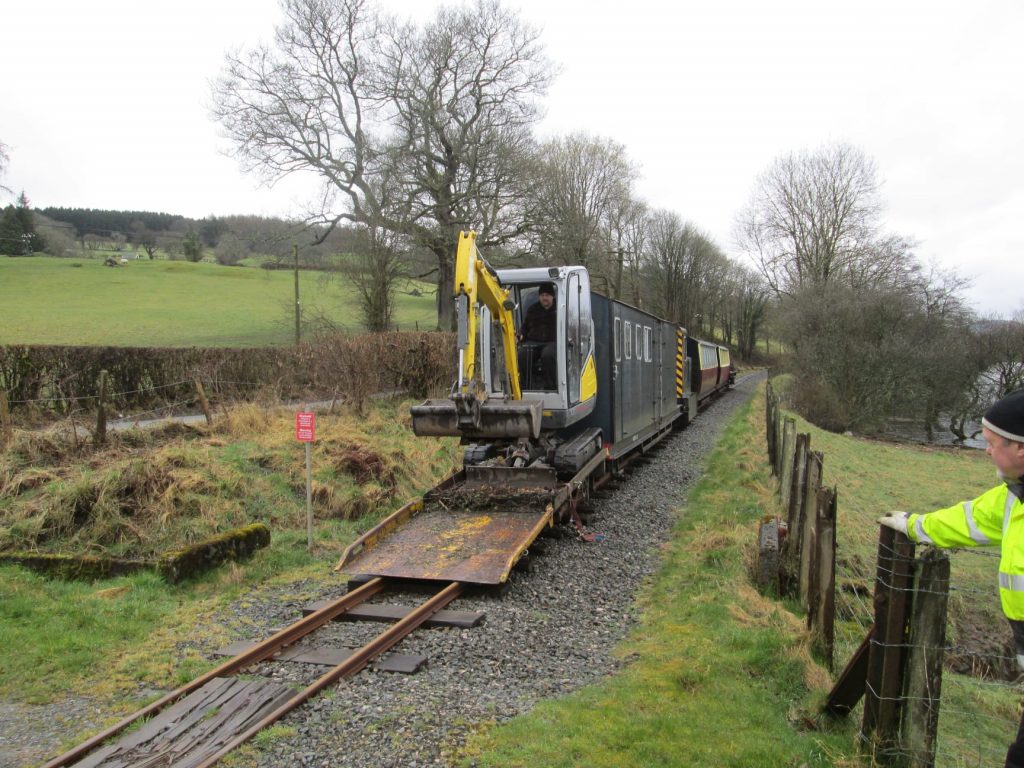 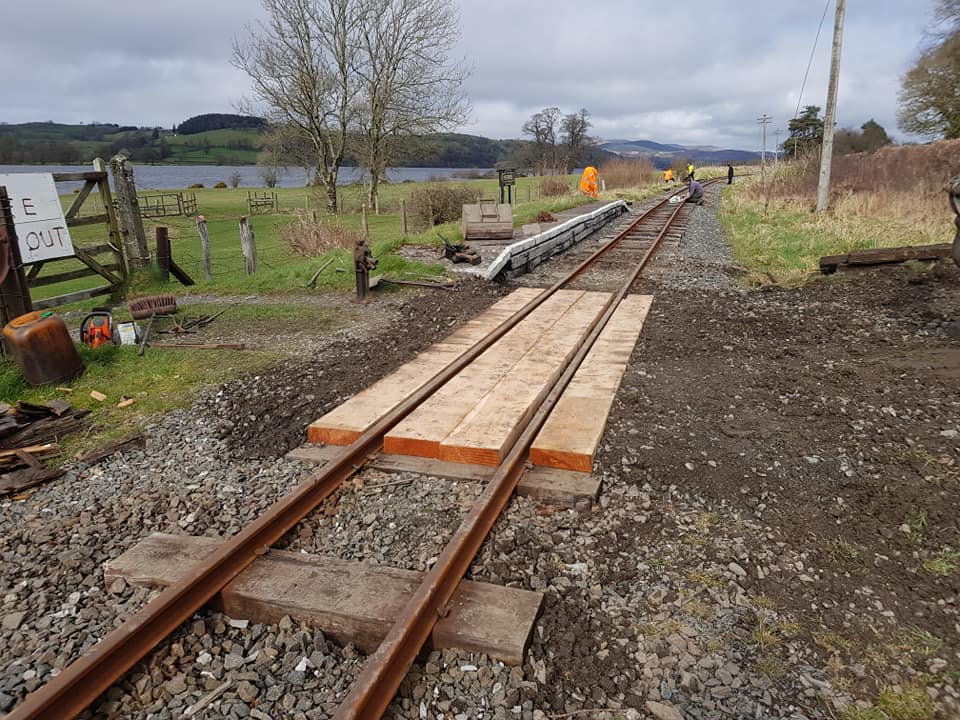 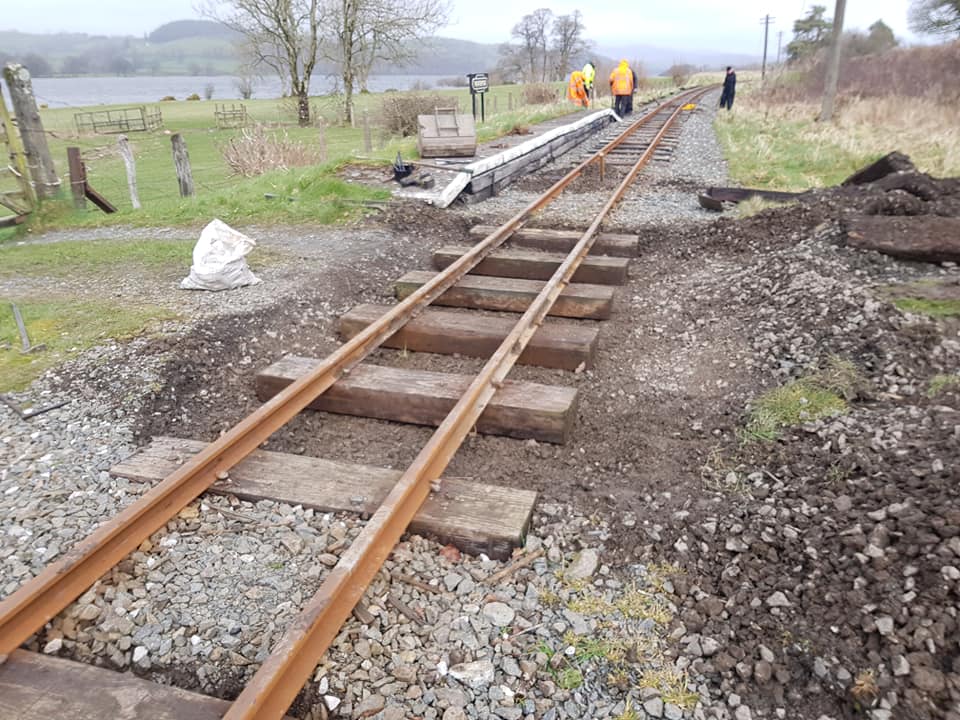 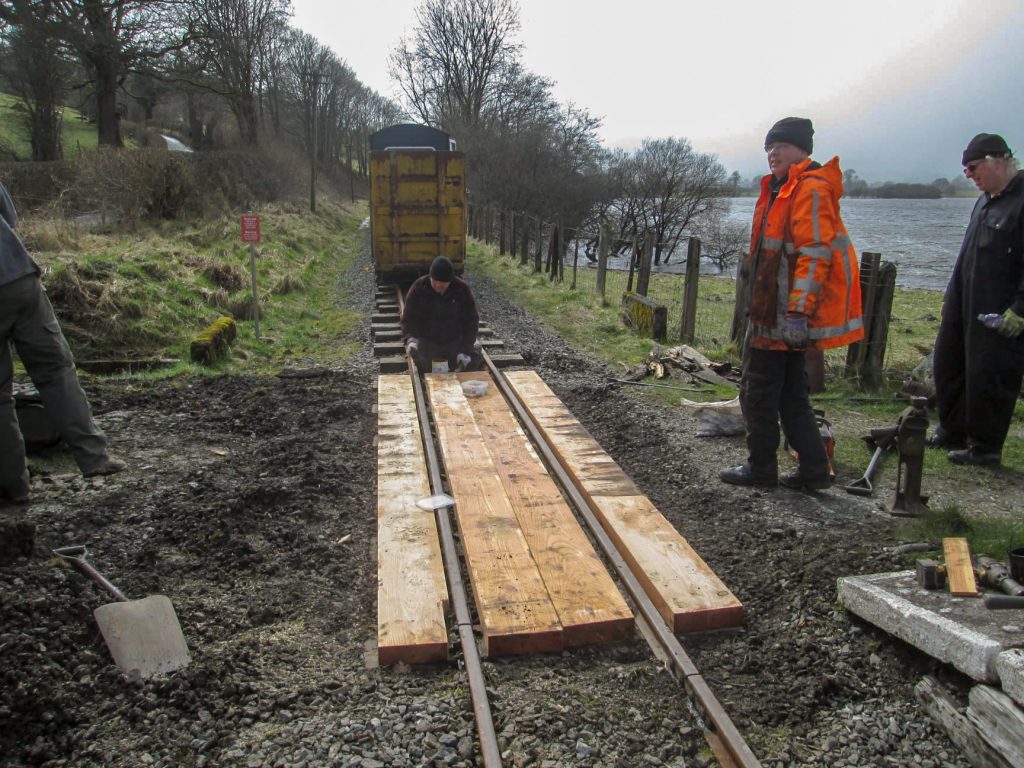 While in the area, some ‘spot-sleepering’ took place. This is where ageing sleepers are marked and swapped for new ones. This is not an ideal situation as replacing the odd sleeper makes grading the track for a smooth ride rather difficult whereas replacing a whole section, lifting track, re-grading the ballast etc. is always the preferred option.

But in this instance, until the next major track re-laying session takes place, this will suffice and the condition of every suspect sleeper in the locality is recorded on a spread-sheet, a practice instigated by General Manager David Jones soon after he arrived at the railway seven years ago.

The crossing work followed on from a working weekend where a small group went off to deal with the perennial problem of tree growth near Bungalow Bridge and the bottom of Dolfawr Bank, the hired-in chipper making quick work of disposal in these two locations.

Needless to say, our Chief Engineer’s dog, Max, was enjoying himself, either in the lake or sitting directly in the trajectory of the chipped branches, seemingly without the slightest concern!

After his unorthodox shower, he simply stood up and shook it all off.

At the beginning of the month, the March edition of Steam Railway magazine carried a lengthy article on the Red Dragon extension project into Bala, going into even more concise detail than before. This was particularly relevant and timely in view of the success of recent appeals and agreements. As always, it was a very well written piece, complimented as usual by erudite comments from the BLR Trust Chairman Julian Birley. That erudition was also put out over the airwaves later in the month when BBC Radio Wales included in one of its half-hour Regional Round-Up programmes a five-minute interview with Julian in which the Trust’s plans and aims were highlighted, thus reaching an even wider audience.

News of our locomotives this month starts with an update on the Avonside which you will recall was dismantled and the frames/motion transported to owner John Moorhouse’s base in the Midlands. As he reports, work on the cleaning and refurbishment of the frames and ancillary bits progresses well, weather permitting, and he soon hopes to begin the process of replacing steel. Likewise, as and when travel restrictions allow, he is looking forward to visiting Llanuwchllyn to see what can be done with the loco’s boiler.

On other locomotives, Alice is awaiting the fitment of her brand new riveted boiler, George B and Maid Marian are being prepared for their annual steam tests and the boiler of Holy War is at the Severn Valley Railway awaiting her hydraulic test (high water pressure which will show up the slightest leak), the results of which are due any day now. 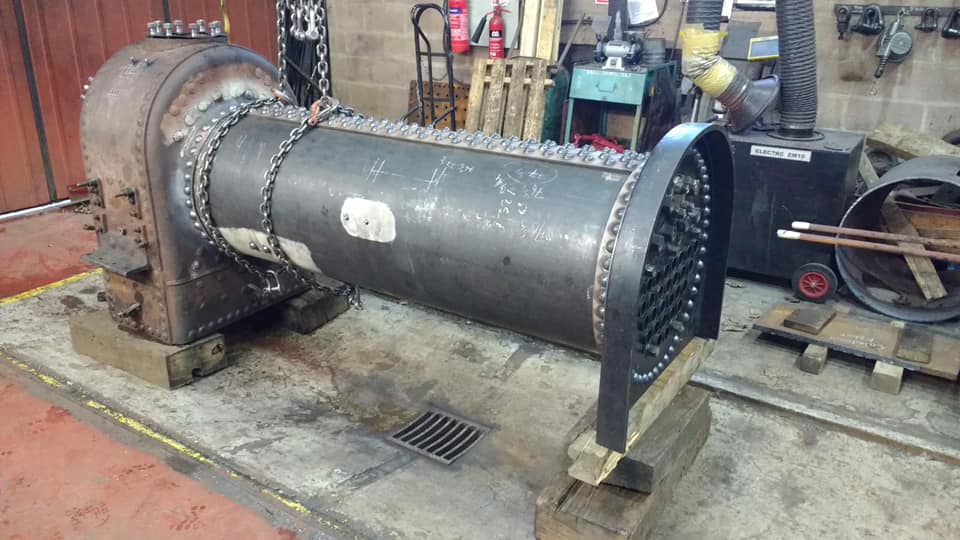 Major building works have been taking place during March, the most prominent being the entire re-roofing of the loco shed which had become rather draughty and leaky, much to the disdain of our railway cat, one of whose residences is inside the shed. Including new light-admitting panels in the fresh roof will make the whole working environment so much better. 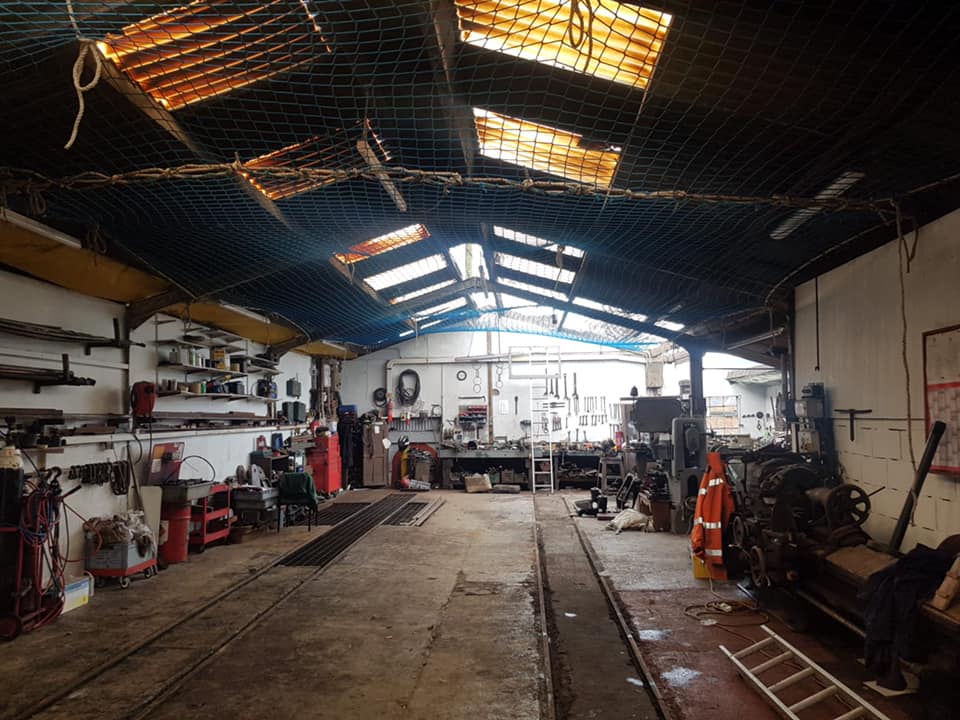 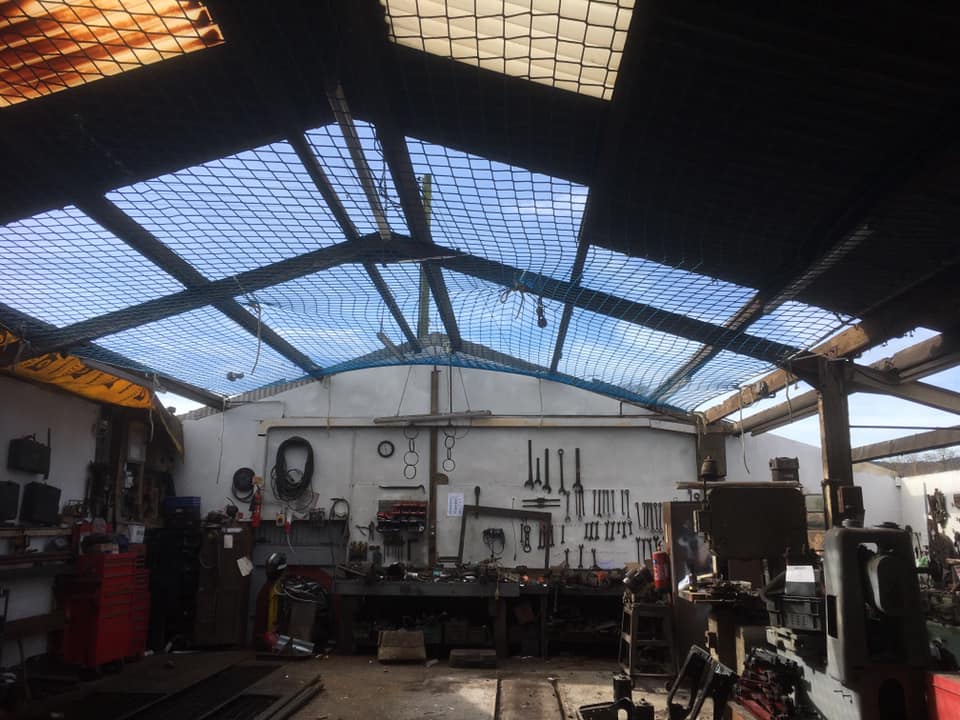 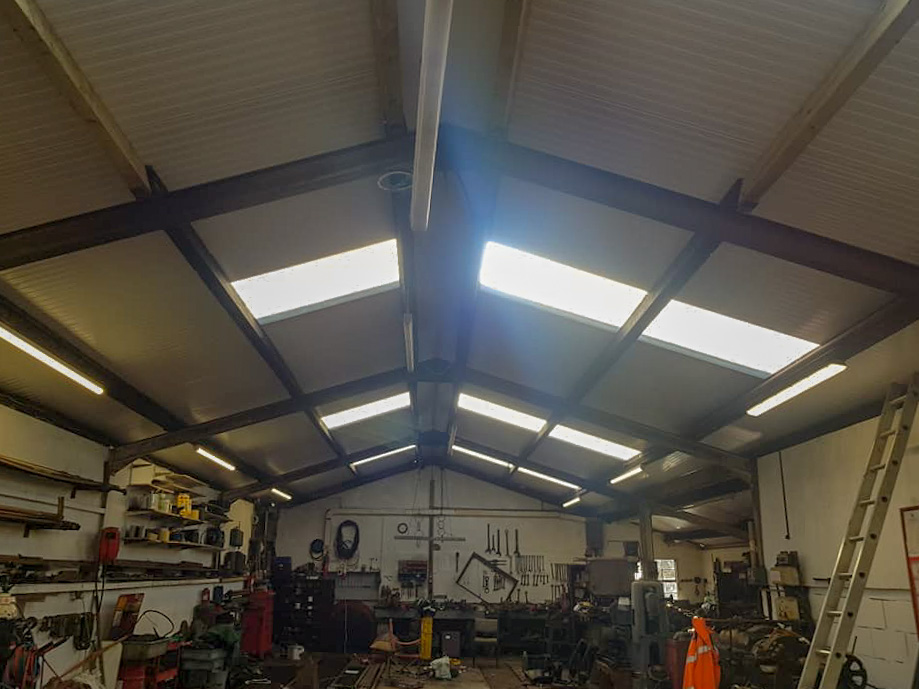 As well as this major operation, the slate roof of the office (formerly the ‘down’ platform waiting-room in GWR days) has also been redone completely, the only downside of this operation being the necessary scaffolding partially obscuring the station webcam! 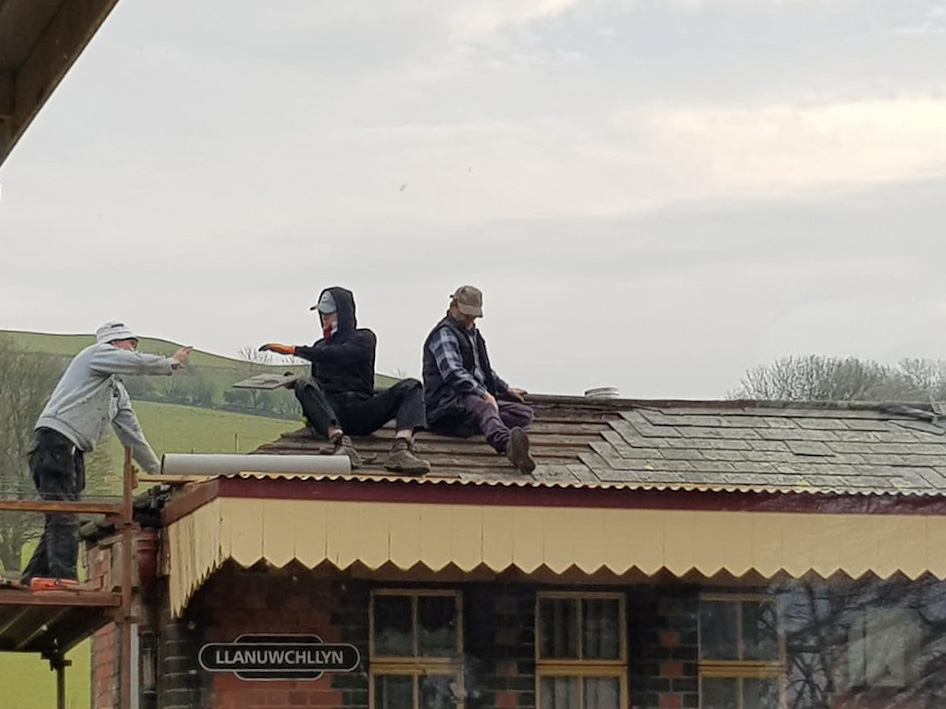 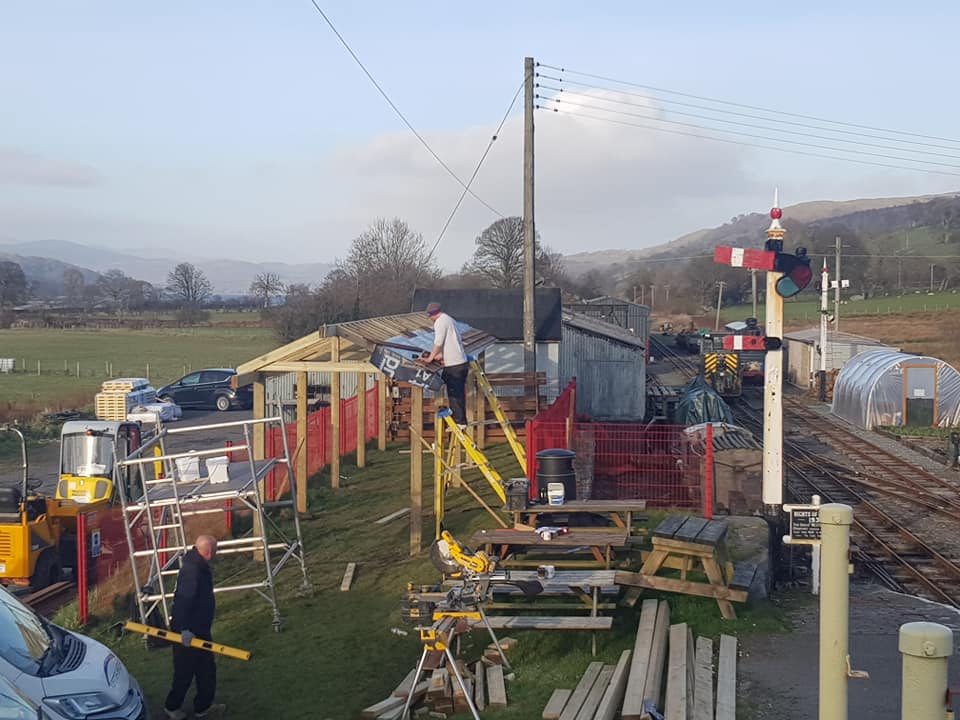 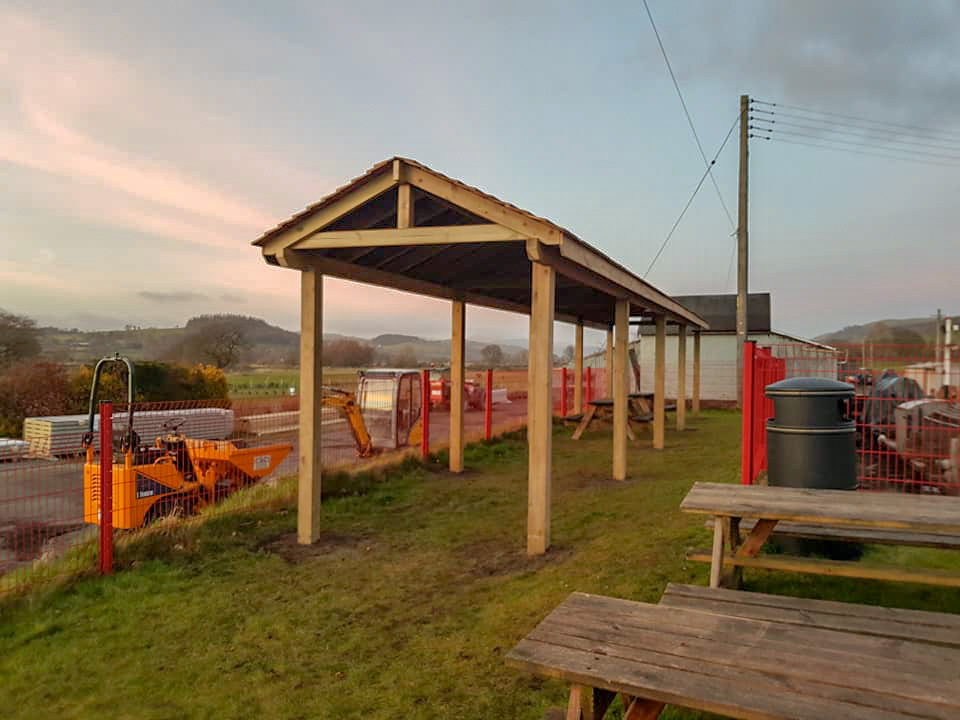 With proximity restrictions probably in place for quite a while yet and all seating to be outside rather inside the café, a fine new wooden canopy has been erected over part of the picnic area.

Another job already started is the painting of the underside of the station canopy and it is hoped that this will be finished soon before the season starts. All in all, frequent visitors will see that a host of improvements has taken place during the lockdown. 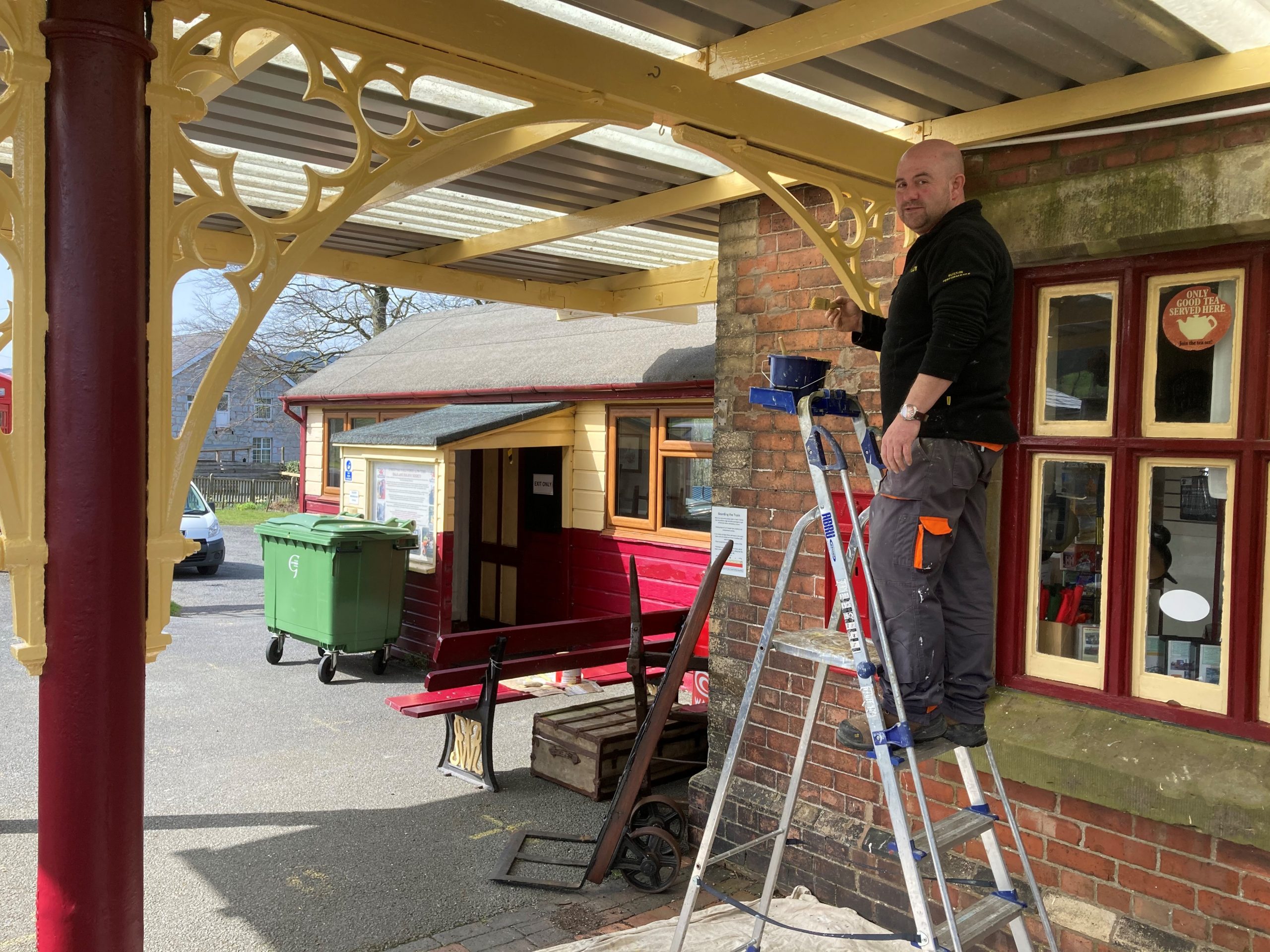 It is worth mentioning that all these building projects are being carried out by local contractors, a firm BLR policy. The loco shed roof was done by Martin Jones, his company being based in Llanuwchllyn, and it was his company which built our Heritage Centre so well. Likewise, local firms were contracted to do the re-roofing of the office and painting the canopy, a policy mirroring the Trust’s aim for the BLR Extension into Bala to augment the impact and profitability of local businesses.

Now that scheduled services can resume, our programme of special events is really looking like reality and checking the BLR website regularly will show what is planned in the way of events. We have dates set, for example, for the Bala Re-Railed Extravaganza in June, our Steam Gala at the end of August and the Model Railway Show at the end of September. BUT, we have to keep in mind that this pandemic is not defeated (look at the current situation in Europe) and until we receive a UK-wide ‘all clear’, it would be totally irresponsible to issue any firm details, so please keep an eye on the website for the latest updates and information.

And finally…… our delightful cat, Marian, is garnering quite a following and we include photos of her whenever we can. We show one of her, taken by David Jones, keeping an eye on Dan Laidlaw as he fixes in place the window frames of Carriage 8 (located incidentally in the Heritage Centre) while Rob Houghton is just visible inside holding everything steady. The floors of this refurbished carriage have now been replaced and soon the seats will be refitted. 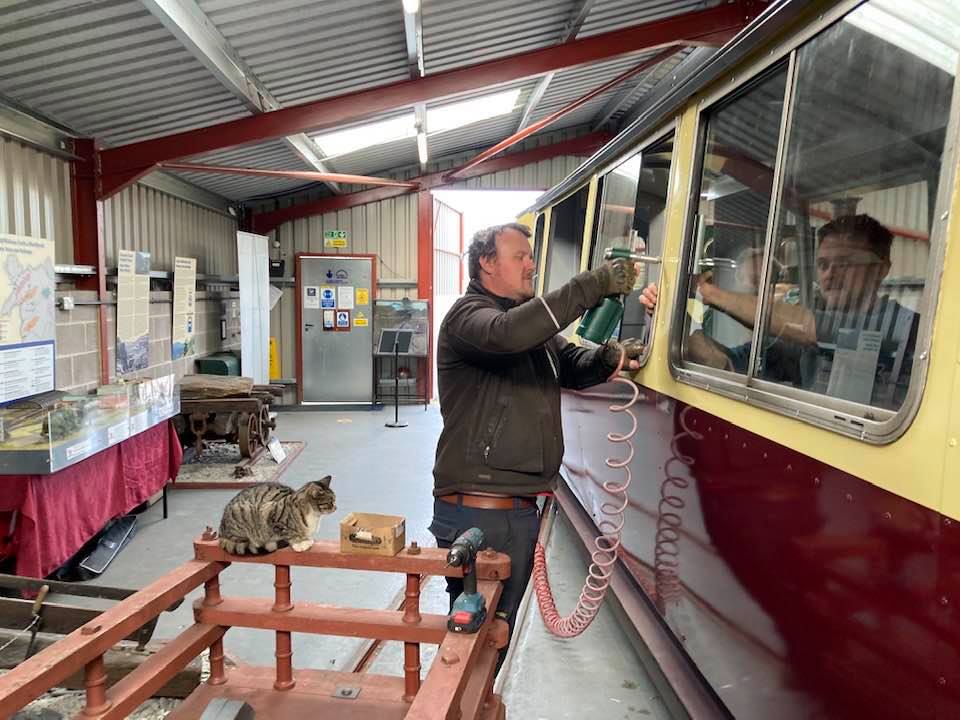 As we said, it has been a busy month.