With the Bala Lake Railway re-opening on the 1st May, activity has been predictably frenetic so that our first visitors of the year can be accommodated in total safety as per Government dictums. The café and shop are ready for business, with perspex shielding in place so that visitors can browse the shelves or order refreshments in total separation, not exactly easy with the cosy nature of our main station building. The public conveniences have their ‘traffic lights’ from last year in place, a distancing system which works remarkably well. Outside, visitors will note the fresh new paint on the platform canopy plus the re-roofed office across the tracks. Likewise, as we have mentioned in previous reports, there is now a fine new canopy over the picnic area so that should there be an outbreak of the renowned ‘liquid sunshine’, all the action can be viewed while lunching al fresco. Incidentally, but probably not noticed by the public, the ‘running-in’ sign on the main platform has been beautifully repainted and remounted. 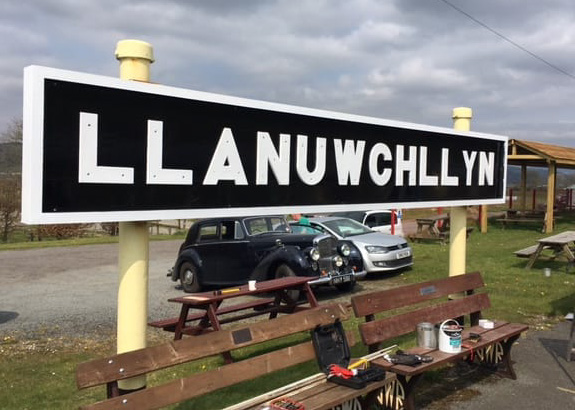 Elsewhere, our permanent crew of Chief Engineer Rob Houghton and Dan Laidlaw have really been burning the proverbial midnight oil in their strenuous efforts to make sure all is ready from the engineering side. The Guards Van Coach is now finished with numerous improvements to keep our guard team happy, including re-modelling the actual compartment to make it less cramped than before which will deal with mutterings hitherto! It is also wheelchair-friendly, a very important aspect of any public service these days. With the completion of work on the coaches plus the fine new roof on the loco shed, the Heritage Centre has been returned to its original function (although it cannot yet be opened to the public until the regulations change), the well-lit space having been used for work on the coaches. Everything is getting back to normal. 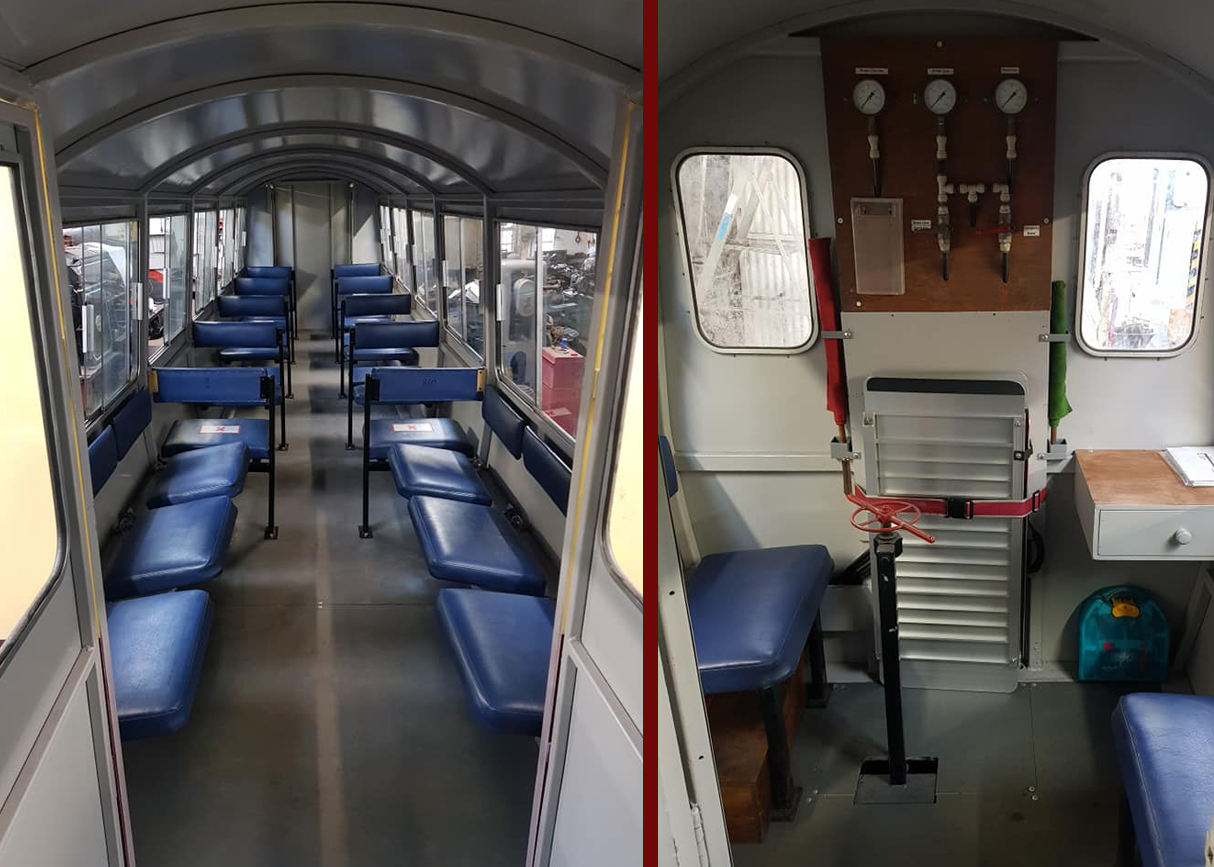 As regular readers will know, much has been happening with our locomotives and on the 9th April, George B and Maid Marian were steamed to make sure everything was well after their extended slumbers. We show a delightful photo of our railway cat, Marian, inspecting the gauges. She gets everywhere. 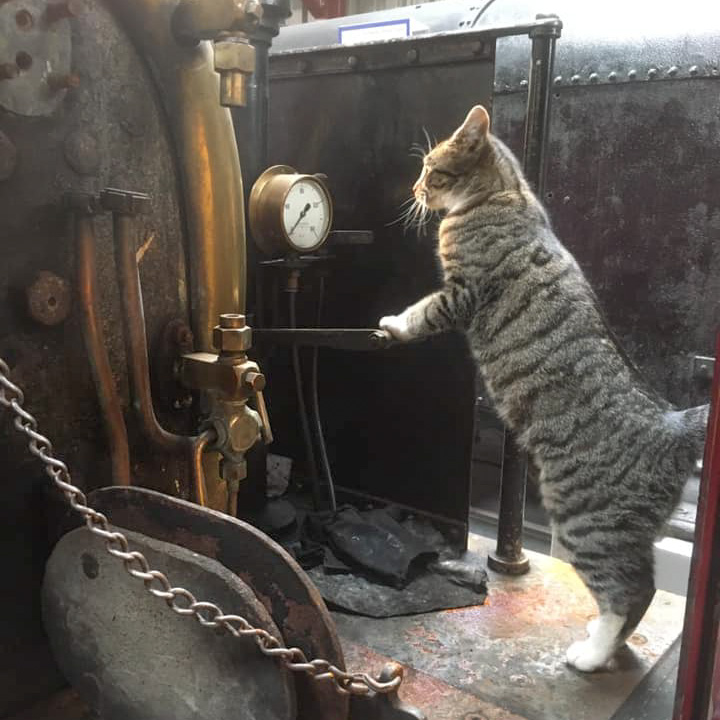 Chief Engineer Rob had noticed that the injectors of George B were getting rather temperamental thus he decided to attack the problem before the season started. Having sourced the original drawings (which helpfully showed measurements in both Imperial and metric!), Rob discovered that the cone floats should have a gap of around 0.5mm but promptly found that one was 0.1mm, which explained why the injector would not pick up. Rob duly inserted and silver-soldered a new one with the gap set at 0.6mm, thereby giving scope for readjustment at a later date. 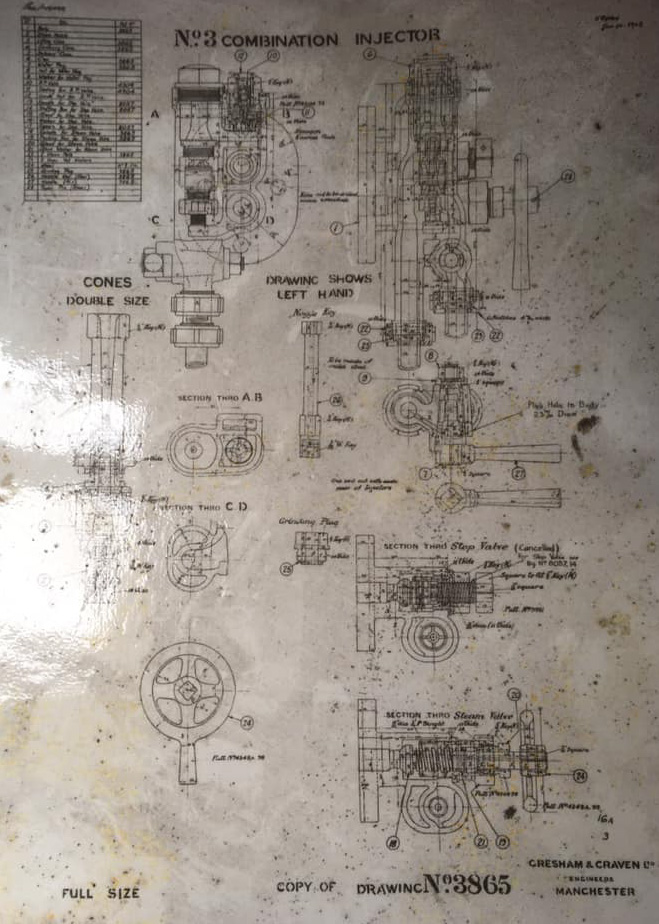 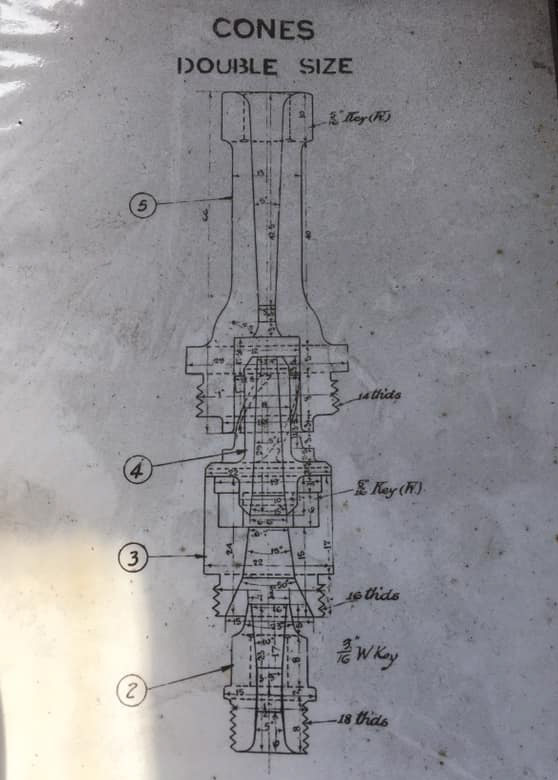 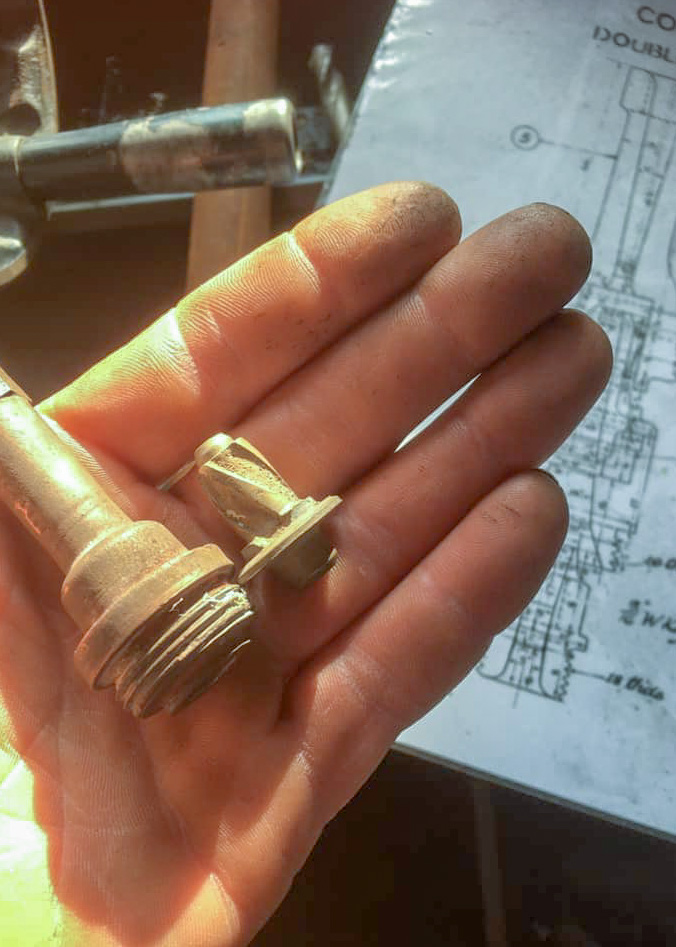 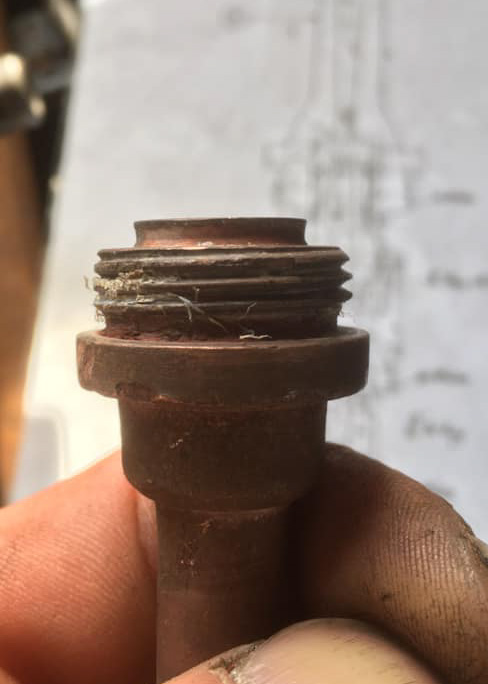 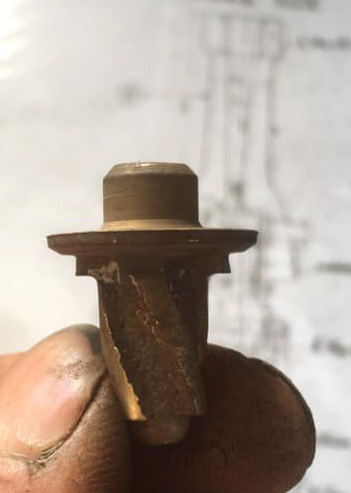 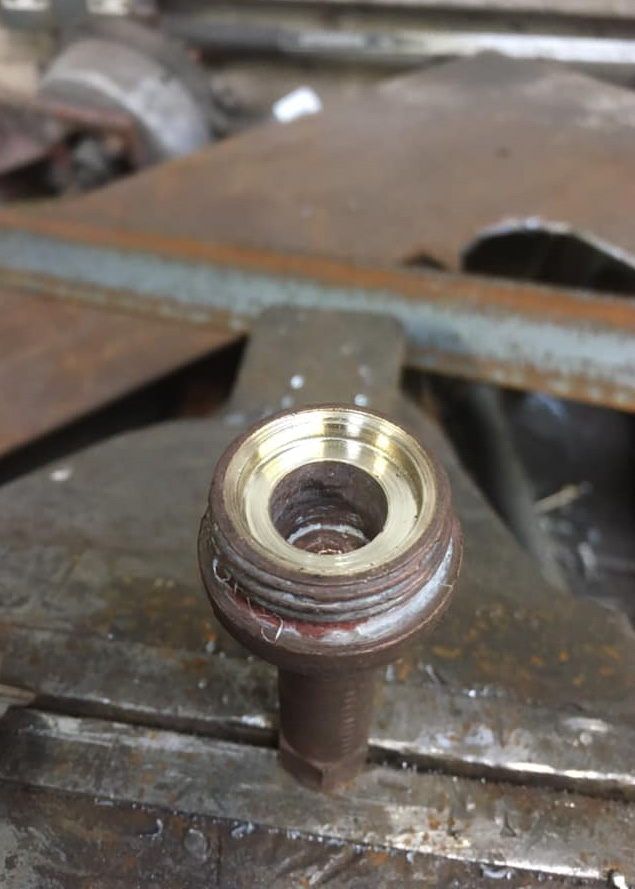 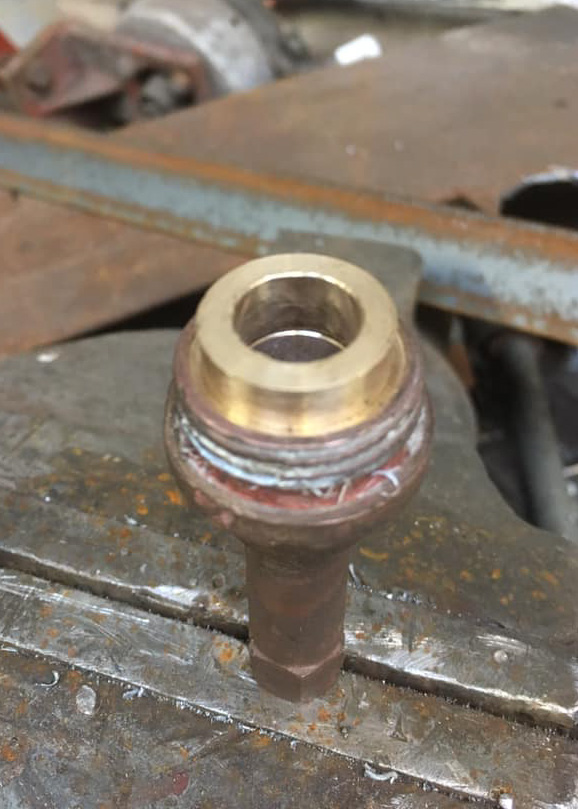 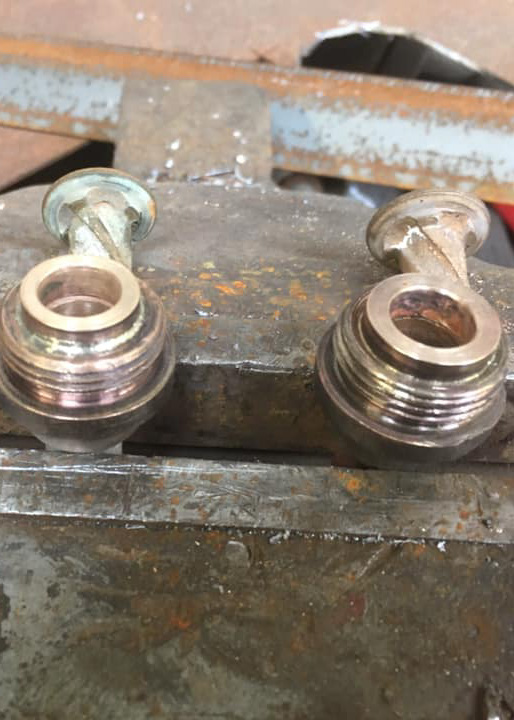 The boiler of Holy War had its hydraulic test at the Severn Valley Railway on the 12th April and we are glad to announce that it passed with flying colours, the boiler arriving back at Llanuwchllyn on the 28th April. This means that it can now be re-united with the loco’s frames and the pieces of the new smokebox which are waiting for her, after which she will start to look like a Hunslet again. More reports will follow as she emerges from her 10-year overhaul.

A most successful working weekend took place around the 10/11th of the month and the parties fell into two groups. On the Saturday, a detail arrived at Llanuwchllyn and loaded the railway’s stock of 7¼ inch track for shipment to the new Bala station site. Concurrently, two-foot track had already been loaded at Dinas, courtesy of the Welsh Highland Railway, and had arrived at Bala whereupon it was laid in advance of our Bala Re-Railed Event on Saturday, 12th June. A loader had been organised, courtesy of a local building company, and made quick work of unloading the two-foot track for later final positioning by muscle-bound volunteers. This momentous and memorable operation was the first time that track had been laid in the town of Bala for many decades, and in two gauges as our 7¼ inch track will provide alternative rides on the day, another first for the railway and the town. It should be stated that the two-foot track is not permanent as the plans for the station yard at Bala are more complex but it will be tangible proof for the people of Bala that the BLR and the BLR Trust really mean business and will give a flavour of what can be expected in the future. For those fortunate volunteers who were beavering away at the station site, they will be able to tell their grandchildren that they helped to lay the first track at the new station in Bala!

On the following day, the second party reverted to usual maintenance where more spot-sleepering was finished off at Pentrepiod Halt, after which some of the timbers at crossings down the line were renewed as well as other odd jobs to be dealt with prior to opening, such as tree-pruning near Bungalow Bridge.

The Bala Lake Railway Society is always working to further the interests of its members and our energetic Chairman Dave Rutt has announced an interesting addendum to its activities.

A new group has been formed by the BLR Society to maintain and improve the facilities at Llangower station, the line’s picturesque ‘half-way’ halt by the lake. The Llangower Group met for the first time on the 25th April and set to work painting and preserving the infrastructure as well as completing the new signal box. Plans for the future include new fencing, a waiting shelter and facilities for the sales of drinks and snacks on peak running days.

BLR Society Chairman Dave Rutt said; “The station at Llangower is in a beautiful setting by the lake and this group aims to give the station the attention it deserves, transforming it into a little gem that the railway can be proud of”.

By concentrating on one particular location, it is hoped that this will heighten members’ sense of involvement and pride in a really worthwhile exercise. The group will start monthly working parties later this year and if you would like to join, please contact the BLR Society via https://bala-lake-railway.co.uk/society/ for more details.

And finally....... In a similar manner in that a certain famous Bentley seems to appear frequently in photos, our railway cat was caught using an advantageous location on, of all places, a loco chimney, either to surprise any passing inattentive mouse or, more probably, keeping an eye on what the staff might be doing. 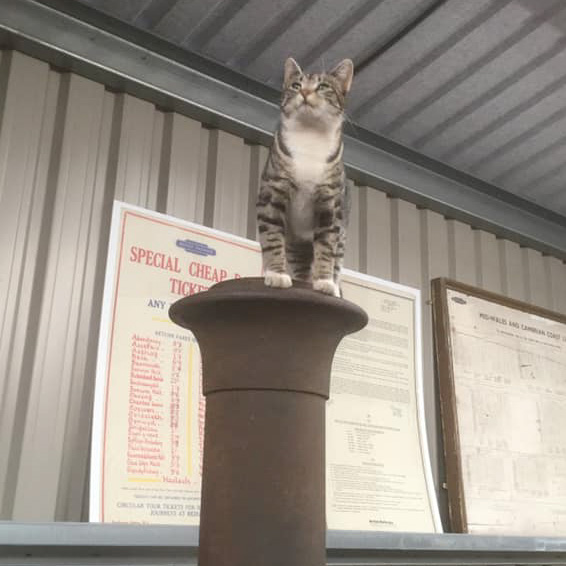 The latest issue of Steam Railway magazine is of particular interest this month because it features on page 22 a lovely photo of our accomplished fireman Liz Partridge who is also one of our most loyal and frequent volunteers. Whatever is needed, we can rely on her. 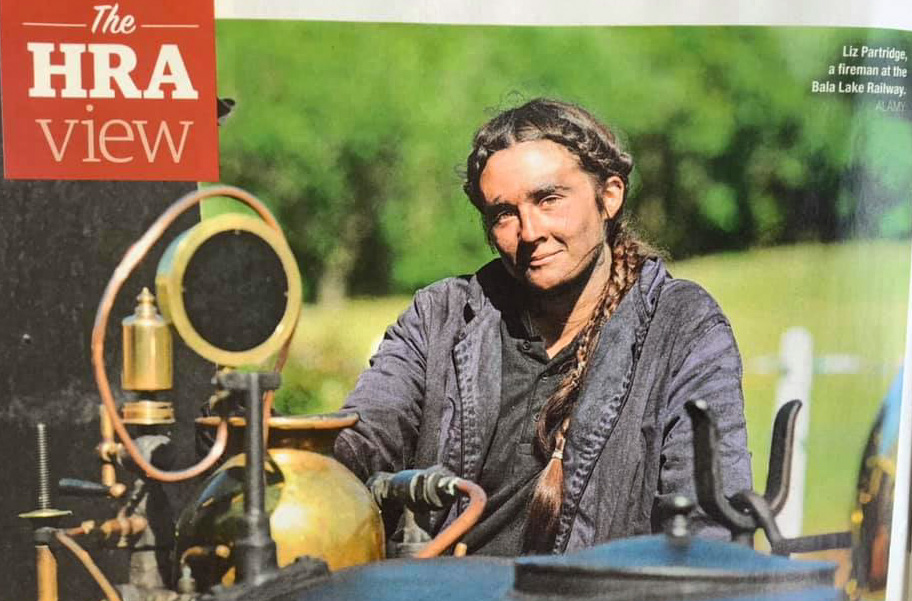