2021 was a year to be proud of. In spite of persistent restrictions, ever-changing Covid precautions and the railway not opening until 1st May, the BLR recorded final passenger numbers including the Mince Pie Specials, of which more in a moment, which were no less than 8.5% up on our previous best year which was 2019. All agree that it was quite a performance bearing in mind what the whole leisure industry has had to contend with. There is enormous and justified pride in Llanuwchllyn.

The Mince Pie Specials took the place of the previous Santa Specials as Covid restrictions meant that operating in the close confines of Santa’s grotto was not in the best interests of the health of Santa, his helpers or his visitors. The mid-December trains were virtually sold out long before and even though the weather was wet, the whole exercise merited the title ‘success’ from every angle. 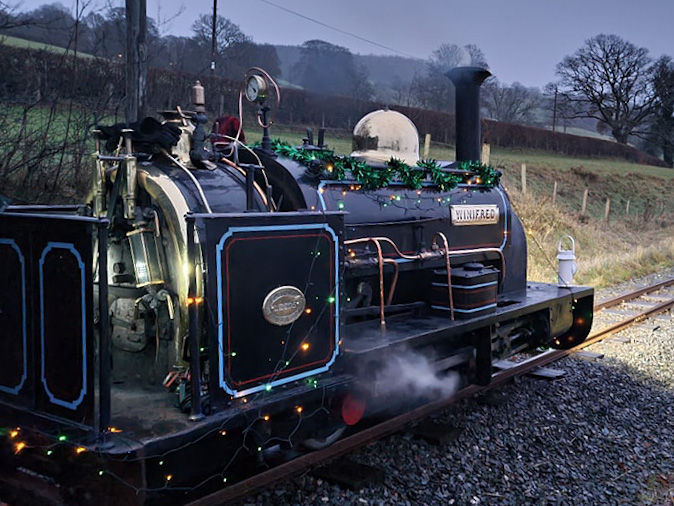 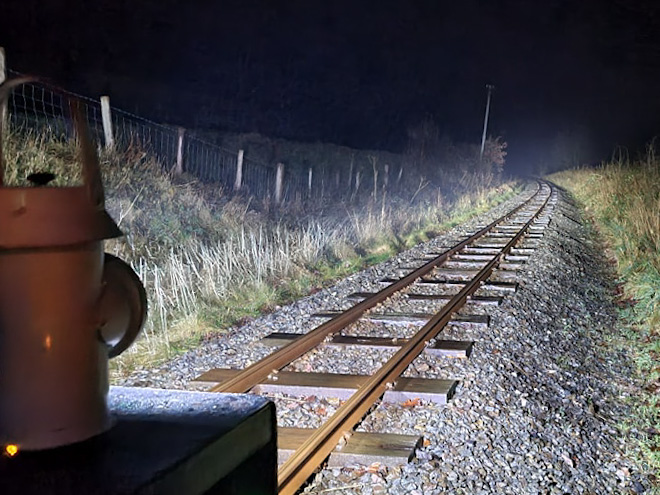 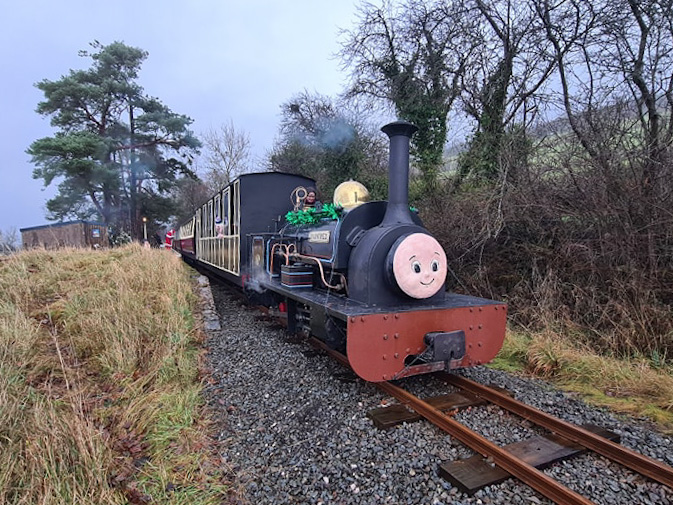 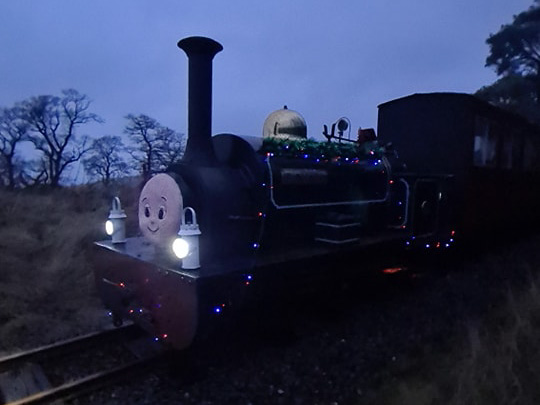 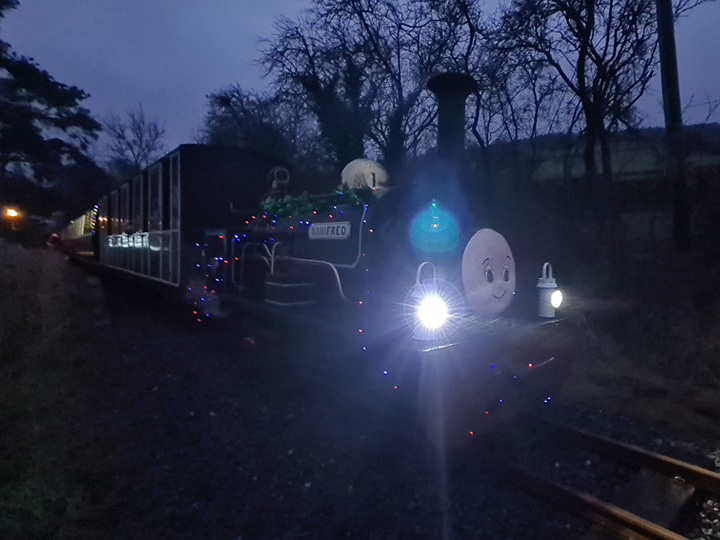 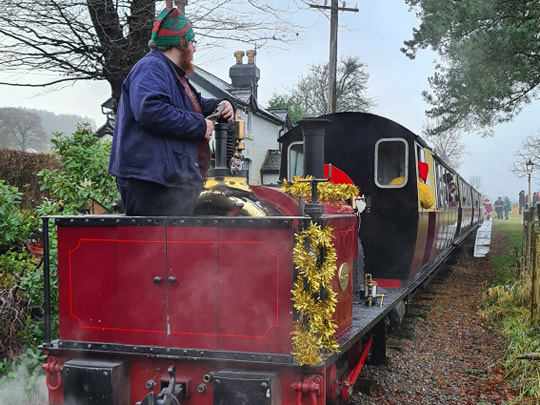 This time, the trains ran through to Llangower and then steamed back to Flag Halt where Santa was waiting outside on the platform with little gifts for the children plus mulled wine and mince pie for the adults. One delightful aspect was that a band accompanied the intrepid visitors, with ‘Astrid’, a Dutch Street organ, having already got everyone in the festive mood on the platform at Llanuwchllyn. The band took up residence in one of the open sided carriages and a flexible screen was erected to protect the musicians from the elements but they played with gusto and soon got everyone into the festive mood with their repertoire of seasonal music and carols. As usual, the inclement weather did absolutely nothing to dampen the atmosphere.

One notable aspect of the festive trains which ran after dusk was the lighting on the front of the locomotive which might be just taken for granted but upon investigation by the curious proved to be a piece of sheer brilliance and ingenuity. The brightness and power of these lights were something to behold and were the work of perennial volunteer Thomas Haynes who actually built them a couple of years ago.

How were they made? Each light had three COB LEDs, (COB being Chip on Board – a member of the LED family) with magnets underneath. The structures into which they were fitted were actually adapted bits of waste pipe with other associated fittings. With multiple LEDs mounted close together as one lighting module allied to magnets underneath, a colossal spread of powerful light is emitted and had to be seen to be believed. Tim Williams’ short film of a train arriving in Llanuwchllyn illustrates this to very good effect. Indeed it also meant that long before the loco appeared at the bottom of Dolfawr Bank, almost a mile away, a radiant glow could be seen in the woods long before the loco hove into view. Our team’s ingenuity knows no bounds.

Work and maintenance on the carriage stock continues with the revitalised carriage no.4 progressing well with the guard’s compartment nearing completion during mid-December. 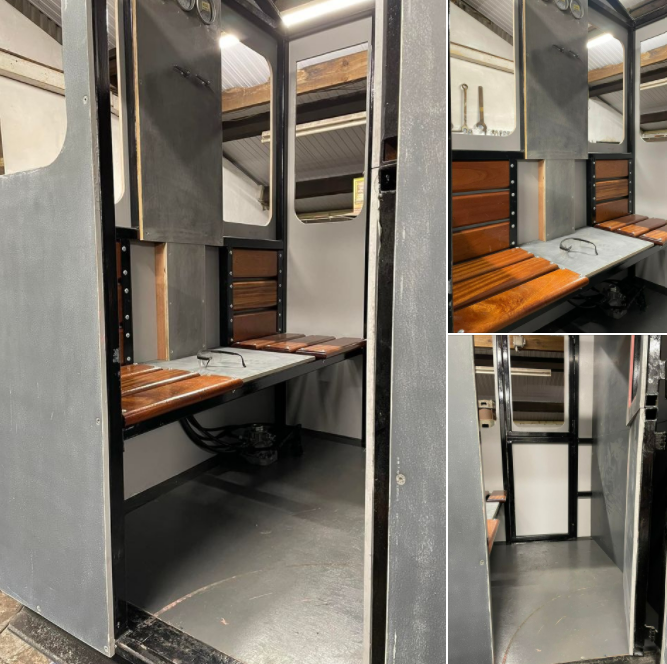 The Penrhyn Coach has received its final coat of primer but before any further painting can take place, work on the roof has to be finished, by which time it is hoped that a final colour scheme will have been decided upon. We will report more next month.

Just after the Mince Pie Specials, some serious work started on a troublesome culvert, not one of the usual ‘suspects’ but one that is located on the curve just before ‘Boathouse Bridge’ which is near the John Lewis Hotel approaching the end of the line (for the moment!).

This drain has been a problem over the years, to the extent that after a deluge and the consequent amassing of run-off from the hills, the old drain could not cope and on occasions caused the road to flood. Not wishing to upset the Council with which the railway has a very good relationship, it was decided to deal with this once and for all.

Last winter, our engineers, Rob Houghton and Dan Laidlaw, found that the pipe had partially collapsed on the lake side of the line and dug down to the culvert by hand, finding the precise spot of the collapsed pipe and unblocking it. The pipe, which is probably an original from when the Bala and Dolgelly (sic) Railway was built around 150 years ago, was left open with a safety fence to protect the deep hole. The plan this time was to insert a narrower pipe through the old one, and then close up the hole. Starting from the other side of the railway, the narrower pipe was pushed in but got stuck whereupon another partial collapse was discovered. This was dug out by hand and cleared, and the same happened on each of the next three sections. By this time, they were getting quite close to the rails, having started from the road.

Earlier this year, it was decided to acquire for the railway an early Christmas present in the form of a mini-digger, and after a lot of searching, a good one was found quite close by.

Enter the Digger! Firstly, the rails and sleepers were dismantled, moved and the ballast scraped back. The digger made light work of it and fairly soon, the culprit was found in the form of a seriously collapsed clay pipe full of detritus which had turned a little oval under years of pressure! Volunteer Phil Billington, a civil engineer by profession, was on hand to advise and do the first digging, after which Rob and Dan got busy with the new machine, the operation of which being not as easy as could be presumed. With the ditch now opened and ready, new larger diameter twin-wall plastic pipe-work was installed followed by back-filling which dealt with half the distance up to the original unearthed collapse. The other half was then dug out, new pipe-work cut to size and fitted, with back-filling completing the task. This work will eradicate any problems for years to come. Time had run out thus one of the first jobs which will be undertaken in 2022 will be the re-instatement of the ballast, sleepers, rails etc.

After that, the copious and detailed work programme will be resumed and apart from Half-Term Trains running 19th to 27th February, there will be much to do until the Main Season starts on the 2nd April.

And finally…… in 2022, the BLR will celebrate 50 years since its inception.

Events are being planned and there will also be produced a book outlining the history of the railway, a pictorial album using photos from a broad spectrum of learned sources, not least the BLR archive which so far has amassed over 4000 images. 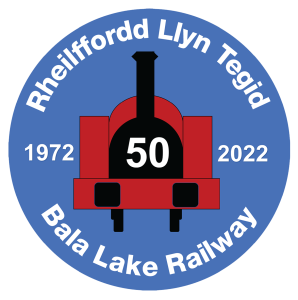 As more information becomes available, details will be widely reported as well as on this site and Llanuwchllyn Express, the magazine of the BLR Society. Watch this space.

The BLR never takes for granted the remarkable volunteer team who turn out in all weathers and always with great humour (more so when there are flapjacks) to keep the railway steaming along. To all our volunteers, as well as visitors and supporters everywhere, we send our very best wishes for a really great and healthy New Year. 2022 is going to be good.