Apart from the typically busy atmosphere at the railway during the past month, January saw the BLR featuring in no less than three modes of exposure, and all to the good.

On the 5th, the local ITV station arrived to do an interview, largely as a result of increased recent activity regarding the extension into Bala. Winifred was steamed for the occasion and the presenter, Ian Lang, sought comments from General Manager David Jones as well as Director Julian Birley. Chief Engineer Rob Houghton was on hand to ensure all went well on the mechanical front and the whole piece achieved, from the railway’s point of view, excellent PR, such were the interviewees’ concise and totally natural responses and descriptions in front of the camera. Click on the following link to view the ITV News article Multi-million pound railway extension plans 'major' for Bala economy and local community 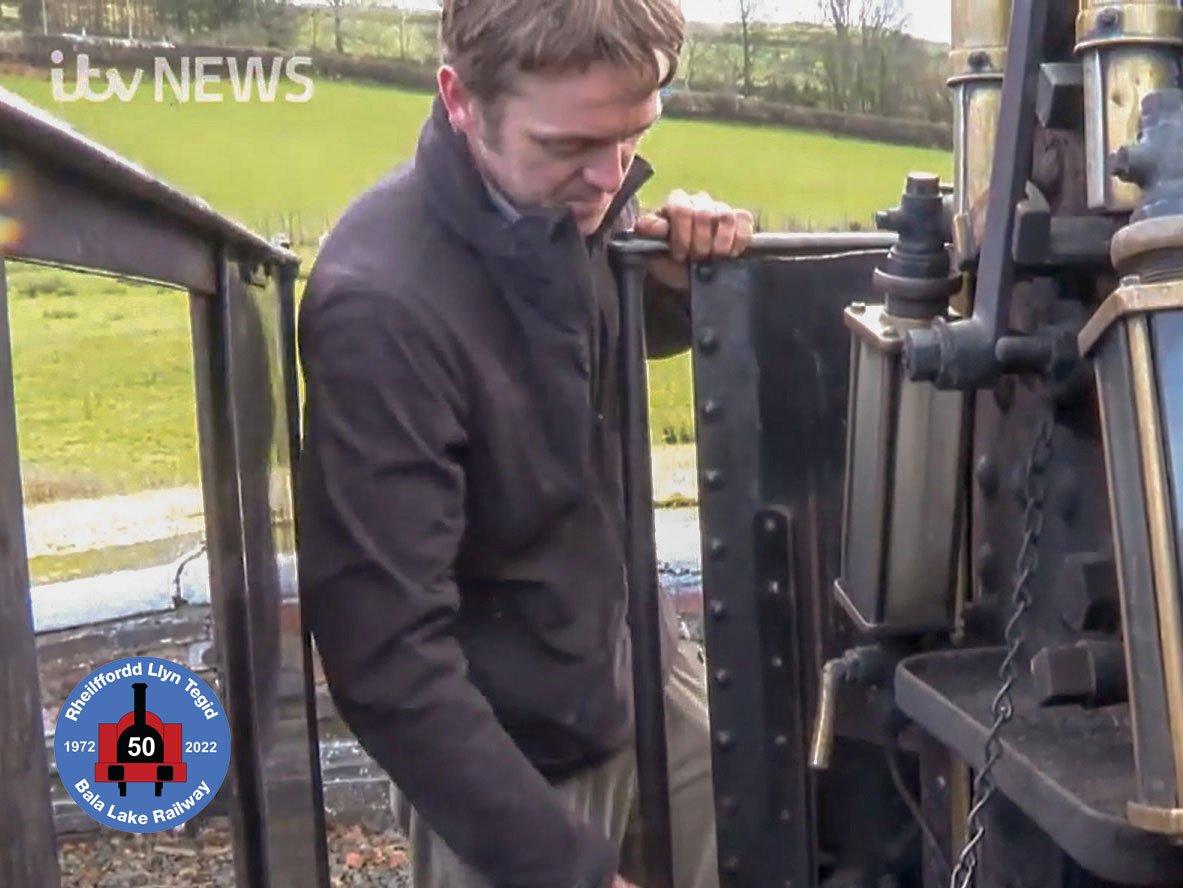 This increase in activity at this time is largely because Natural Resources Wales has already started work on the much-heralded and needed flood defence improvements at the eastern end of the lake and as we have mentioned before, the track-bed of the extension will run atop part of the new works and improvements. This inspiring initiative came from NRW itself, a glowing example of the enthusiasm and co-operation for the whole joint project.

While on the subject of television, the S4C series on Evacuees is being broadcast and is a gripping and, in places, heart-rending account of the thousands of children who were evacuated from the war-time dangers of London, the south east and other major cities during WW2. While S4C is a Welsh language service, these fascinating programmes can currently be viewed on BBC iPlayer with sub-titles.

To complete the trio, The Bachmann Times, the journal of the world-famous model railway manufacturer, printed a five-page article on the BLR and our award-winning Heritage Centre. Any exposure is good exposure, and timely, particularly as Bachmann will be releasing models of well-known Hunslet locos in OO9 as seen in pre-production form below. 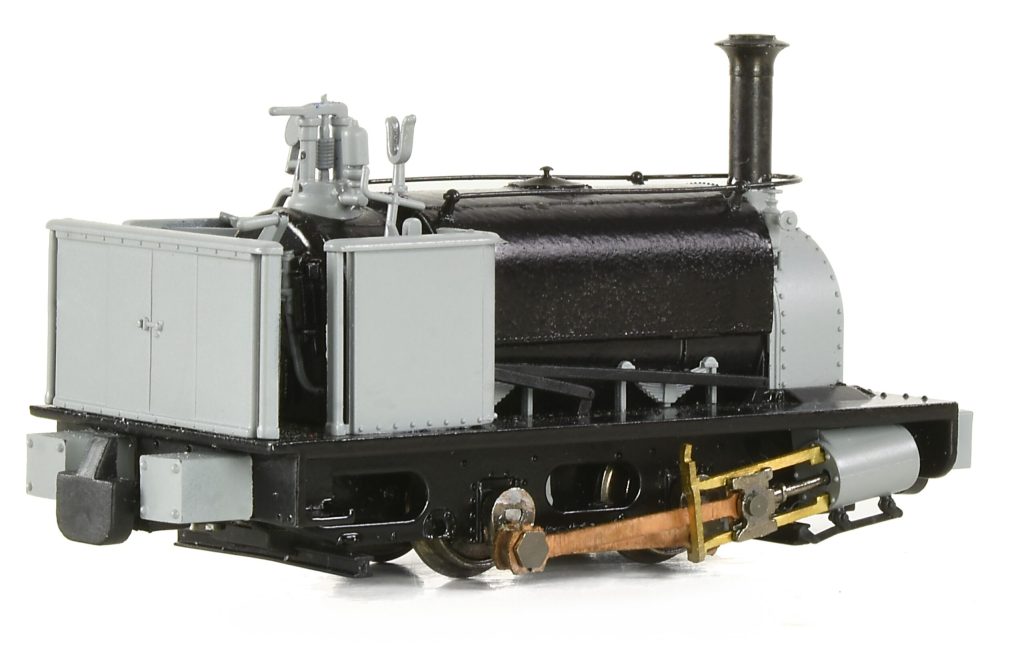 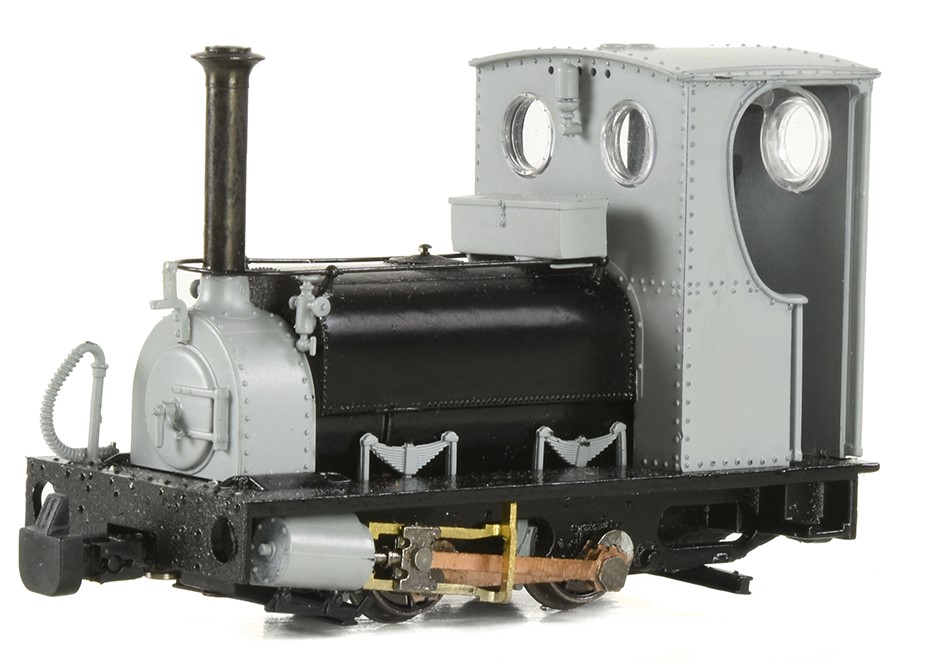 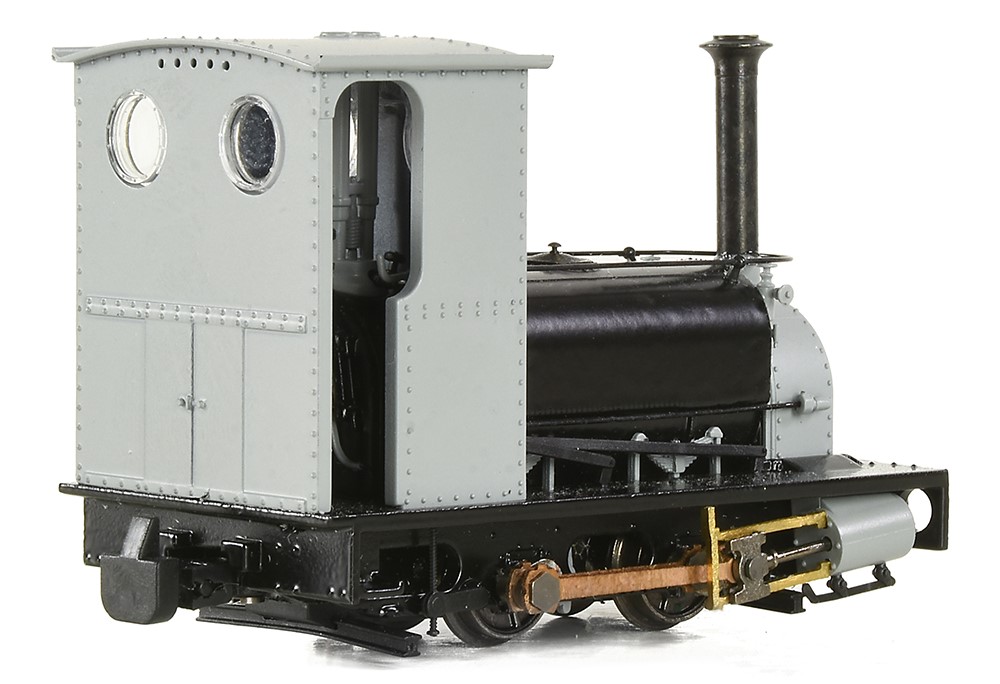 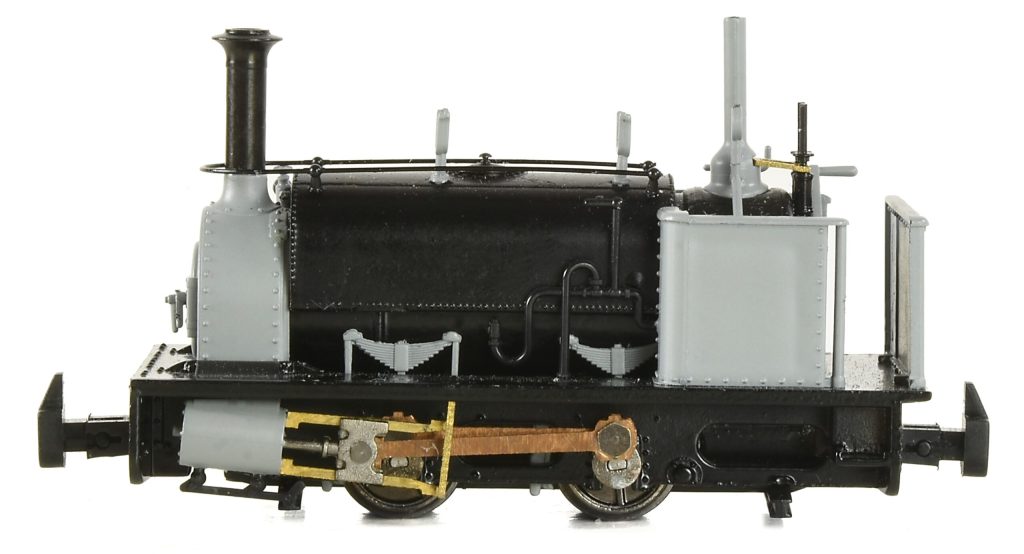 The schedule of Events for 2022 is now on the BLR website and the programme starts with half-term running in February. The railway will open on Thursday 17th and then from the 19th to 27th thereby being available to cover the half-term periods of differing school authorities. As always, to celebrate St David’s Day, local people who live in North Wales will be able to travel free on the 27th February, this being the nearest operating date to the 1st March. However, this year, because we still have restricted capacity, tickets will need to be booked online and in advance with the special codes needed to obtain the free tickets being made available a few days before on the St David’s Day page. Proof of address will still be needed when you check-in.

Included in the events programme are ‘specials’ to celebrate the half-centenary of the Bala Lake Railway, firstly ‘Bala at 50’ over the May Day Bank Holiday weekend at the end of April / start of May. To commemorate the running of our first trains our '50th Anniversary' event will take place on the 13th August. The final event scheduled to celebrate our 50 years will be our '50th Anniversary - Steam Gala' over the August Bank Holiday weekend. 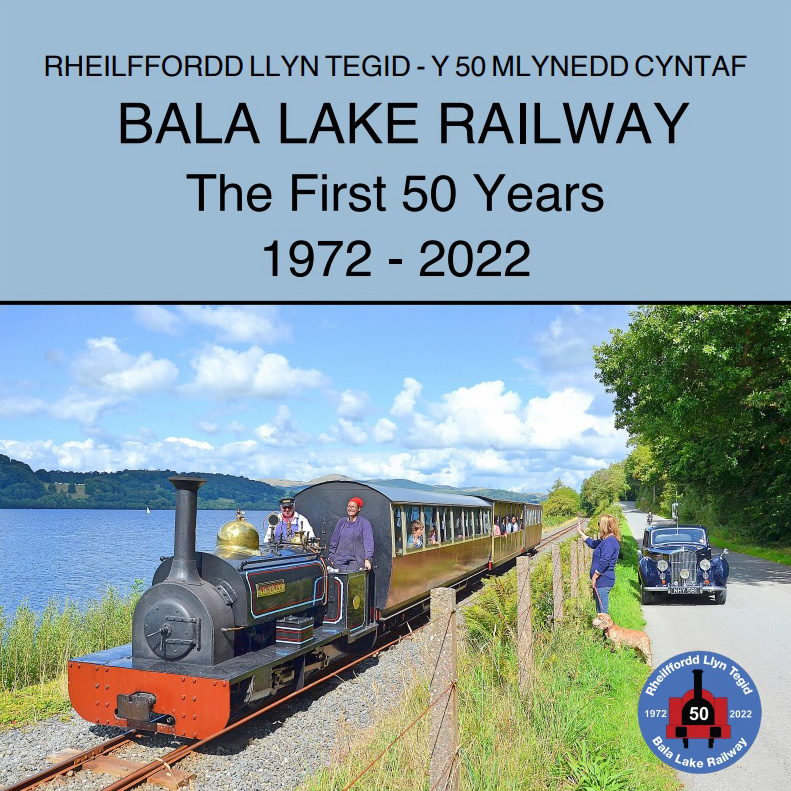 To accompany these celebrations a new book entitled 'Bala Lake Railway - The First 50 Years 1972 - 2022' is being produced and is currently nearing publication. This writer has been given a sneak preview and it will prove to be a very well-received work, being beautifully written and featuring a veritable plethora of period photographs from the extensive BLR archive ranging from the days of standard gauge rails in the region to the present day including copious information about how the present-day line came into being. We will be reviewing this exciting new tome on publication.

All of our other special events are listed on the BLR website, all twelve of them, with details about how to book tickets which is still essential at the moment because of the continuing Covid restrictions. However, this will not stop our unique events taking place such as the yearly ‘Race the Train’ competition where paddle-boarders are taken from Llanuwchllyn to Pentrepiod where they set off and try to reach the Bala Sailing Club near the eastern end of the line. Many suppose that it would be a one-sided affair but it is never a foregone conclusion, is perennially hilarious and very noisy with support for the boarders almost, on occasions, drowning out the sounds of the train.

Another welcomed return to the schedule of events will be (Covid permitting) the 'Great Little Trains Model Railway Show' at the end of September. It will be refreshing to welcome back to Bala the many excellent layouts and trade stands that, in the past, have loyally come from all over the UK and indeed Ireland. The show takes place at the main school in Bala and has always been very well attended. Fingers crossed.

As you will see, it is going to be quite a year!

Click here for further information on all of the 'Special Events' planned for 2022.

Holy War and Alice are still in pieces, both enjoying a ten-year strip-down with Alice to receive her new boiler. These works are not exactly high priority when there is still much to do on rolling stock and track-work before the season opens. But there is some good progress to report as both Holy War and Alice's steam manifolds are now complete thanks to the efforts of volunteer Mike Hayward. The photo below shows Holy War's manifold ready for refitting. 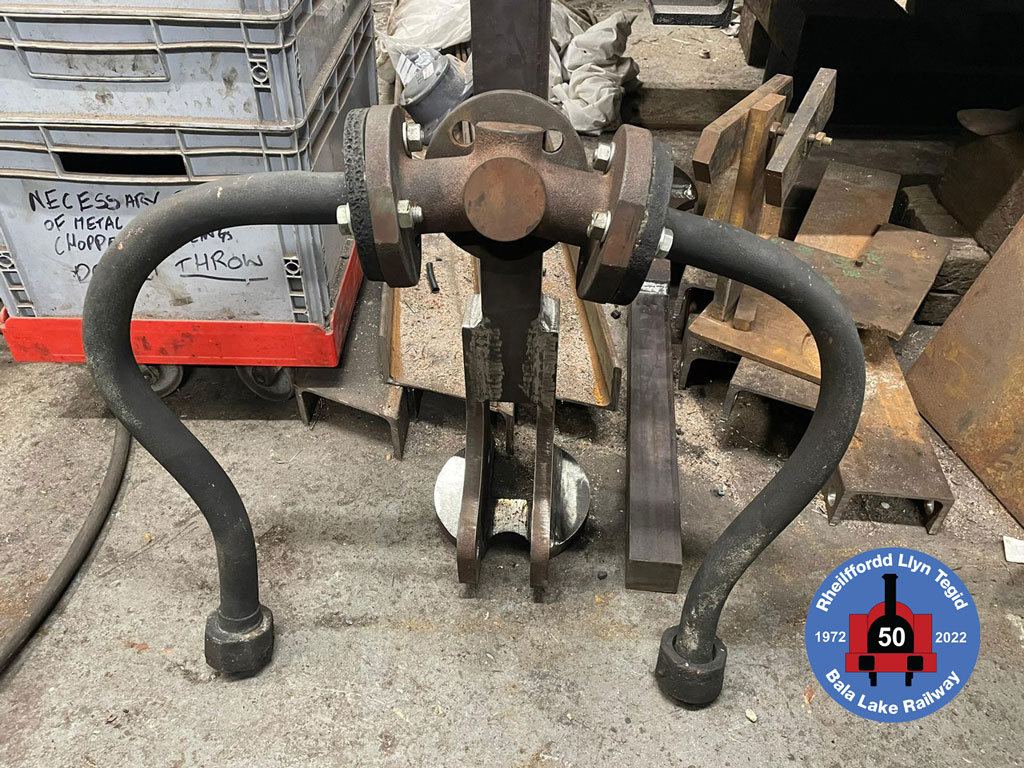 What is more important is continuing the programme of carriage renovations and track improvements. The culvert work at the eastern end of the line has been duly completed and the track that was lifted has been re-laid with the ballast ploughed back into place using our ingenious home-crafted ploughs towed behind either a tractor (for removal) or a diesel loco (for re-instatement). Our short video does the work of many words.

83 sleepers were replaced between the end of the yard at Llanuwchllyn and the crossing half way down Dolfawr Bank. To quote General Manager David Jones, such was the enthusiasm of the Weekend Gang that five more sleepers, which were still spare on the wagon, were duly installed near Dolfawr crossing.

With regards to general maintenance work, David Jones takes up the story:

There was further progress on the new carriage no. 4 with the floor given its third and final coat of paint. Carriage no. 2 (the wooden guard’s one) had its floor removed and while this was out, new steel strips were added to the underframe so that the air tanks, which have been cleaned and repainted, can be attached more securely rather than to the floor. Other frame members were primed and painted. Carriage no. 8 was given a thorough clean top to bottom inside and the floor given two coats of paint. Carriage no. 1’s new bogies had their bearing pads fitted. Nothing is being overlooked.

On the loco front, George B and Maid Marian had their handrails and cab edges primed and repainted, and a start was made on re-assembling them and Winifred after their boiler examinations.

On top of all this, the potholes in the yard have been filled and flattened. This all goes to show what can be achieved with the enthusiasm of eight volunteers and three staff!

At the end of the month, a most important aspect of track maintenance took place, that being the ‘re-gapping’ and greasing of fishplates. Expansion during the hot days of summer can cause occasional problems with rail distortion which can mean, in extremis, a train cancellation, the section along the unshaded Dolfawr Bank to Pentrepiod being the most prevalent. Again, a small group of volunteers leaped into action and the messy task was successfully completed – another bit of yearly maintenance out of the way.

Lastly, the signal box at Llanuwchllyn has been having some serious maintenance with new steps and framework plus window frame replacement. Our photo shows that the job making good progress which will delight our signalmen who have had to lean out at precarious angles for the last few months. Resplendent in deep red and cream, they are a credit to our maintenance team. 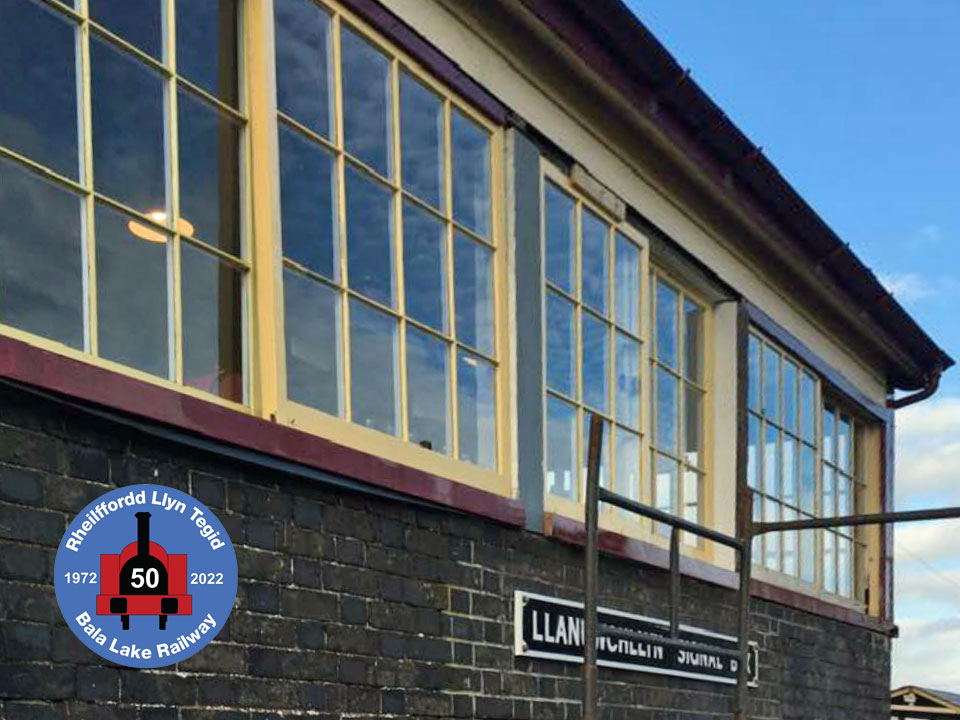 And finally……. while the ballast ploughing was taking place, our Chief Engineer’s faithful pooch, Max, accompanied his master as always and on trips down the line, he never misses a chance to swim in the lake. Max also has the remarkable ability of nodding off in some unusual places, this time in the noisy and uncomfortable cab of our diesel loco, Bob Davies, aka ‘Trigger’. We therefore include Rob’s photo of some canine power-napping! 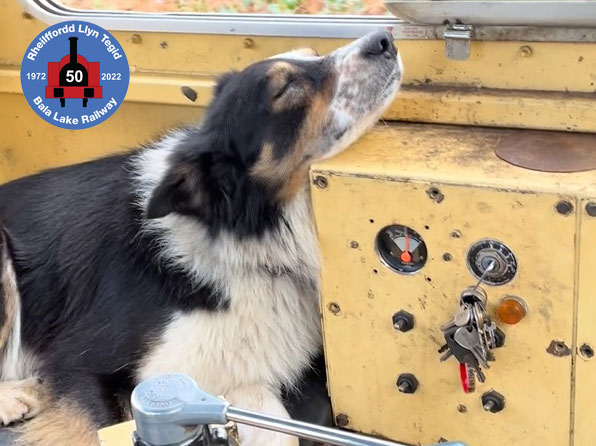