Three storms arrived in five days during February. The first, Dudley, arrived on the 16th just as final preparations were being carried out for the half-term running on the railway. The rain was nigh-on horizontal during the day but this did nothing to thwart the determination of all to get things ready for the first trains of the season the following day. Maid Marian was aroused from her slumbers and was decidedly sleepy, such was the time needed to get some warmth into her dozy boiler. Volunteers in the station café were busy with last-minute preparations while outside, discarded items such as superfluous and unsightly equipment were removed. Anyone working outside became quickly soaked but the prevailing attitude was; “Rain? Just ignore it”. 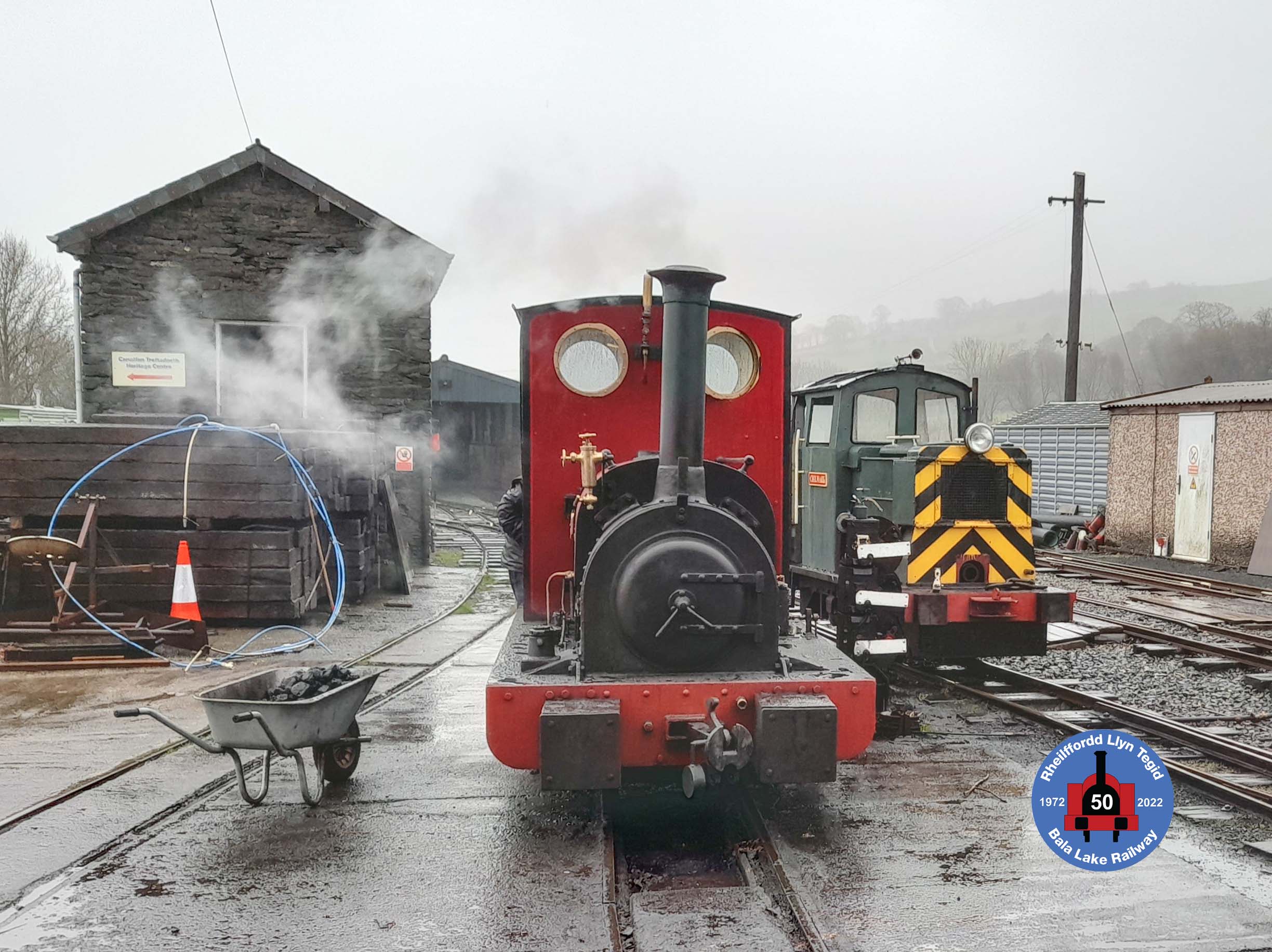 Ironically, the next day was a complete contrast to Dudley with fine weather to greet the first passengers of the year. Three trains were scheduled and the first two were full, with the last one almost, a most encouraging result. 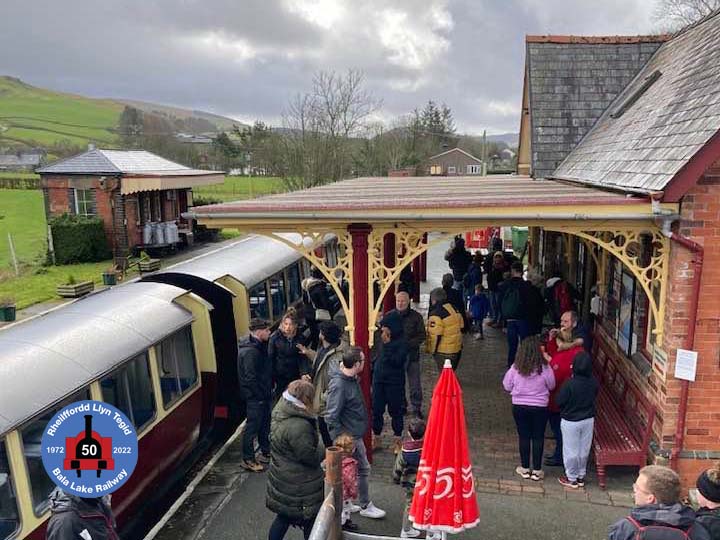 On the Friday, storm Eunice arrived although the consequences in North Wales were much less than along the south coast where trees by the score were left lying in the road until the chain-saw teams arrived. By the time storm Franklin arrived a day or two later, just in time for the first full week of running, even the usually resilient management was compelled to cancel one day on safety grounds, such were the wind speeds.

General Manager David Jones captured the atmosphere in his inspirational manner at the end of the month.

As I write this, Llanuwchllyn is bathed in winter sunshine, albeit backed by a cold wind, and the last train of half-term is about to depart. We are finishing as we started, very much on a high, but the week in between has been variable to say the least. We have had wind, rain, sleet, snow, hail and sunshine wrapped up in three storms, one of which forced us to close for a day due to the strength of the winds although, thankfully, no damage was caused and we had quite a few happy travellers. Many people have commented on how good the railway looks which is down to the hard work of the staff and volunteers over the winter. Our next trains are not scheduled to run until the beginning of April which means we have the whole of March to complete the remaining winter maintenance.

The February Working Weekend and Wednesday Gang activities were directed towards the foliage issues, at which the volunteers excel – and in all weathers as the photo shows. Rain, gales, pestilence – they get the job done and still come back smiling! 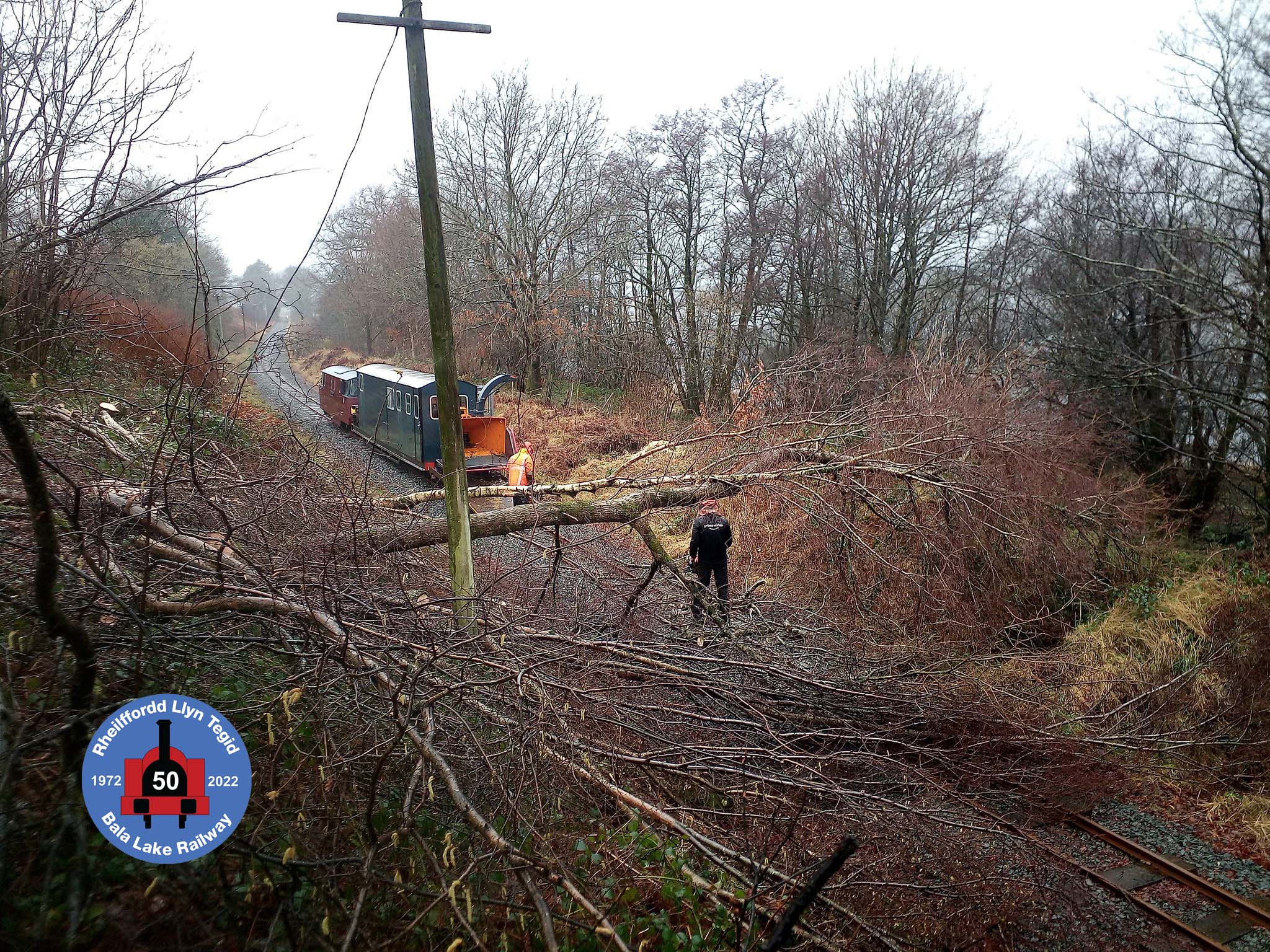 Earlier in the month, the pair of tamping machines (christened Rob and Dan in honour of our engineering team) was put to work over the section in Llangower cutting which, if you recall, was re-laid in November, with Dan (both man and machine) tamping one rail and Rob (again both man and machine) the other, in the process firming the support under the sleepers and setting both the longitudinal line and the cross-levels. A final check of the measurements was made by the General Manager (himself a highly qualified engineer) who was greatly impressed with the quality of work and, although the line was re-opened with the usual cautionary speed restriction to allow settlement under traffic, the standard was such that the train crews reported that it was as good as, if not better than, other more established parts of the line.

On the locomotive front, work progresses in the background on Holy War and Alice while our trusty diesel ‘yard goat’ (that strange North American term for a shunter) Bob Davies, aka ‘Trigger’, has been admitted to the shed for some loving attention, meaning that Chilmark has assumed the mantle of main shunter. Indeed, as the photo shows, she was used for some bonus double-heading on one service which delighted visitors as the combination of diesel/steam is a real rarity. 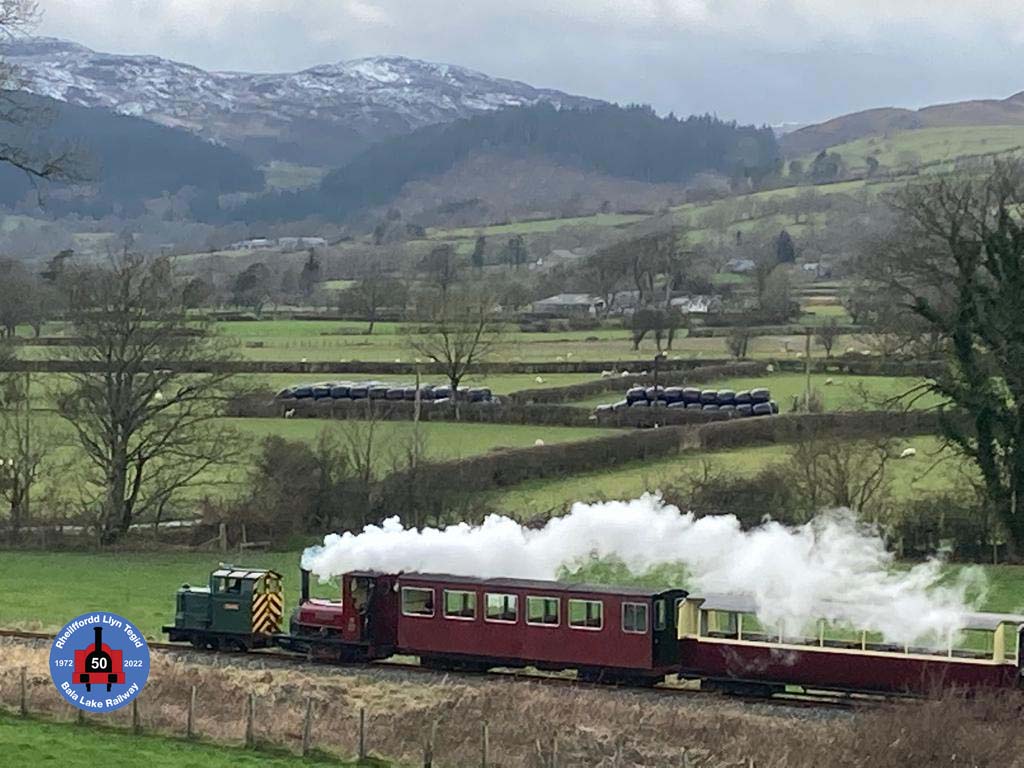 ‘Trigger’  is used every day throughout the season so it was decided to attend to items before the season started in earnest. As per Rob Houghton’s photos, new brake blocks were fitted as well as new drive chain gear, a new/refurbished air compressor is to be installed and the loco given a deep clean plus a good inspection all over. 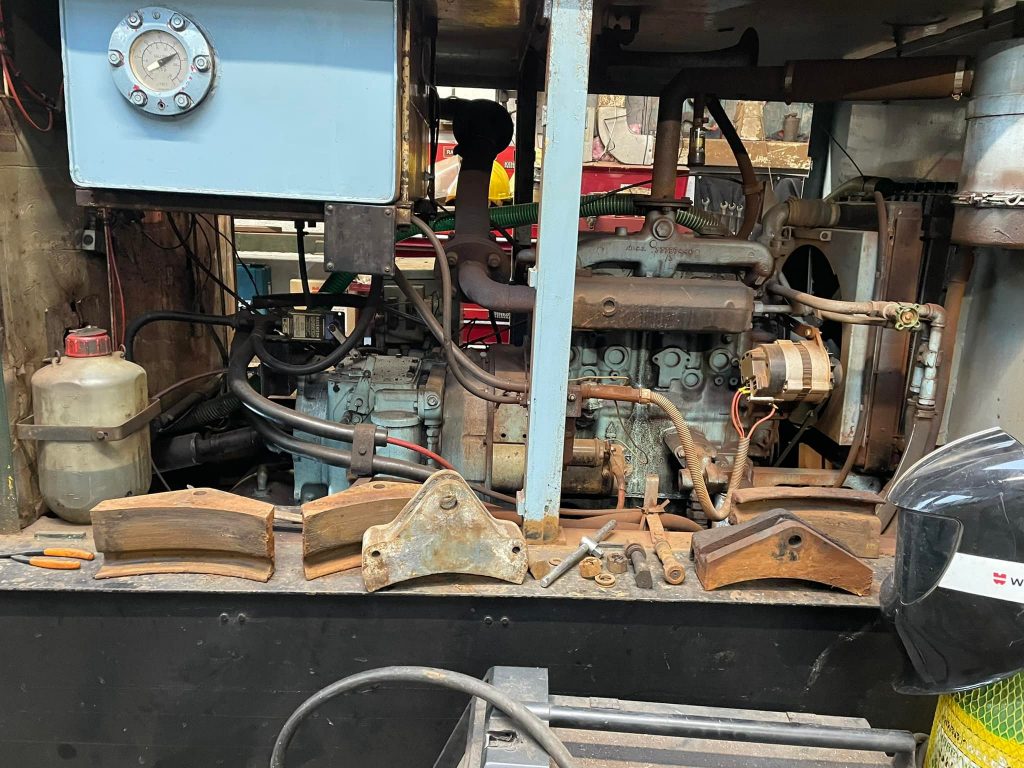 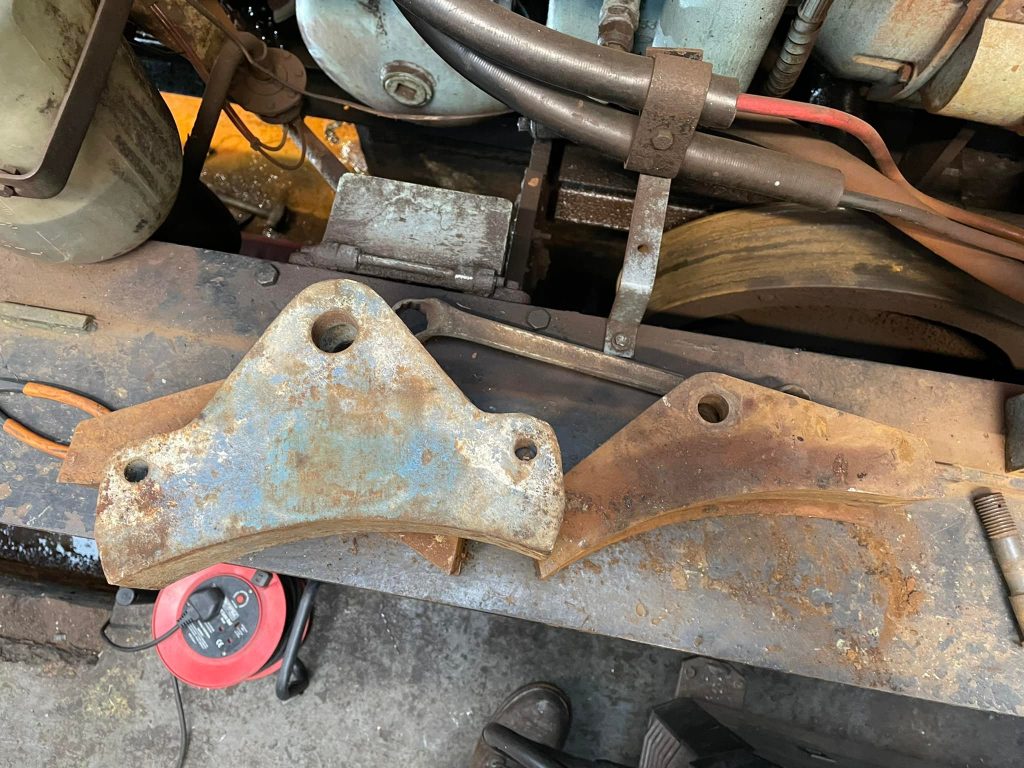 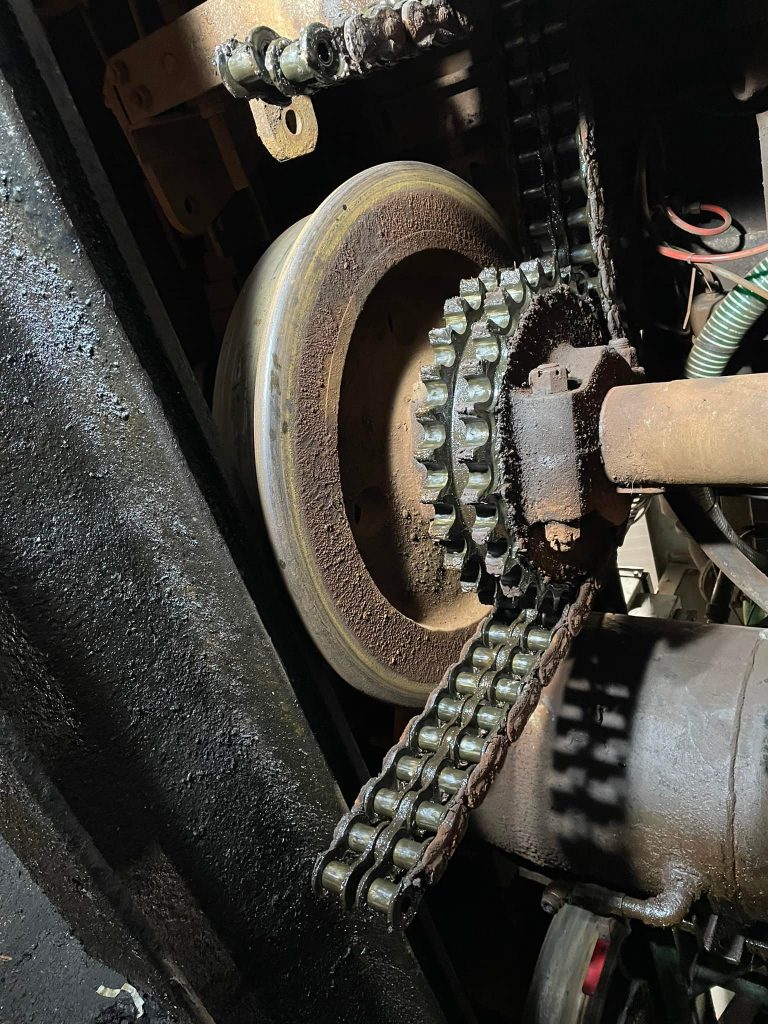 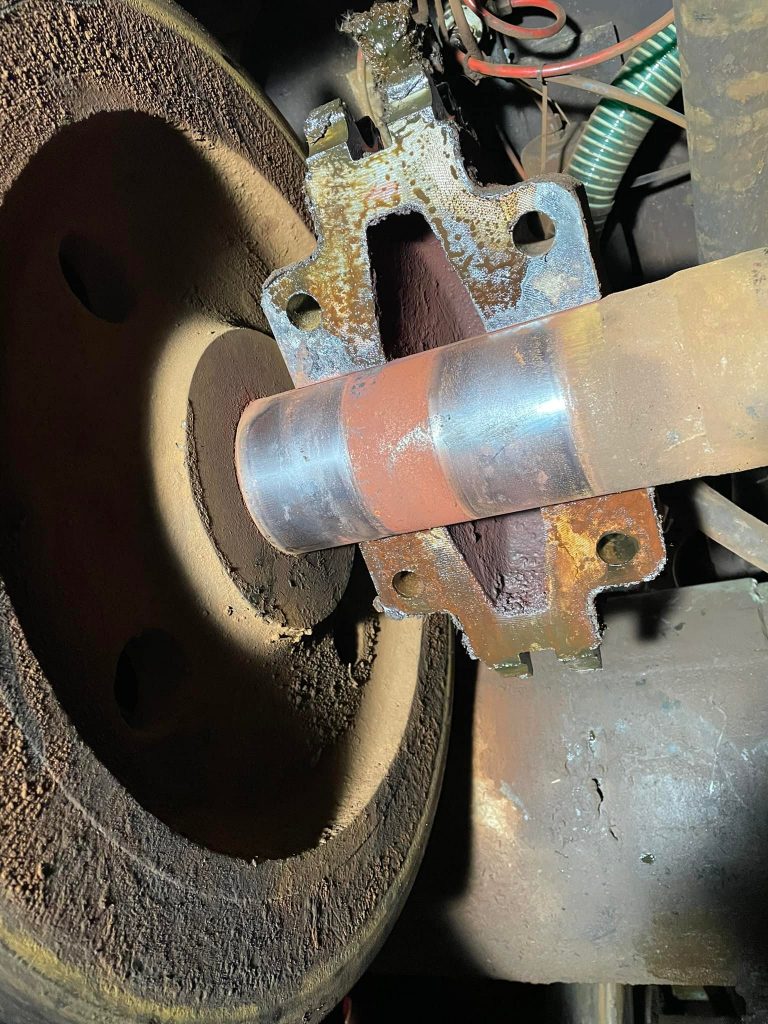 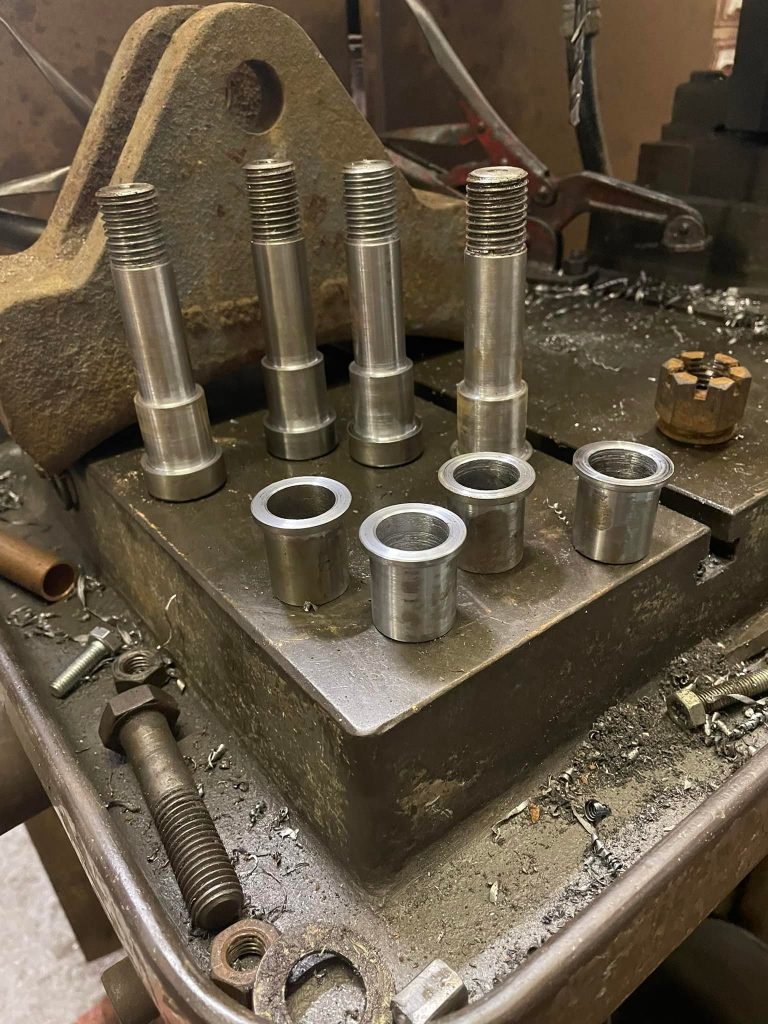 While on the topic of locomotives, we have not recently mentioned any activity on the Avonside which is undergoing a total rebuild. To this end, owner John Moorhouse sent a most detailed account of what he has been up to in the recent weeks, including news on the new boiler being constructed locally. John takes up the story;

Progress continues at a steady pace and the frames are now getting close to completion apart from a final clean and painting. To recap, the following has now been completed. Both cylinders have been re-bored and are now fitted back on to the frames. The original and rather corroded large plate that fits behind the front buffer beam and between the frames giving significant strength to the cylinder area has been replaced. The rear buffer beam that has a major bow in the coupling area and had received a heavy impact behind the driver causing a significant twist has also been replaced. Dome headed bolts, manufactured in-house for 90p each (stockist cost £9 each!!) have been used instead of rivets. After much persuasion and frustration, the brake cross shaft under the cab was finally extricated to allow the ends to be machined for new bearings and this is now ready for refitting. The cylinder drain cock actuating linkage has been repaired and is back in place. Now that the ancillary equipment has been replaced or overhauled, the new running plate and cab floor can be painted and finally installed.

Once access can be gained to the large lathe in the BLR loco workshop, it is hoped to re-profile the tyres and skim the wheel set journals in readiness for the return of the frames later this summer.

A visit to Berwyn Boilers recently found good progress being made with the new boiler and the majority of the material is now in stock. The boiler barrel has been rolled to precisely fit the forged back-head and throat plate. Also, the barrel has been accurately marked up in preparation for cutting to allow the installation of the outer firebox side plates and the welding on the mounting pads for the numerous boiler fittings.

This is progress indeed and we look forward to further news later in the year. 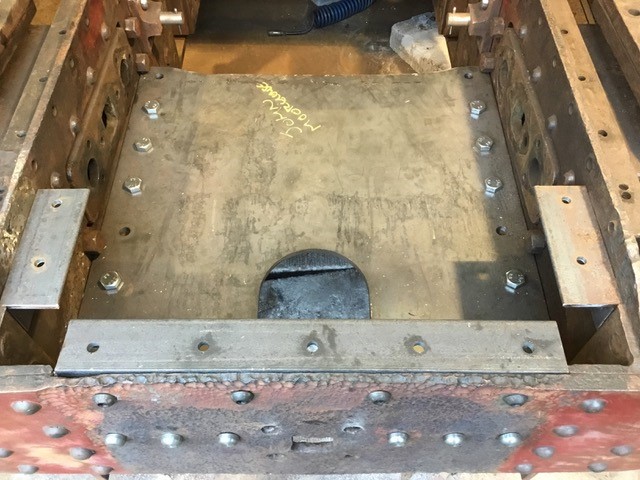 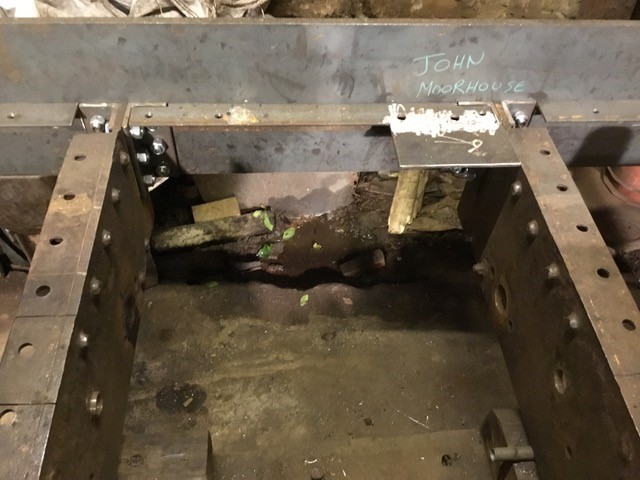 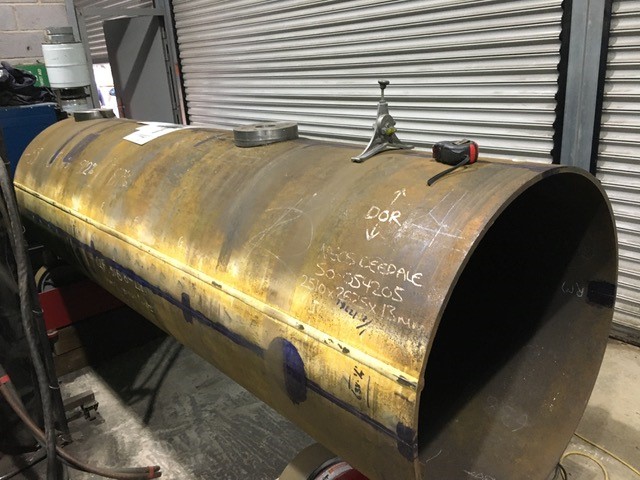 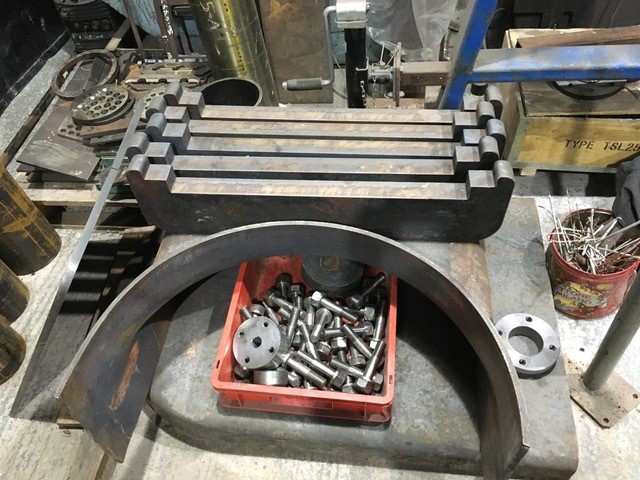 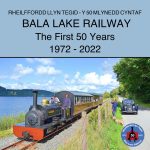 As well as announcing the imminent publication of Bala Lake Railway / The First 50 Years / 1972 - 2022, our new book to coincide with the celebrations of the railway’s 50th Anniversary, we are also able to bring you some more information this month regarding our ‘Bala at 50’ event that is being held from the 30th of April to the 2nd of May.

We are delighted to reveal that the visiting loco for ‘Bala at 50’ harks back to a type that used to be based on our line. We are honoured to be welcoming Jennie from the Amerton Railway, she was built by Hunslet at the works at Statfold near Tamworth and was completed in 2008. She is almost an exact copy of the original design, the last one of which was built in 1941 by the original Hunslet Company in Leeds which had taken over the goodwill of Kerr Stuart in 1930. 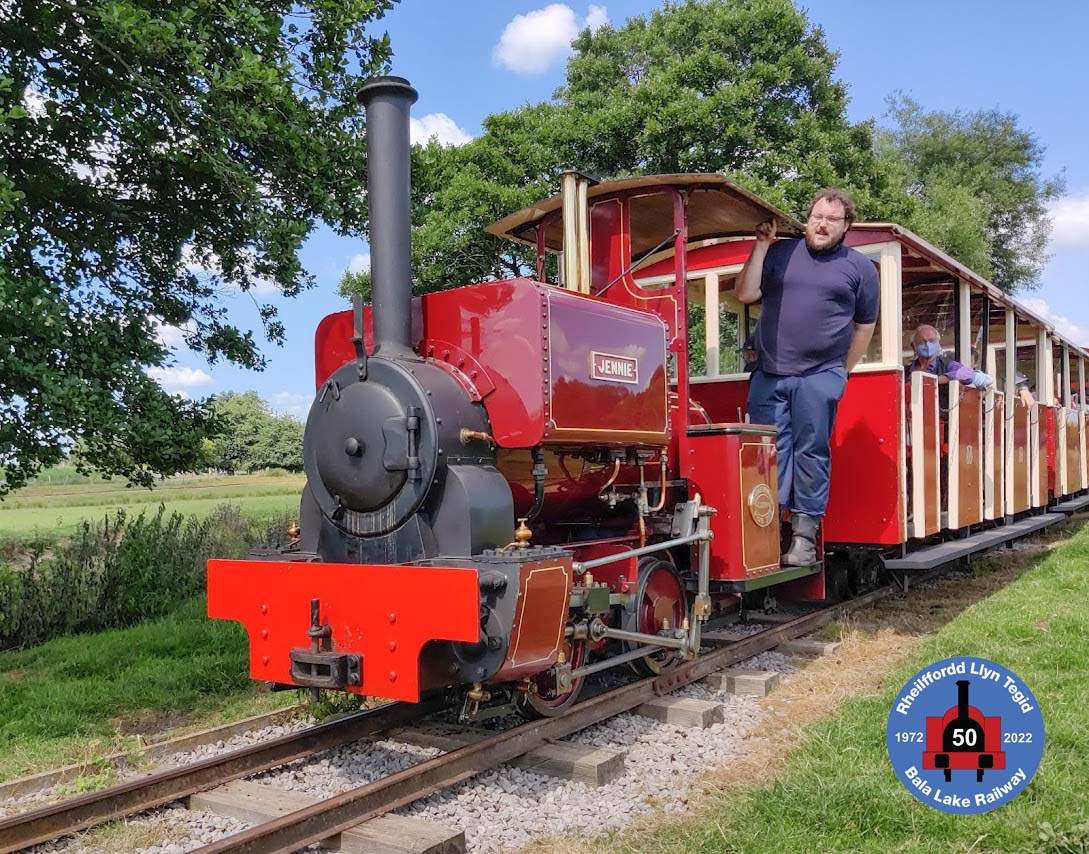 For those who remember, or are unaware, there was a Kerr Stuart ‘Wren’ Class (Works Number 3114) based on our railway in its earlier years. She was named Dryw Bach, although her name plates were never fitted because of a boiler failure which meant that the loco had to be withdrawn. She previously worked around Fallgate on the Ashover Light Railway in Derbyshire and is now based at the Vale of Rheidol Railway but currently out of service. Incidentally, both name plates are in Llanuwchllyn, one of which is proudly displayed in the BLR Heritage Centre.

While the BLR website features the full list of events and galas scheduled this year, the BLR take its message to other locations and we will have a stand at the ‘Last Days of Penrhyn Steam’ event at Statfold Barn on the 19th-20th March. The 14th May will see us at the Llangollen Garden Railway Show as well as the Crewe Transport fair on the 25th June. Finally (for the time being), the BLR will have a stand at the Warley Model Show on the 26th/27th November. These stands get the message across and are staffed by volunteers who are always greatly appreciated.

The award-winning Heritage Centre at Llanuwchllyn is justifiably proud of its collection of locos, rolling stock and artefacts relating to the Welsh Slate Industry, all displayed in our light, airy building. While most exhibits are concerned with two foot gauge items, we are keen to show that there were other gauges involved in the production of slate and Francis Stapleton, one of our knowledgeable curators, describes three exhibits resting on their own bespoke piece of track.

The Heritage Centre’s three 3ft 6in Pen yr Orsedd quarry waggons have now been placed on rails outside the Heritage Centre on public display. On the left is the slate waggon no. 8 used for finished roof slates. The middle waggon is the works ‘flat’, used to move anything heavy, including locomotives around the works. On the right is the oil drum waggon for moving oil drums around the quarry, including up and down the inclines. Interestingly, the Nantlle Tramway, where these waggons were used, did not own any waggons which were owned by the quarries which paid tolls for track usage. 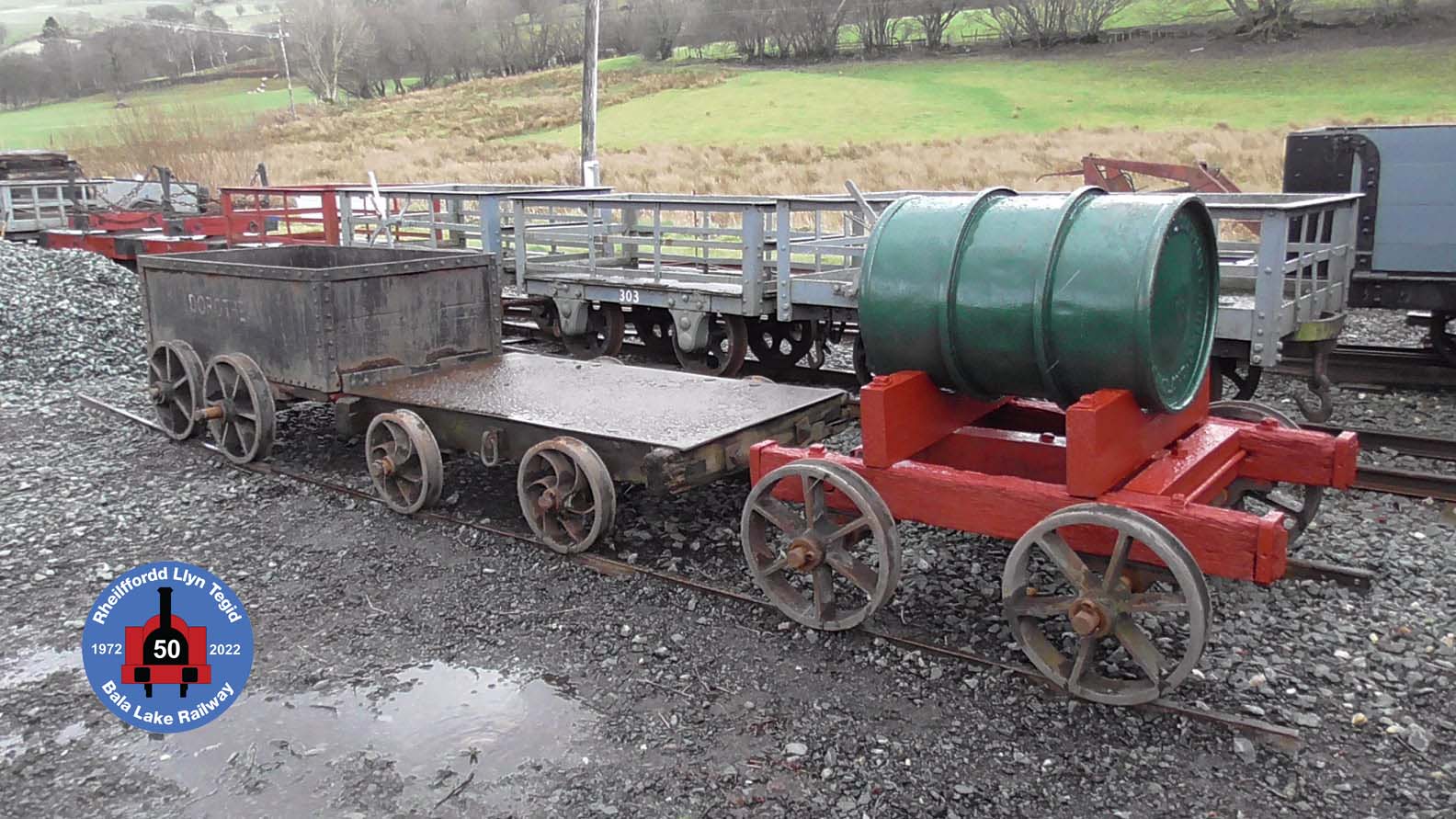 And finally…… we unashamedly show another delightful photo of Max, our Chief Engineer’s pooch, a real railway dog, in somnolent pose in one of his more strange choices of location! At least it was out of the rain.