As anyone involved with railways will know only too well, the winter season is one of great and varied activity behind the scenes, as well as preparations for the start of passenger services, this year coinciding with half term in mid-February. What follows will give a flavour of the huge amount of work already done, and to be carried out, by an intrepid band which never fails to tackle jobs with enthusiasm and humour (plus tea and flapjacks).

The building of the Carriage Shed Extension, kindly funded by the Heritage Lottery Fund, is now complete, and regular readers will note the progress from previous photos to the present. Having our rolling stock under cover and protected at both ends by sturdy doors will be a boon, not only to existing items but also to those to arrive in the future, including the Penrhyn Coach, progress on which we frequently comment. 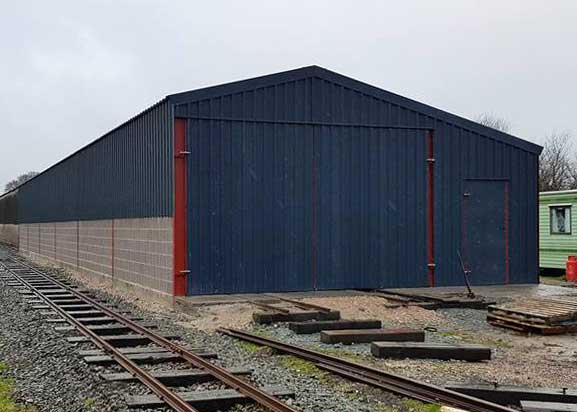 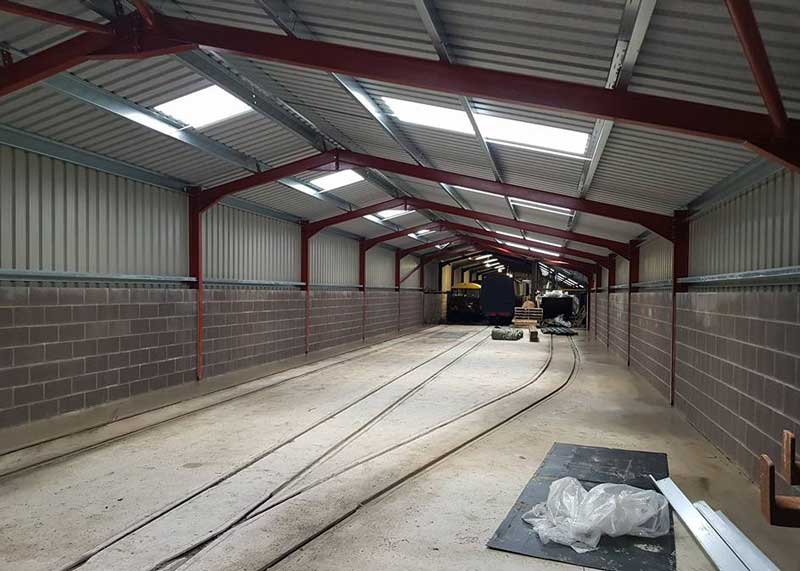 Progress on the Penrhyn Coach continues well, in spite of the cramped conditions and winter weather. David Hale reports that the two part-made doors, each featuring 29 individual parts, are being varnished before final assembly. Comment should be made that each door weighs 38kg, hence movement requires extreme care and patience. David can just manage a door on his own! The latest news is that one door is now mounted and the outside still needs a coat of primer. The windows are to be fitted but the liners need to be cut and secured. The situation was not helped by the electricity supplier which needed to do maintenance at exactly the wrong moment. David’s second photo shows the door fitted with the strap and droplight which works exactly as planned (no surprise to us). The panel below the window will be sent to the local upholsterers, Pipers, for the leather panel under the window to be fitted, exactly as per the coach in the Penrhyn Museum on which this recreation is modelled. 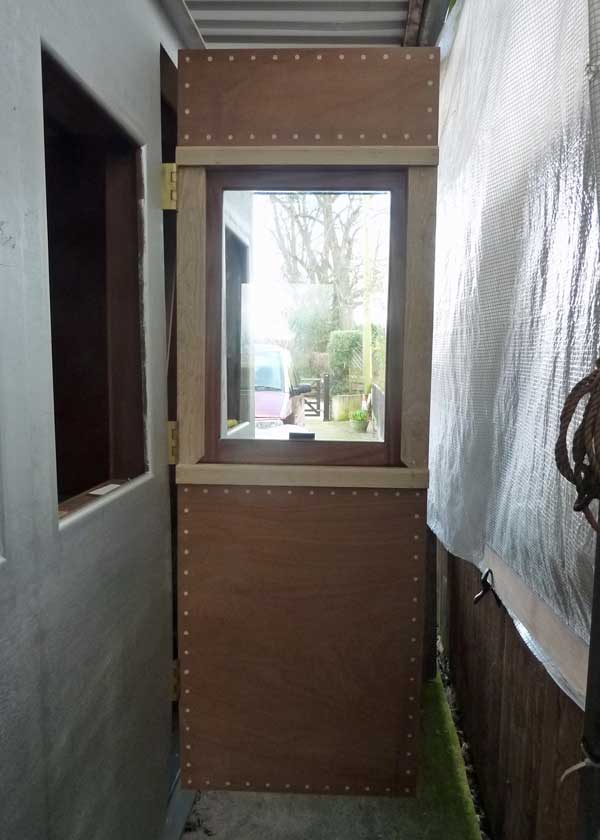 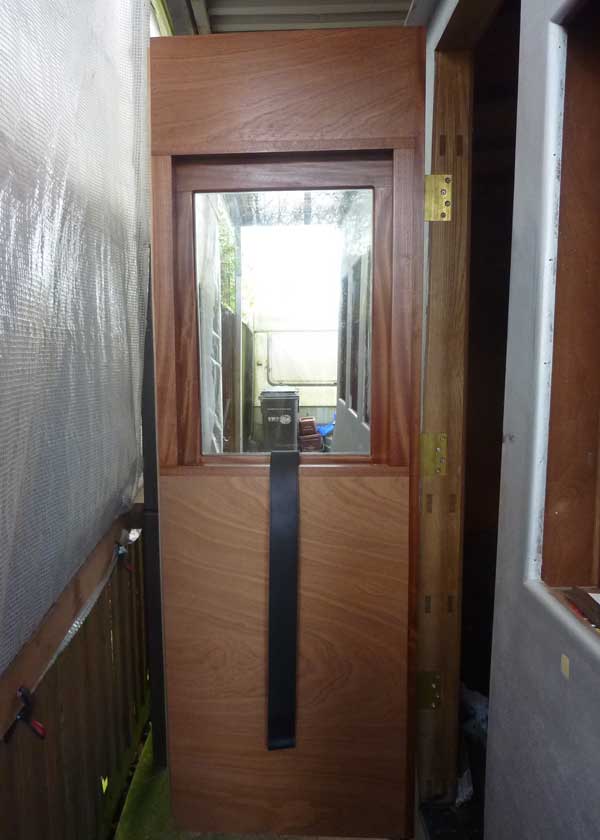 The Carriage & Wagon Department has done nothing on rolling stock since their refurbishment of the two heavy duty bogie wagons just before Christmas. BUT their talents have been put to great use elsewhere and the station café dining area has been completely refurbished under the leadership of Dan Laidlaw, with new panelling, furniture, paintwork and is now looking very smart indeed. On top of this major effort, improvements in the accommodation upstairs in the station have been done too, including new heaters and clothes hooks, little items but essential, and they have to be done. The team has also reinforced some of the beds, to counteract the effects of gravity on tired volunteers who sit down too hard! On the agenda for later will be a new station name board and hanging platform signs, plus fitting out our new ‘Interpretation Centre’, the new part of the carriage shed where visitors can inspect in safety (and dryness) our heritage rolling stock and inspect progress in other areas.

More major news this month features, firstly, more track relaying, this time continuing from where the team left off last year, and the section at the far end of the line over the cattle creep known as ‘Durrant’s Drop’, so named delightfully after a keen volunteer’s inadvertent tumble years ago down a bank.

The majority of the work took place over the first working weekend of the year in mid-January, when a large party gathered, keen no doubt to rectify post Xmas expansion. A quarter of a mile of track was carefully dismantled, rails moved aside for later re-fitting, plus all the sleepers lifted clear and stacked to one side, all on the first day! The next day, one group armed themselves with saws and attacked the growth of foliage along the track, while Dan and Rob started ploughing the ballast with their ingenious home-made implements attached to one of the vintage tractors that are always present at the railway. 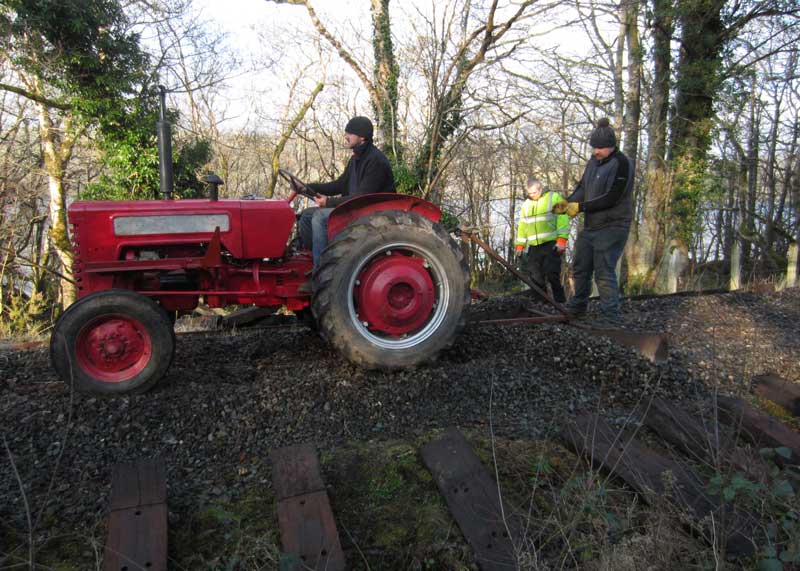 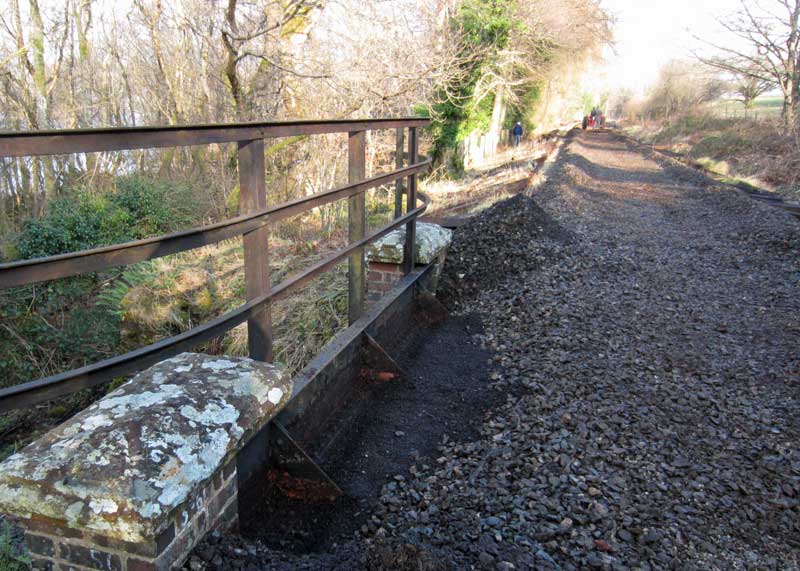 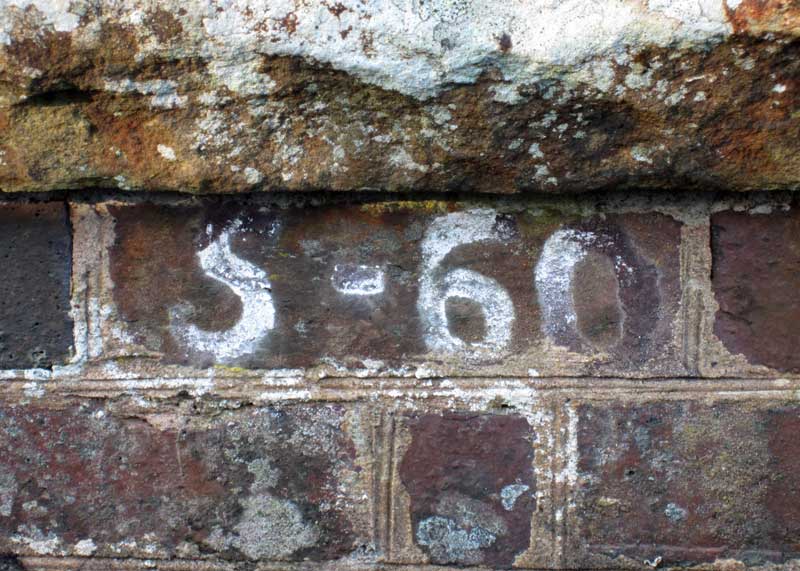 Durrant’s Drop bridge, an iron structure, was cleaned and prepared for painting, and it was noted that one of the stone abutments bore the numbers ‘3-60’, possibly indicating the last time the bridge was inspected under BR ownership. When the ballast ploughing has been done, James Milner made a couple of passes with the roller to ensure a perfectly smooth surface, and after the traditional tea and flapjacks, our large team then set about carefully laying new sleepers, from the batch we featured in last month’s news, after which the rails were positioned. 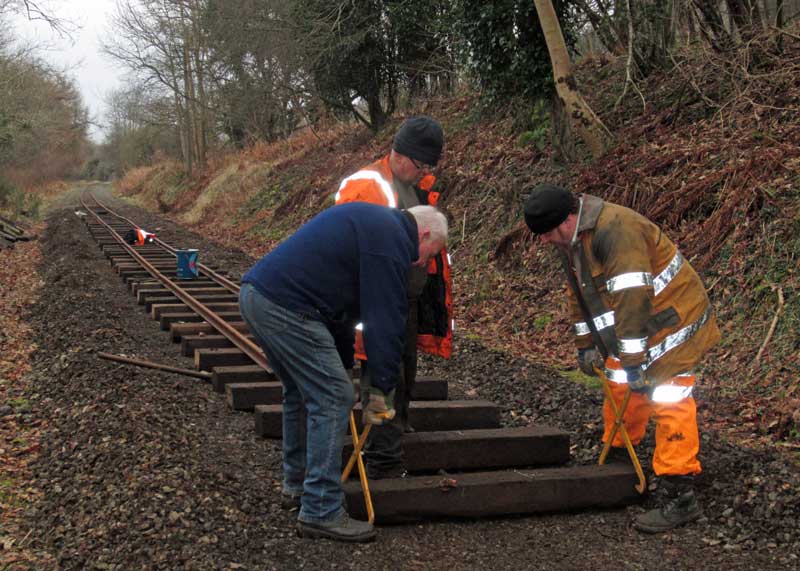 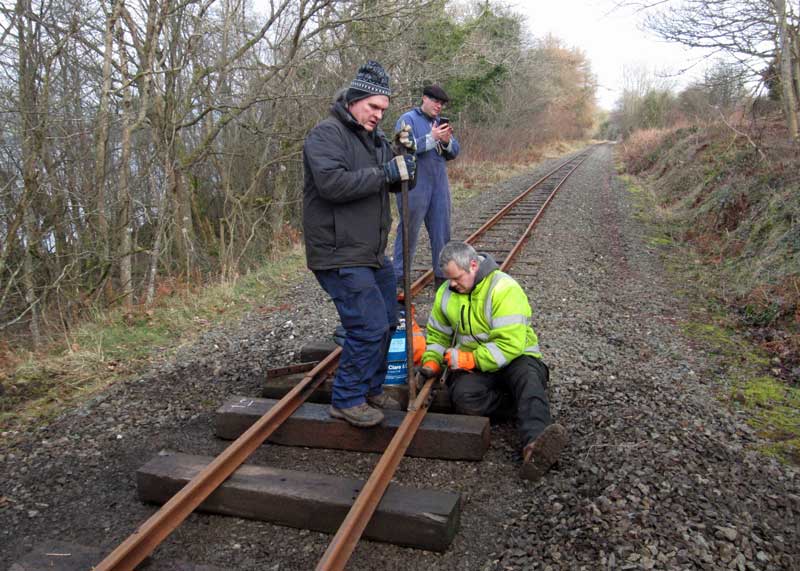 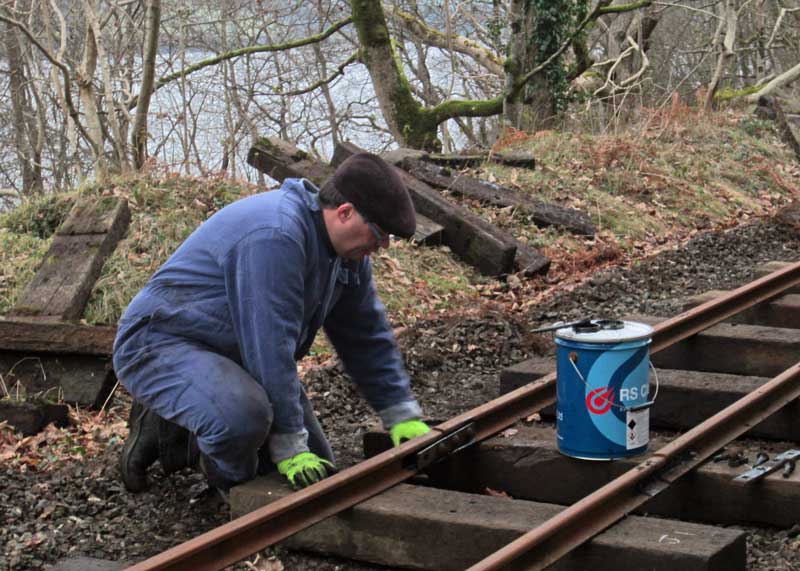 After more careful inspection, the laborious task of lubricating and bolting the fishplates in place was carried out. At the end of the day, eight lengths of track had been completely replaced, and much foliage had been removed which is always a great improvement benefiting passengers and loco crews alike, if not the varied wildlife which precedes and follows each train. Whilst the size of the gang diminished during the week, progress was nevertheless swift, and all 45 lengths were re-laid by Thursday afternoon, a great achievement.

Two Big News items concern the Red Dragon Project this month. Firstly, a new appeal was launched in December, and the response has been excellent, with the £10,000 figure being already passed. This appeal is to fund the construction of the extension track into Bala, and the appeal operates on a ‘donations and benefits-accrued’ basis, with Bronze, Silver and Gold categories, the goodies for which are really outstanding. Please check the website for further details. In addition, 4,000 leaflets have been printed and left in strategic locations such as the BLR station in Llanuwchllyn, and they were also handed out on the BLR stand at the Stafford Model Railway Exhibition at the beginning of February. For further Extension news updates, please go to the official website.http://www.balalakerailwaytrust.org.uk/

The second Extension news item involves the Bala station site and the vexed question of removing asbestos from the existing derelict building. Several rather excessive quotes had been obtained, but a local builder and a specialist asbestos contractor, both recommended by a new volunteer, between them came in with quotes that were significantly cheaper and far more realistic! The saving alone means that nearly enough has been saved so that the strip of land alongside the Bala Rugby Club can be purchased.

These two success stories illustrate exactly the atmosphere of enthusiasm and co-operation that we are finding in the whole area for our extension project. It was never ‘if’, but now it is definitely ‘when’.

Volunteers, that vital ingredient in all heritage railways, need not be just for the heavy and oily stuff. We need volunteers for every aspect of our operation and, indeed, we have just found a new volunteer to help with admin and paperwork, so there is enormous scope for talents to be shown. On that topic, please make a note of the 29th April, when we will be having another of our successful Volunteer Recruitment Days. These events show to all who are interested the huge variety of jobs that need doing, from locomotive cleaning to track maintenance to helping at Galas to – well the list is endless. However hard the task may be, you are among like-minded who want to achieve the same end and, apart from anything else, it is without fail enormous fun, however onerous the job or fickle the climate. Incidentally, we dismiss the latter under the heading of ‘liquid sunshine’.

And finally………. many may have picked up Rob Houghton’s post on Facebook about his intended serious ‘clean-up’ session, for which he needs help. This will cover giving the locomotive fleet a thorough polish, and the coaching stock is to be included if enough people can be found. Again, it will be fun and very productive. For further details, please liaise with Rob through his ‘page’, or contact the railway. All assistance will be gratefully received.

In conclusion, we feature a beautiful photo, taken by Dan Laidlaw, of the recent snow at Llanuwchllyn. For the railway, and Dan’s camera, this was definitely not ‘the wrong type of snow’. 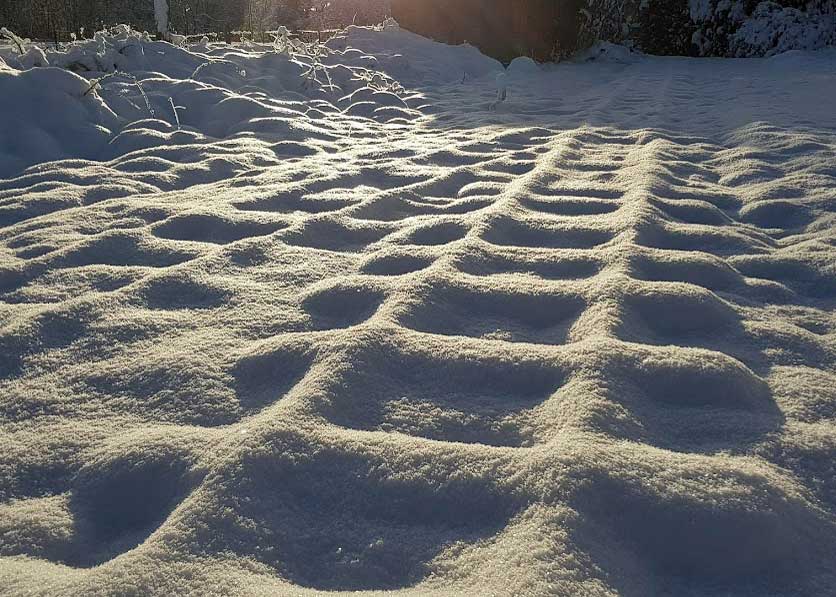