As we mentioned last month, the Easter break, being a moving feast from one year to the next, has a big impact on travelling numbers at the start of the season and makes planning even more difficult. An early Easter straddling the end of March and early April is never good news as it creates a perception that it is still winter and far too cold to go on holiday, although many hardy visitors were rewarded for their endeavours by travelling on the line in crisp snow, a magical rarity. This year perception bore a huge similarity to reality, but even so the railway enjoyed a reasonably busy Easter period, and whilst numbers for April were lower than last year, (when the railway enjoyed a bumper late warm Easter) the figures for the year to date are still better than expected.

Saturday 7th April saw a race with a difference on the railway, possibly unique in the world of railway heritage. Having a lake on the doorstep, so to speak, inspired the ‘Beat the Train – Paddle-Board Race’.

The train started at Llanuwchllyn and met the paddle-boarders at the delightfully minimalist halt at Pentrepiod (it vies for the title of the shortest platform in the UK) which is situated at the western end of the lake. With the paddle-boarders at the ready and supporters aboard the train, the locomotive’s whistle was the starting signal and the two modes of transport set off. In the interests of sporting chivalry, the train made its way slowly to Llangower Halt, all the while with the accompanying vocal encouragement from supporters on the train, and then halted, not only for signals but also for the paddle-boarders to catch up. 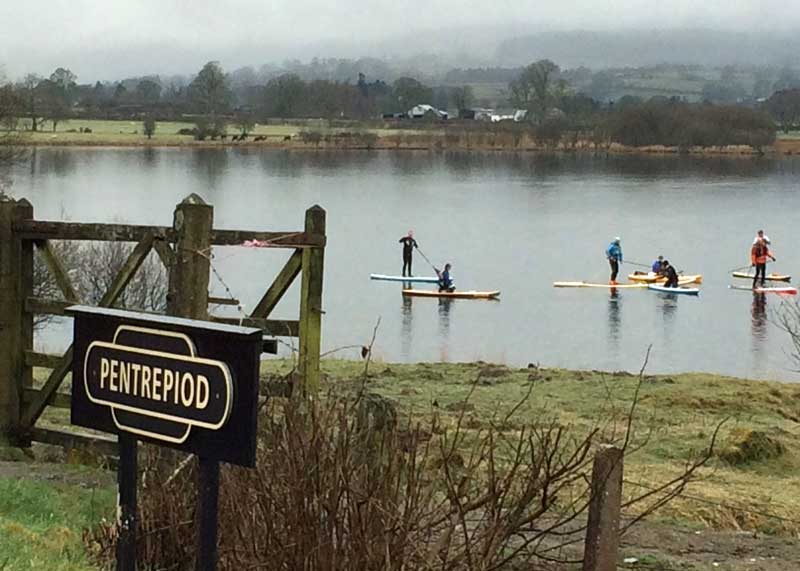 There was another halt at what is known as the ‘sea wall’, the wonderful stretch of line that runs along the edge of the lake, after which it became a serious race to the finish at the sailing club at the eastern end of the lake, with the train becoming a moving (and noisier) spectator platform. Once the train arrived at Bala, it was a sprint for one of the train crew from the station to the sailing club, the two locations not exactly being close to each other, and it turned out to be a very close finish, the train having to keep within speed and safety restrictions. The first paddle-boarder arrived just as the railway’s representative put a toe in the water, and in the interests of competitive sportsmanship, the race was declared a dead-heat, the main prize being that everyone had enjoyed themselves enormously, the paddle-boarders probably increased their fitness and several supporters on the train became hoarse. We look forward to the next race.

At the end of April, the BLR hosted the third Volunteer Recruitment Day, organised by Russell Prince and his team. He reports;

Participants had already registered their interest in advance and the day finally arrived for them to try out anything and everything that appealed to them.

With an atmosphere of eager anticipation, the day started at 9am with a ‘meet and greet’, plus the necessary safety briefing and medical form. Participants were then allocated into teams along with an itinerary of what the day held in store. The main aim of the day was to allow everyone to get a real feel for most aspects of what can be done as part of the operation and maintenance of the railway.

During the day, participants went out on the footplate of a service train and also travelled with the guard to see how the ‘other end’ works. They also rode on the footplate of the other loco in steam around the station limits of Llanuwchllyn as well as operating signals in the station box which gave them the chance to understand what each signal does. There was also the opportunity to get their hands dirty by helping to replace a few old sleepers along the coal siding.

For the last train of the day, the service was ‘top ‘n tailed’, hence more footplate rides and experience, after which there was a feedback and debrief session. Feedback was good, with all saying that the day had worked very well and had allowed them to get the most out of what was on offer, with a good appreciation of the varied duties and tasks involved. Hopefully, all will return as volunteers soon. 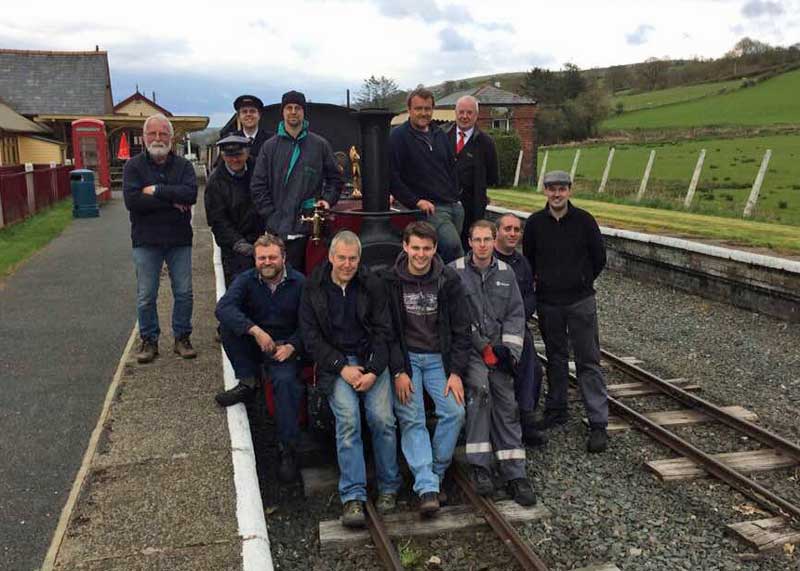 As a final comment, two of the group have already signed as serious volunteers and have booked their first group of working dates.

Our locomotives continue to provide serious service, and the news this month is the progress on the new water tank and cab back panel for Maid Marian. The photographs show what the engineering team has been up to, and we look forward to seeing Maid Marian back on duty soon. If nothing else, her reinstated full cab with be popular with crews during the occasional unfortunate conditions sometimes experienced. 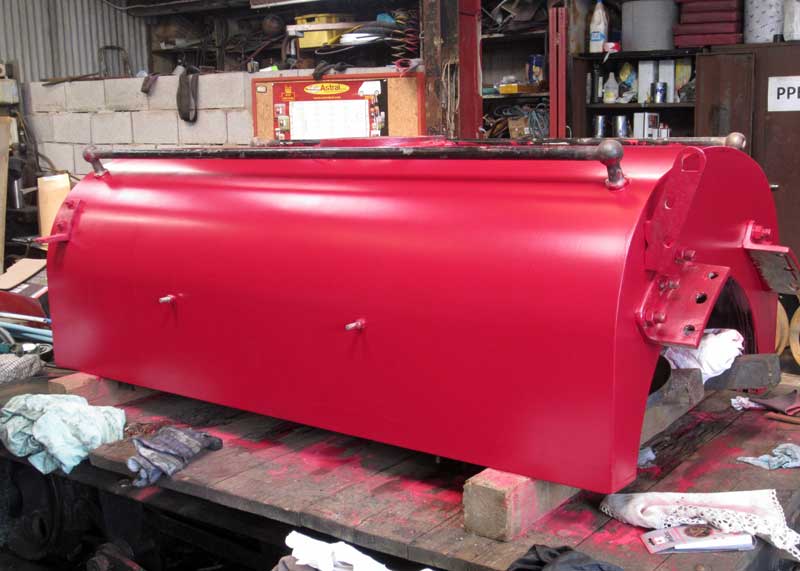 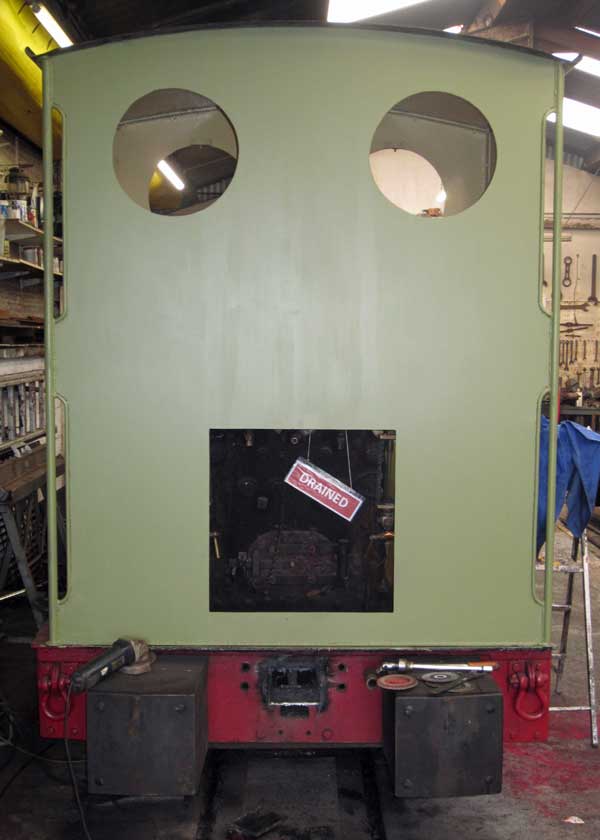 Major events are coming up thick and fast. At the end of May, the 26th to 28th will feature not only increased running on the line but it will be the annual BLR Great Little Trains Model Railway Exhibition held at Bala School. In years past, the variety of narrow gauge layouts on display has been a huge draw for visitors of all ages, and this year promises to be even better with at least 30 layouts, 20 of which will feature narrow-gauge. There will be, as always, a free heritage bus transfer from the school to Bala Station, particularly as parking at Llanuwchllyn may be the preferred option, thereby giving visitors the best of all worlds. A two train timetable will mean that waiting time will be minimal, and Llanuwchllyn station is such a great environment in which to relax.

At the same time, the 27th and 28th will feature the annual Bala Lake Festival of Transport in the large field next to Llanuwchllyn Station, this show being organised entirely by the Meirionnydd NVTEC Tractor Club, and any enquiries about entries or whatever should be addressed to Allen Main on 01678-530408. As in years gone by, this promises to be a wonderful gathering of varied machinery, trucks, tractors, cars, country crafts and everything in between, with the added bonus of loads of nostalgia and interesting aromas.

As always with these events, we greatly appreciate any assistance from volunteers, thus if you would like to help with the Model Railway Show, please get in contact with David Jones at the BLR on 01678-540666. The enthusiasm always flows and even helping in the canteen, as this writer has done, is enormous fun as you are dealing with like-minded people.

Dates for next month are, firstly, 16th to 18th Junewhere the dates of our annual Steam Gala have actually moved to tie in with the Ffestiniog Railway. Our theme this year will be the Penrhyn Quarry and will feature our own Winifred, as well as visiting ex-Penrhyn engines Hugh Napier and Gwynedd, the latter being a twin to Winifred, as well as the pair being two of the three Port Class engines from the Penrhyn Quarry, to be re-united here for the first time since they left the quarry in the 1960s. There will be a busy timetable of passenger and demonstration freight trains, plus other attractions to be planned in the meantime, as well as, we hope, another loco with Penrhyn connections. Watch this space.

Following straight on from the Penrhyn Gala will be two more periods of furious activity on the 19th to 21st June and the 23rd/24th June where visiting engines will be taking over on the regular services while all our resident locos are ‘going on holiday’ to the Ffestiniog to take part in their Hunslet 125 Gala. Gwynedd is the scheduled motive power for the first couple of days, before we welcome the Ffestiniog’s famous Palmerston, a George England built 0-4-0ST and tender. We stand to be corrected but believe this will be the first time that a tender engine has operated services on the BLR (Tender engines were of course a common sight on the route in its previous existence). Please make a note of these important dates as these events again demonstrate the co-operation between other railways in the area. Just think of the variety that will be seen over that period.

The Carriage & Wagon team have been concentrating on the new Llangower signal cabin this month in their efforts to make the new structure water-tight. The window apertures are being glazed and the new cabin should be finished in the coming weeks. 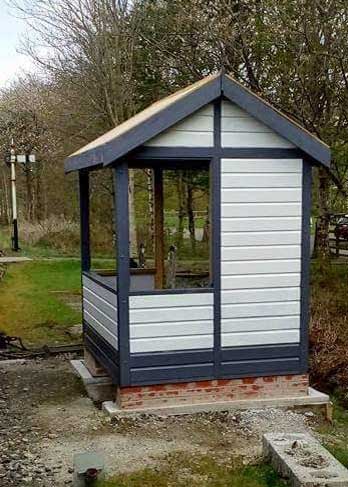 We include a photograph of the completed HLF sponsored Carriage Shed Extension/Interpretation Centre, this time filled with our collection of heritage stock. The shed is now being used for loco storage as well, thus freeing up vital space in the main loco shed/workshop. 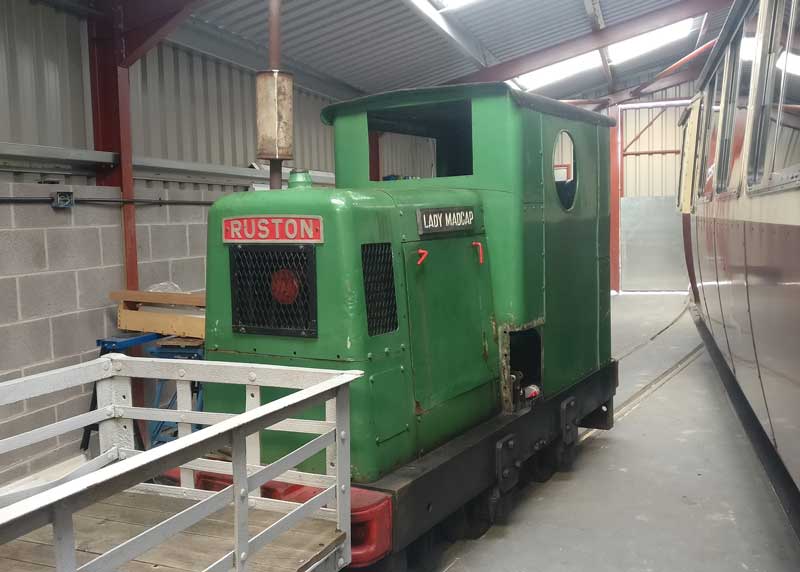 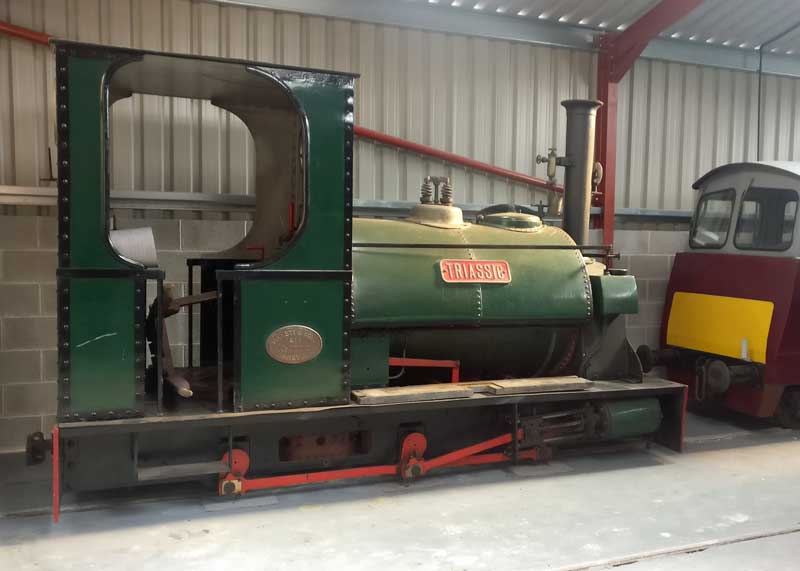 And finally…….. it is delightful to note further comment after last month’s station webcam discovery of innocuous tea-drinking. The unfortunate recipient of such scrutiny made a couple of off-the-cuff quotes which we print here, the first being apposite in view of recent events in a different world; “That webcam brings out the voyeur in us all”.

His second summed up what we all at the BLR strive to achieve; “The growth of the railway raises one’s enjoyment of being part of it”.