Bearing in mind the BLR has only three full-time staff, we are indebted to our loyal band of volunteers who achieve so much and in all weathers, as you will read. Throughout all this, the humour persists, as does the large amount of tea and flapjacks consumed. What follows is but a taster of the huge amount of varied work that is achieved, a credit to all who come to help the railway in the often bleak mid-winter months which is when, in the eyes of many, the bulk of the hard work gets done.

We refer of course to the Working Weekends and the Wednesday Gang. Our intrepid teams have been beavering away at not only cropping trees and keeping the foliage at bay, but also the laborious task of major carriage refurbishment with our photos showing the extent of the work. As it was easier to shunt the carriages into the loco shed which has better light together with the added bonus of heat, the locos were moved to the carriage shed. Needless to say, the resident wags were immediately on good form. 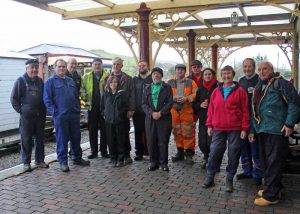 The day started with a safety briefing on the care needed around the wood chipper. Once completed, General Manager David Jones asked who wanted to work on the carriage and several volunteers stepped forward. This was to be the ‘A-Team’. The ‘Leftovers’, (showing commendable indifference and good humour), were to go bush-whacking at Flag Halt sea-wall. Much laughter and leg-pulling was had as the ‘Leftovers’ boarded the works train and set off, no doubt with several unapproved railway hand signals!

The weather forecast was not brilliant but good fortune smiled on the ‘Leftovers’ as, apart from a couple of showers, we were able to work rain-free. A few of us were busy with chain-saws and the chipper while the rest of our group, armed with loppers and bow saws, attacked the lakeside growth. Tea, chocolate biscuits AND flapjacks were taken at well-earned breaks. The rain finally stopped us working at 4pm, by which time about half the length of the lakeside stretch had been cleared and a good stretch of the opposite side cut and chipped. This was a superb effort by the ‘Leftovers’, and all in bracing lakeside fresh air, with tea and flapjacks. Leftovers indeed!

Volunteer Tim Williams posted some great photos of the day and added graciously that while a lot of work on the carriage was carried out, the team down the line deserved a medal for their perseverance while dodging the frequent downpours near Flag. While working inside, they thought (perhaps with envy) of the team outside.

The 14th saw another volunteer team attack the bridge at the cattle creep, known as Durrant’s Drop, named after the mishap of one Jonathan Durrant. A good coat of bitumen was applied and the builders’ plates, which had been removed earlier, were refitted. Also carried out was a bout of joint packing and, of course, bush-whacking. 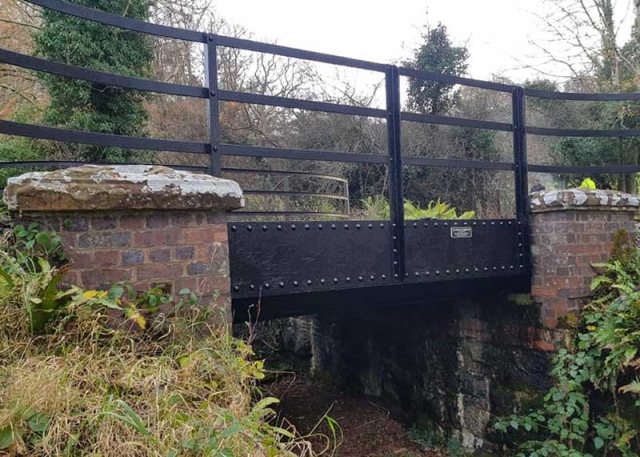 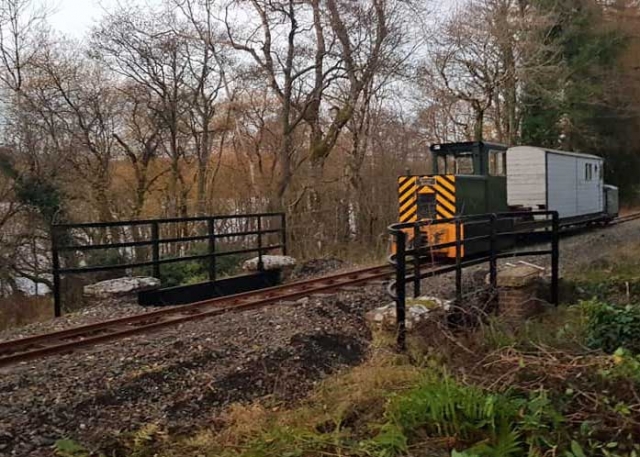 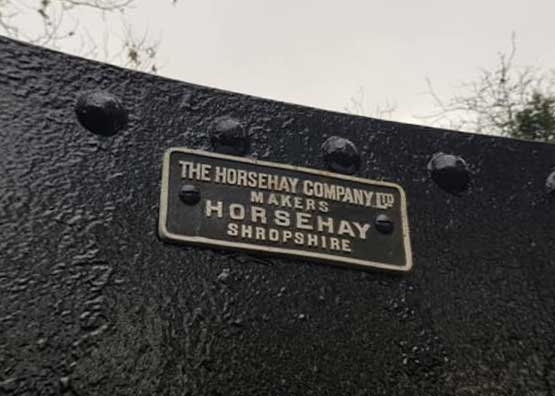 As a codicil to this section, we include photos of the extent of the carriage refurbishment. One in particular has been stripped to the bare chassis (naturally prompting more bouts of air conditioning humour) and has had a thorough rebuild including a new floor, all new side and end panelling, a tricky job as accuracy is paramount, new roof panels and two new doors inserted on what is currently the non-platform side (in readiness for extending services to Bala Town). To finish off, the seats have been re-trimmed and the whole carriage repainted. Not bad going in just 5 weeks! Our final photo shows the finished article. 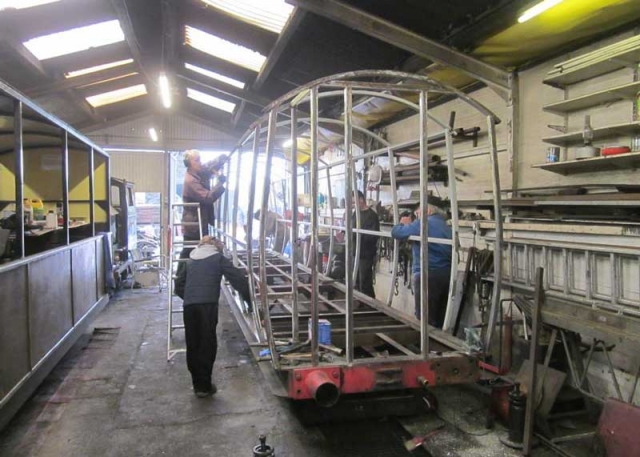 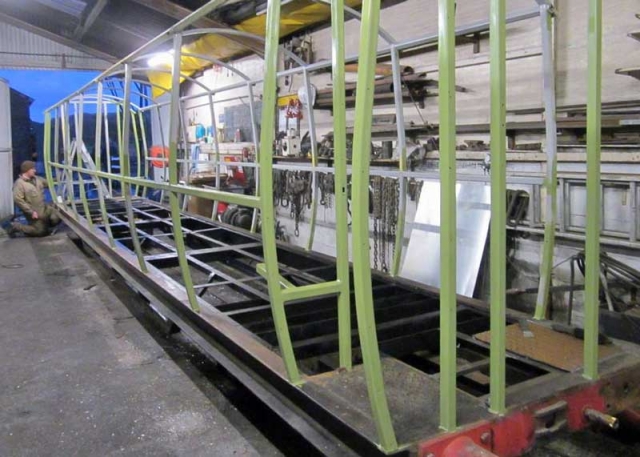 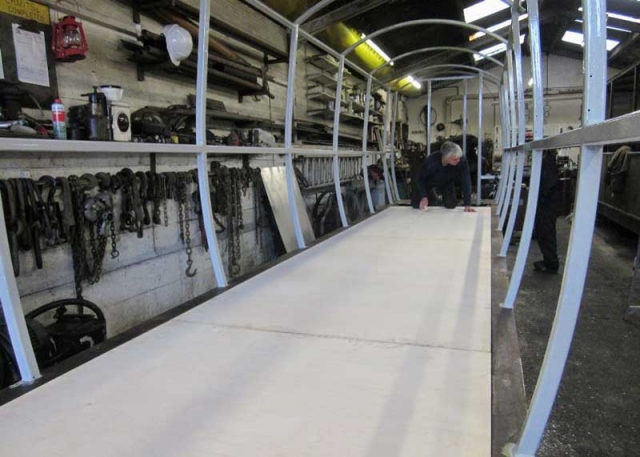 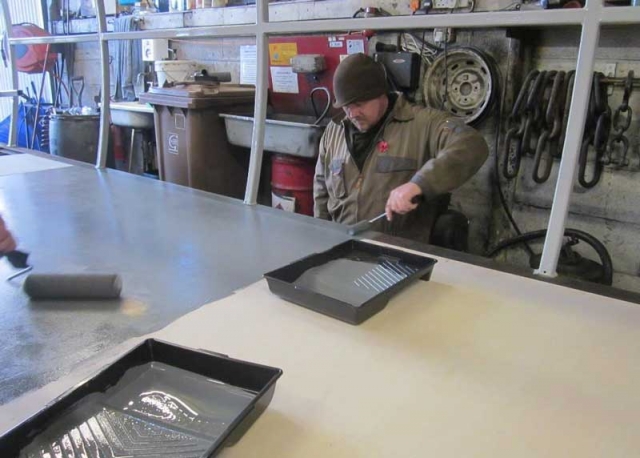 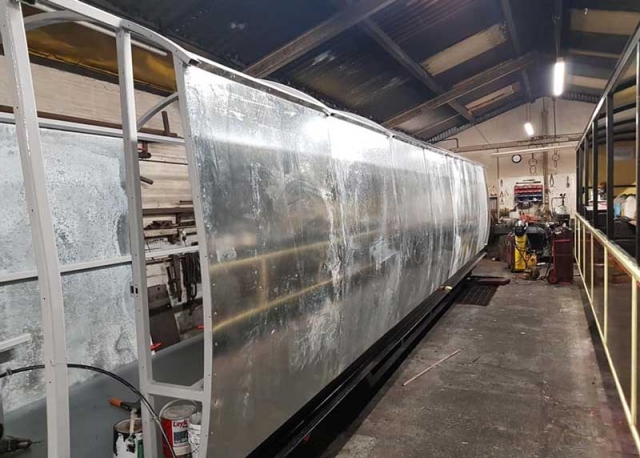 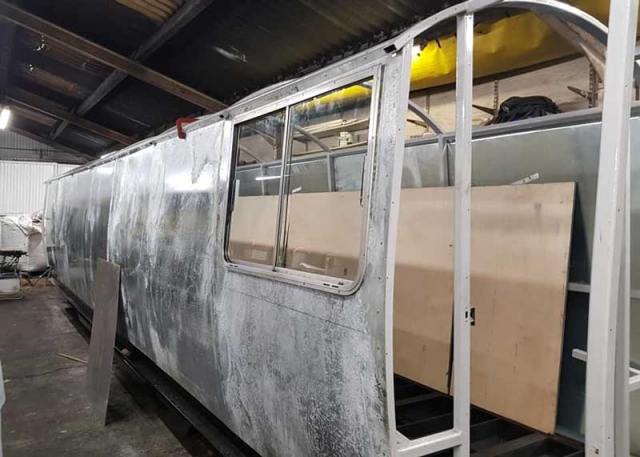 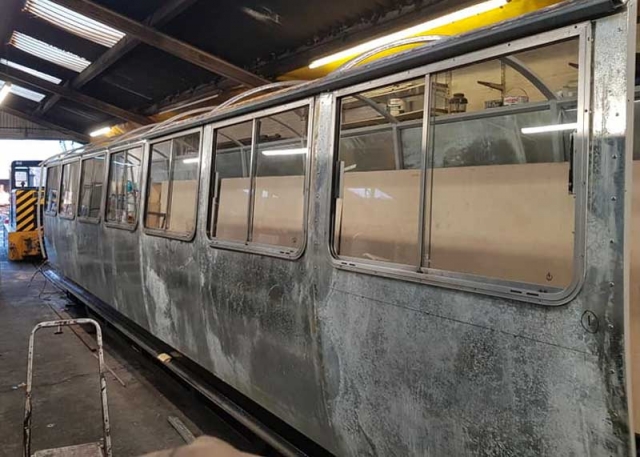 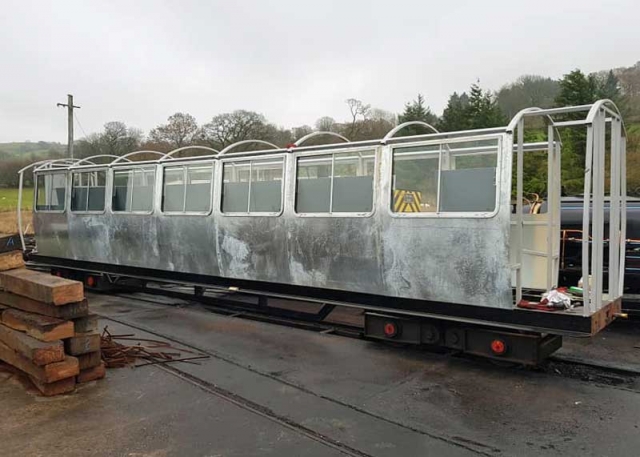 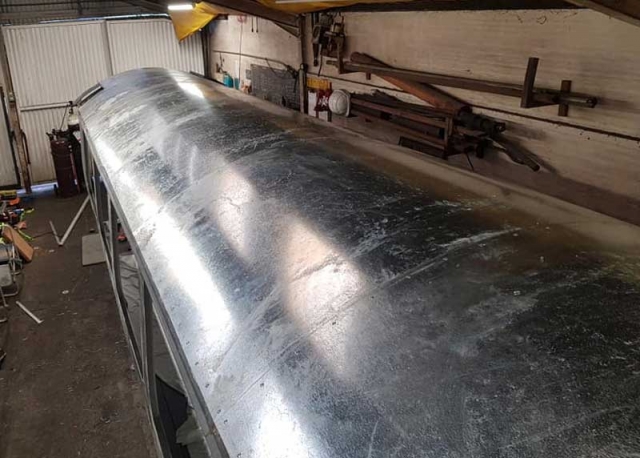 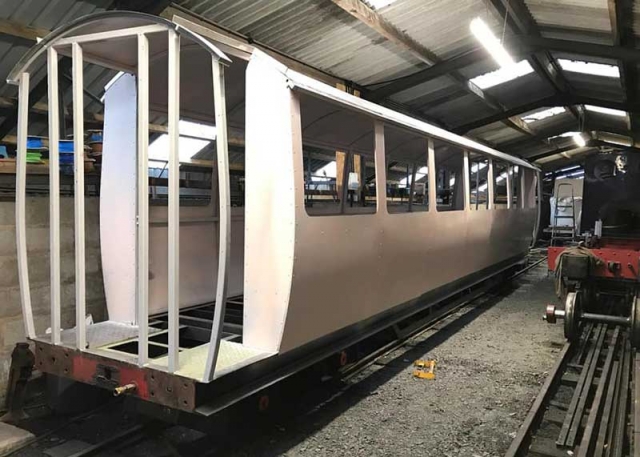 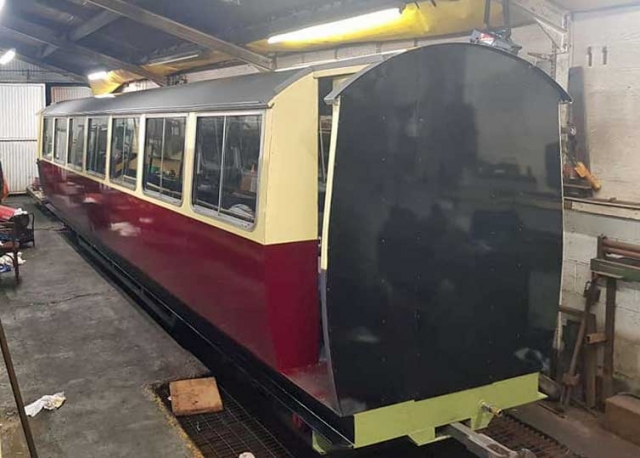 After our last report on The Penrhyn Coach, David Hale has been making progress with the seating and the armrests are the next items to be delivered soon. In the meantime, the subject of door handles has been addressed and as David reports, this is another area where accuracy is essential.

Having been unable to find suitable handles at a local architectural ironmonger, on the internet or on any heritage railway site, I have to admit that I was somewhat concerned as to whether I could produce any which, although not as the original, would look as if they ‘belonged’. I spent many hours thinking about the process of making them until a couple of weeks ago, I suddenly saw a solution. I drew out the ‘D’ handle using my CD package on the computer and forwarded the file to a friend who has a CNC milling machine. As can be seen from the pictures, the ‘D’ comprises four half ellipses blended together to provide what I hope is a pleasing shape. The friend Jon Banfield and I spent a whole Thursday two weeks ago producing two handles, since when I have been machining the brass bosses and back-plates on the lathe at home. The photos show the results. As it turned out, it was not such a difficult job as first imagined. The first two photos show an assembled handle with the components for the second in an exploded view, with the final one in situ. All that now remains on this job is to prepare a couple of square bars to pass through the doors on to which the handles will be fitted to operate the door catches. I will then remove the handles to give them a final polish and a couple of coats of clear varnish. 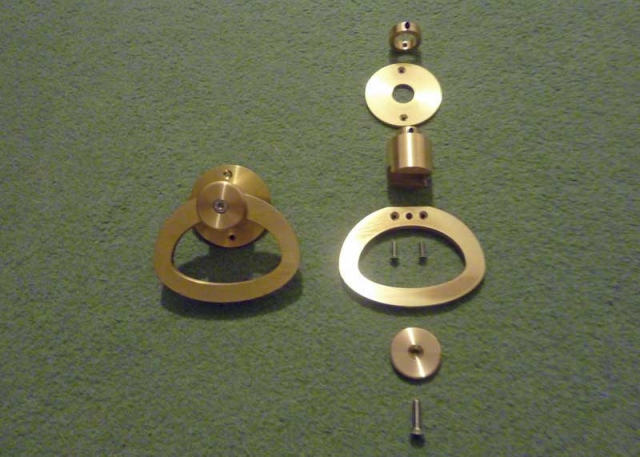 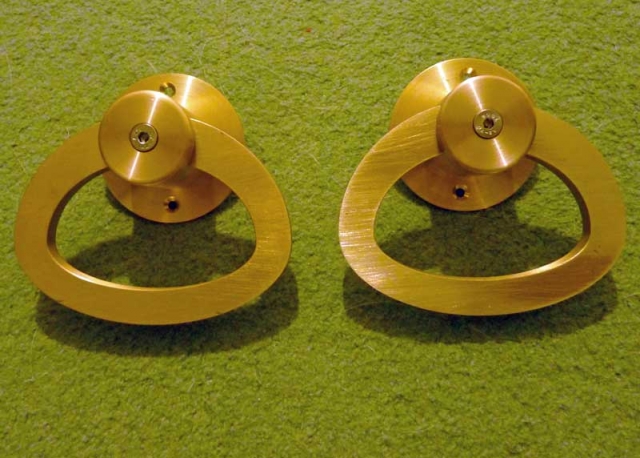 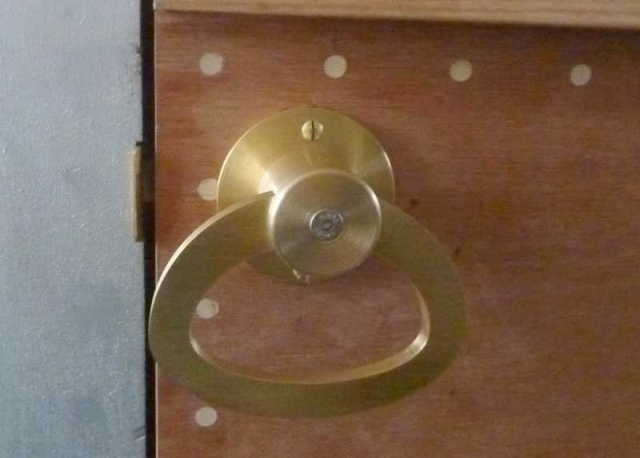 Yet again, this demonstrates the exquisite detail and expertise which is being lavished on this project.

On the 21st, David Jones announced the arrival of two signal posts and a bracket signal at the Bala Town station site. Previously used at Craven Arms, in Shropshire, these items were not only donated by Network Rail but they were delivered free of charge too, a greatly appreciated gesture. The arms and other small pieces are expected soon.

Dates for 2019. The winter programme is hotting up and we list some useful dates.

And finally….. there is an ever-present artistic flair around the BLR, as borne out by the two photos we include here.

The first is a remarkable shot taken by regular volunteer and driver Tim Gregson.

The second, by Chief Engineer Rob Houghton, is of nothing more than a wagon-load of freshly cut sleepers. But combine that with the very neat stacking and moody cross-lighting…..

Last but not least, all at the BLR would like to thank sincerely all who help throughout the year. Your efforts are greatly appreciated and we could not achieve what we do without your valuable input, staff, volunteers and visitors. You help make it all such fun, and it is reflected in our increasing popularity and passenger numbers. It has been a memorably successful year and 2019 will be even better as projects develop and the prominence of the BLR increases yet again.

Finally, we wish everyone involved with the BLR, and all our visitors, every success and best wishes for the festive season and 2019.