The Welsh Government’s brave decision to impose a two-week lock-down right over half-term period in an effort to stem the spread of Covid-19 meant that the last day of operations this year on the BLR was Thursday, 22nd October – and what a memorable day it was. Anyone viewing the station webcam would have spotted the carriages in the station being rigorously cleaned and swept, for it may have been the last day of running but BLR standards never drop. Likewise, a tall crane was visible in the background and awaiting the arrival of a container, of which more later. Winifred was rostered for duty and in the very capable hands of driver Peter Heywood, ably assisted by David Gwyn, a regular pairing of two of the railway’s Directors. The railway had leapt into action on hearing the First Minister’s announcement and did much advertising on social media, with the result that a healthy and worthwhile number of passengers enjoyed trips on the last day in wonderful scenery.

The numbers for October have been reasonable in the difficult circumstances as the weather had been less than kind but on the previous Thursday, trains had been running virtually full to capacity. Nevertheless, using what opportunities were available and permissible, passenger numbers were definitely useful, in spite of the railway losing the bonus of extra half-term visitors. Pestilence permitting, the BLR will hopefully re-open for half-term in February but if not possible, then March.

In the meantime, General Manager David Jones has stated that during the current national lockdown in Wales, none of the engineering staff will be put on furlough as there is so much to do over the winter months and no time to waste, not only work on the locos, particularly Alice for her 10 year overhaul, but also our carriages need attention after a busy season. On top of that, there is the perennial subject of track maintenance, thus once restrictions permit, the Wednesday Gang of volunteers will be scheduled very carefully as our volunteers come from far and wide and, of course, attendance is directly influenced by the varying vagaries of lock-down restrictions. In the meantime, the ‘working week’, always a loose term on the railway, has been re-organised with the blessing of staff so that they have time off during the week rather than at the weekends, thus we can maximise help both when it is available and needed.

The ‘last’ day was noteworthy too for the arrival of the aforementioned container with the railway’s latest addition, this time from Australia, as you will read later. With renewed work on the Penrhyn Coach happening at the same time, it was definitely a ‘Last Hurrah’ for the BLR.

The Penrhyn Coach received the scheduled attention to the mounting of the Coach on to its axles with its creator, David Hale, on hand, as we reported last month. David takes up the story:

During my visit to the BLR (20th to 22nd October), we encountered a number of minor problems which slowed the anticipated progress, hence we simply ran out of time. However, one wheel-set is now in place standing on the rails in the loco shed, and the other is almost ready to go in. Obviously, one end of the carriage is still sitting on blocks but with the other end on wheels, we now have a better idea of how high it will sit. It certainly looks better!

Next time, (whenever that may be), we should be able to get the second set in place fairly quickly. However, we will need to drop the wheels once again to complete work on the axle boxes. At that time, we do not envisage the need to place blocks underneath again as we should be able to jack up each end in turn in order to gain sufficient space to roll the wheels out with space for the axle boxes to clear the underside of the axle guards. 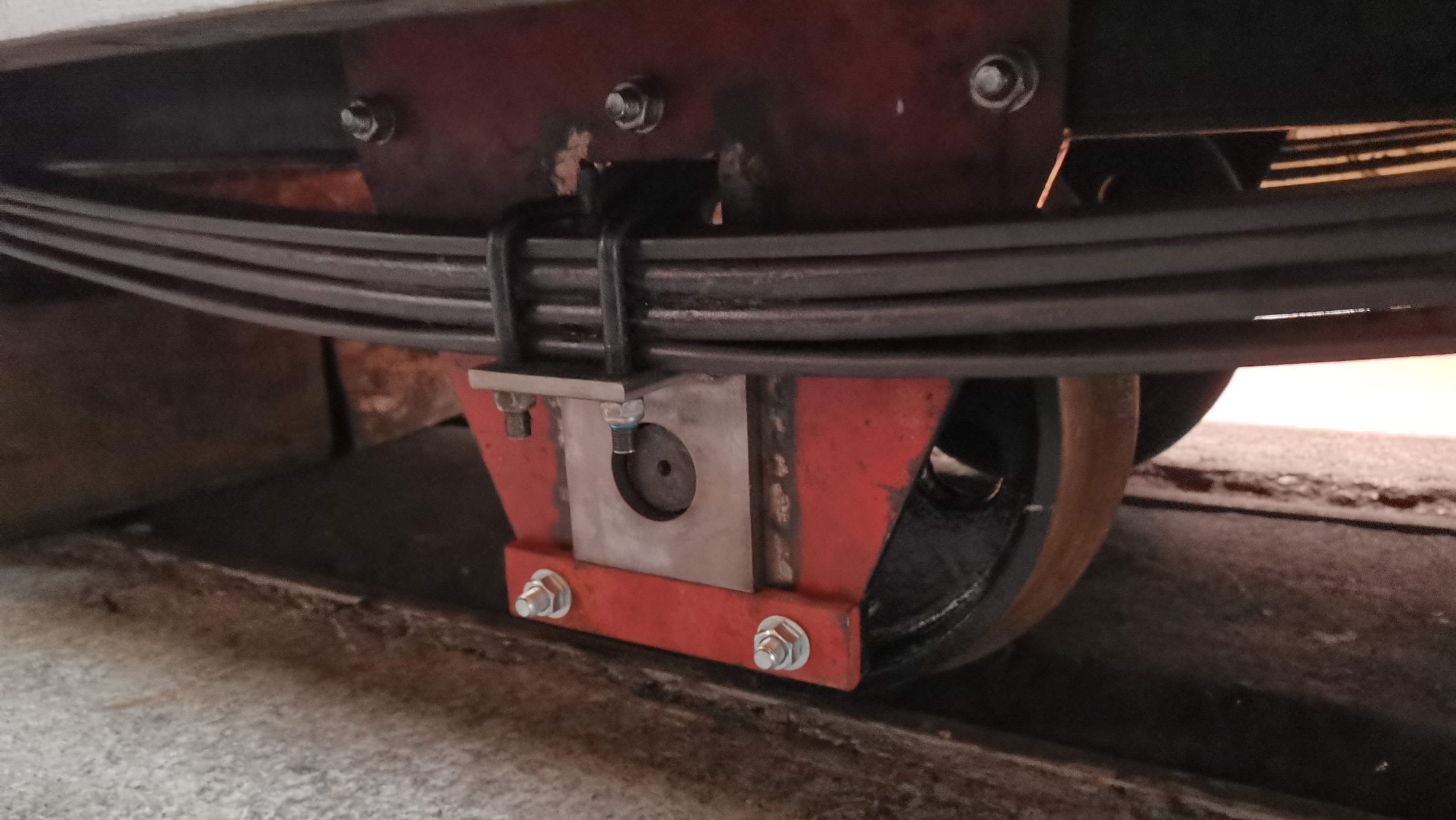 As we mentioned earlier, Thursday 22nd was particularly noteworthy for the heralded arrival of a container with the Avonside loco from Australia about which we commented last month.

The owners, John and Hilary Moorhouse, were on hand to witness the delicate operation to place the container precisely on the plot which had been prepared as well as to perform (suitably attired) the ritual opening of the doors which revealed some unexpected delights.

We attach two video films, the longer one below shot by Francis Stapleton, long-term volunteer who lives locally, with extra footage spliced in by Tim Williams, one of our IT genii, which was captured on our latest security camera. General Manager David Jones captured the short clip above which shows Hilary Moorhouse grappling with a monstrous marsupial. Any initial mental question marks about the container’s contents will be dispelled by John Moorhouse’s following report.

We knew that a friend of Peter, our Australian resident son (and my agent) who is returning to the UK, had taken the opportunity of cheap transport for some of his personal kit, a kayak, beer barrel (sadly no contents), golf buggy and clubs. However, when we opened the container, and much to everyone’s amusement, we were surprised to be met by a very large kangaroo which had been carefully strapped in position. When released, it made a bid for freedom and it took considerable efforts to restrain! Also in evidence were Australian flags, numerous ‘I love Mackay’ stickers (Mackay being the home of Avonside 1909 for circa 98 years) as well as several strategically placed spiders (for Dan Laidlaw’s benefit?). It was all the work of Peter and our two grandchildren.

For the last six or seven weeks, Peter, who had loaded the engine, had been concerned whether he had secured it well enough. However, jacked on to numerous timber beams, wedged with chocks, secured with chains, 12 heavy duty ratchet straps and numerous small straps, the engine would not have moved even if the container had fallen off the ship! Consequently it took several hours and numerous false starts before the engine finally agreed to emerge into the daylight of its new Welsh home.

Having been ‘stored’ for around 58 years and then attacked by Peter to make it fit into the container, we knew it would not look pretty and we were not disappointed! However, being 90% complete, I am certain that it is eminently restorable and will make a useful locomotive for the BLR. Although possibly a little optimistic, it would be wonderful if it could be operational for its 100th birthday in 2022 and, I believe, a milestone for the BLR. If lockdown continues for a long period, this may become impossible.

One humourist said it would be good to see the loco back in steam by Easter but was prudent enough not to specify which year! John also added that the loco does not have, indeed never has had a name. Farleigh Mill, where it worked, had an older Avonside called Kathleen and 1909 was simply referred to as ‘the new Avonside’. Perhaps this situation will be changed in its new home. 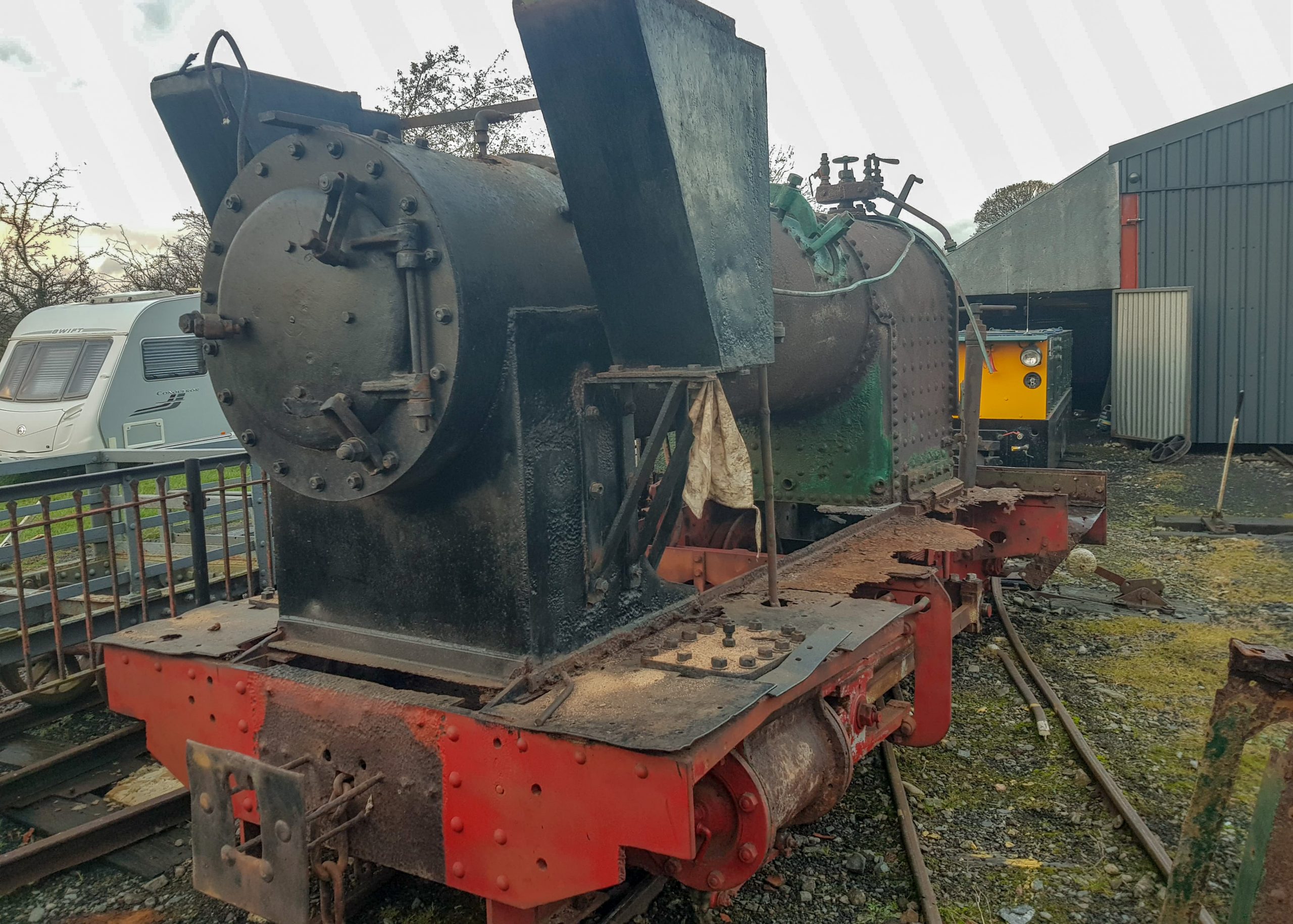 Even in these troubled times, the Bala Lake Railway Trust never stops in its quest to complete the extension of the railway back into Bala Town. So far, over £1.2 million has been spent and another £2.5 million is still needed to get the extension finished.

Recently, a petition was launched to convince the Welsh Government to support the project and to date over 2200 signatures have been received, described by Trust Chairman Julian Birley as an ‘overwhelming response’. On top of this, there has been great support from Bala businesses and traders as they realise that the line will bring an estimated extra 55,000 visitors to the town and inject upwards of £1.25 million into the town’s economy. Julian commented further; “It will make Bala a place of destination where visitors can come and enjoy all that this attractive town and the lake have to offer”.

Crucially, a spokesman for the Welsh Government expressed general support for the project, adding; “We are continuing to have positive discussions with the Bala Lake Railway. We see this as being a strategically important project for the area”.

And finally….. you will recall that the railway recently acquired a delightful kitten, or rather, the kitten acquired a railway. We show two photos of our recent arrival Marian, one of her perched happily on Dan Laidlaw’s shoulder with the second showing her sitting nonchalantly in the loco shed with Winifred simmering in the background. 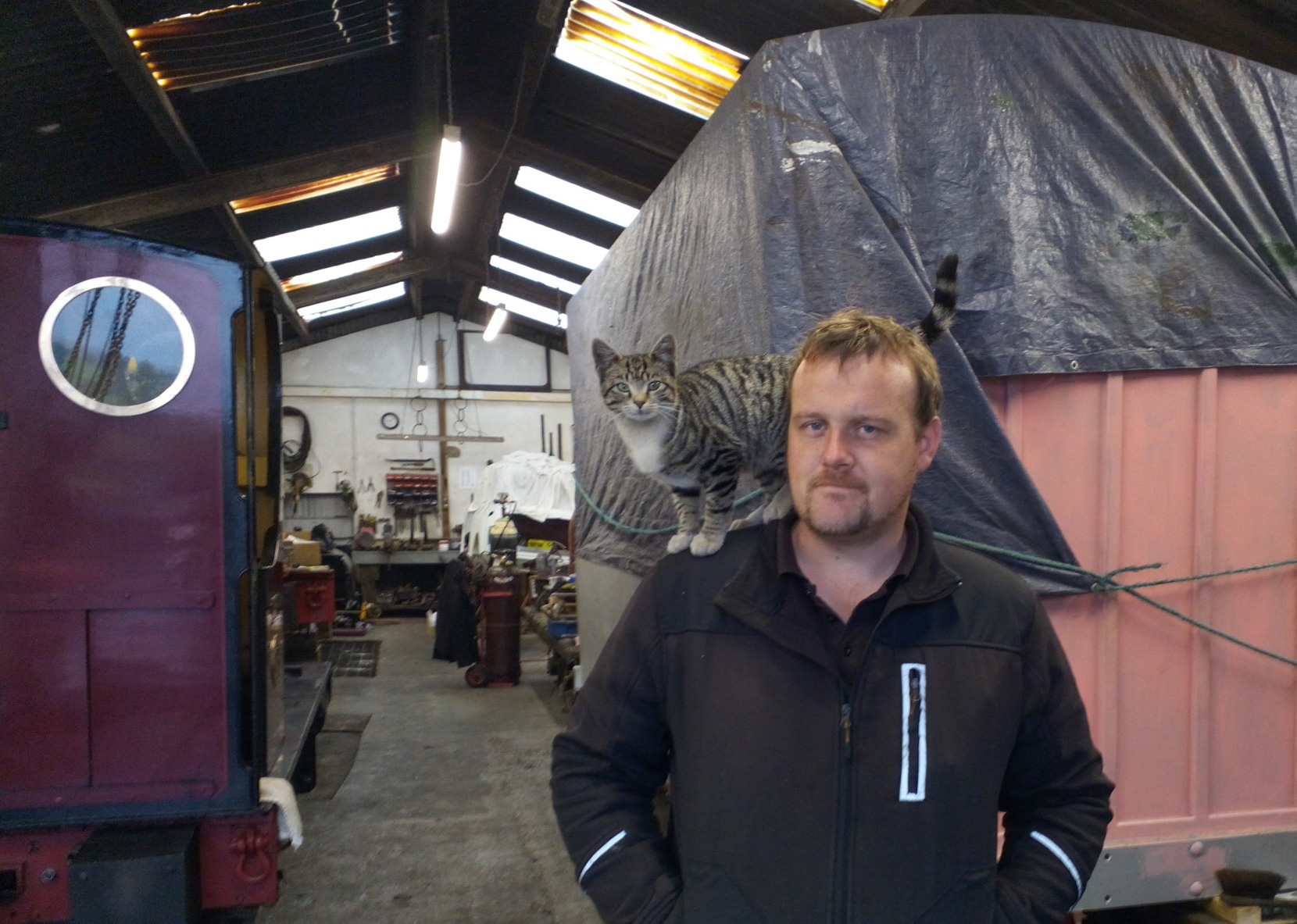 She is very affectionate but has a mind of her own, thus giving further credence to the adage; ‘Dogs come when you call them but cats take a message and get back to you’. 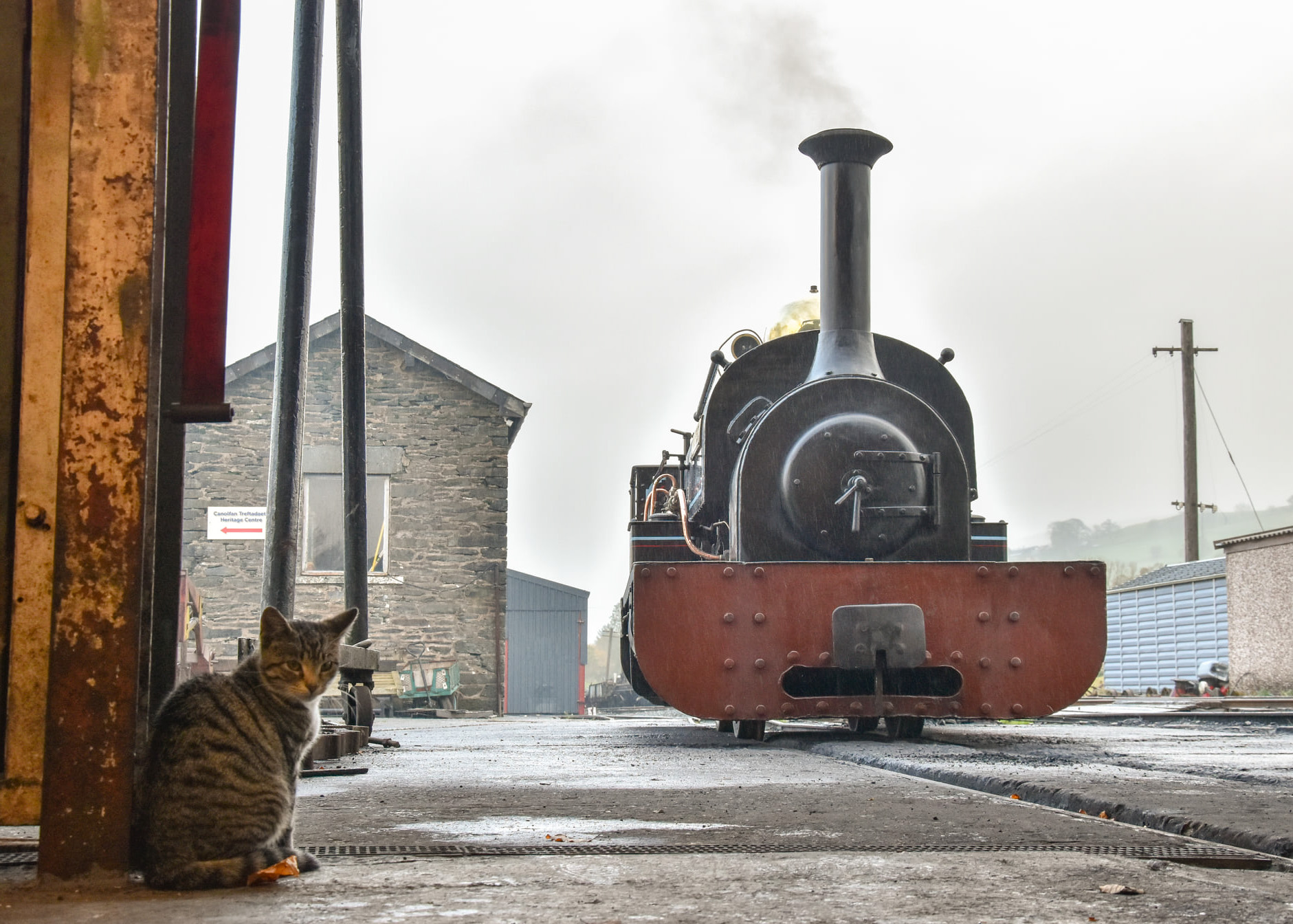