It is wholly applicable in this 100th edition of the BLR News in this format that we highlight excellence, ingenuity and success, thus the content will concentrate on these specific topics.

Bala Re-Railed, the event to introduce the residents of Bala to steam railway activity for the first time since the mid-1960s, was an unbridled success from every aspect. The whole concept was inspired, ambitious and was the product of the fertile brains of several enthusiastic members of the BLR team. Laying 200 feet of temporary track within the site of the new station and hosting a free-entry spectacular sounds easy but an enormous amount of effort went into clearing the site of long grass and laying and ballasting two-foot track, not forgetting the 7 ¼ inch circular track as well, was only part of the task. The main job of co-ordinating everything fell to Tim Williams who achieved total success, possibly due to his fetching French beret, but mainly because so many attentive volunteers assisted with anything that needed doing. Marquees were erected, large stones were carefully cleared, the grass was strimmed, a water tank was installed at end-of-track atop a pile of sleepers and everything was ready for the Saturday morning. Let us not forget the star of the show, Winifred, which was transported on a flatbed truck, as well as one of the railway’s Penrhyn Quarrymen’s coaches for free rides. 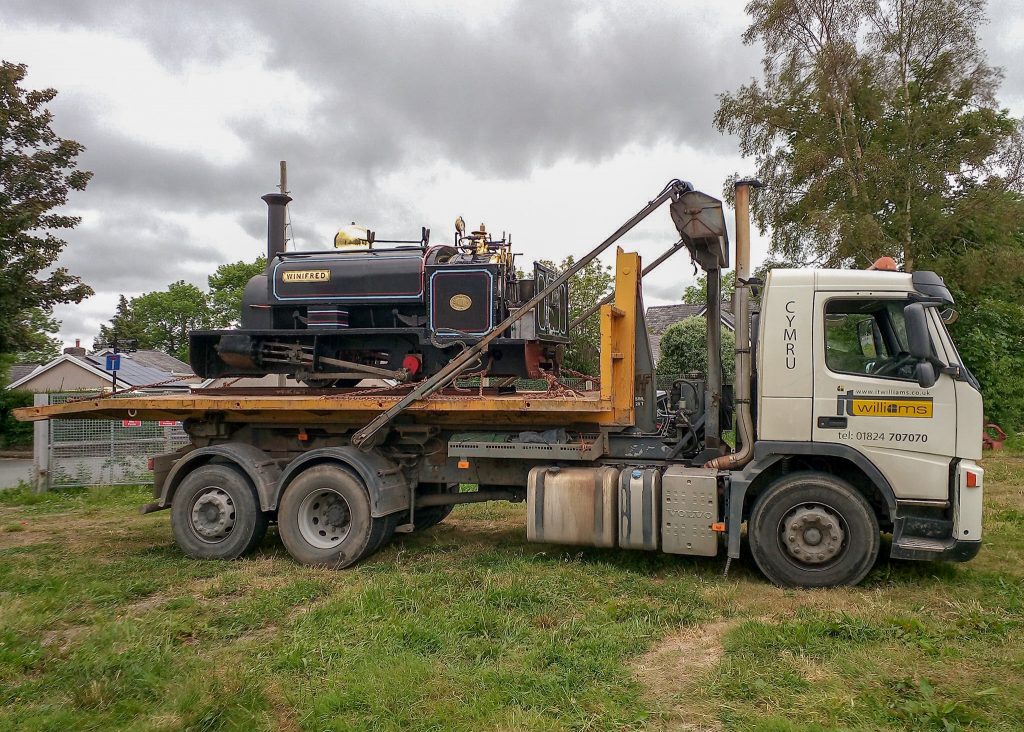 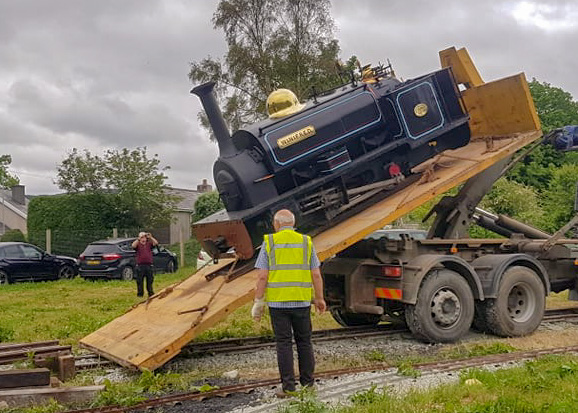 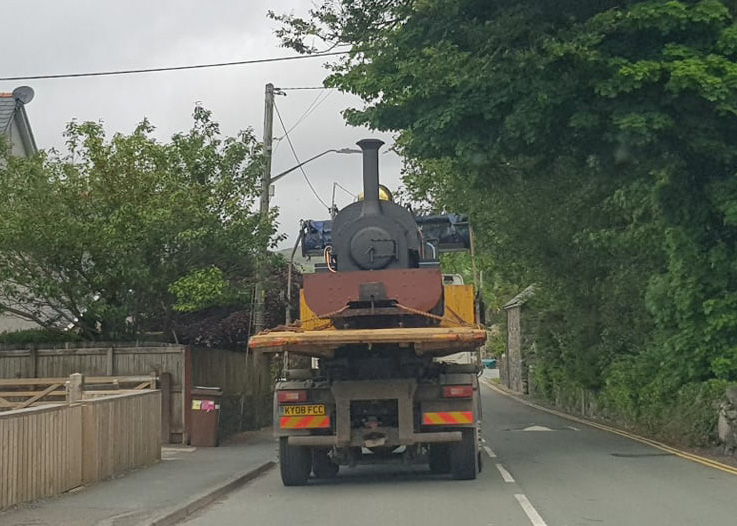 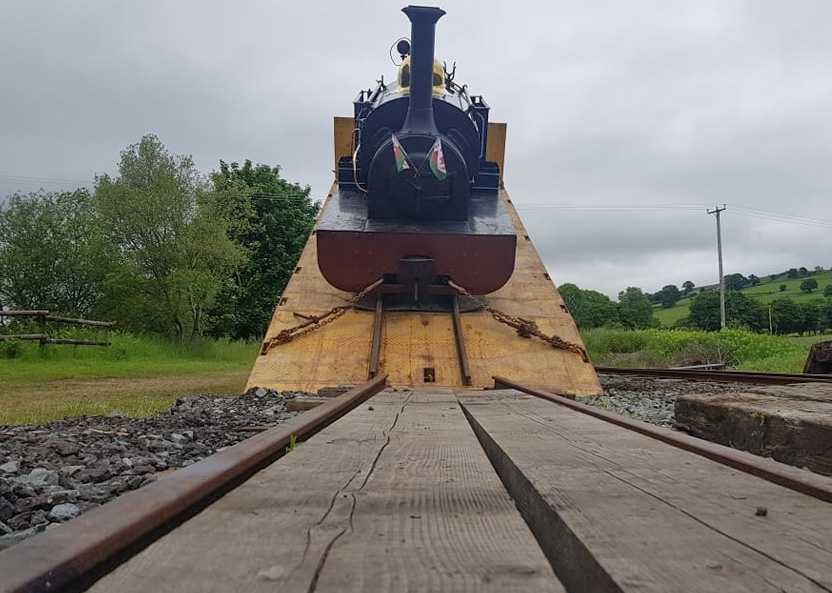 Loading and unloading the loco meant that she was pointing down at over 30 degrees before she reached the track, much to the visible consternation of her owner! But this part of the operation was masterminded by Rob Houghton and Dan Laidlaw who, with the expertise of the contractor who has decided to come out of retirement for just this operation as he used to travel to school in Bala by train, calmly made sure that nothing untoward happened. Winifred was actually steamed the day before the event and the honour of piloting her on her first test run naturally fell to Rob and Dan who duly eased her along the track for the first steam movement in Bala for decades.

Together with catering stalls (including a delightful ice-cream lady who was so taken with the atmosphere that she became a volunteer) plus displays of some very fine cars, both classic and rally-bred, the whole two days achieved a colossal amount of goodwill and public relations. Many visitors knew of the extension plans and were amazed by the atmosphere. They in turn spoke to others who could not attend, thus the ‘word’ was spread far and wide. Indeed, positive reaction is still being heard weeks after the event. Unexpected phone calls from distinctly notable people spoke of the congratulations, goodwill and awe for the scale and success of the occasion. The combination of an inspired idea, a catchy name and superb organisation really hit the target.

On top of free rides, classic cars and other interests including the local fire brigade which could not do enough to help and topped up the water tower frequently, BLR Trust Chairman Julian Birley conducted two walks per day over the entire extension route from Pen y Bont station, the current terminus, to the new station site and explained in erudite detail the huge efforts of so many expended so far for what has been achieved and also what remains to be done. 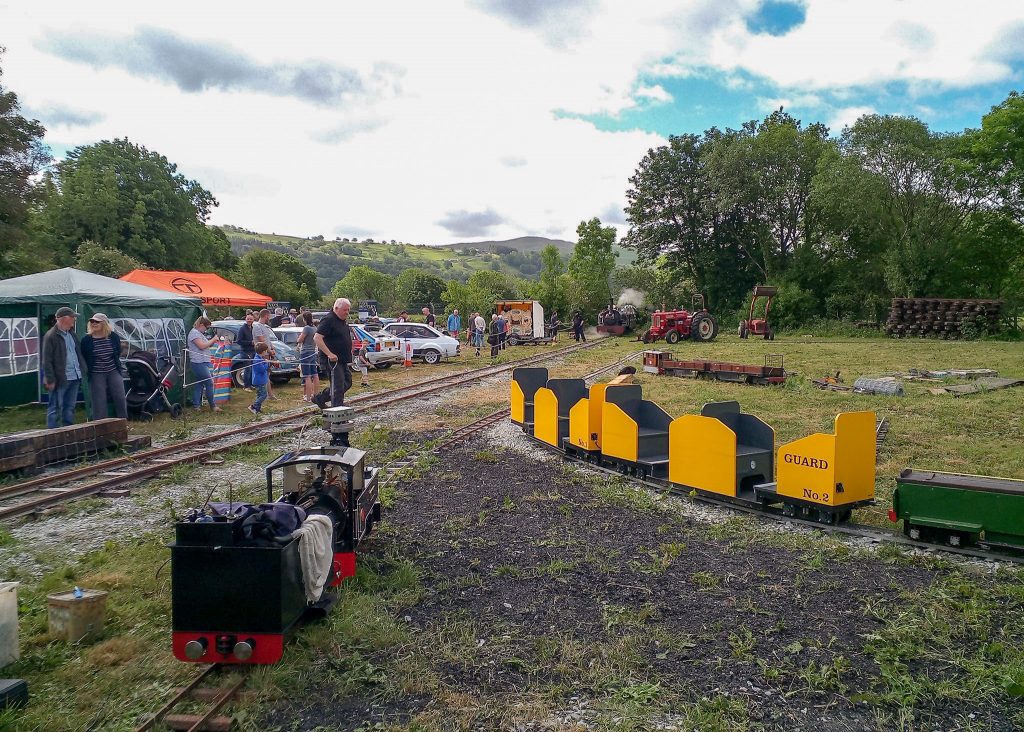 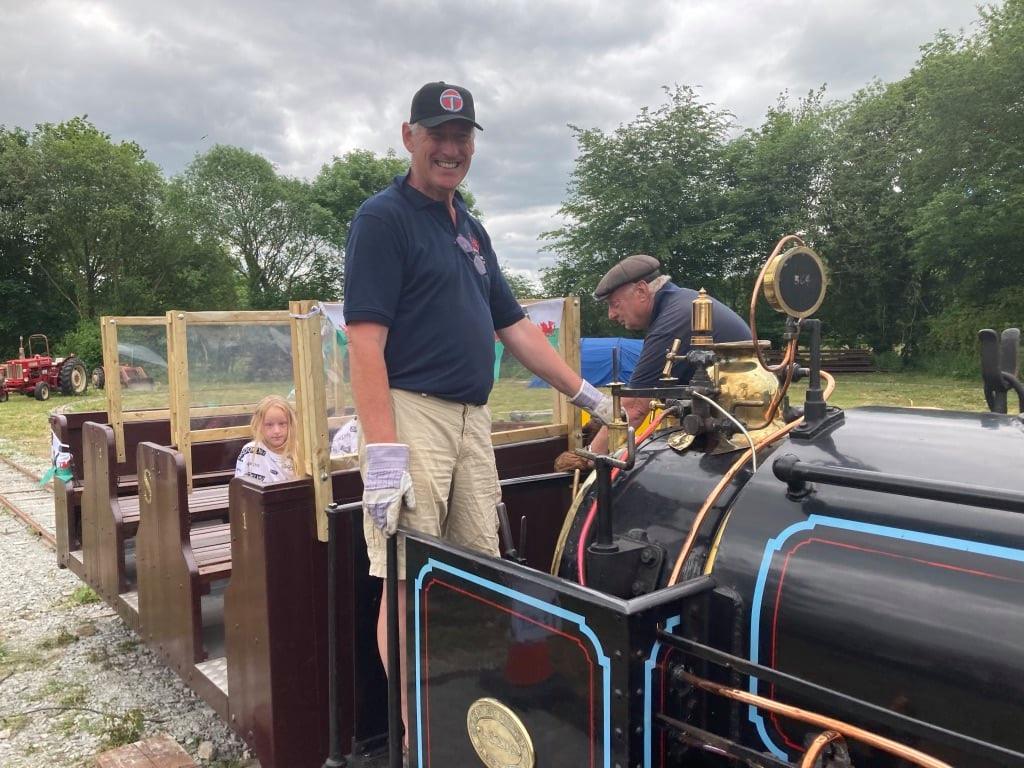 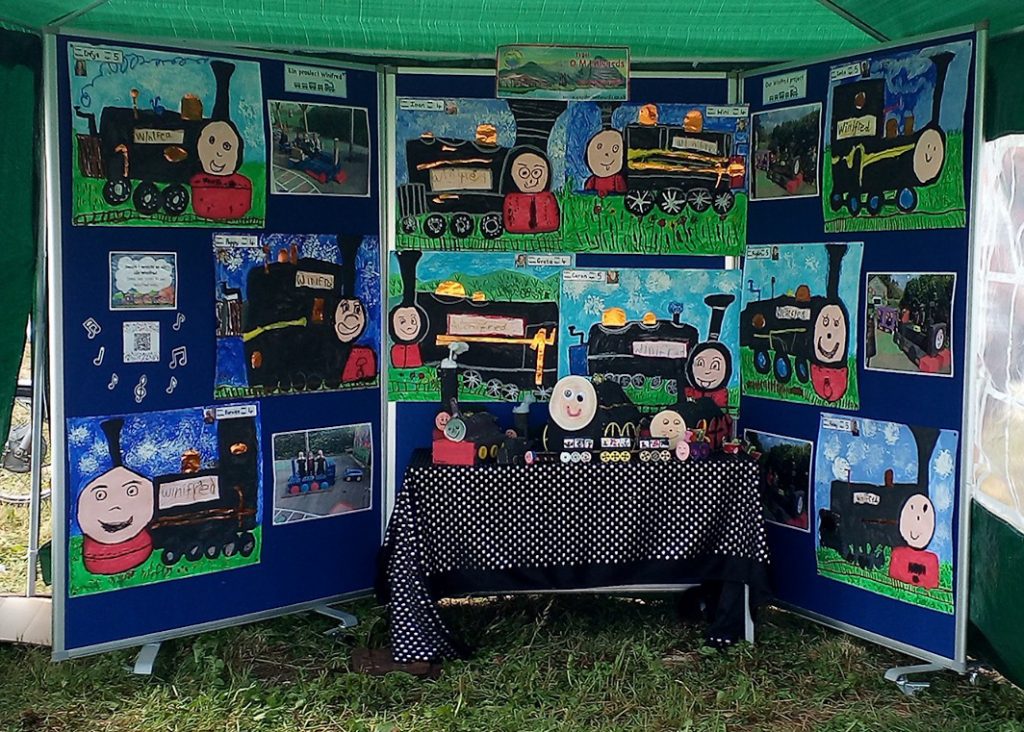 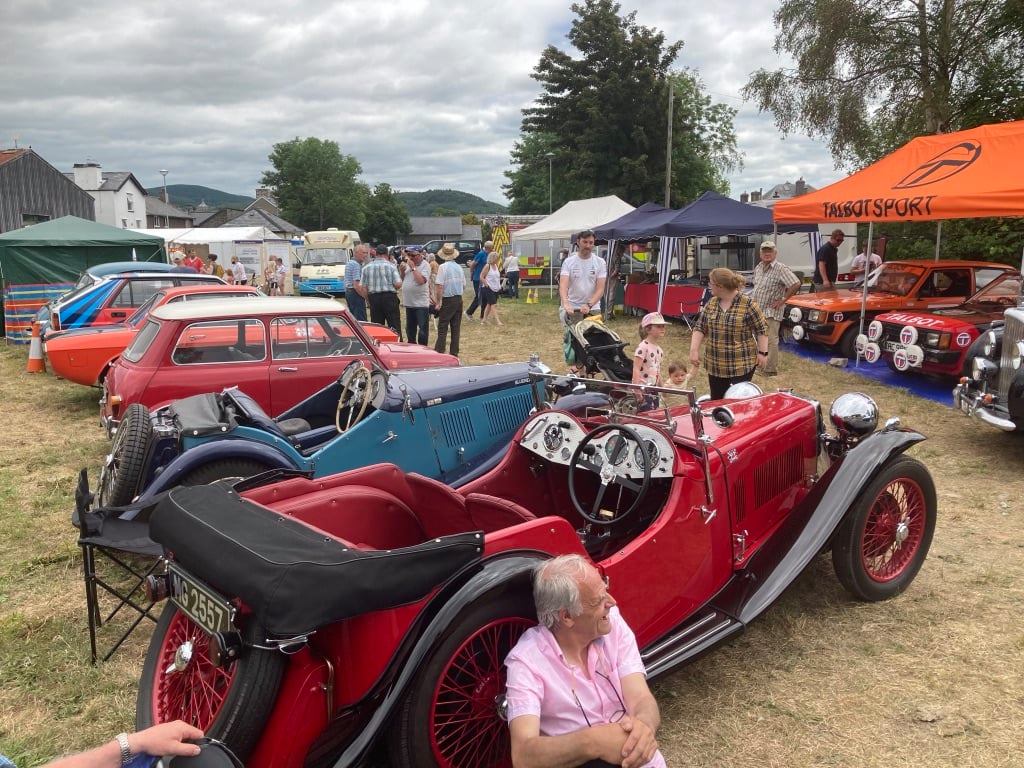 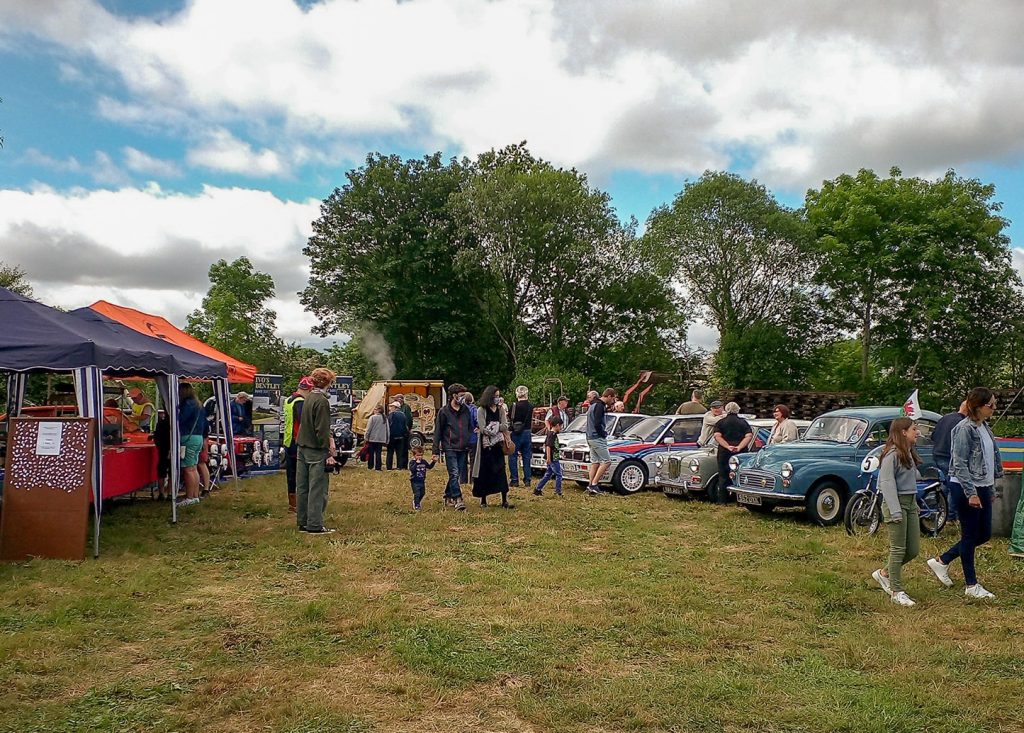 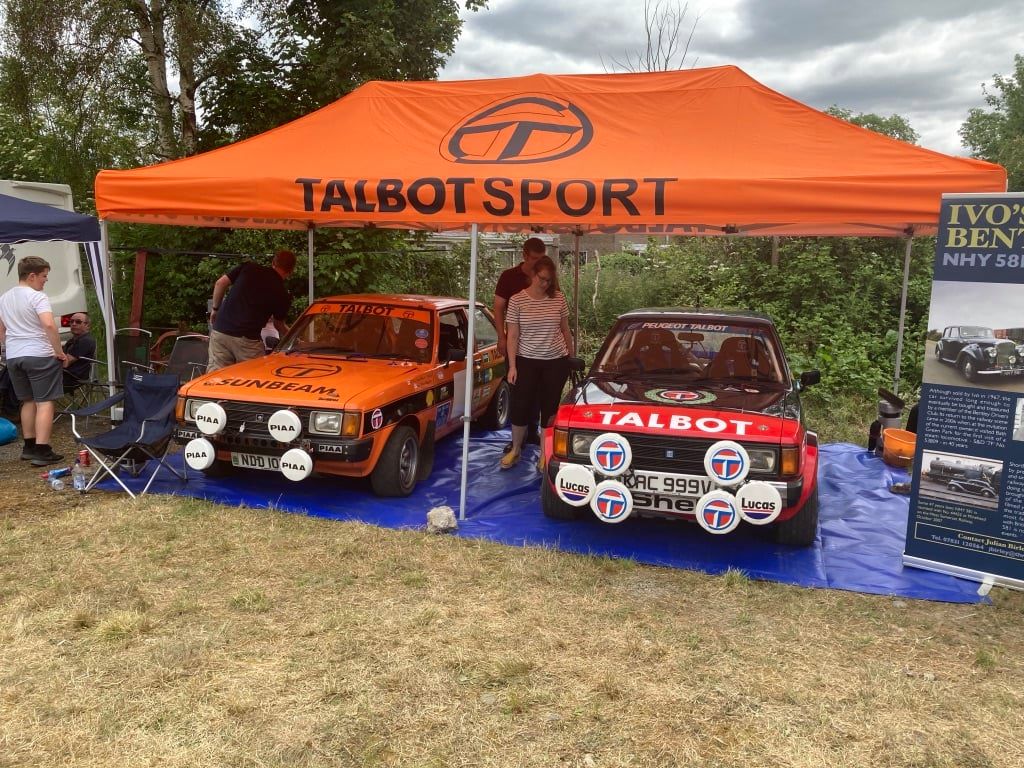 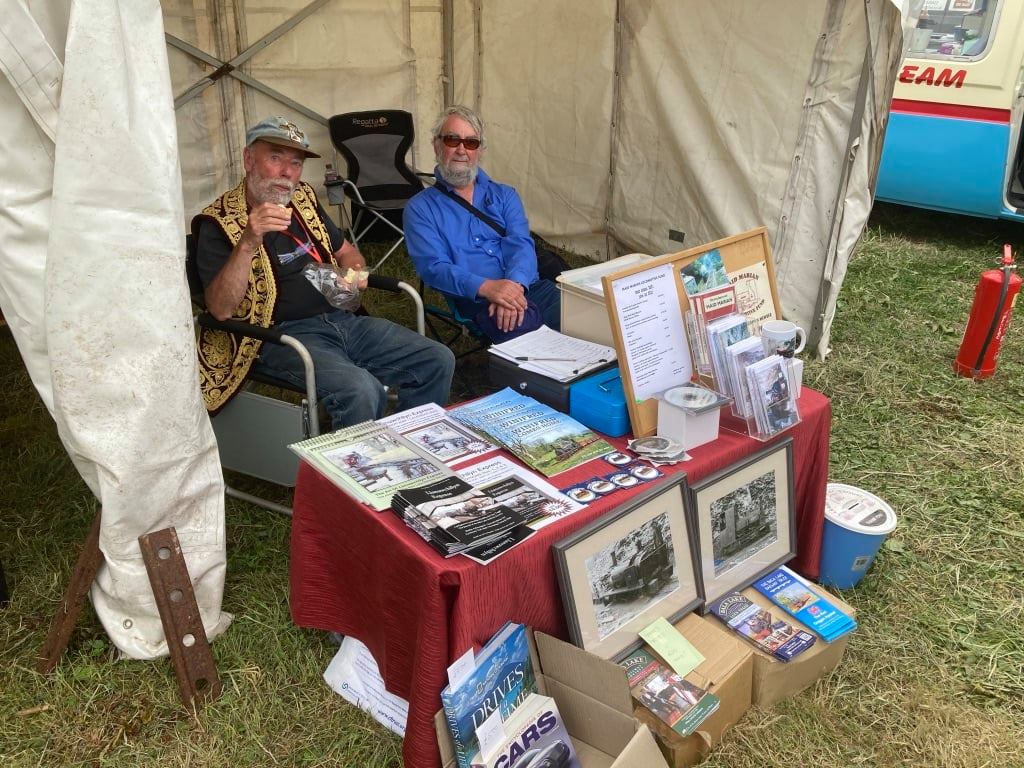 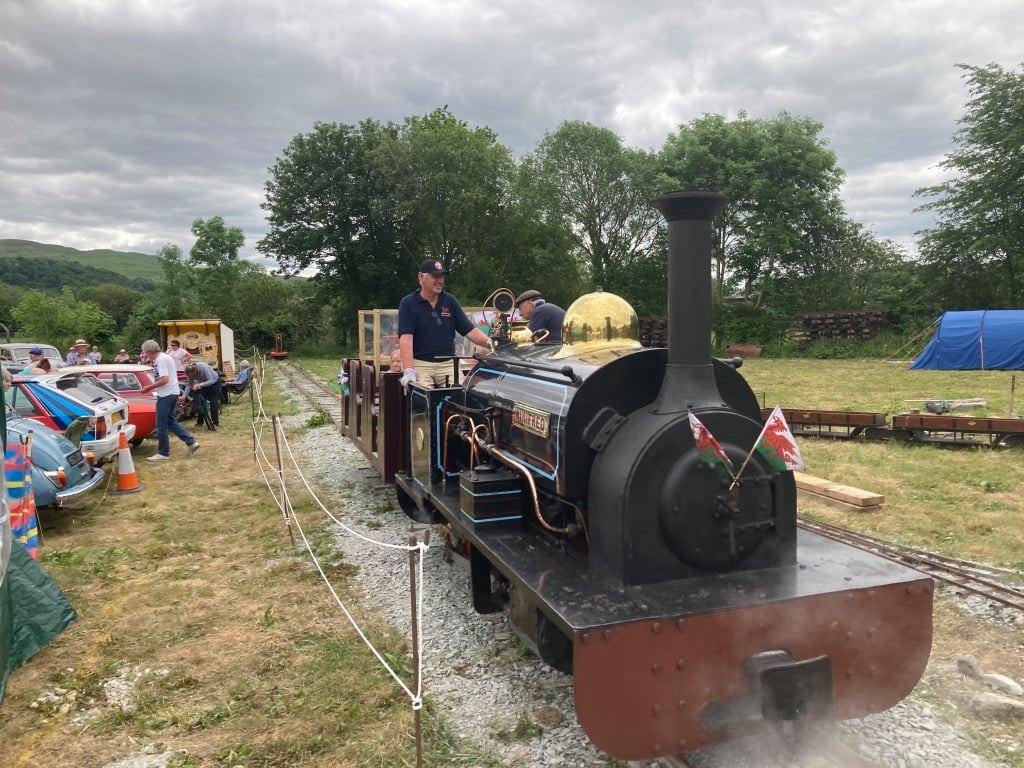 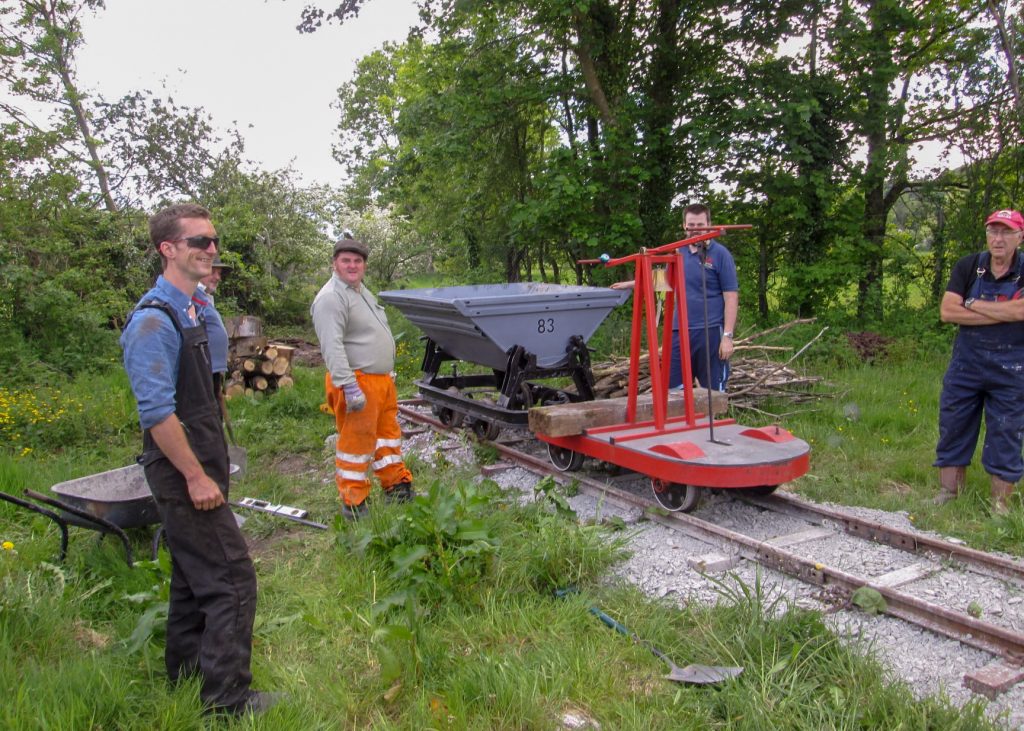 During the Saturday afternoon, the first official sign for the new Bala Station was unveiled, with Julian Birley praising the co-operation and support from local and national bodies, and Councillor Dilwyn Morgan, the staunchest of supporters of the project, replying in both Welsh and English that the steam activity on site and the new sign were the portent of wonderful things to come.

Another facet of the local enthusiasm was shown by the pupils of Ysgol O M Edwards Llanuwchllyn who took Winifred to their hearts and made impressive models of her and the new Bala station in card. They even composed a delightful song in Welsh which was posted on public media. As a perfect ‘cream-on-the-cake’ moment, the following Tuesday saw the children arrive at Llanuwchllyn where Winifred was steamed specially for them and where they performed their lovely song again next to the loco with her owner looking immensely proud. 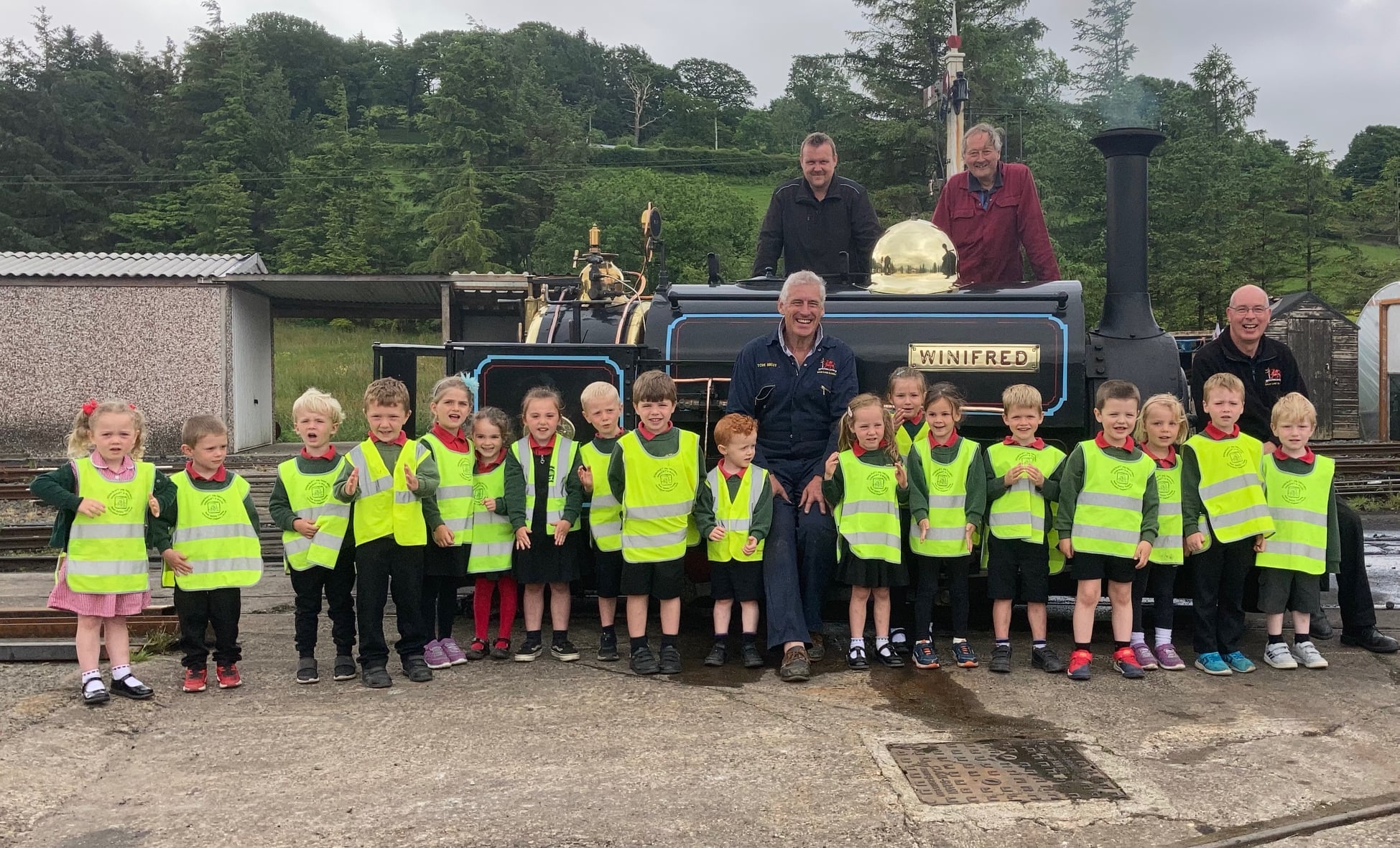 As the Re-Railed event was free to all, no specific entry numbers were kept but suffice it to say that the success of the whole event over the weekend and in the long term was enormous and immeasurable.

June was an extremely and surprisingly successful month for the BLR. Visitors arrived in droves, and to whet the appetite for future inclusion in these pages, a new coach is being constructed (the picture below shows the initial work on the chassis in mid-June) and whispers about a new arrival are getting louder, of which more in the near future. 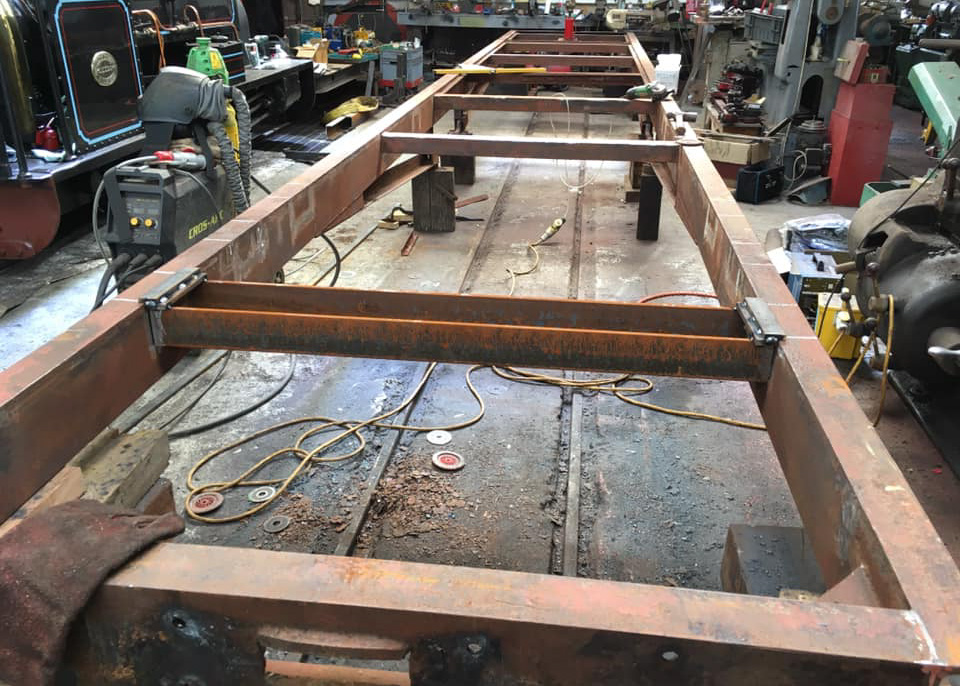 One small but relevant example of the extension project is the erection of a new shelter at Bala Pen y Bont, this being a permanent structure which will not move when the new extension is built. 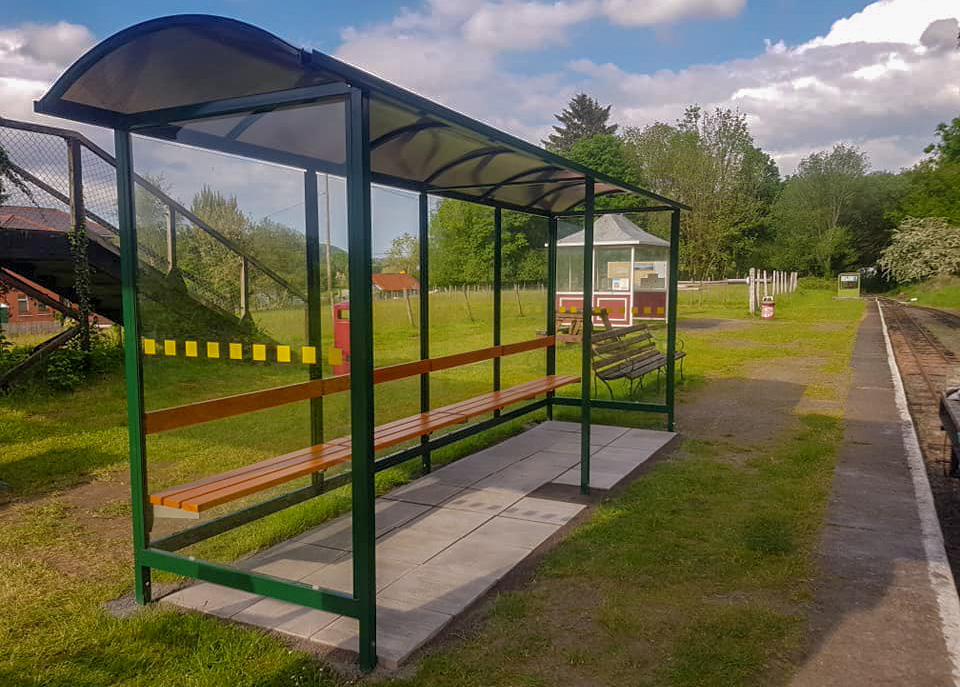 But one project which has been brewing over the recent months is the BLR Archive, a means of preserving historical photos and information over many years. Perennial volunteer Russell Prince (he of the flamboyant waistcoats on the footplate) and Tim Williams have been busy laying the foundation for what promises to be a multi-faceted project. The launch of the archive is imminent so expect a further announcement very soon and get ready to upload any suitable photos that you are willing to share.

The use of simulators is familiar to all as they are used in the airline industry and are a special feature at shows events of all kinds, whether a plane, racing car or whatever. But new volunteer Aaron Thompson has gone one better and is developing a Train Simulator around the Bala Lake Railway. He takes up the story.

At the end of May, I happened to spend my Bank Holiday weekend a little bit differently to most people when I ventured out to the Bala Lake Railway with the aim of recording some quarry Hunslet sounds These sounds are to be used in my first train simulator project which just happens to be the BLR with a planned 10% of all sales going to the railway.

As a novice to sound recording, I was unsure how it was going to go but I was optimistic and looking forward to the day ahead. I arrived at Llanuwchllyn at around 8am where I was met by Tim Williams who was standing in front of three gleaming locomotives which were all being prepared for the day ahead. Maid Marian was steaming in readiness for the first train, Winifred was being prepared and the crew of George B were starting their checklist.

I had informed Tim of my visit beforehand and so he was ready to help me sort out how I was going to capture the sounds which he expected me to do with a clamp on the loco, the only problem being that I did not have a clamp as I had planned to hold the equipment out of the train window! But Tim quickly reappeared with his own bag of clamp parts and after some trial and error, we had a nice steady set-up for me to attach everything using a piece of cloth around the hand-rail to avoid damaging the paint-work.

Having spent quite a bit on new equipment, I was a little uneasy attaching it to the hand-rail but we agreed to put it on Maid Marian before she headed to the water tower so that we could check everything before she headed off down the line. After a short trundle from the yard to the water tower (for me and Maid Marian), the equipment was carefully checked to make sure it was extra tight and steady for the day ahead. At this point, Tim headed off to Llangower for his signalling duties and I was left to my own devices to collect sounds. I pressed ‘record’ for the first trip along the lake just before departure.

I briefly stopped the recording while Maid Marian ran round at Bala, then turned it on again (and luckily getting the front compartment on the train) for the run up Dolfawr Bank. On playback later, I was amazed at the high quality of the sounds and after getting a larger clamp later from Julian Birley, we attached the equipment to Winifred the following day.

A considerable amount of sound footage had been collected, some from the side of the track and some from the footplate where the crews were only too happy to oblige. I even managed to get some sounds of the diesel Bob Davies/’Trigger’ when Rob climbed on to the bonnet to help clamp the equipment for me, this being the same diesel where Dan found my lens cap after earlier photography!

After two days of lovely sun and much recording, I really did not want to leave, having met a lot of volunteers and chatted to crews as I was attaching equipment, the crews also obligingly pulling levers when requested. Everyone was so welcoming and accommodating, and I felt I almost knew everyone when I left. One of the many volunteers I interacted with and who was curious about the project was Nick Talbot, the editor of Llanuwchllyn Express (LE), the BLR Society magazine. I promised I would write a feature for the LE, so for more in-depth stories and funny moments from the couple of days, keep an eye out in LE.

For further updates on the Train Simulator 2021 Project, look for the ‘Bala Lake Railway Train Simulator’ on Facebook. More news will follow in due course but in the meantime here are some pictures to whet your appetite. 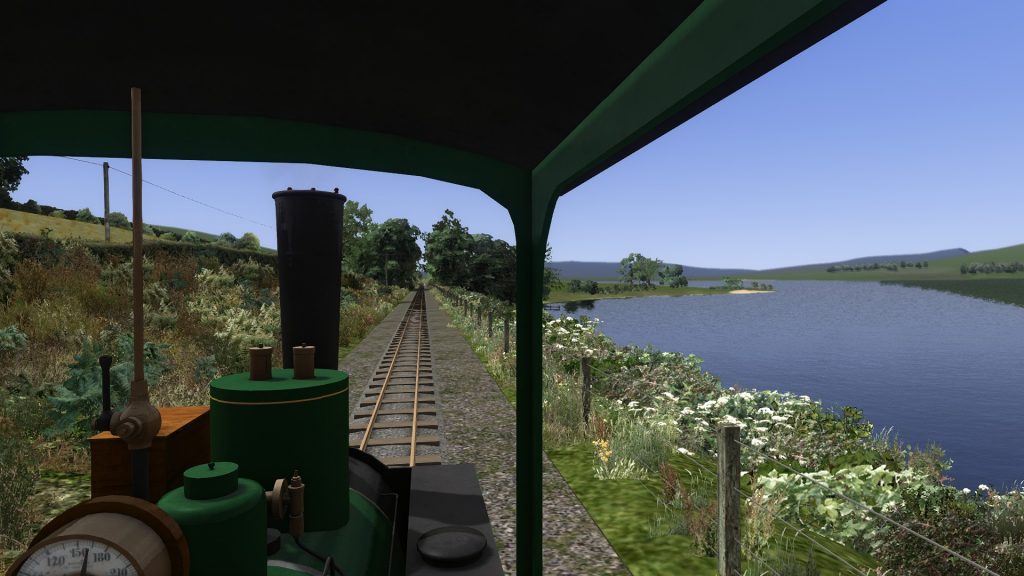 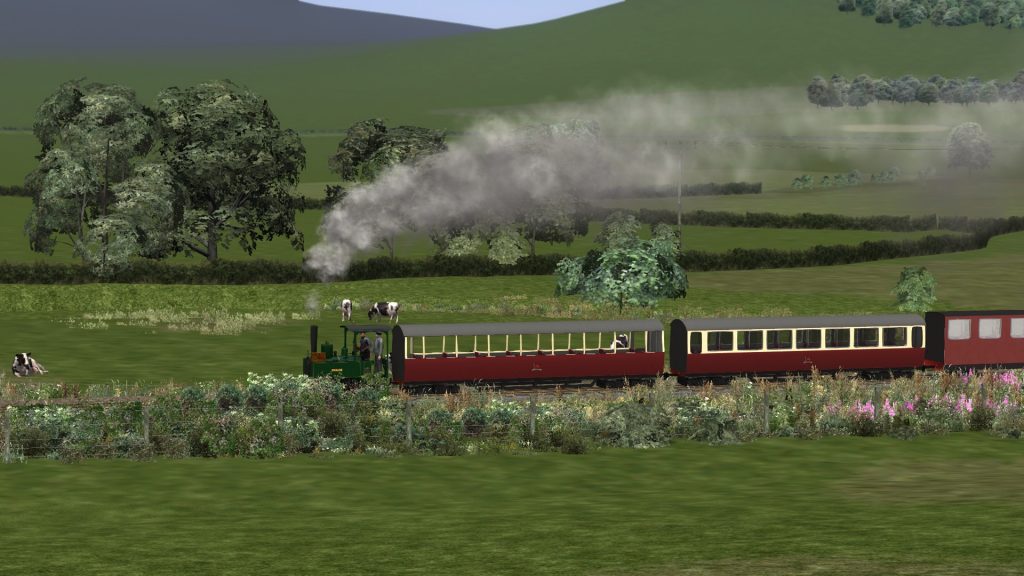 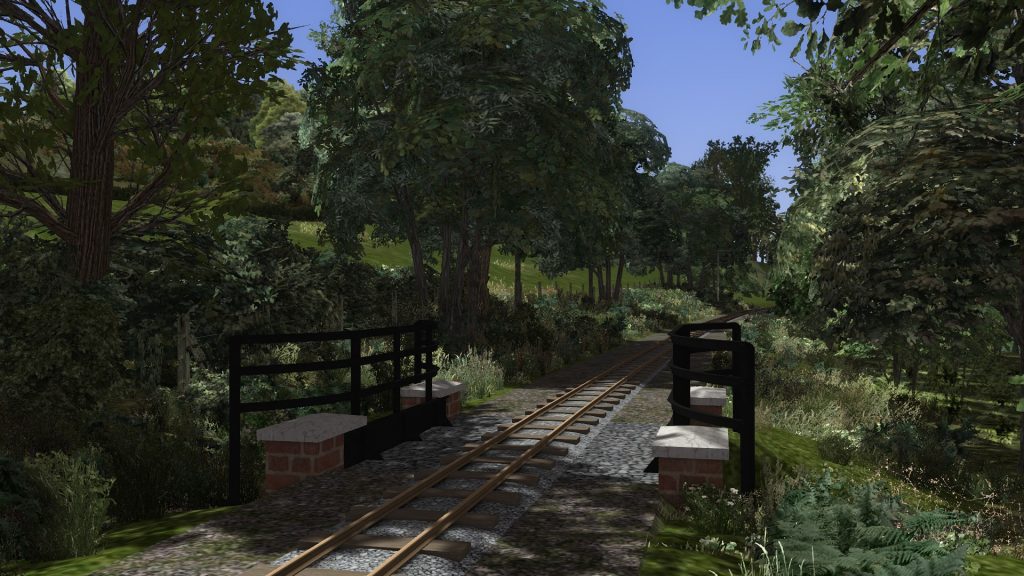 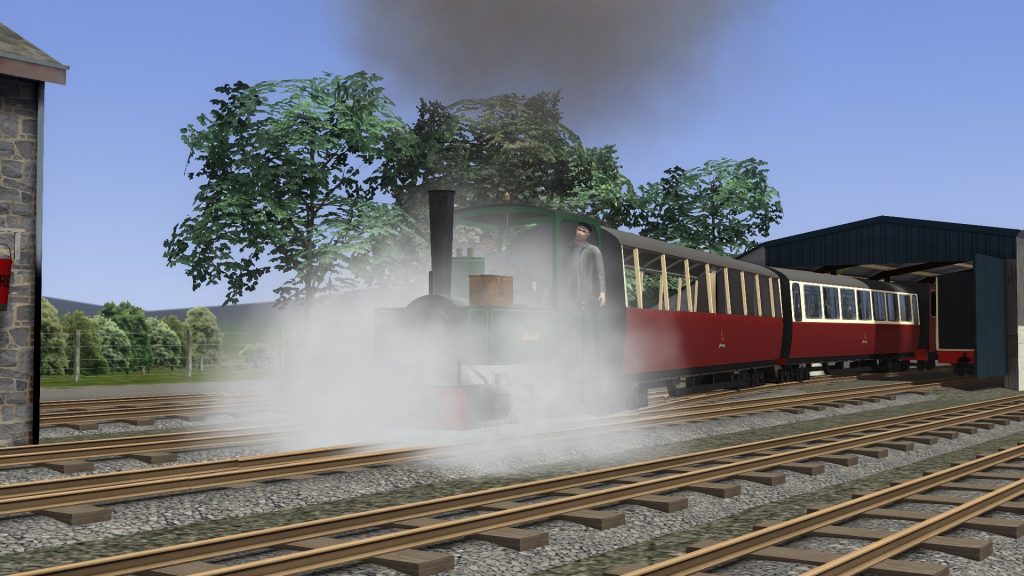 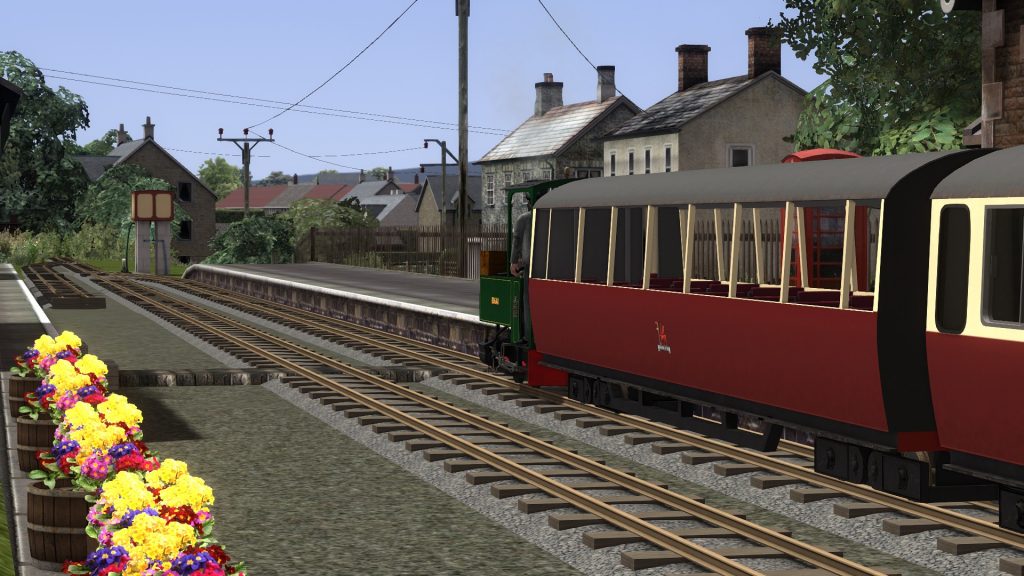 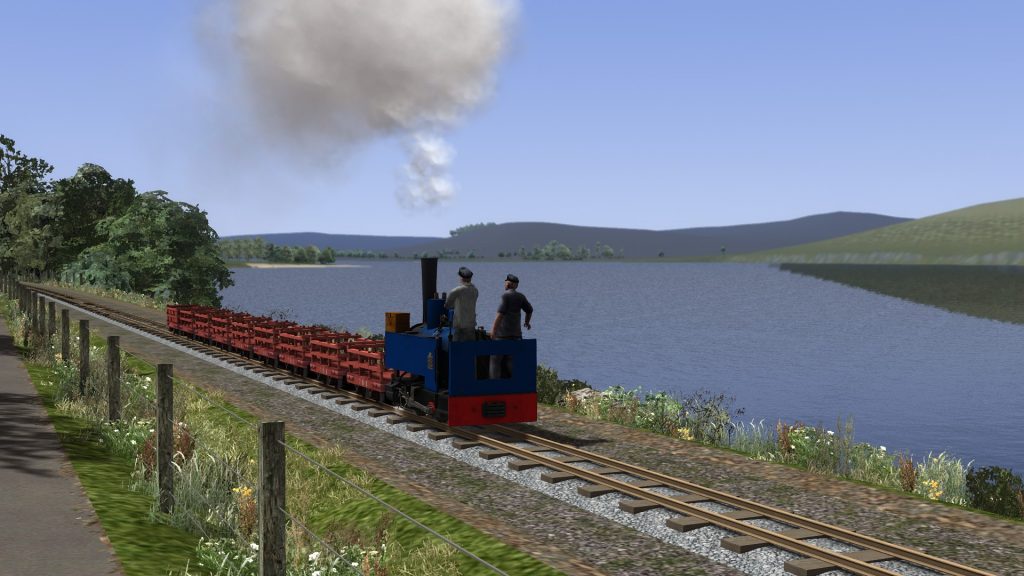 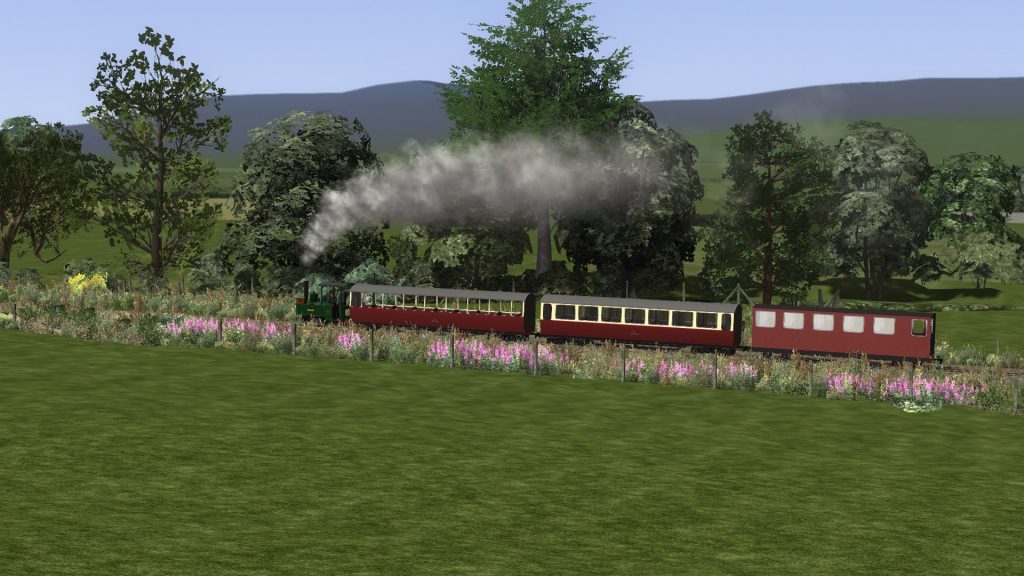 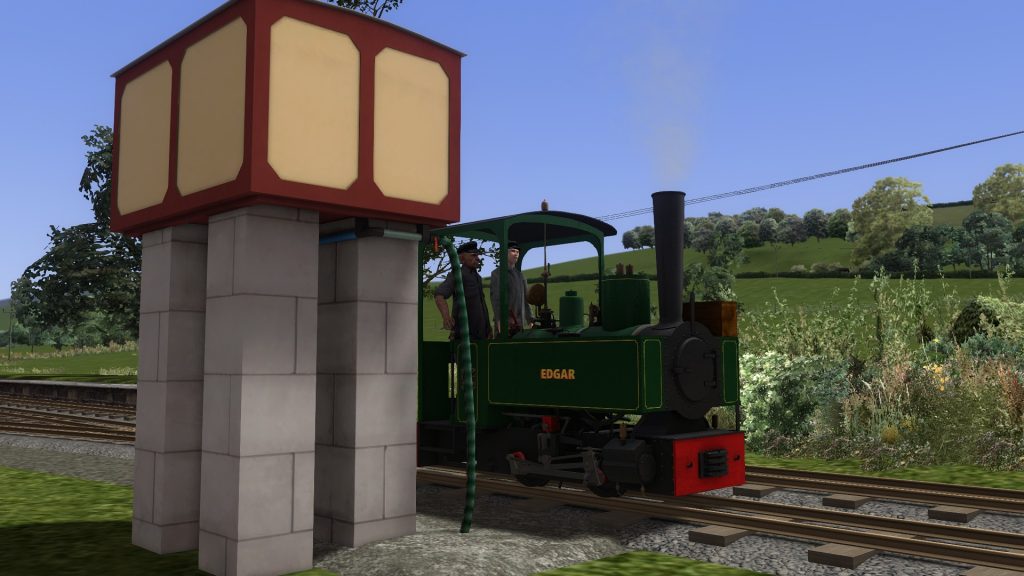 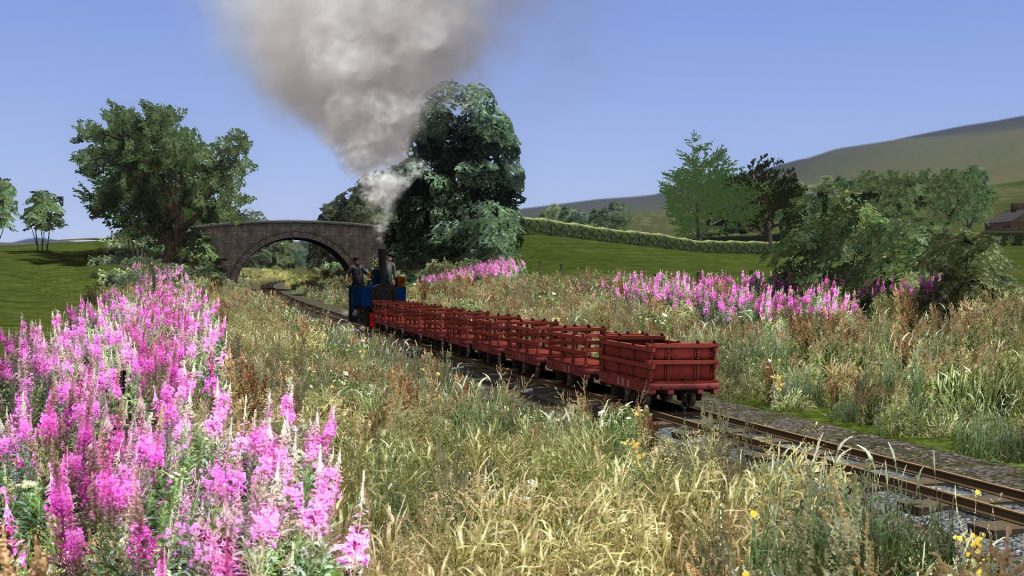 And finally…….. with all the other exciting things happening this year, here is an extra story which we were unable to include last month. The BLR collection of slate wagons had been feeling rather ignored so Francis Stapleton and Tim Williams recently brought out a rake of seven which was checked over thoroughly, one axle box being switched as unfit, axle boxes repacked with grease, the bearings oiled and made ready for action. When all was ready, the crew needed no encouragement to take them for a trundle down the line behind Maid Marian. By nature, these wagons are very noisy and chatter away incessantly but the trip did them the world of good with their cacophonous progress up Dolfawr Bank on their way home being recorded, a delightful chorus and an inspiring sight.