The BLR General Manager was almost beside himself when announcing the passenger numbers for September, the figures being 57% (no, not a misprint, fifty-seven percent) up on the previous best September, with full trains being operated almost to the end of the month. He added that the railway numbers are almost 4% up on the previous best year (2019) in spite of the railway not being open during February, March and April. No wonder there is a palpable sense of ‘we got it right’ with everyone concerned.

But the year is not finished by any means. Our Wednesday Gang activities are starting so that any problems noticed during the summer can be rectified (volunteers always welcomed), and our planned Diesel Day on Sunday 17th October promises to be quite something. Passenger trains will be hauled by Bob Davies (aka Trigger) with Meirionnydd hauling the Penrhyn quarrymen’s open coaches plus Chilmark is to double-head with one of our steam locos, a very rare sight indeed. On top of all that, demonstration freights will be on the move with Chilmark, Murphy and Lady Madcap. Please click here for details of the timetable and day rover tickets.

After quite a while where very little progress has happened because of the pandemic, the Penrhyn Coach received some serious attention during the month when it was moved from the carriage shed into the warmth of the loco shed. 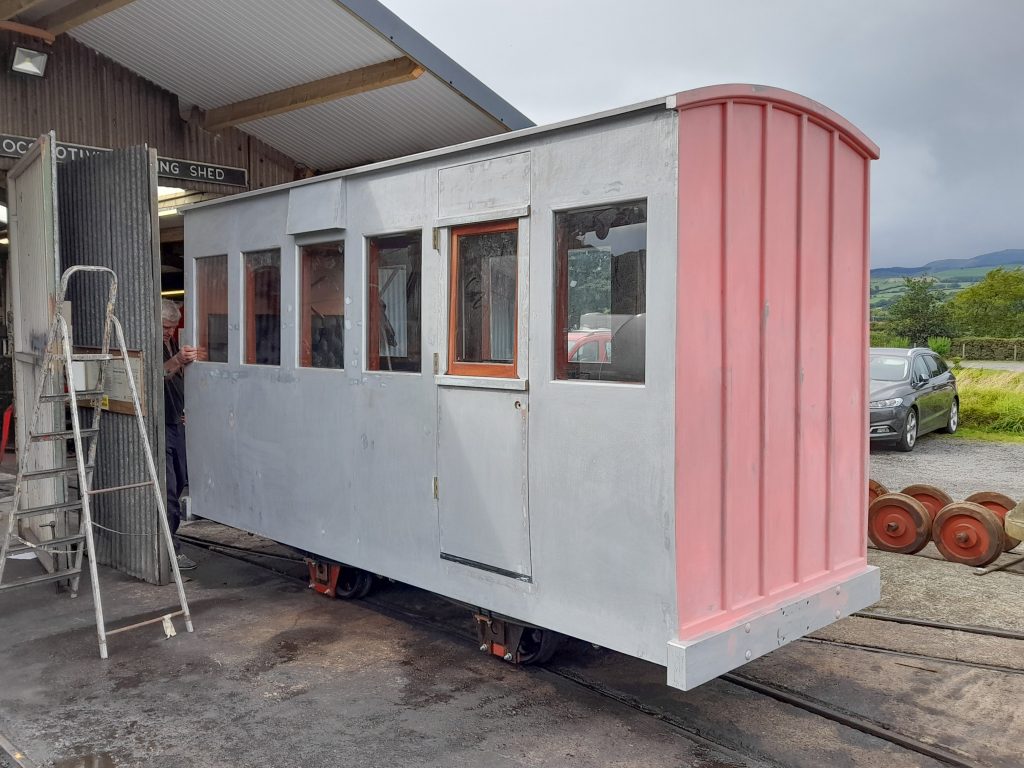 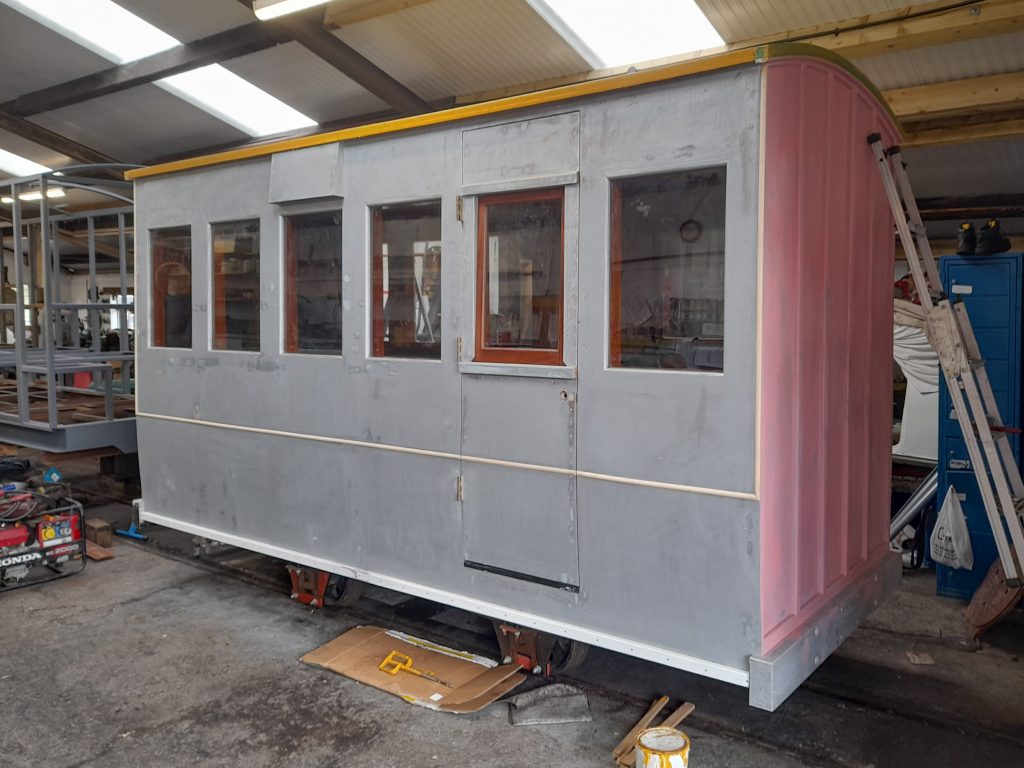 Our annual Volunteers’ Recruitment Day, where prospective applicants are shown over as many facets of the railway as possible in one day, was a resounding success. With a manageable number of 8 people, the group introduced themselves and were then given a detailed briefing by General Manager David Jones about the necessary safety aspects and awareness, after which they were allocated various departments to investigate.

Russell Prince, he of the flamboyant waistcoats and who has run these successful days for quite a while, reports:

September 12th was a further chapter in the realms of the Volunteer Recruitment Day which dawned with Winifred being lit for use by the prospective volunteers during the day. We had a full complement of eight participants, this number being perfect for maximising what those involved can get out of the day.

During the day, everyone got to sample the workings of the Llangower signal box, a footplate ride, a ride in the Penrhyn Coaches to Llangower where they operated the ground frame as the locomotive ran round its train. They also sampled the role of the guard as well as digging out and replacing sleepers in the coal wagon siding all in all a very varied day.

Such an impression was made that two of the people attending (a husband and wife team) stayed on until the middle of the following week, helping out around the railway. How is that for an instantaneous result?

One of the delightful aspects of railway life is getting involved in local activities. Regular readers will recall the almost yearly Race-the-Train event where paddle-boarders set off from Llangower to the finish line at the Bala Sailing club near the current terminus. The results are always remarkably and surprisingly close.

During September, the BLR assisted with the Bala Big Swim where over 140 swimmers were taken from our Bala terminus at 10.00 on a special service, thus not inconveniencing the normal schedule, and were dropped off at Llangower for the swim back to Bala. 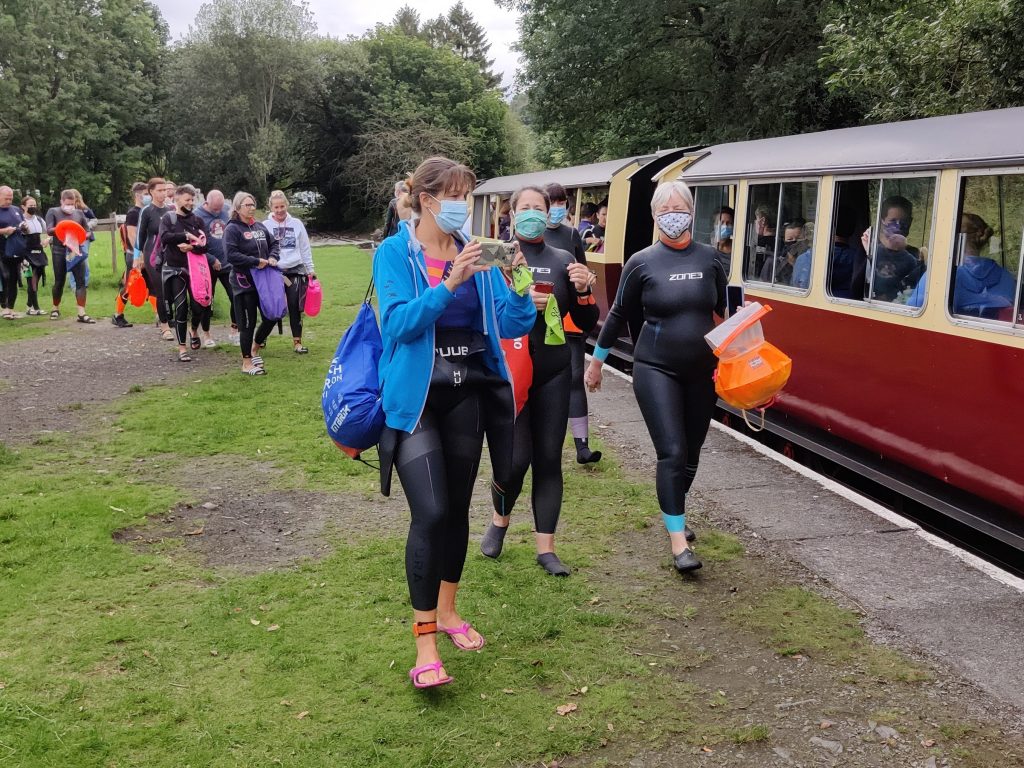 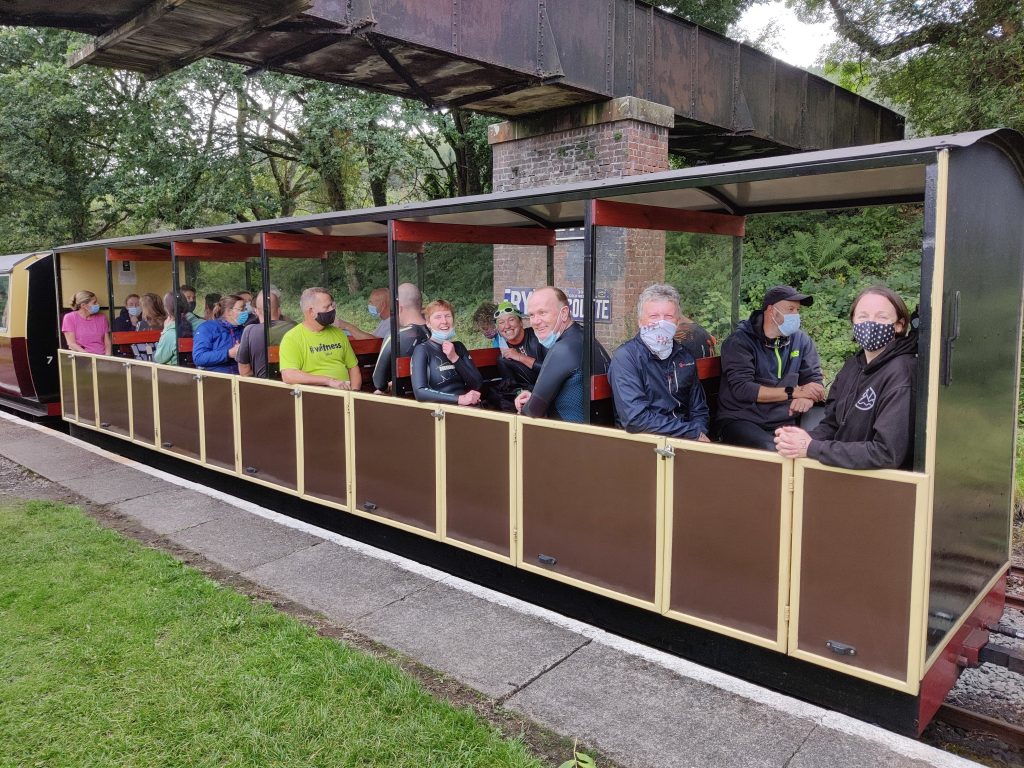 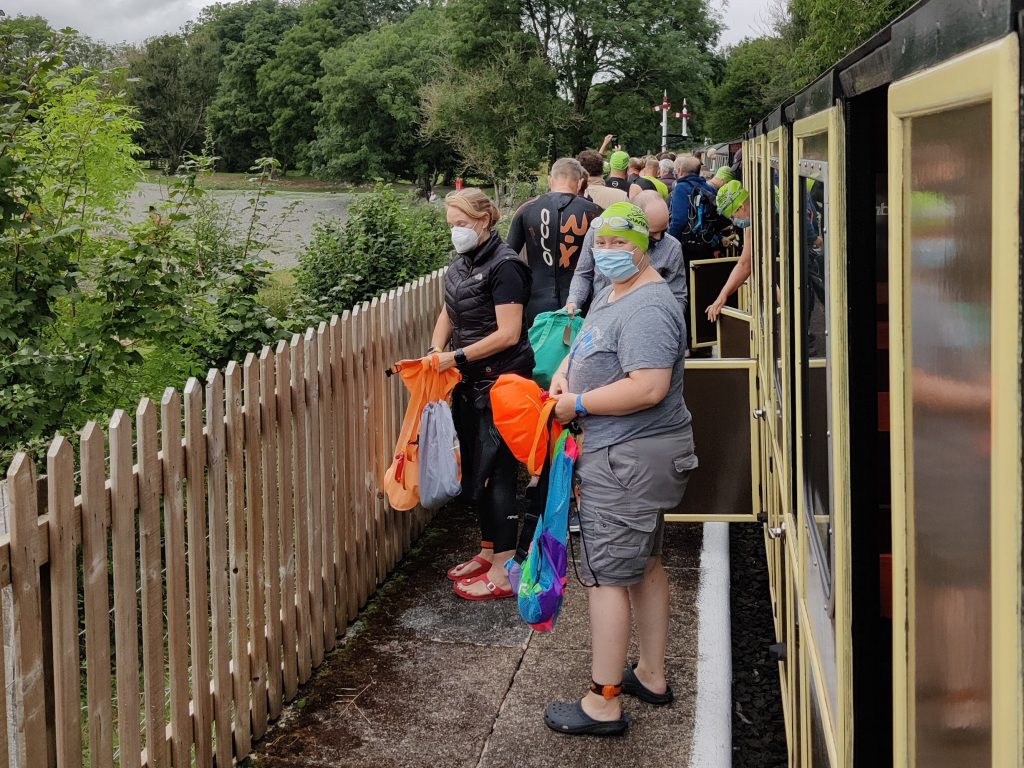 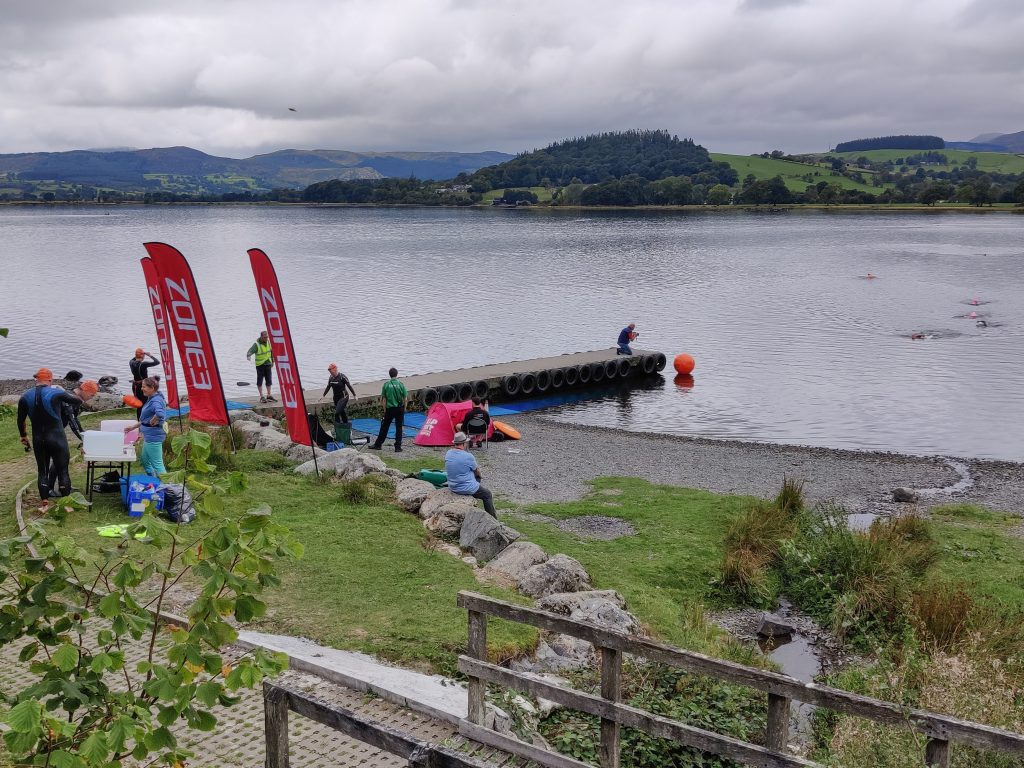 It was all a resounding success and typifies the way in which the railway and the town work so well together. With the new terminus available in down-town Bala, the whole event will take on even more significance.

The Bala Lake Railway Society held its annual general meeting, as will be reported in Llanuwchllyn Express, its excellent quarterly journal. It is a delightful tradition that the Society also decides to form some different trains to accompany the scheduled services and this time, two of the Penrhyn Quarrymen’s Coaches were coupled up while a small rake of skip wagons was coupled to Chilmark, one of our Ruston & Hornsby diesels. Having extra movements provided some interesting tasks for the signalmen at Llangower but naturally no complications arose and the visiting public and photographers enjoyed the spectacle.

Coincidentally, a car rally which had started from Powis Castle outside Welshpool descended on Llanuwchllyn during the Sunday morning and a very eclectic group of cars appeared, ranging from ‘humble’ mk1 Escorts and Mini Coopers to include an elegant Alvis, a brace of Triumph TR3s, E-types, a growling mk2 Corvette (probably quite a handful on damp narrow roads) and the piece de resistance, an Aston Martin DBR1, albeit on a non-original registration plate. Were it to be genuine, it would command a seven figure sum but the consensus of opinion was that it may have been a recreation on a more modern donor chassis. Either way, it was visually accurate and a spectacular addition to the fleet. The crews had only a few minutes for coffee and comfort breaks before heading off on their noisy way again. 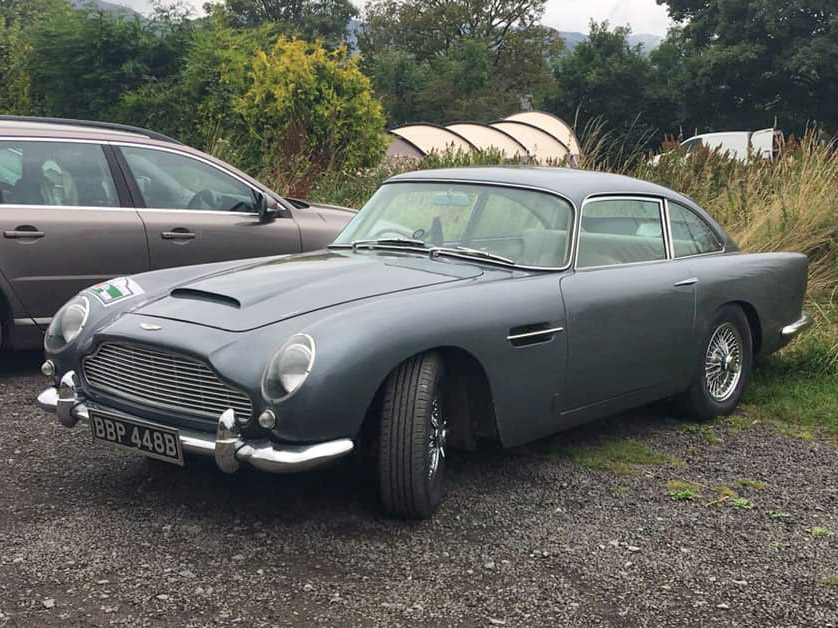 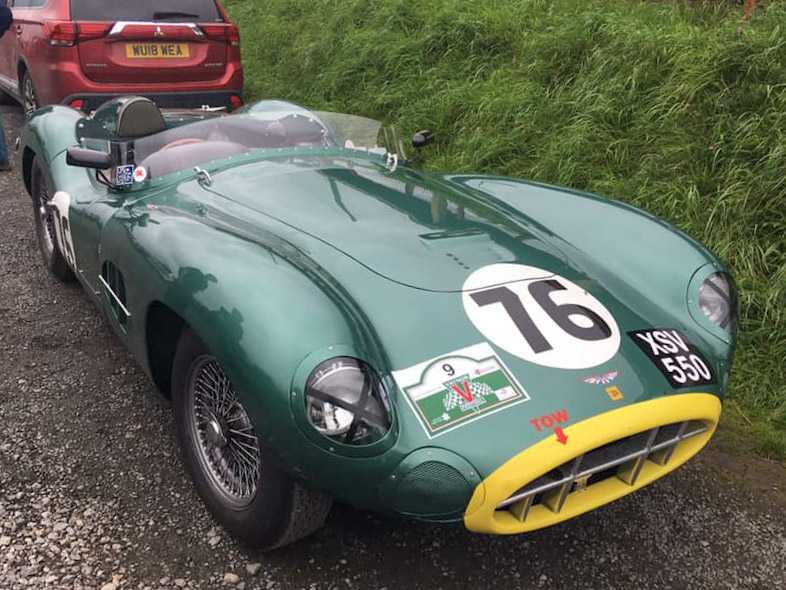 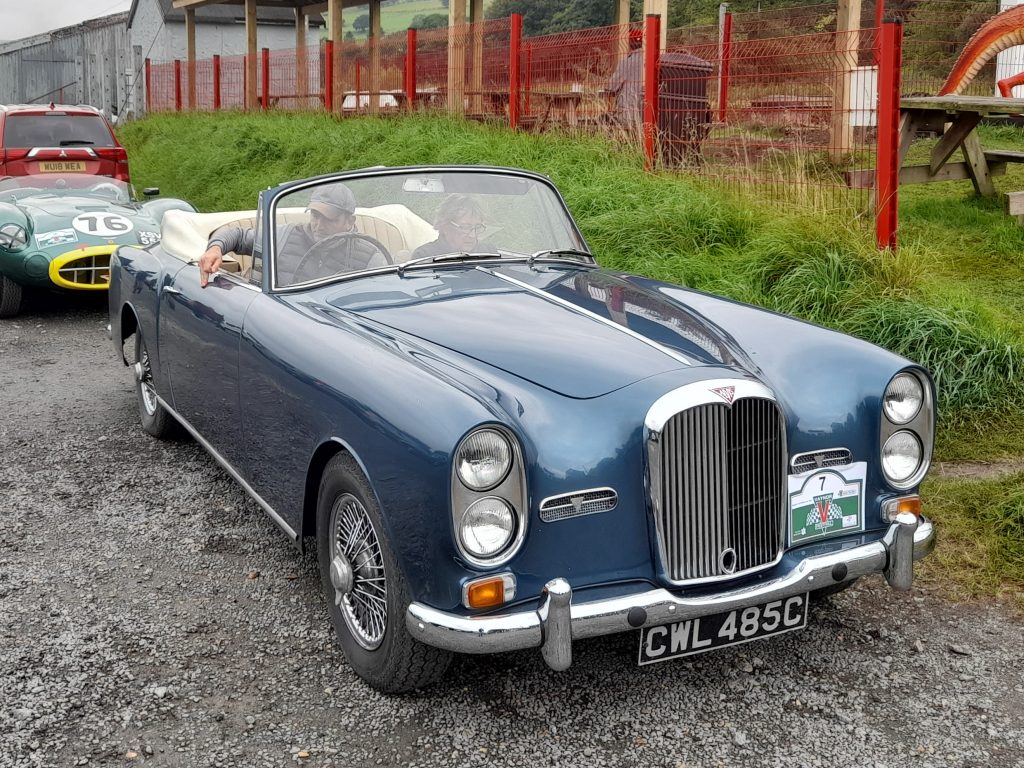 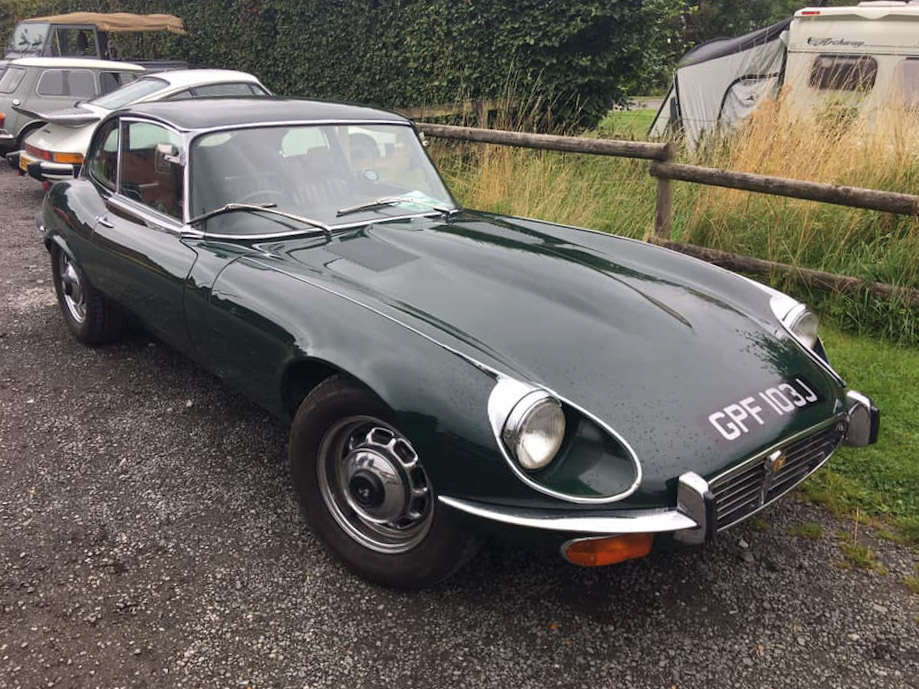 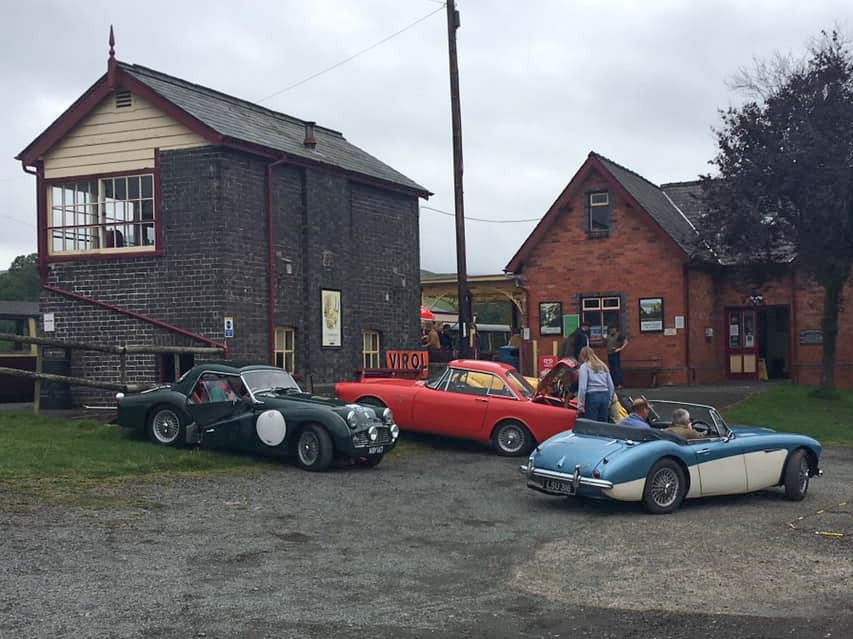 News of the Avonside is that the boiler has been removed to a local engineering firm, not to be renovated but to be copied, the existing one being far too deteriorated for economic rebuilding. This is another exciting development and while the boiler will be dealt with locally, the owners, John and Hilary Moorhouse, continue to work on the chassis and ancillaries at their base in the Midlands.

Many will have noticed on the news-stands a new railway magazine called Trackside. This appealing new publication strives to look at railway heritage from a more adventurous viewpoint and the word is that it has already gained a substantial readership. During the month, one of their senior contributors, Tony Streeter, was invited to the railway, mainly to inspect the Extension developments and talk at length with Julian Birley. Tony is a well-known name in the world of railways and heritage activities, having at one stage been the editor of Steam Railway magazine. He spent a couple of days at Llanuwchllyn and enjoyed what he saw of the railway and its developments since he last visited a few years ago. He was also given a very detailed lecture walk along the proposed extension route by Julian Birley which features prominently in the November issue now available.

While on the subject of publications, a new DVD has just been released and features the Bala Re-Railed event, the entire production by noted film-maker Michael Field who cleverly keeps the commentary to a minimum and lets the scenes do the talking.

The Bala Re-Railed part of this 52 minute film covers the event itself and captures the atmosphere very well with lovely well-edited clips. Winifred is seen with several drivers and crew, most notably Russell Prince who was sporting a Welsh flag waistcoat. Other lineside shots roamed around the site capturing the variety of attractions.

Away from the event, the film is very informative as it follows Julian Birley on one of his lecture walks along the route of the planned extension and, with his practiced and engaging delivery, highlighted the phenomenal amount of detail and paperwork with which he has had to contend just to get to this stage.

The rest of the film contains some of the best tracking shots to be found, particularly of trains climbing Dolfawr Bank, be they long panoramic shots from the hillside or those next to the track. You cannot help but smile as they capture the wonderful views and beauty of the scenery. This DVD is now available through the BLR station at Llanuwchllyn and will be added to our online shop over the next few days.

And finally..... on a theme of ‘people and places’, a BLR volunteer was recently on holiday in the north of Scotland and ventured into a stationery and art shop in Mallaig. His choice of apparel, a BLR fleece, was quickly noticed by the proprietor who immediately quizzed him about how the Bala Extension was progressing, the interest prompted as he is a volunteer on the Strathspey Railway which has its own extension plans. The proprietor stated that the progress of the BLR Extension had been carefully watched by many in the press, thus it is heart-warming that the efforts being made to reach Bala Town again are being watched and supported by people the length and breadth of the country. Our volunteer also commented cryptically that after the amount of rainfall over a 48 hour period in Scotland, he will never grumble about Welsh liquid sunshine again!

On another heart-warming note, a little girl lost her sunglasses from the train in June and politely asked the driver to look out for them. She graciously said that should they be found, they should be given to a deserving recipient. A while later, she received a package from the railway containing her errant sunglasses, a nice letter and a brochure about the railway, the BLR at its best!

STOP PRESS: To Dan Laidlaw, Deputy General Manager of the BLR and his lovely partner, Caz Williams, a son Arthur. Staff, friends, volunteers and all who know them send their congratulations and best wishes.