Half-term fell very handily upon the last week of the month, hence visitor numbers to the railway were impressive – just over 100% up on our previous best. Trains were very busy, and particularly the Halloween trains on the 29th and 30th which were fully booked on both days. We can still hear the screams of those who attended! This tops off what has been our best season to date, despite missing the first three months of the year. Thank you to everyone who came to visit us and hope to see you again in the future. 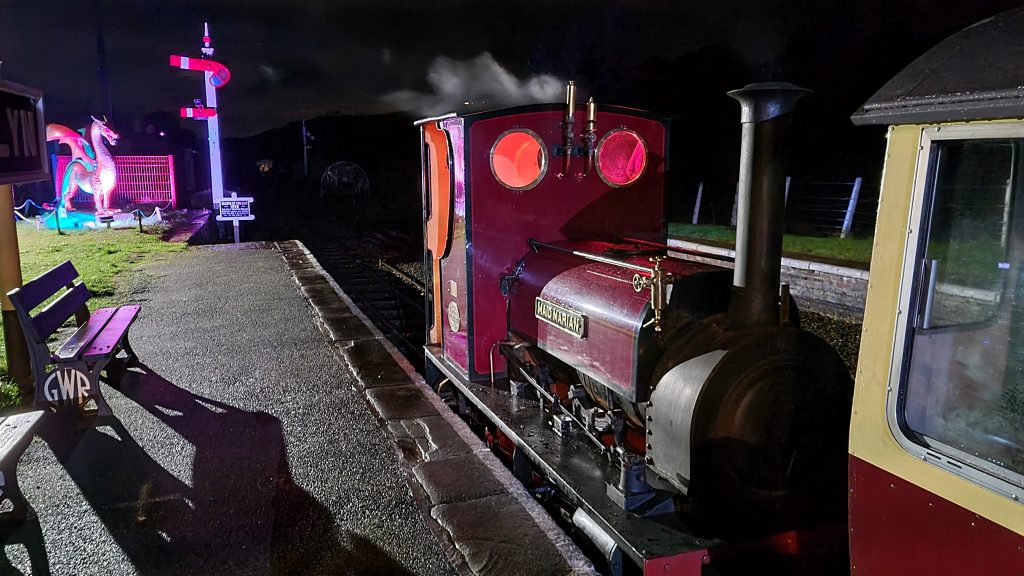 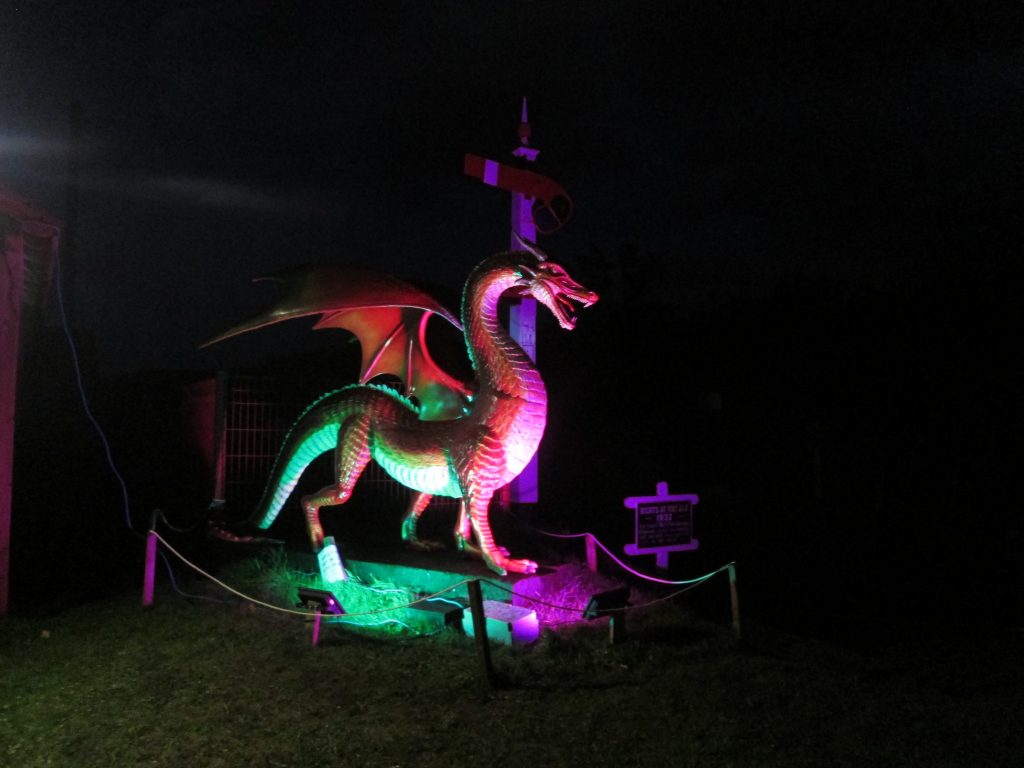 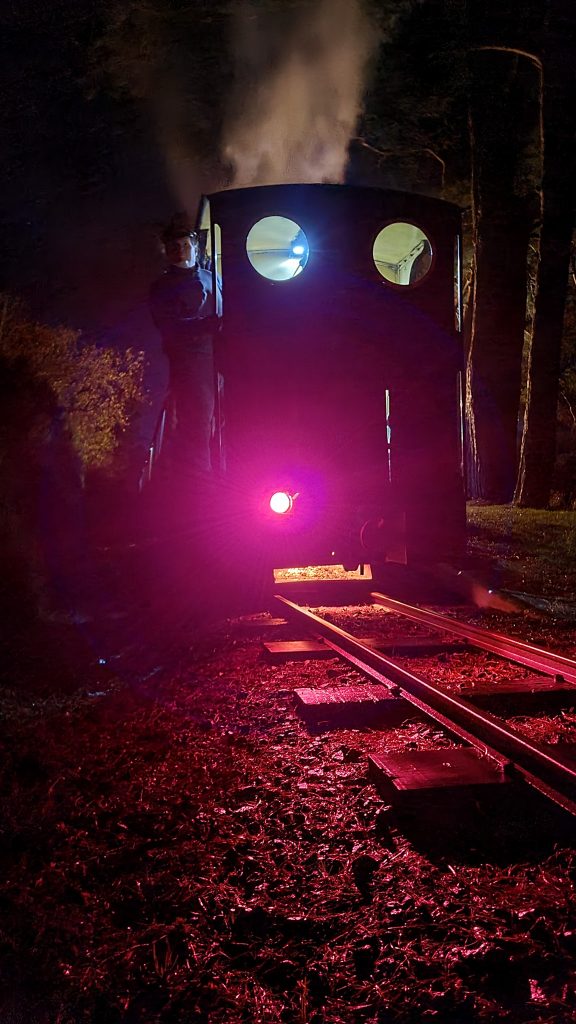 But this was not the only successful event of the month. On Sunday 17th, the BLR hosted our first ever Diesel Day as homage to our alternative and frequently overlooked means of motive power, and it was a great success as on this occasion, all five diesel locos were out and about, including a veritable ‘first’ for the railway, a double-headed train with Chilmark, our Ruston & Hornsby ex Air Ministry loco teaming up with Hunslet Winifred for the final service of the day with the two owners on hand barely able to suppress their pride. Photographers in droves gathered at both ends of the line to record this quite extraordinary pairing, and others were noted line-siding along the length of the lake. Just to show that she was far from the weakest link, Chilmark actually hauled the entire train away from Bala with Winifred doing no work at all for the first few hundred yards, such was the close co-operation of the loco crews. The photographers were probably blissfully unaware, apart from the noise of Chilmark’s engine working somewhat harder than usual.

The railway’s main diesel Bob Davies, aka ‘Trigger’, had a relatively quiet day after taking the first train to Bala and back, whilst the other three were put to effective use. The railway’s other R&H, Lady Madcap, was attached to a small rake of slate wagons, Meirionydd was in charge of a pair of the Penrhyn Quarrymen’s coaches which proved predictably popular with the passengers and the most recent arrival, known to all as simply Murphy, in honour of the firm which donated it to the railway, was coupled to a rake of skip wagons. Murphy, as readers may recall, is a Schӧma employed by contractor John Murphy and Company for building the Cross-Rail Project and uniquely in this gathering is powered by an air-cooled Deutz diesel motor. It also is much more modern than its stable-mates and features a completely different (and to the untrained eye) perplexing panel of controls, albeit quickly mastered by Chief Engineer Rob Houghton and Dan Laidlaw who kindly appeared to assist on the day after the joyous recent arrival of his son. 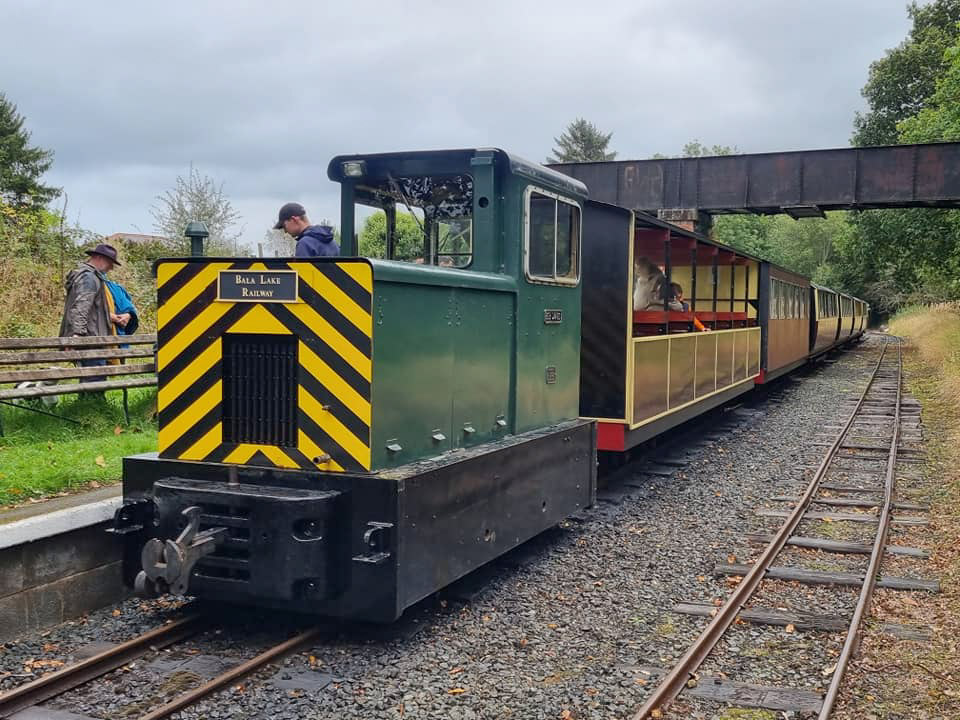 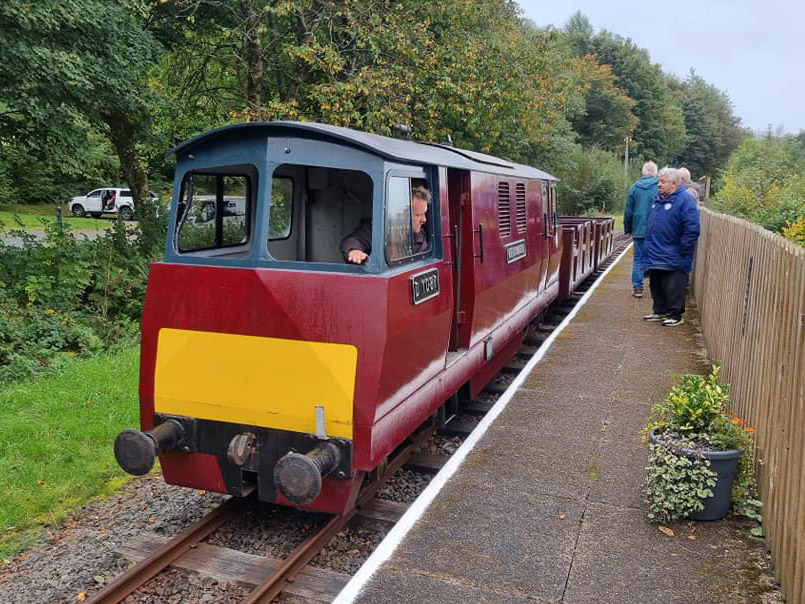 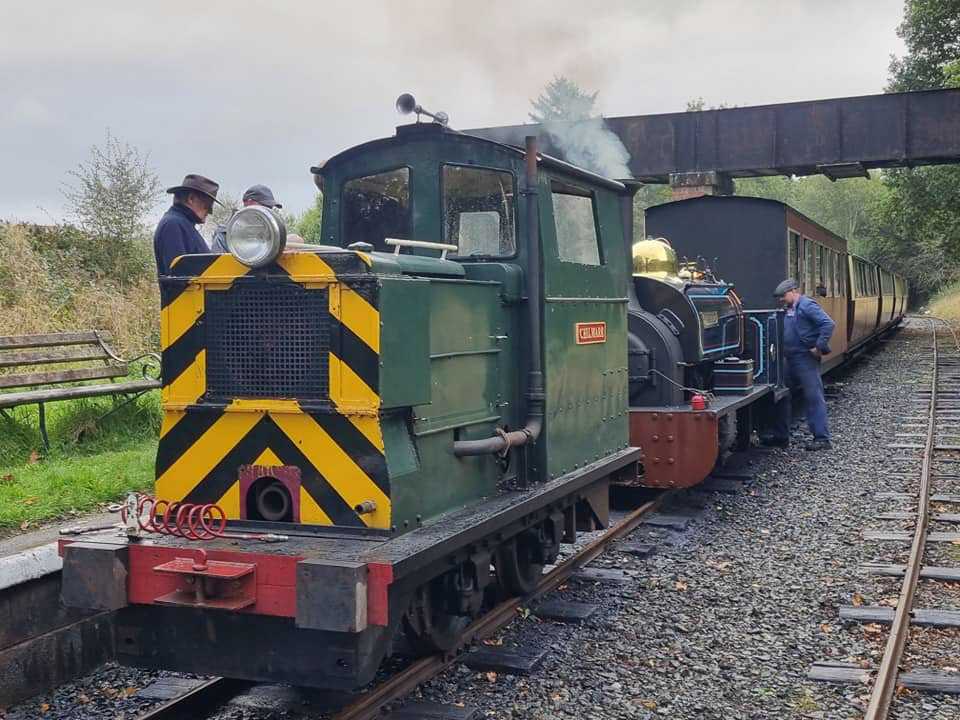 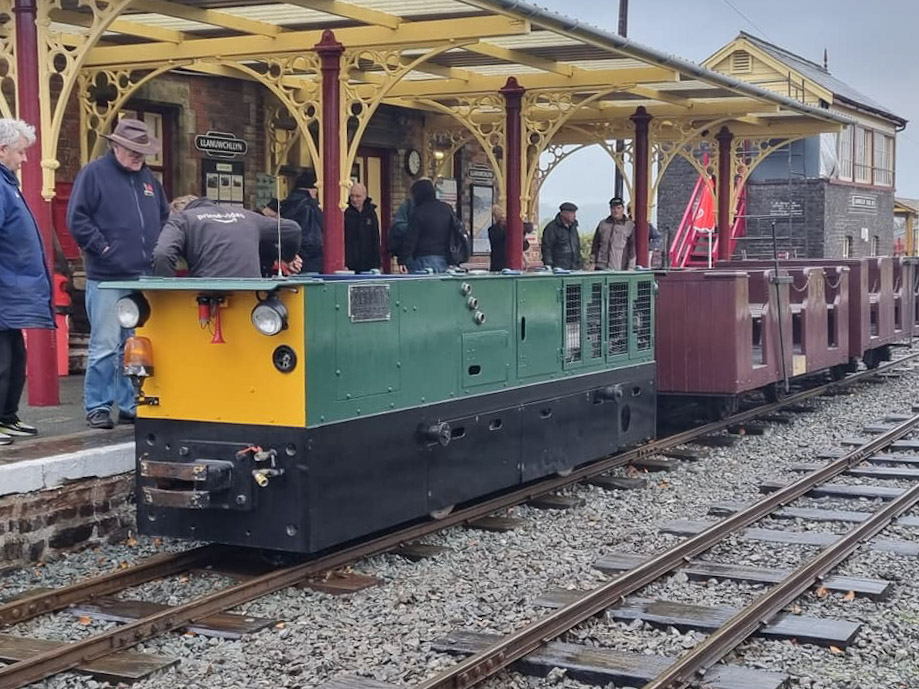 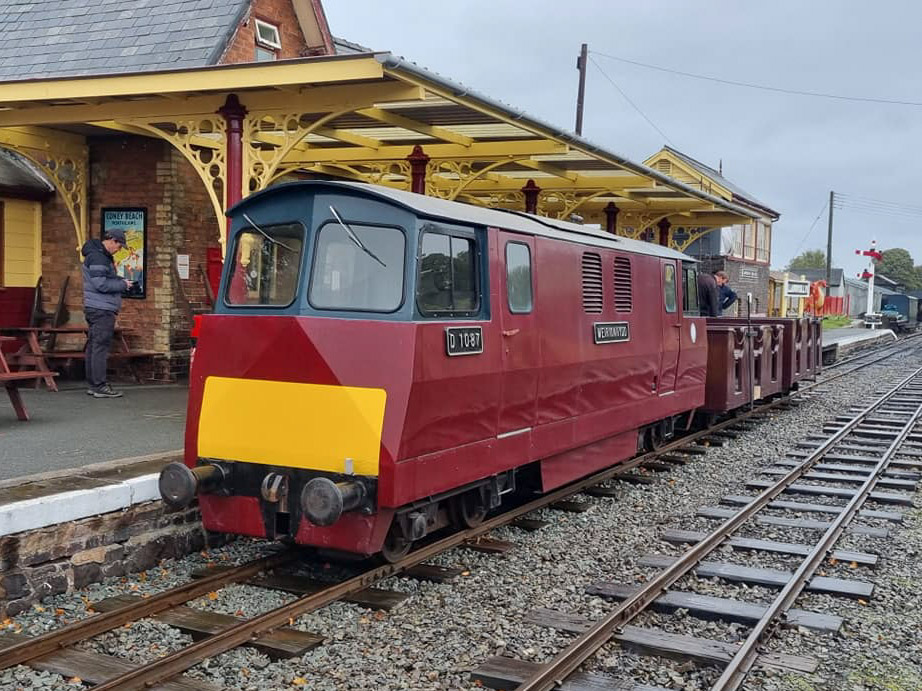 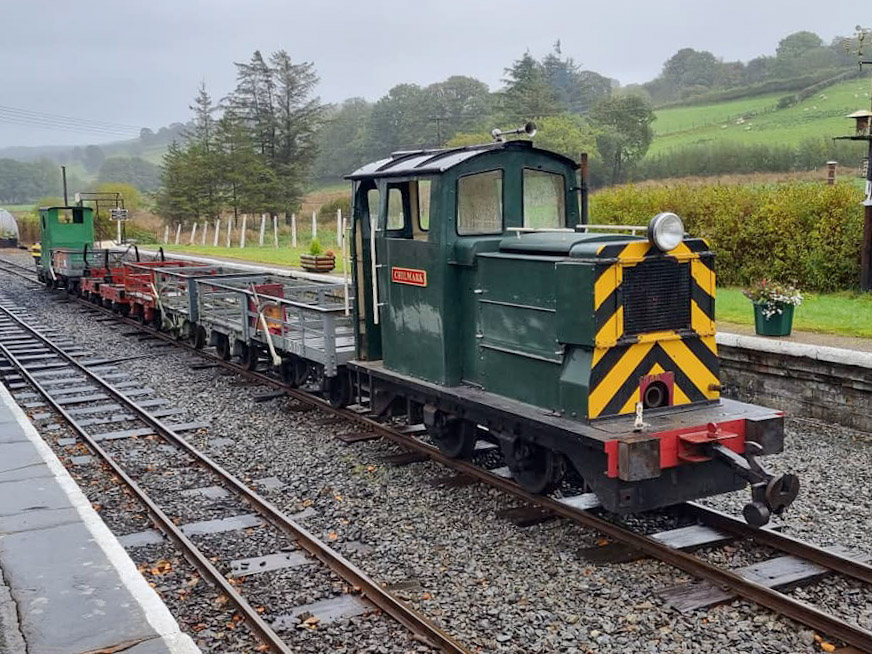 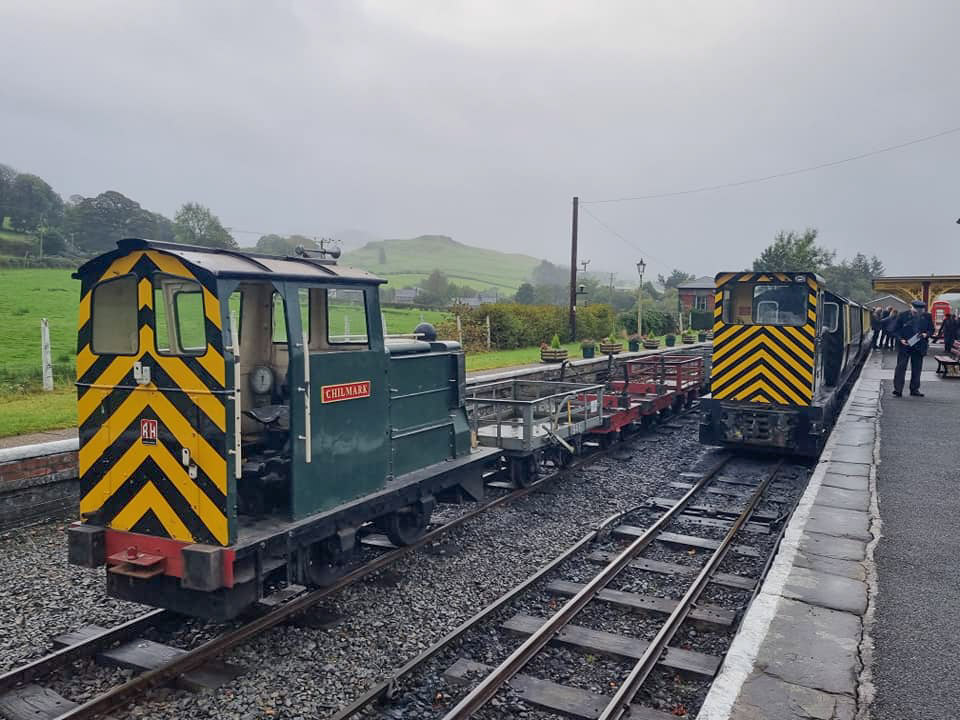 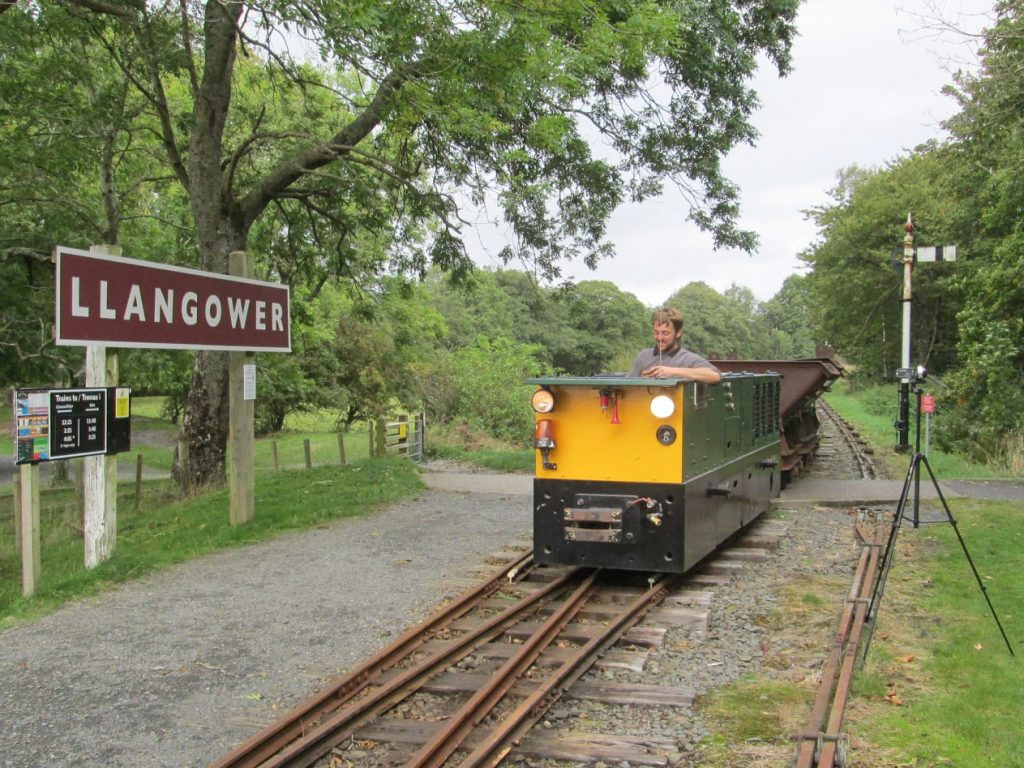 All in all, Diesel Day will pass into the year’s history as an extremely successful day where the alternative to steam ruled for once and brought the railway’s delightfully eclectic ‘fleet’ to the fore. Judging by the number of photographers snapping the various locos in action, the event is surely to be repeated.

The BLR is in no way finished with events this year and the final one will be the Mince-Pie Specials to take place on the 11th and 12th of December. Rather than the originally titled Santa Specials, they have had to be renamed to fall in with Covid restrictions still very much in place in Wales but the spectacle of a wintry scene at Flag Halt can be expected, perhaps with some genuine snow, such is the unpredictably of the weather these days. Departures will start at 11.30 and will until the last train at 18.00 (16:00 on Sunday). Click here for further details and to book.

Additionally, on the 7th November we are hosting a photo charter and on the 14th November, there will be a special charter for the Branchline Society where almost every inch of track is covered by dedicated enthusiasts. We will report in detail next month.

During the ‘quieter’ months over the winter, life on the railway gets distinctly frenetic for the maintenance staff and volunteers because there will be an enormous amount of work to be carried out. To this end, General Manager David Jones has produced a most detailed schedule covering the next five months, encompassing such activities as tree-pruning, work on the carriage stock, track relaying, culvert repairs, not forgetting work on Alice and Holy War who are still undergoing extensive 10-year strip-downs. This is all in the internal document which contains numerous other tasks to be tackled but it illustrates graphically not only the perennial work that is carried out during the winter months but also highlights how well organised the management is at seeing exactly what needs to be done. Factoring in the Mince-Pie Specials in December plus Half-Term Passenger services from 19th to the 27th February next year and you will appreciate not only the workload but the concise and vital forward planning.

News of the Avonside loco, a fascinating project in the wings, is that the boiler has been removed to a contractor ‘over the hills’ (locally) which will use the old but unrepairable one as a pattern for the new creation. In the meantime, owner John Moorhouse has been busy at his Midlands base where he is painstakingly renovating the frames and motions. He reports in delicious detail:

Work is progressing steadily with the restoration of 1909.

The frames have now been thoroughly cleaned and rust removed by needle gunning, wire brushing and grinding and the entire corroded running plate and cab floor removed. Wasted areas on the top edges of the frames have been cut out and new sections of steel welded in place.

The running plates have all been replaced with new angle and plate, cut to shape, fitted around the cylinders and drilled ready for bolting down. Dome headed bolts will be used instead of the traditional rivets; I don’t have the facility for riveting! Similarly, the cab floor has been cut and fitted, holes still need to be drilled to secure in place. Once all the plate work is complete, it will be thoroughly cleaned and painted before final assembly. 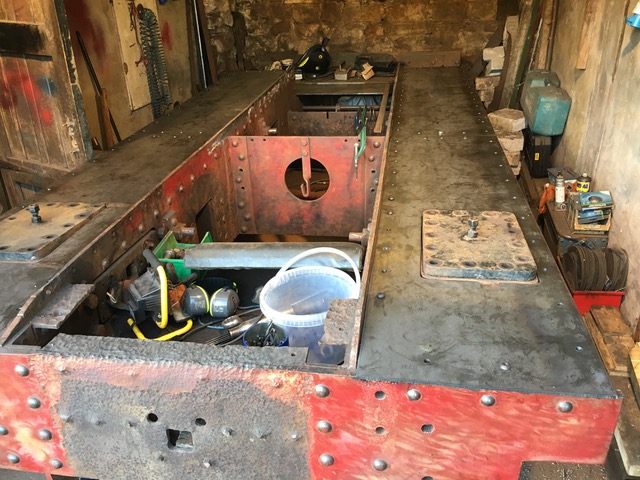 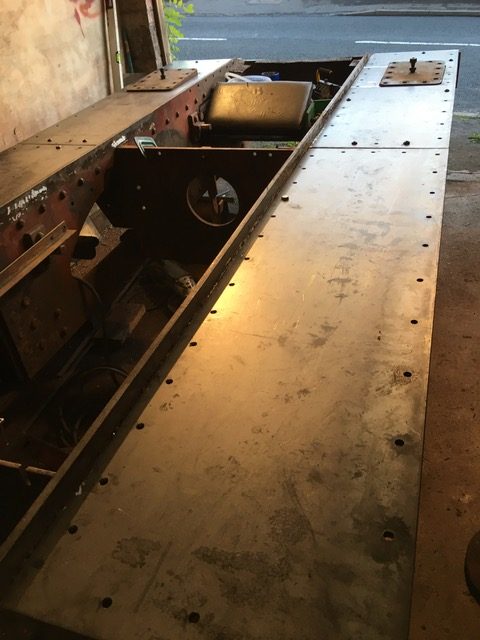 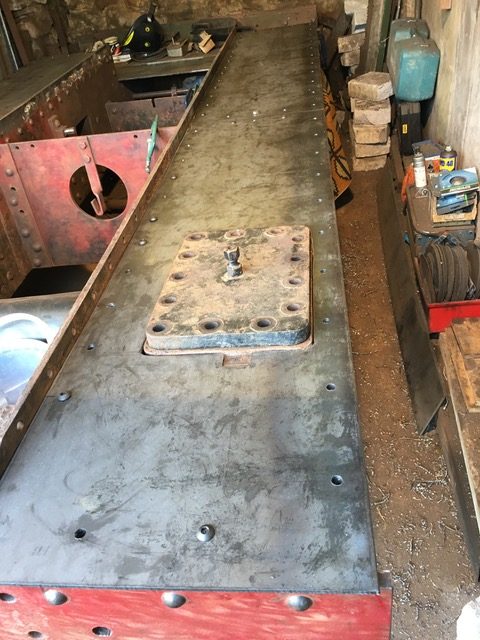 The cylinders had some corrosion in the base of the bore due to water entering via the corroded steam pipes whilst the loco stood for some 50 years. These have been removed, rebored and partially refitted. A few of the fitted bolts were corroded and require replacing. The wheels have been cleaned and prepared for tyre turning and a start has been made cleaning and checking the motion. First impressions are the majority of bushes and pins are in remarkably good condition.

As reported briefly last month, the old boiler has gone to be used as a “pattern” to assist with the production of a new boiler. The boiler wasn’t original but was built by Perry Engineering in Australia in 1937. Some parts could have been used again but the boiler was longer than the original and the firebox was 125mm higher which made the loco look out of proportion and with a higher centre of gravity may have contributed to an unfortunate accident when 1909 ended with “wheels in the air”. 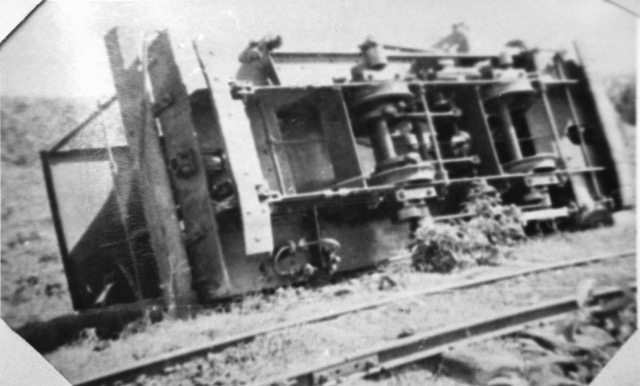 The new boiler will be similar in size to the original Avonside, fully compliant with modern day standards, of welded construction but using traditional methods where visible i.e. firebox back head, throat plate and foundation ring. New Engineering drawings are being prepared together with material specifications and calculations to be submitted for scrutiny and final certification. Material is being sourced and a start has been made with the machining of certain parts.

Fortunately all the original Avonside boiler fittings were used on the Perry boiler and they have been removed for refurbishment and future use on the new boiler.

And finally……… volunteer Aaron Thompson has been developing a ‘virtual’ BLR and we attach the first offering from his creative mind of a virtual Alice using sounds recorded earlier in the year for the simulator by Dane Forth. These first efforts could become a very appealing aspect of railway life.

To end without explanation, Marian upon Marian. 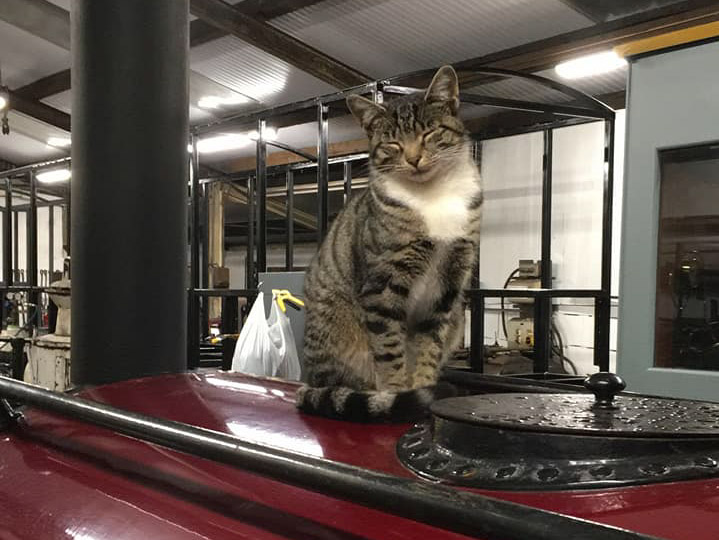