As this is written (10th May), a film crew from the Welsh television channel S4C is constructing their piece for the evening magazine programme ‘Heno’ about the BLR 50th anniversary celebrations (broadcast 7:00pm 11th May). Filming has taken place along the best and most scenic sections of the line, in particular facing the bottom of Dolfawr Bank where the long panoramic shots capture the little engine working quite hard with the azure blue of the lake in the background. 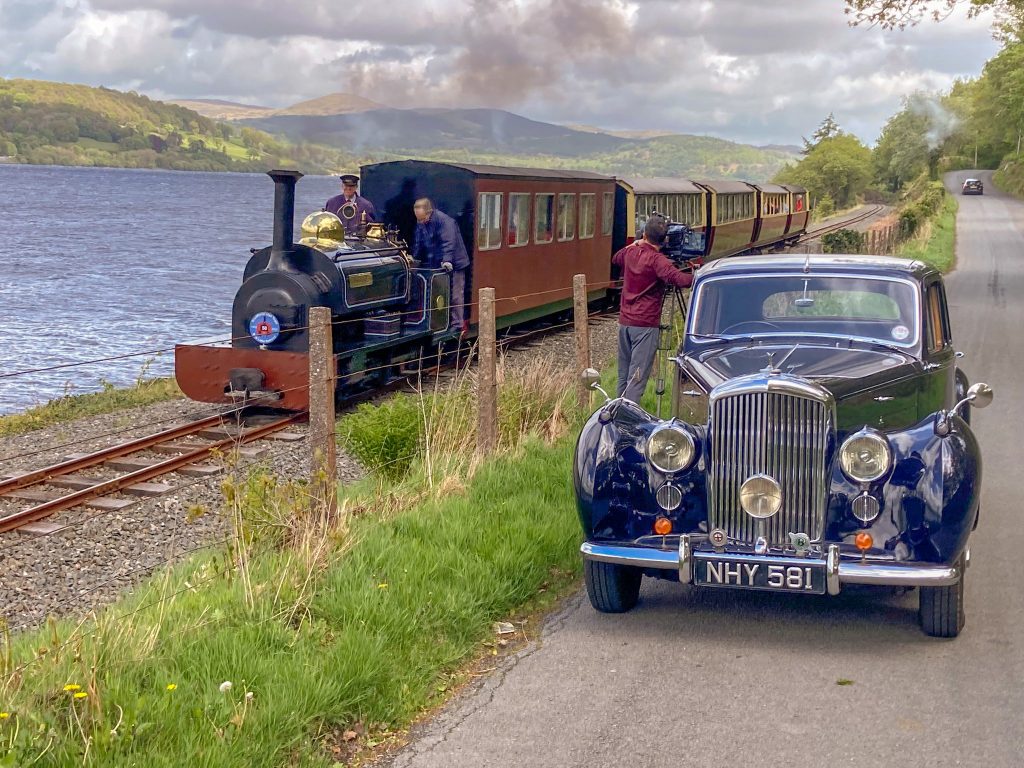 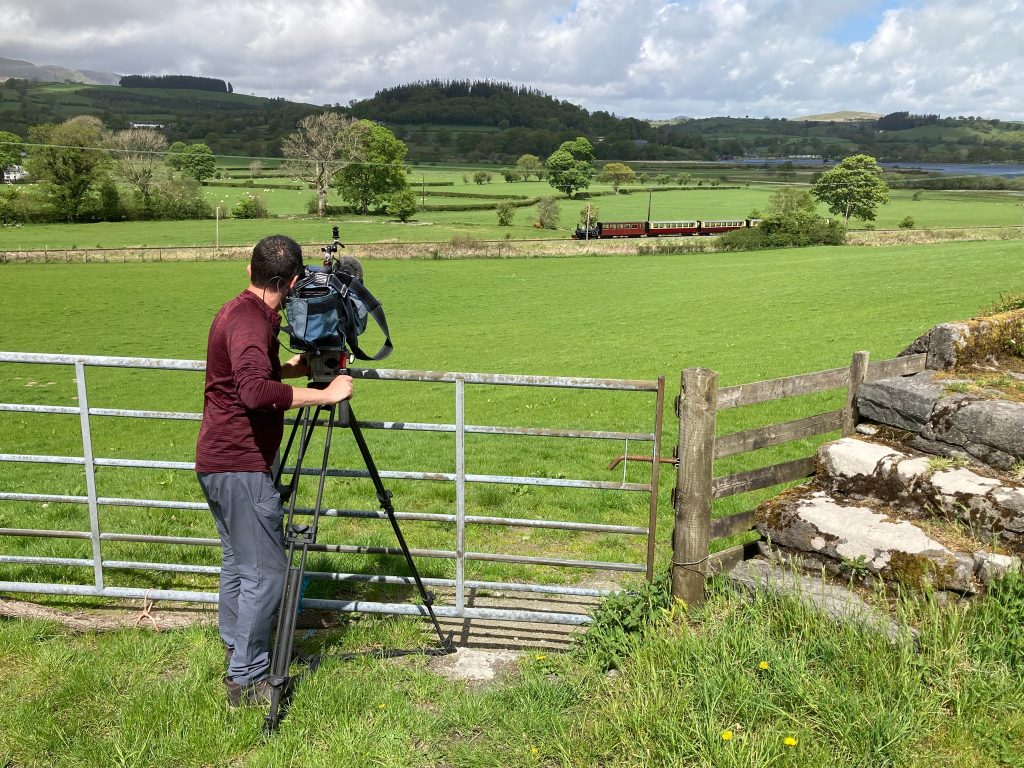 If this was not enough, ITV Wales arrived at the railway over our festive Bank Holiday weekend to record their piece on the celebrations taking place, with commentary from General Manager David Jones and Director Julian Birley adding detail to the proceedings.

On top of these two wonderful pieces of TV coverage, the railway was delighted to welcome to our party the august trio of dignitaries including local MP Liz Saville Roberts who is vehemently in favour of getting the extension into Bala built, and who had tabled a Parliamentary Early Day Motion on the BLR half-century which can be read online at https://edm.parliament.uk/early-day-motion/59689. Accompanying her was Mabon Ap Gwynfor from the Welsh Parliament in Cardiff. They in turn were accompanied by Councillor Dilwyn Morgan of Bala, another staunch supporter of the extension and whose name needs little introduction in these pages. 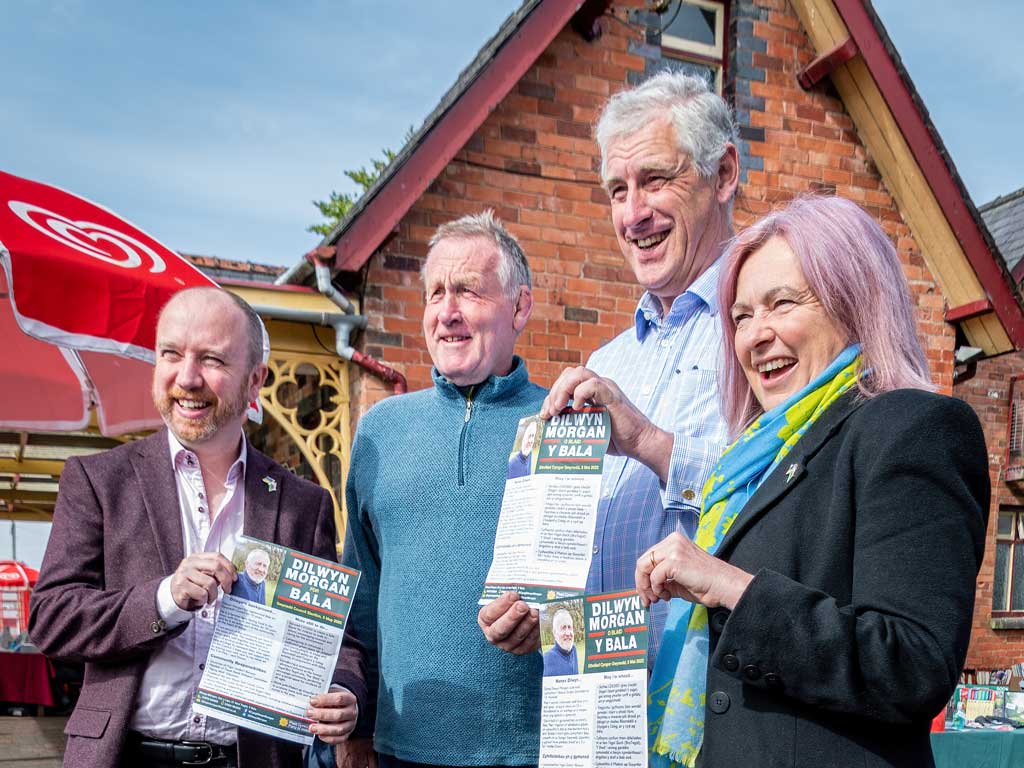 All three had taken time out, the best part of the morning, from their busy schedules to come as honoured guests and convey their best wishes to the railway for the 50th anniversary celebrations, Bala at 50, and in particular to promote the launch of Bala Lake Railway – The First 50 Years 1972-2022, the brilliant new publication featuring a photographic history from the first days of the line in 1972 up to the present day. Everyone at the railway was most appreciative of their time and effort on the behalf of the BLR.

Indeed, messages of good will came from all quarters, including other railways in Wales, illustrating yet again the atmosphere of co-operation that exists in The Great Little Trains of Wales. The well-known author and artist, Pauline Hazelwood, painted a delightful watercolour to commemorate the special weekend and it should be noted that the annual Alice Day will take place on the 30th July when Pauline takes up station on the platform at Llanuwchllyn to paint and read from her delightful series of books about Alice, Winifred and others, the readings always appreciated by children of all ages. 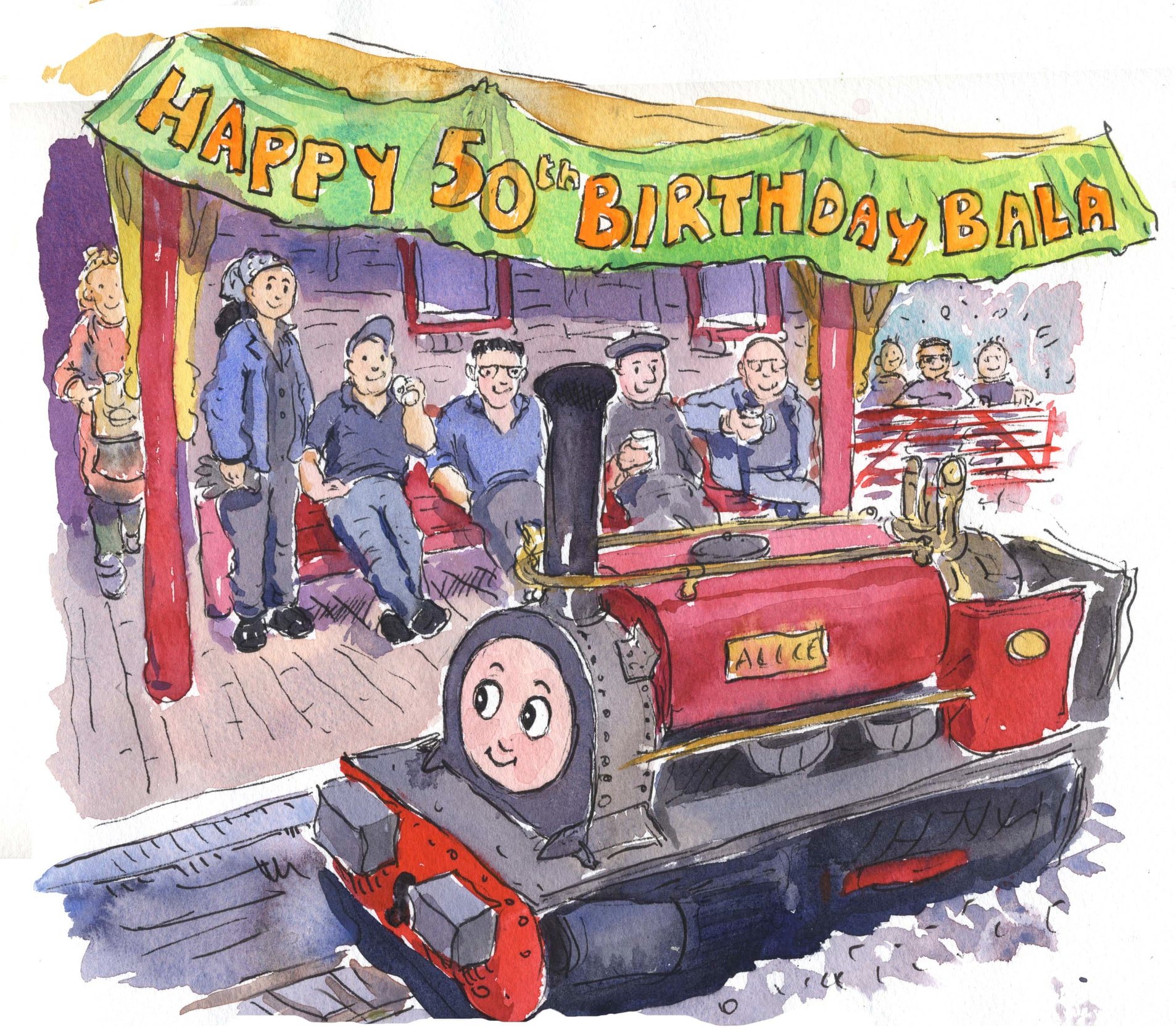 Bala at 50 over the Spring Bank Holiday weekend was a spectacular success. It should be remembered that this was only the start of the celebrations, with further special activities scheduled for the 13th August, the anniversary of the actual first train to the then terminus at Pentrepiod, with Llangower later as the second terminus as track progressed and Pant yr Hen Felin (sometimes erroneously referred to as ‘the sea wall’) being the third. The annual Steam Gala will take place at the end of August (27th to 29th) when anything can be formulated – and usually is – with double, if not multiple-heading and all sorts of permutations. 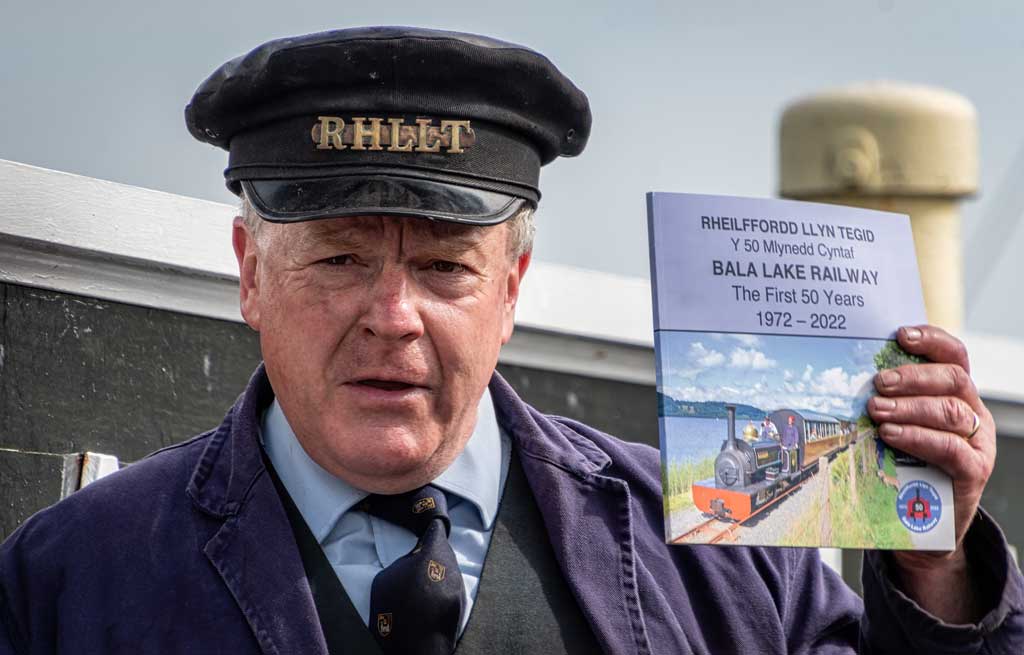 Returning to ‘Bala at 50’, the whole sequence of special activities started with a short bi-lingual speech by BLR Director Dr David Gwyn who mentioned that he had had the privilege of riding on one of the very first trains in 1972. 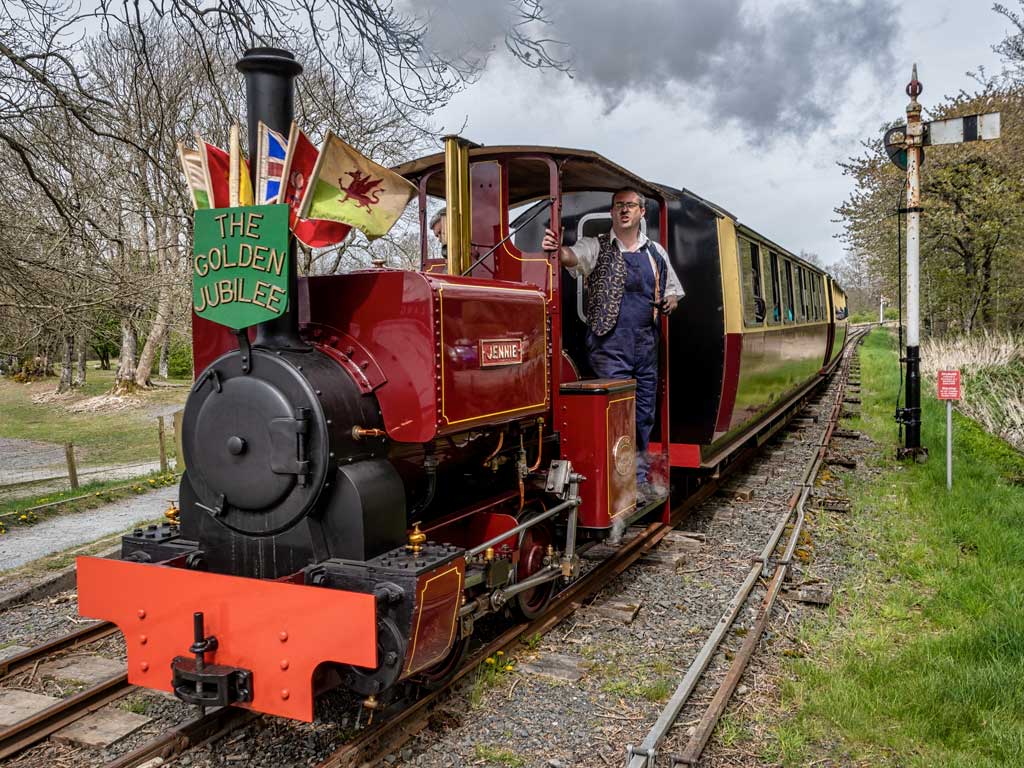 With the weekend corresponding with the one in 1972 when the first rails were laid, the first train of the day was a recreation track-laying ‘works’ consist top-and-tailed by our two R&H diesels, Lady Madcap and Chilmark, after which regular services commenced with traction by visiting loco Jennie which over the weekend was double-headed with George B, Maid Marian as well as Winifred which was specially steamed on the Sunday. 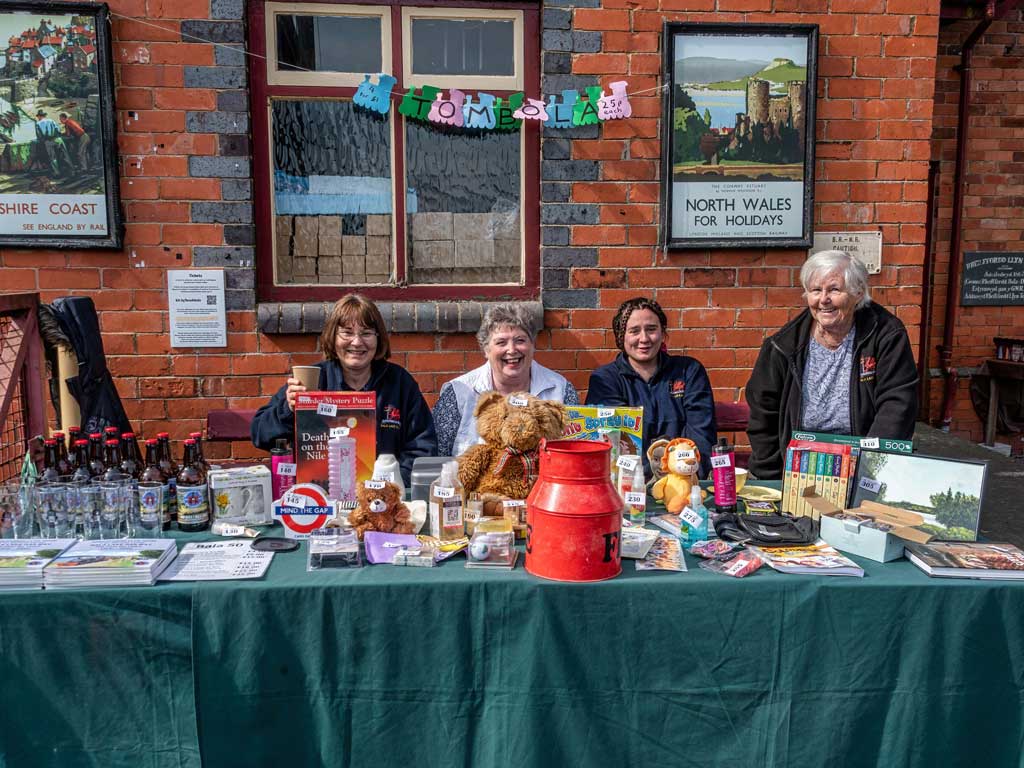 The varied attractions and staggering success of the whole initial event was down to the amazing team headed by perennial volunteer and driver Russell Prince (he of the flamboyant waistcoats) and his remarkable band of willing assistants. Apart from lining up other attractions like the two tractions engines and the steam lorry, a real rarity, the team also co-ordinated the production and launch of the very well received book titled Bala Lake Railway – The First 50 Years 1972-2022 of which over 100 were sold during the weekend and which other railways in Wales are selling too. Also conjured up in their fertile minds was the special Bala Gold beer which unsurprisingly sold out rather quickly! Don’t worry though as there will be more available in time for the August Gala. The limited edition Bala 50 beer glasses have almost sold out too but these will not be repeated, so get yours now! 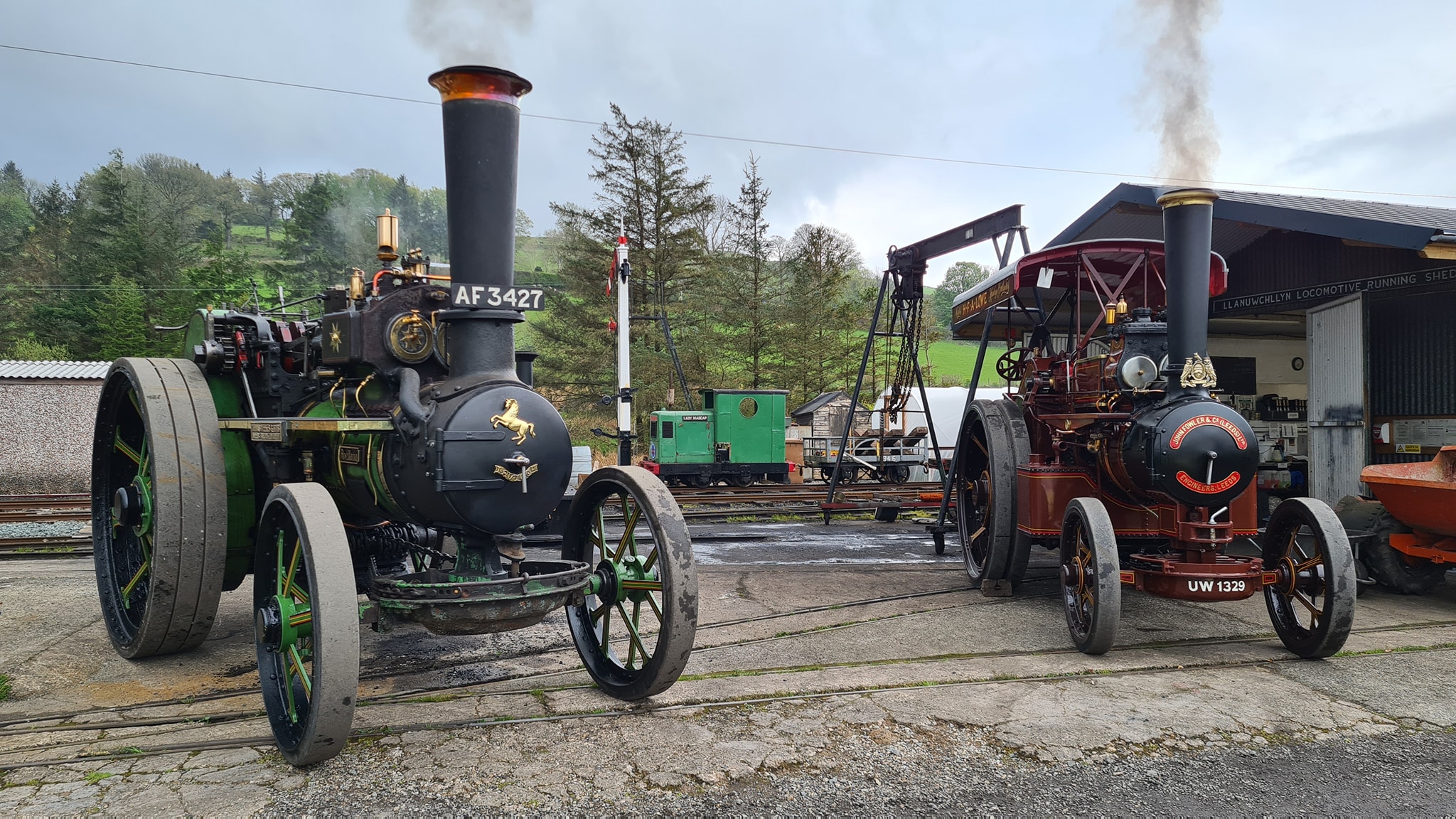 The two traction engines were busy over the whole weekend and it was hardly surprising that social media carried pictures of staff, directors and volunteers getting behind the steering wheels, including our lovely Liz Partridge who seemingly can turn her hand to piloting anything as long as it is steam-powered. The Sentinel S4 steam lorry was also a delight as these machines are so rarely seen these days. Our visitor was in normal 4-wheel configuration but even bigger ones were built, albeit in minimal numbers, such as an 8x4 twin-steer which had a three speed gearbox and could reach quite a turn of speed, depending on the fitness of the fireman. 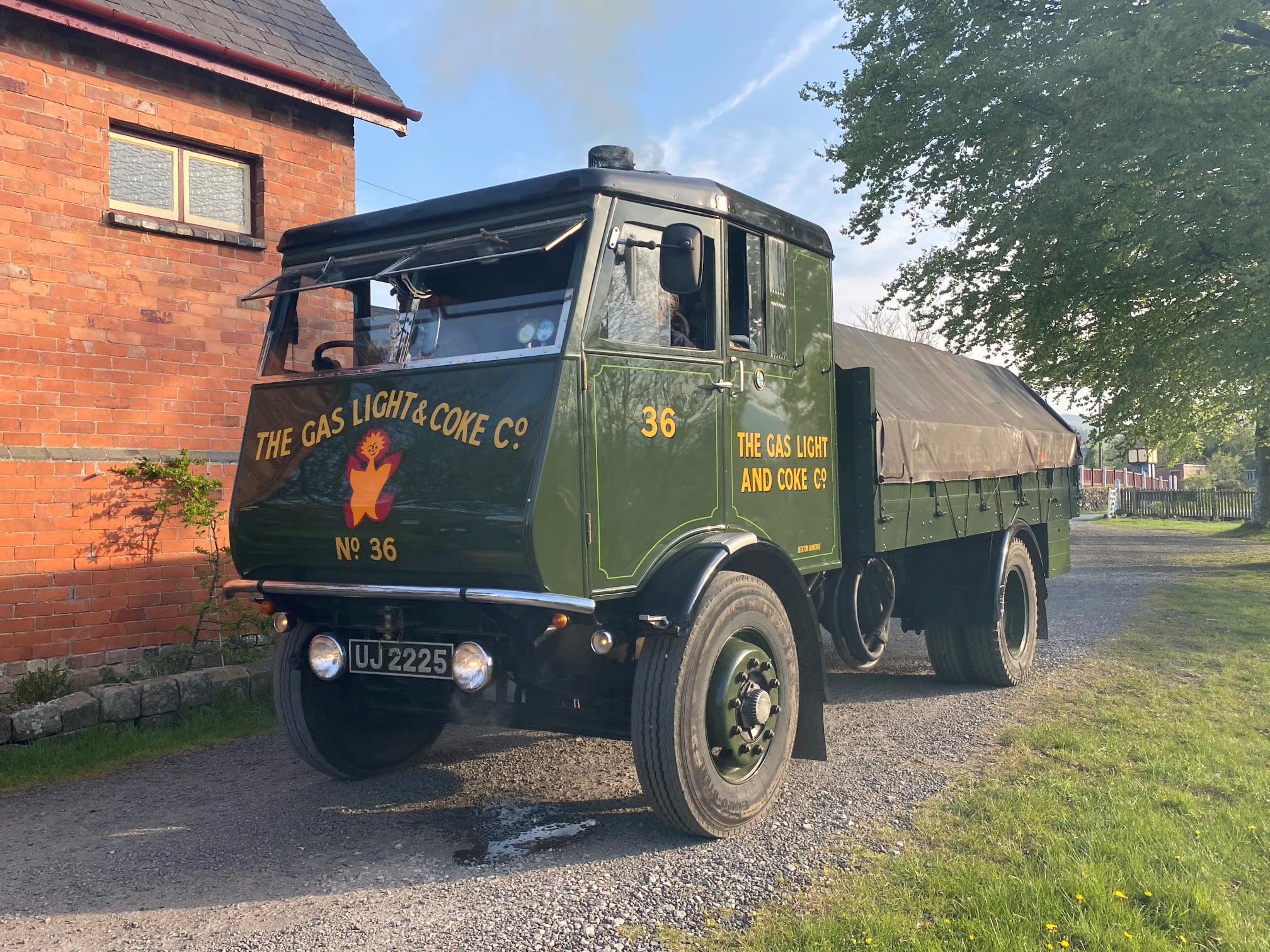 For those who prefer their railways smaller, the BLR’s 7¼ inch rails were laid along platform 2 from the coal wagons up to the General Manager’s office door. This attraction proved predictably popular, again to children of all ages. 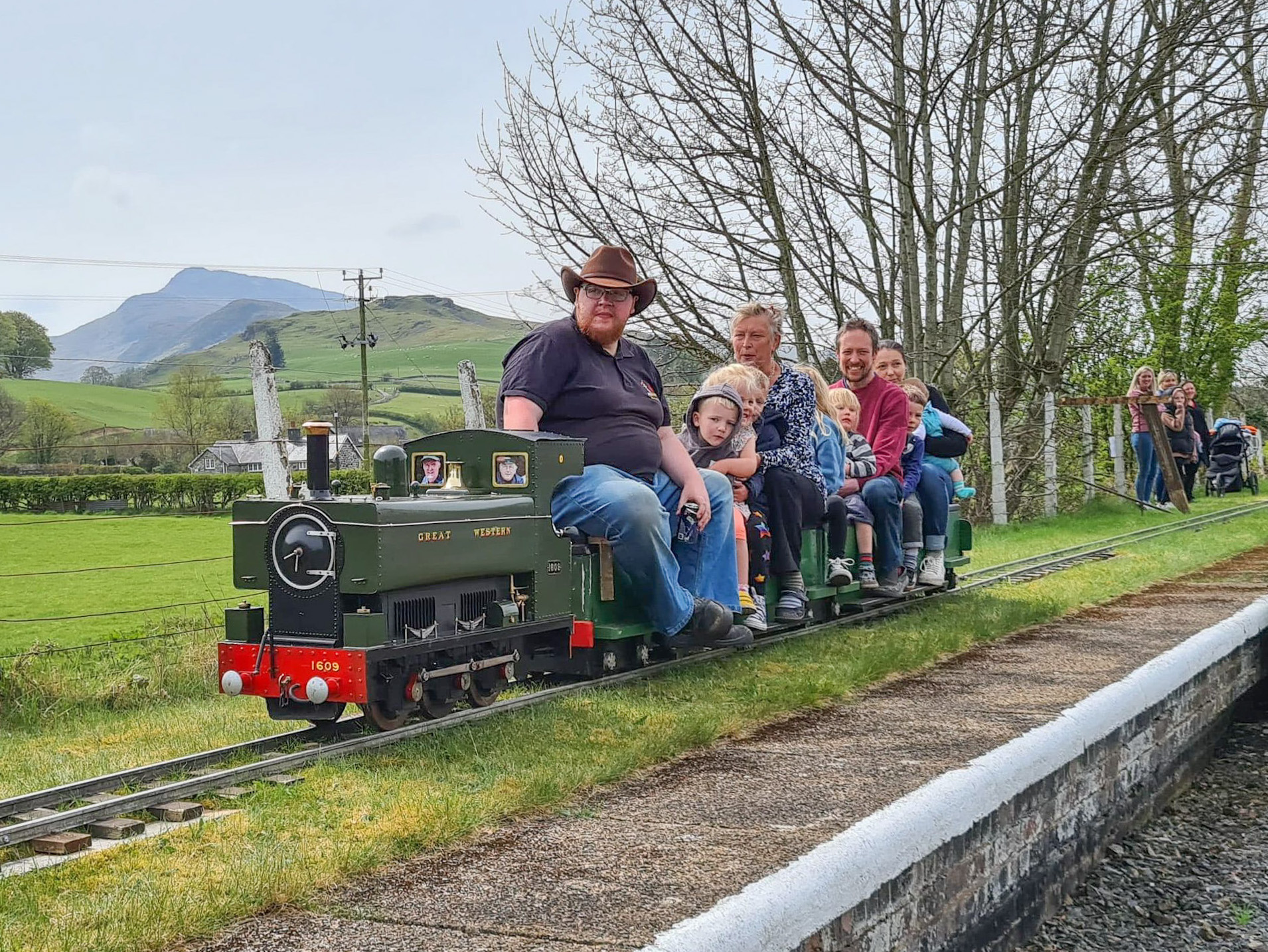 The Mid Wales Group of the Gauge One Model Railway Association (G1MRA) put on a display of Gauge One locomotives and rolling stock in our award-winning Heritage Centre. 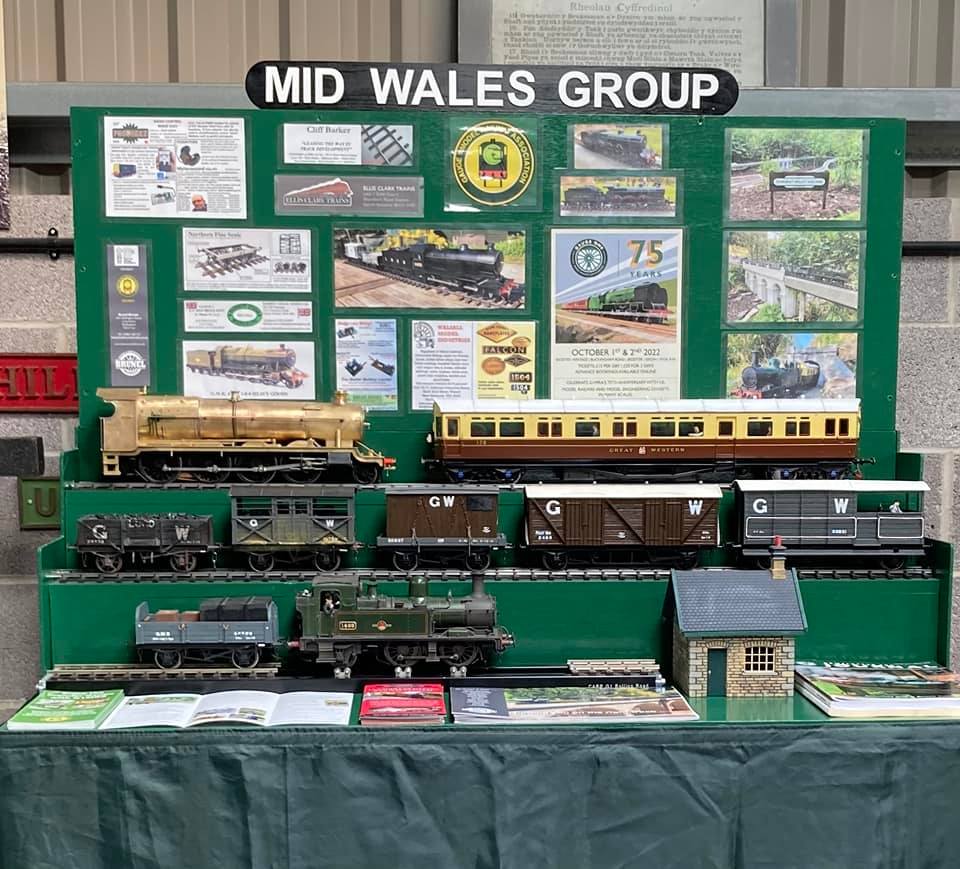 In addition a live steam 16mm scale layout 'Glendreich' was loaned by 16mm Association member Gareth Jones and set up in the Heritage Centre as well. This delightful 16mm scale layout has been seen at Llanuwchllyn before and was hugely popular over the weekend, particularly with the young (and not so young). 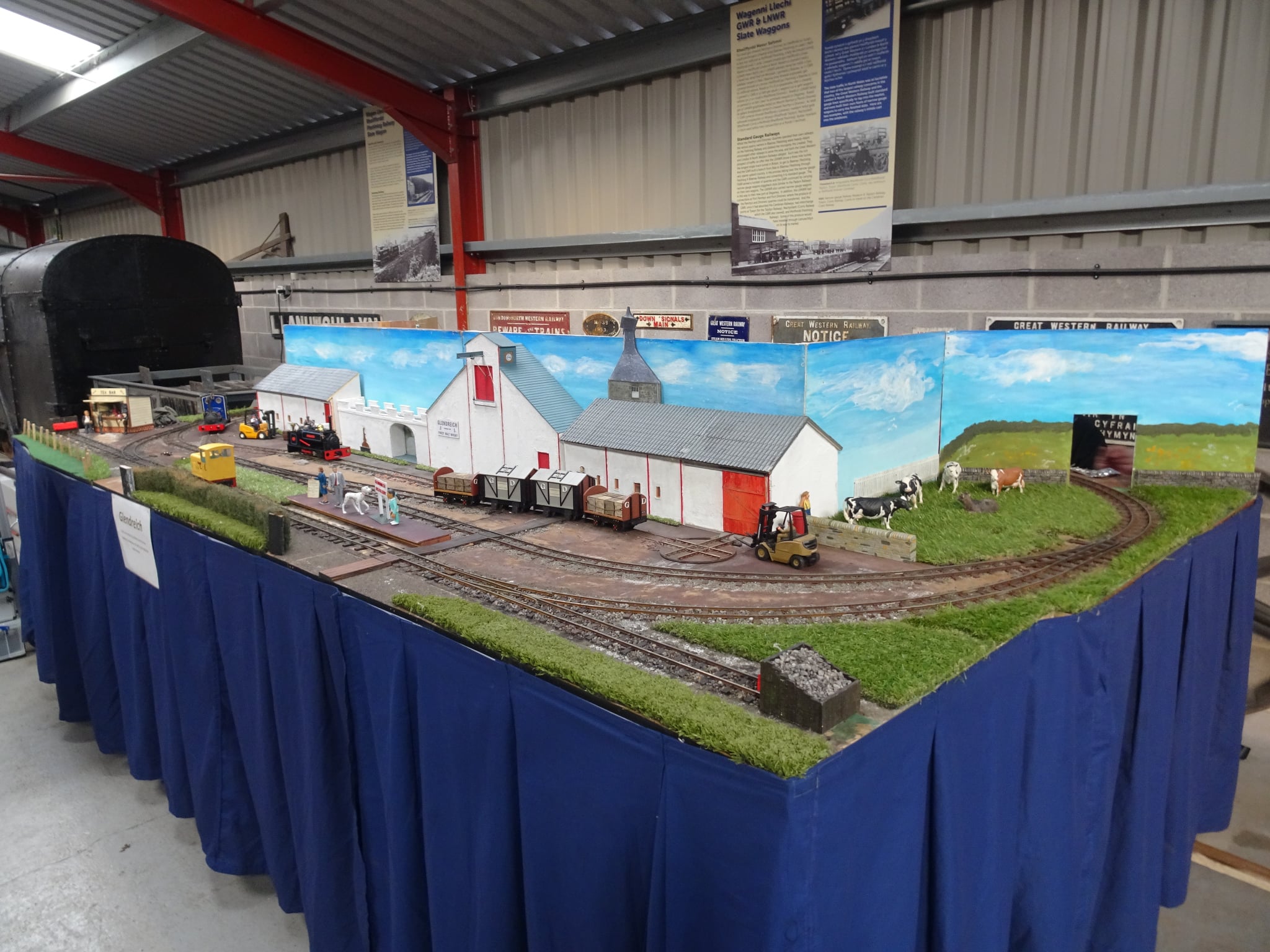 By way of slight digression, a remarkable co-incidence presented itself with the Sentinel. Many know the famous ‘Ivo Peters Bentley’ but what is rarely appreciated is that the great man bought his car second hand and then proceeded to chase trains for many years all over the UK. It came to light, during a chat between the owners of the Sentinel and the Bentley, that the former’s first owner was also the first owner of the latter, albeit not concurrently. Now what are the odds on that? It bears out the famous axiom; there is history everywhere. 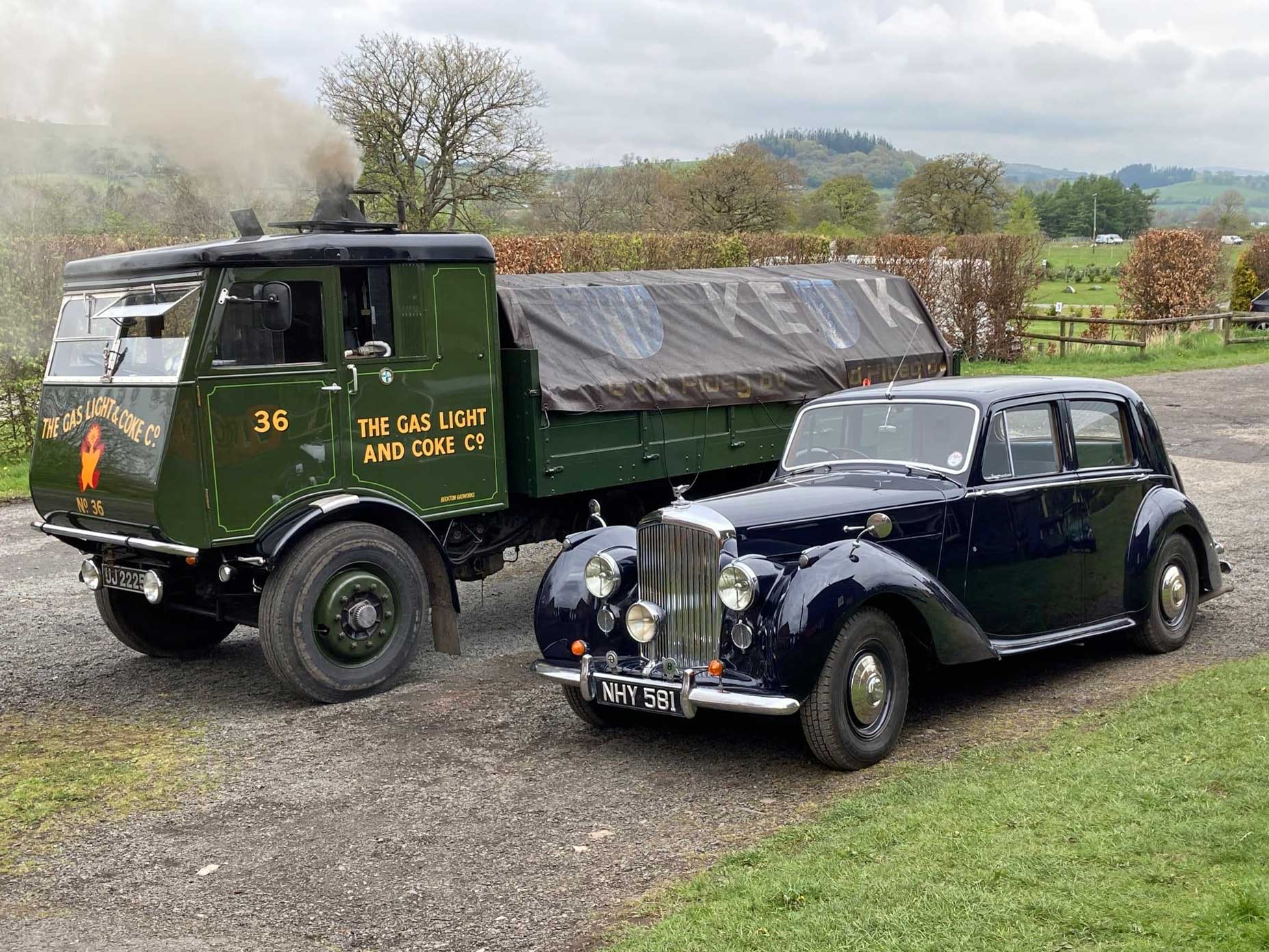 It almost goes without saying that with all the attractions on offer, passenger figures for the Easter period were very good indeed and when added to the ‘Bala at 50’ attendance, it made April our busiest on record. Combine that with the special celebration period and the total improvement of 15% up for the year needs little explanation – very pleasing indeed.

A couple of weeks earlier, our loco George B had a special visitor. The restoration of this loco began at the home of owner Alan White near Cardiff but as time progressed, Alan became less and less able to continue and asked the BLR to complete the project, which we were delighted to do. Sadly Alan passed away a couple of years after George B re-entered service, but not before having the opportunity to drive his engine on the railway. Just after Easter, Alan’s son, Dan, was on holiday in the area and wanted to sample his late father’s passion, so George B was specially steamed (in fact Dan raised the steam himself, under supervision from our Chief Engineer) and enjoyed the day double-heading with Maid Marian. Dan had the opportunity to drive the engine in the station later in the day and is now intent on coming to volunteer at Bala. 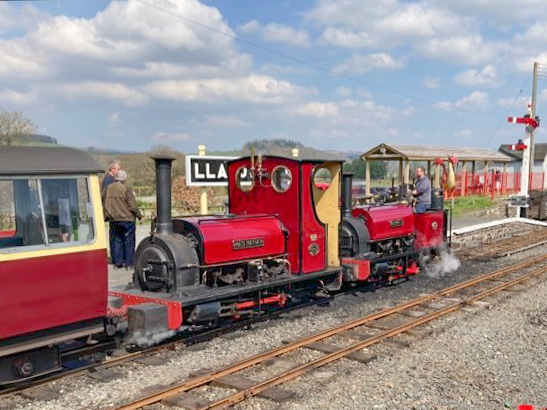 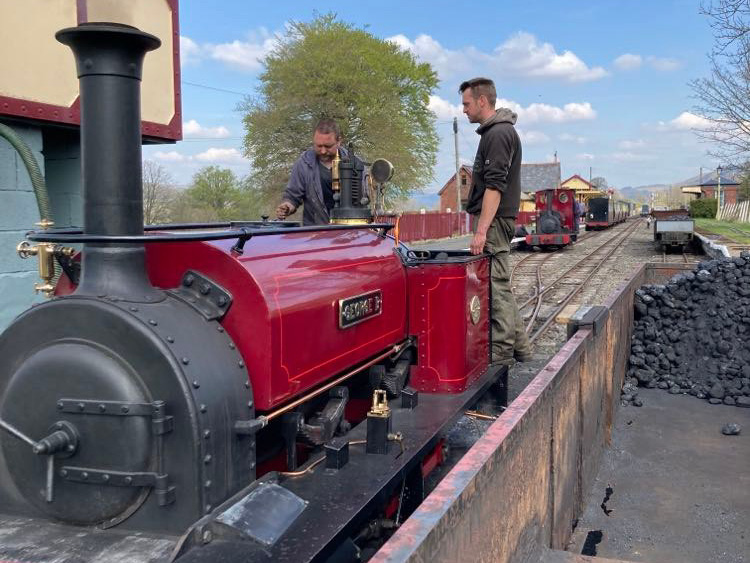 Not forgotten but nevertheless overshadowed in part by the celebrations was the annual Race The Train epic near the end of April where paddle-boarders attempt to beat the train from Pentrepiod to the Bala Sailing Club close to the end of the line. 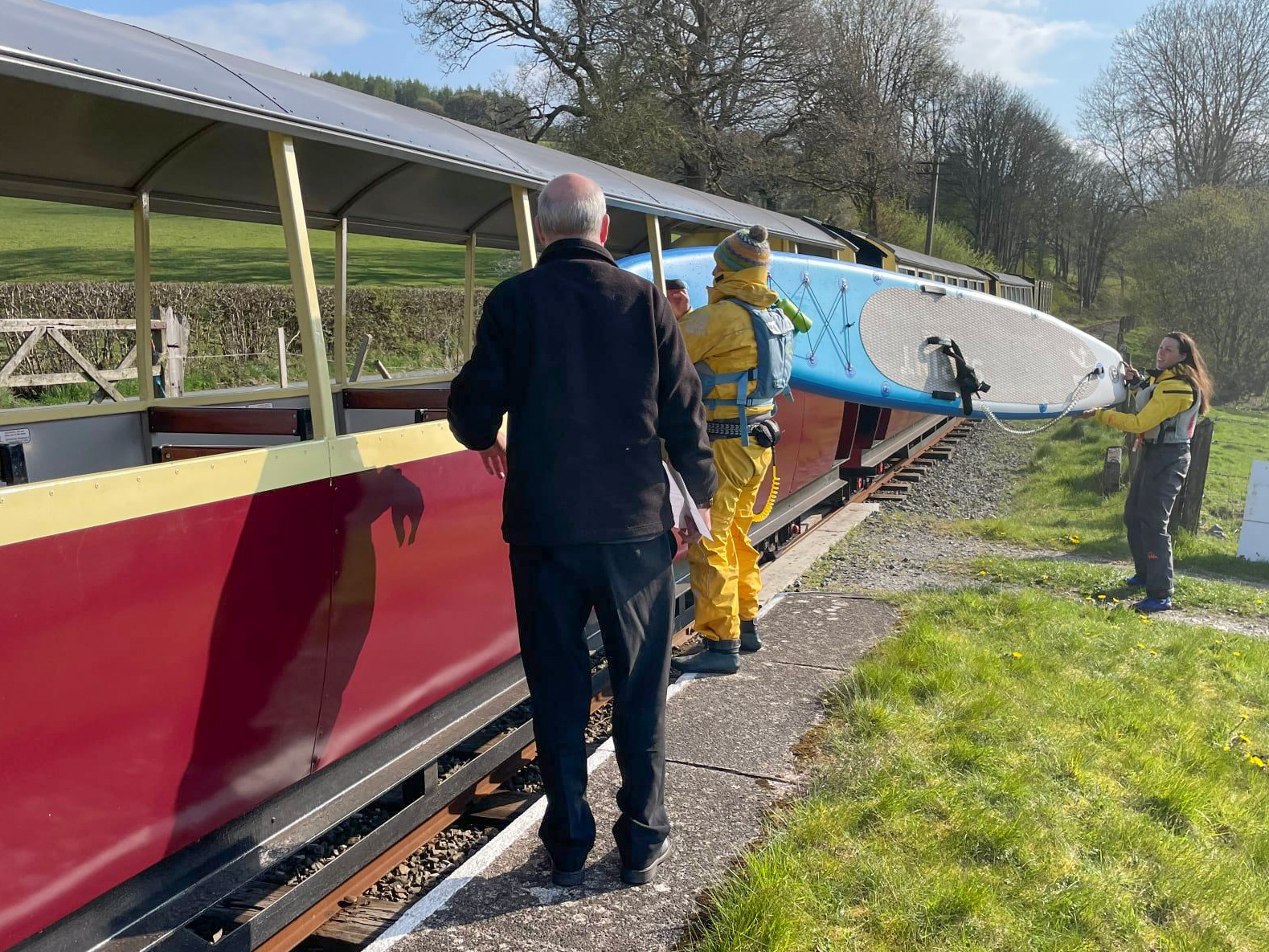 However, this year’s race had to be run in the opposite direction as there was a blustery north-easterly gale blowing the ‘wrong’ way down the lake. The conditions diminished the number of participants but a few of the hardiest duly set off. Indeed, had they brought umbrellas, their progress down the lake would have been decidedly speedy. As it turned out, it was another very close result with a superb final effort by one paddle-boarder sealing the victory, aided fortuitously by one of the loco crew having an altercation with some fencing! Well, that was their story and anyway, it was another example of sporting chivalry.

And finally…… it is only when one can ‘get down and dirty’ while volunteering that interesting items come to light. While working on the culvert at the bottom of Dolfawr bank, as we reported last month, the original tiny bridge came to light after brambles and other foliage had been cleared. Probably dating from when the Bala & Dolgelly Railway originally built the line in the 1850s, it shows that even a tiny culvert crossing merited beautiful stonework, something sadly that no passenger will ever notice. 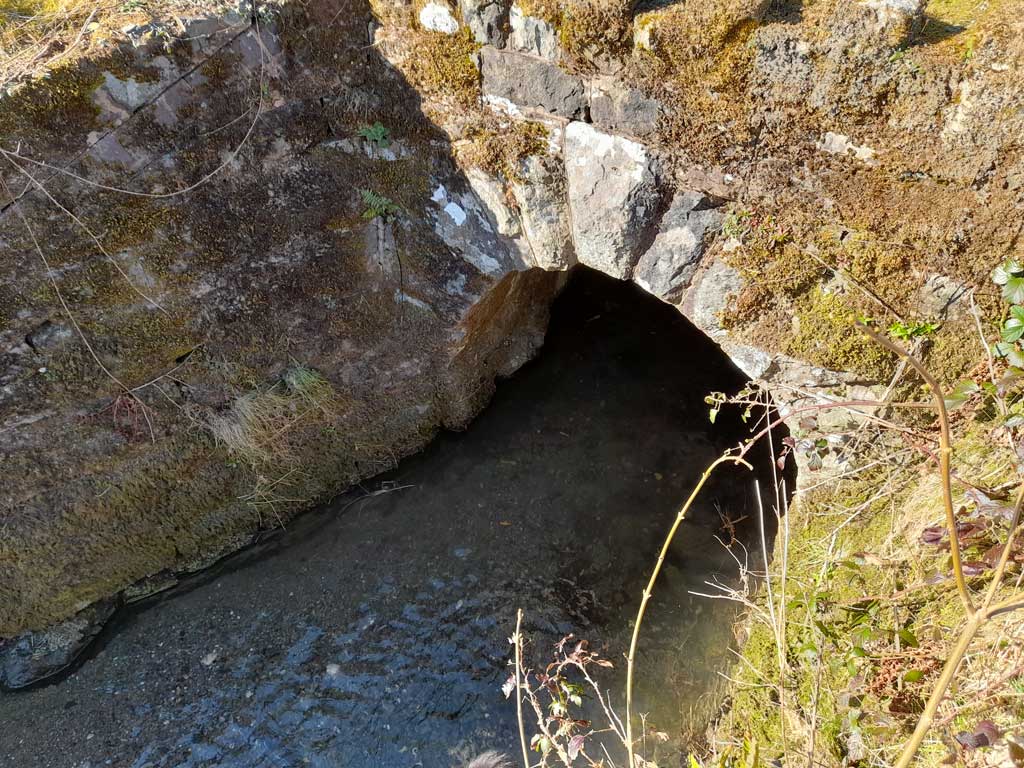 As mentioned earlier, we are proud of all those who so willingly gave of their time and effort to achieve so much in advance and during the Bank Holiday weekend. Thanks must go to: Those who helped with the set up in advance, who helped support the event, who ran and supplied catering services, stalls and the shop, who helped in the production of the book, who brought their layouts, locos and road steam items to provide the added extra interest, who helped promote the event via social media and the website, and to those who came and help celebrate with us.

Ponder also that there are, as announced, two more ‘Bala at 50’ events later in the year……