STOP PRESS! The Bala Lake Railway Trust, which has been working relentlessly for over seven years on the extension project to get the railway back in to Bala, has managed to secure a vital piece of land. Chairman Julian Birley was understandably overjoyed about this major success.

You can view the full Press Release regarding this on our website by clicking here.

After what seems like a winter without end, and following the resounding success of passenger numbers at half-term in February, the season opened on Saturday, 2nd April. Trains will now run every day in April with the exception of the 25th and 29th and Easter is filled with frequent services allied to special events, as detailed on this website.

On April 23rd, there will be the annual Race The Train spectacular, departing after 17.00 when paddle-boarders and kayakers attempt to beat the train from Pentrepiod to the Bala Sailing Club near the end of the line. As in previous years, many think that the train would ‘walk it’ but it remains a perennially close-run competition, remembering that the train crew have to secure the engine and then get to the distant sailing club. Provide the lake competitors with a good south-westerly breeze and the train crew will be struggling. This trial is always accompanied by much boisterous vocal encouragement which, if the wind is from the north-east, can be heard in Llanuwchllyn. All in all, it is a great annual spectacle and well worth supporting. 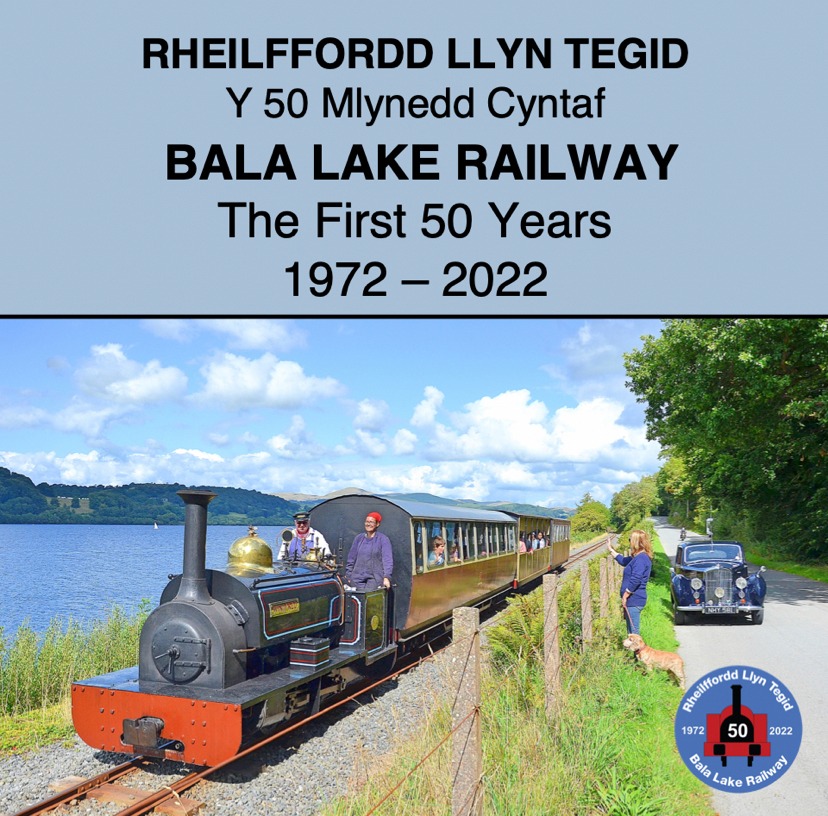 But the major event of the month, starting on the April 30th, will be Bala at 50 over the May Day Bank Holiday weekend where there will be a series of activities to celebrate the half-century of the Bala Lake Railway and to commemorate this, a new book has been published; Bala Lake Railway / The First 50 Years / 1972-2022 which is now available to pre-order through our online shop by clicking here. Having been privileged to be given a sneak preview, this writer can heartily recommend it, such is the fabulous array of historic photographs and erudite captions, and is much looking forward to getting his copy.

As we mentioned last month, we will have a guest locomotive, Jennie, which will be busy over the weekend. This website carries full details and booking arrangements for the weekend’s fun but if you have not viewed the website recently, here is a brief synopsis of what will happen.

It will be quite a weekend. Full details are available on this website by clicking here.

Natural Resources Wales, our staunch ally in helping the BLR Trust achieve its goal of re-laying track into Bala, publish a monthly report on their mammoth activities in improving the flood defences at the eastern end of the lake and it is on part of these defences that the new track will run, such was the co-operation they readily offered. Work on the improvements has already started and for those interested, some seriously impressive machinery can be observed trundling about.

The trees that line the embankment has been a point of discussion and we thought it would be prudent to let NRW clarify the situation, illustrating their well thought-out policy and consideration. Here are some pertinent aspects.

“During February, we completed the removal of self-seeded trees, mostly ash, which are growing in (and weakening) the lakeshore embankment. We have also removed specific trees along the back of the River Dee embankment whilst keeping the public footpath open. Our commitment remains that, for every tree removed, NRW will plant three trees locally. In March, we are beginning to fulfil this commitment with new tree planting along the corridor behind the lakeshore embankment and on land adjacent to the B4391 road”.

These and more comments are freely available on the NRW website and illustrate exactly why the BLR Trust finds them such an agreeable and positive partner in our quest.

The five month winter maintenance programme, so concisely laid out by the General Manager last year, has come to a satisfying conclusion and we are delighted to list the variety of tasks that have been finished.

Culverts; the two main headaches have been those half-way down and at the bottom of Dolfawr Bank where detritus washed down from the fields during the winter storms can do severe damage. Both these location received serious attention to unblock and clear away the rocks and sludge that had accumulated, after which the ‘galleries’ were cunningly lined with slabs and old concrete fence posts, and packed with porous plastic bags of cement which will set to shape in time. On top of that, time-expired standard gauge concrete sleepers were man-handled into place, thus providing a smooth and fast-flowing sluice through the offending area. Our engineers Rod and Dan were most ably assisted by the General Manager and Director Julian Birley, and particularly by volunteer Phil Billington who is a civil engineer and knows a thing or two about what water can do if not carefully managed.

For the bigger problem at the bottom of the bank, the team cleverly blocked the tunnel and then used a motor pump to pipe the water over the tracks and down to the lake. Again, much heaving and shoving built up the sides of the culverts with more sleepers and this brought the job to a successful conclusion, predictably assisted by the Chief Engineer’s dog. Bear in mind that a single concrete sleeper needs four strong men to lift it which is why this task was finished over the second working weekend, and this gives an idea of the enormity of the task. But such was the success that this gulley will only need minimal maintenance in the future. As the photos show, the team had all they needed on site, including a cement mixer and large amounts of tea. 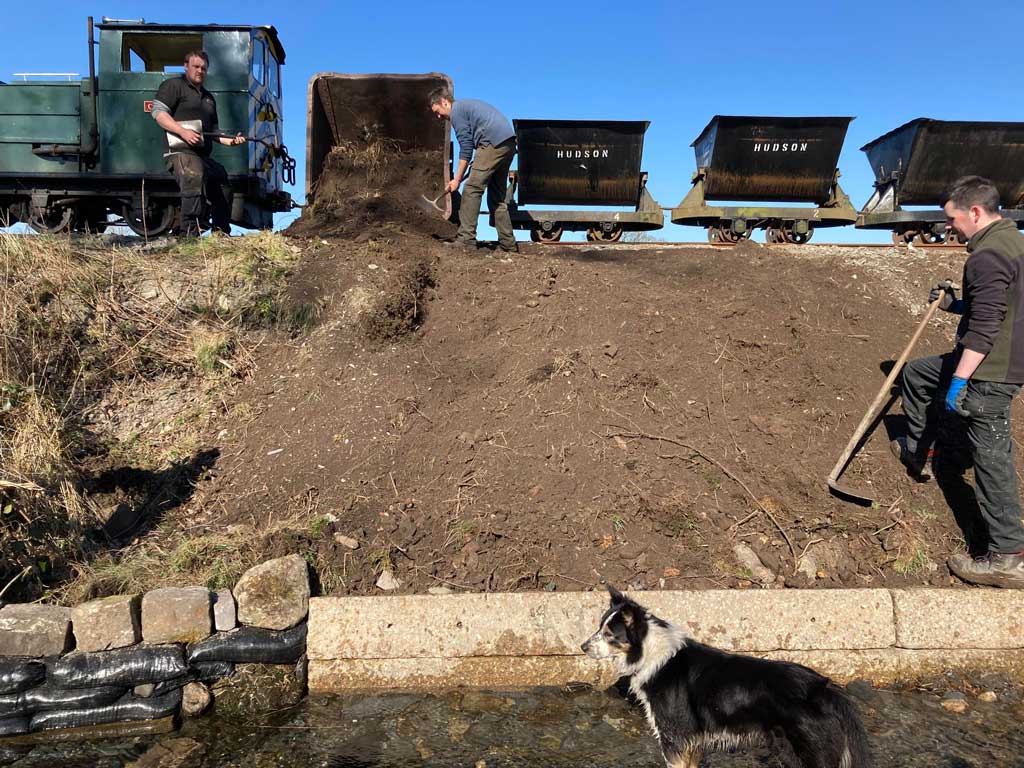 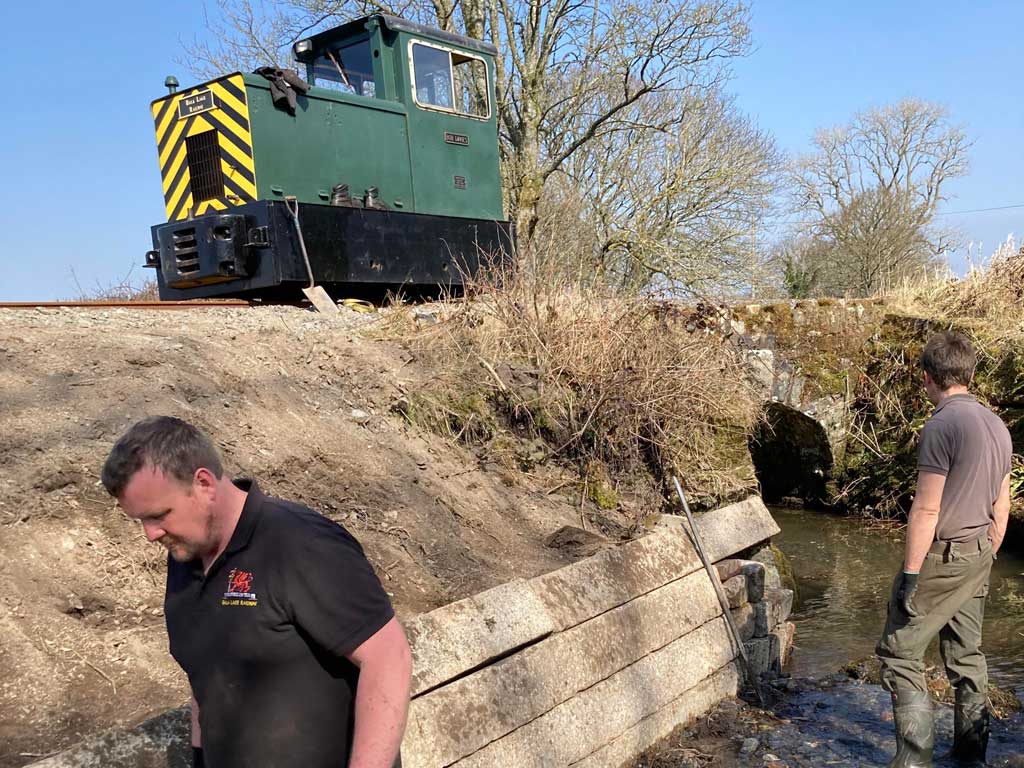 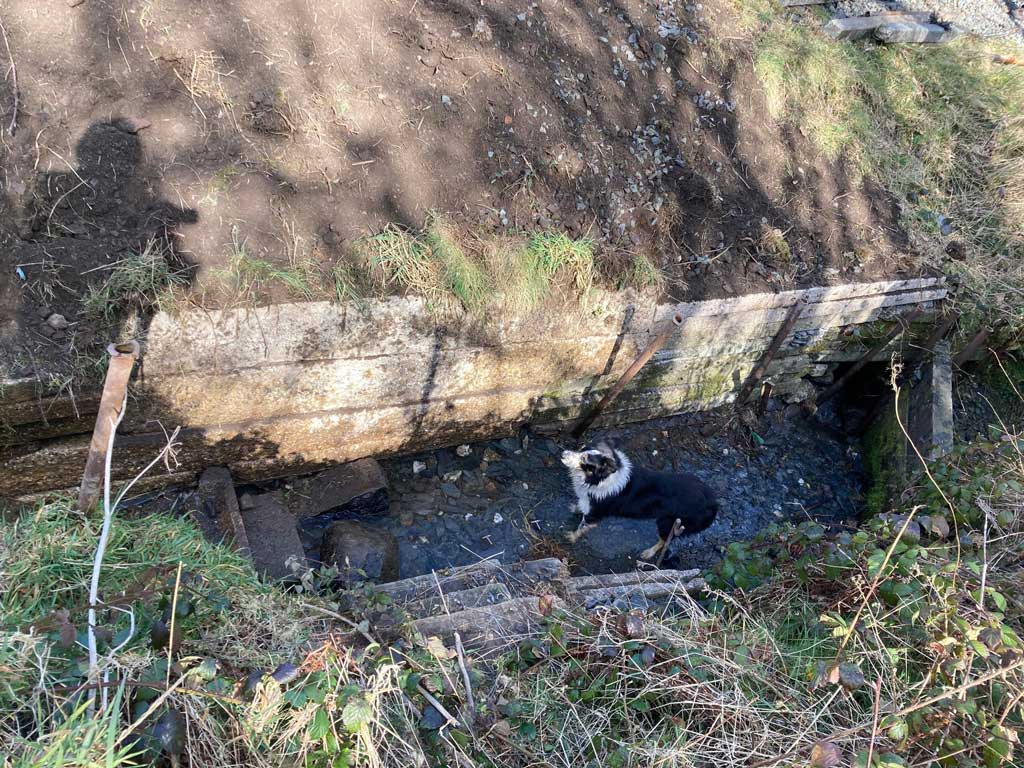 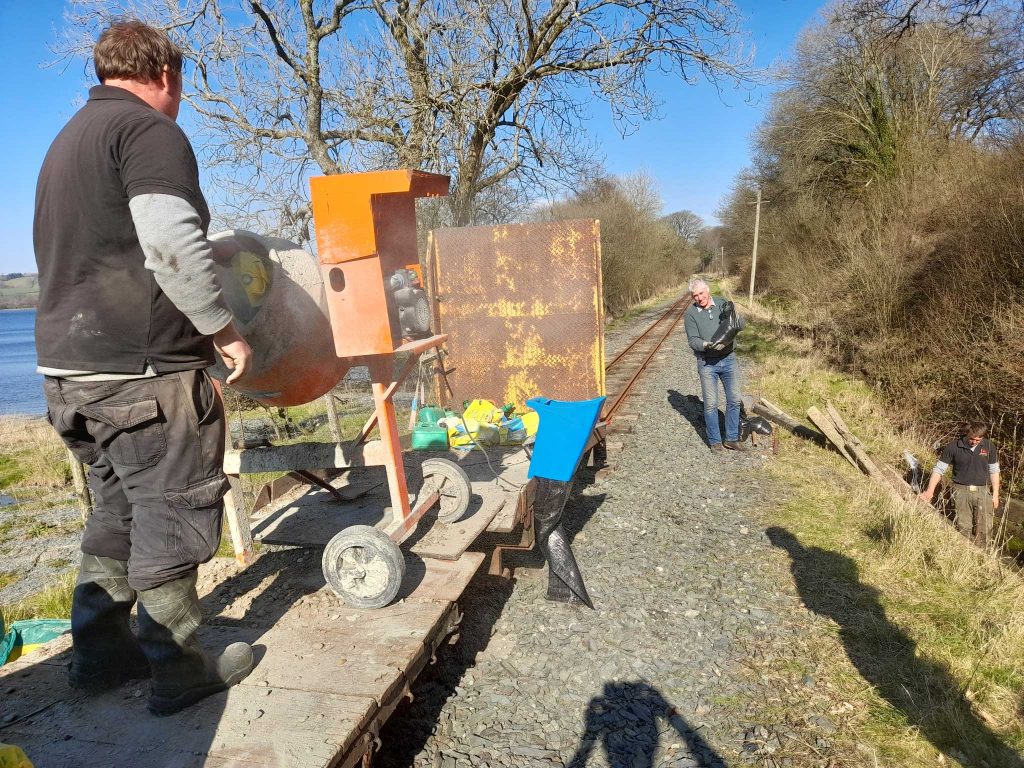 However, they could only briefly glance at the amazing azure blue of the lake, a very rare occurrence. 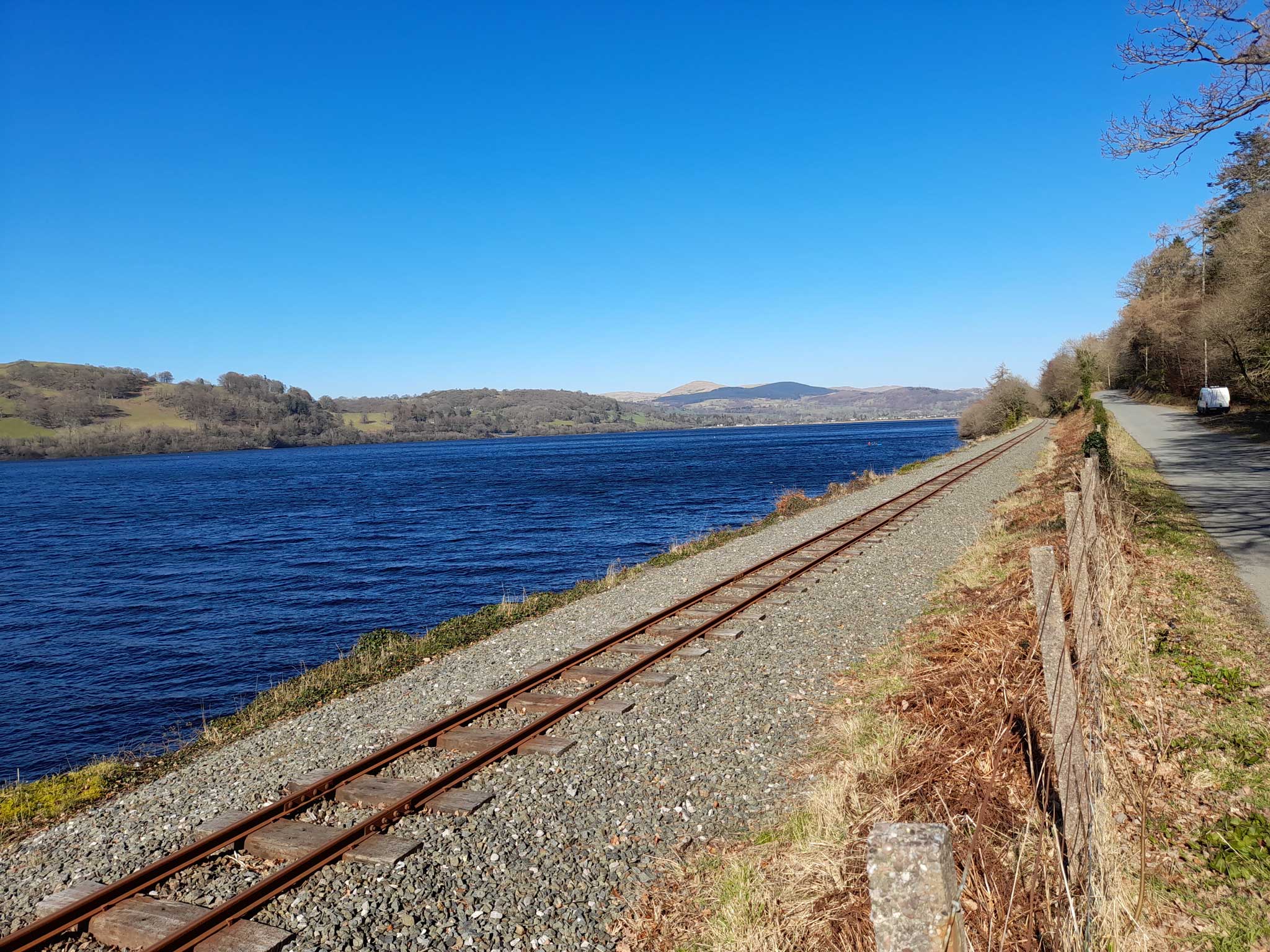 The work on the Signal Box is nearly done for this winter and Rod Fairley and Chris Scott have done wonders. As Rod summarises;

The taskforce has reached its winter target. We have installed new signal-box steps, (much to the delight of Bernard Allman, the chief signalman), renewed three of the main support posts, renewed associated window sills, fitted three new window frames and re-furbished three. Two of the windows still slide open and the remainder are fixed. Apart from a few small extra items to deal with, the box is now fit for purpose, ready for our celebratory year.

Other jobs which were completed were the removal of foliage along Ffynon Gower embankment near Flag Halt, thus really opening up the views for passengers along the lake. 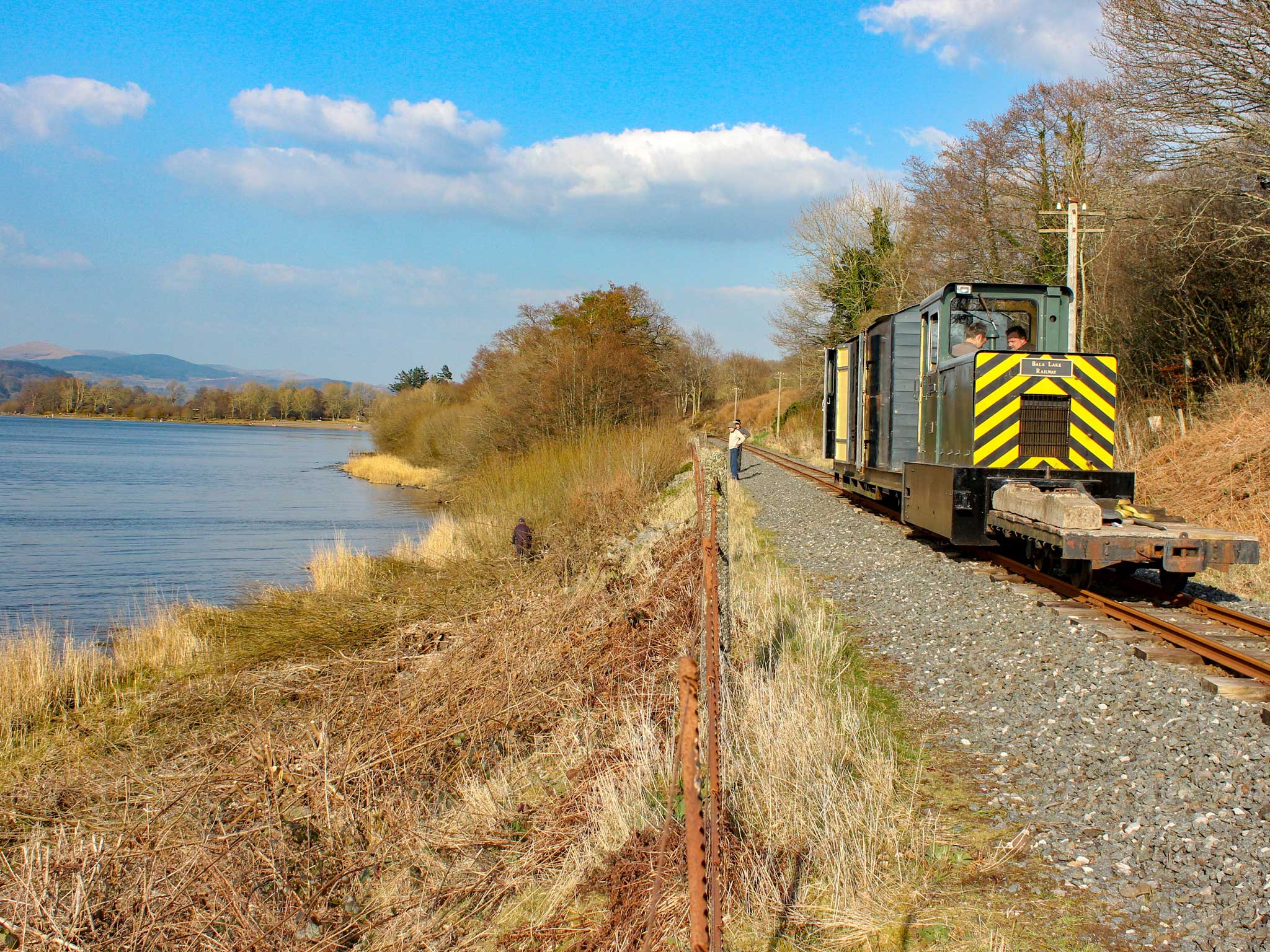 Francis Stapleton put the final coats of paint on the floors of three carriages, a back-breaking job, and now almost all the carriages have been done.

Roger Kent installed the newly varnished seats into ‘new’ carriage no. 4 while his wife, Christine, attended to the spring blooms along the platform. Going on to the webcam will illustrate her success. She also attacked the small garden next to the main gate, an area nobody notices as they drive in. After covering the dug soil with plastic, shrubs were planted through holes and extensive use of tree bark and chippings was used, as supplied after volunteer bush-whacking expeditions.

Finally, after some well-deserved TLC, our faithful diesel Trigger returned to service, to the delight of all including the Chief Engineer’s dog who appreciated the loco’s comfortable seats after the inhospitable interior of Chilmark during the last few weeks. 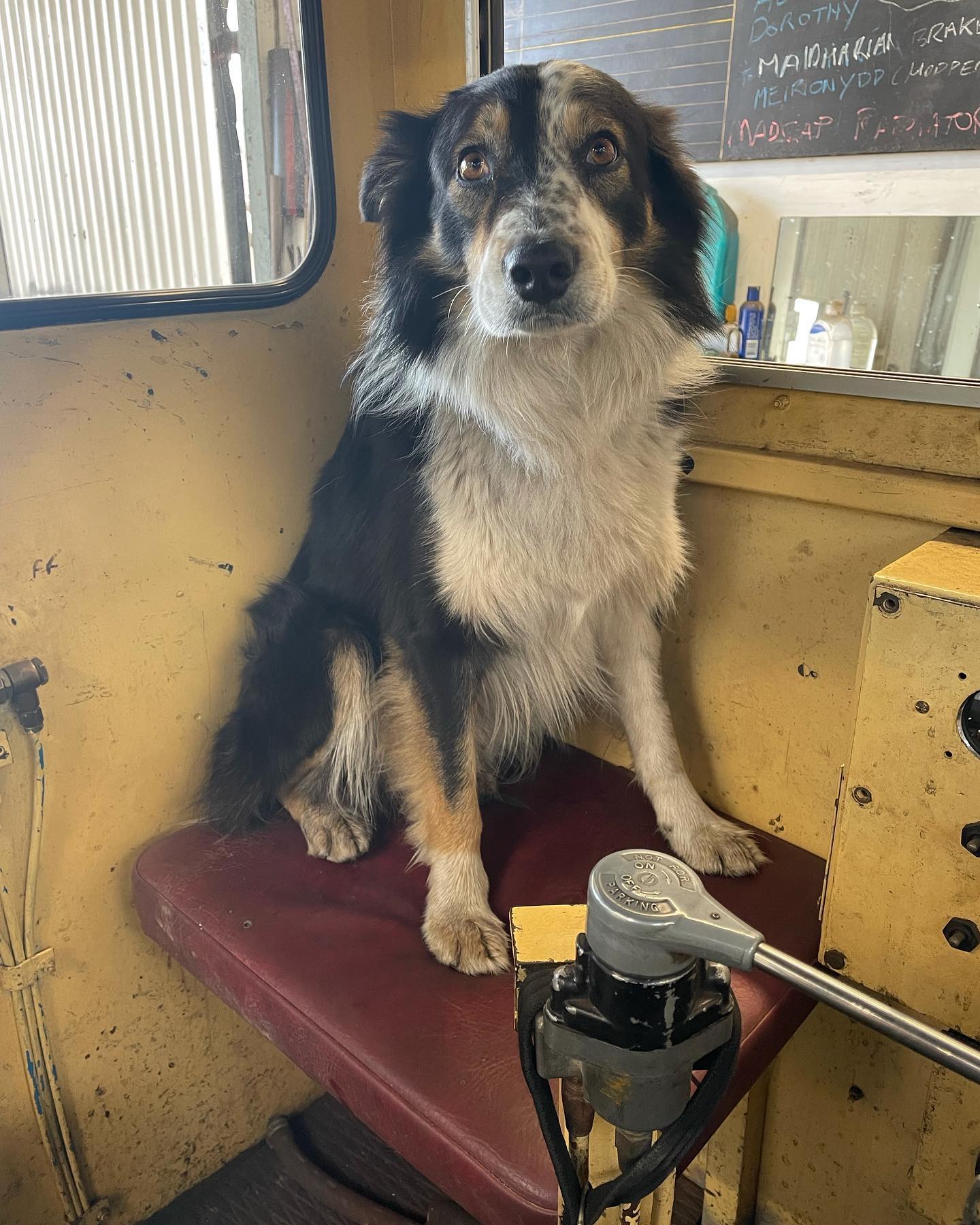 With nothing of importance left to do, the comment was voiced; “It all came together”.

Coal. This increasingly relevant subject either puts readers to sleep or spikes their curiosity. With gazes being focused increasingly in this direction for obvious reasons, it is worth putting forward some relevant facts.

Welsh steam coal is ideal and always the preferred option but it is now no longer available as the last working mine has not been given permission to extend its operations and is therefore closing. Less suitable coal from other sources has to be shipped from faraway places (which is not helping its CO2 credentials) and is becoming so prohibitively expensive that the importing merchants are not willing to order it. However, there are two substitutes being trialled, if one can call them that, but neither is as good as the traditional product.

Eco-Coal is basically anthracite dust compressed into briquettes and held together with a polymer binding agent, the whole then being combined with, of all things, olive husks and other vegetable-based additives! It is more expensive than ordinary coal and many railways simply do not have the space (or the funds) to store double the quantity in an effort to achieve a satisfactory mix.

‘Trevithick Welsh Steaming Ovoids’ are a similar alternative and are also found in the briquette form, not dissimilar to BBQ fuel. The drawback of these new varieties is that they have been found to be slower to light and get hot as they burn from the inside, which is obviously a problem for loco crews first thing in the morning. One aspect also is that they give off an odd smell, particularly Eco-Coal. Needless to say, one theory for minimising the odour, proffered at the start of the month, is to add ingredients such as stale cheese and time-expired pepperoni to the mix which allegedly enhances the aromatic environment.

With all heritage railways having to address this emotive subject, it is worth having a look at www.supaheat.co.uk to look at some of the options currently available.

And finally…… the culvert works were consuming old concrete sleepers at quite a rate but the BLR had cleverly amassed a pile in the corner of the new Bala station site. Bearing in mind the sheer weight of these things, an ingenious plan was hatched. Director Julian Birley fired up his tractor with a front bucket, drove it on to his trailer and, with a colleague, took the ensemble to the new station site where, using chain and strops, eight sleepers were carefully loaded on to the trailer and were taken to Llanuwchllyn, leaving the tractor on site as adding it to the load would not have been a good idea.

At Llanuwchllyn, Rob Houghton fired up the railway digger and, in a very slick operation, the sleepers were lifted on to the concrete in the yard for future loading on to a flat wagon. The party then returned to Bala to retrieve the tractor.

Our railway cat, Marian, was passing and decided to inspect the sleepers, as the photo shows. Naturally, our railway dog, Max, wanted to get involved too – but a well-aimed paw and some feline invective tempered his over-familiarity. 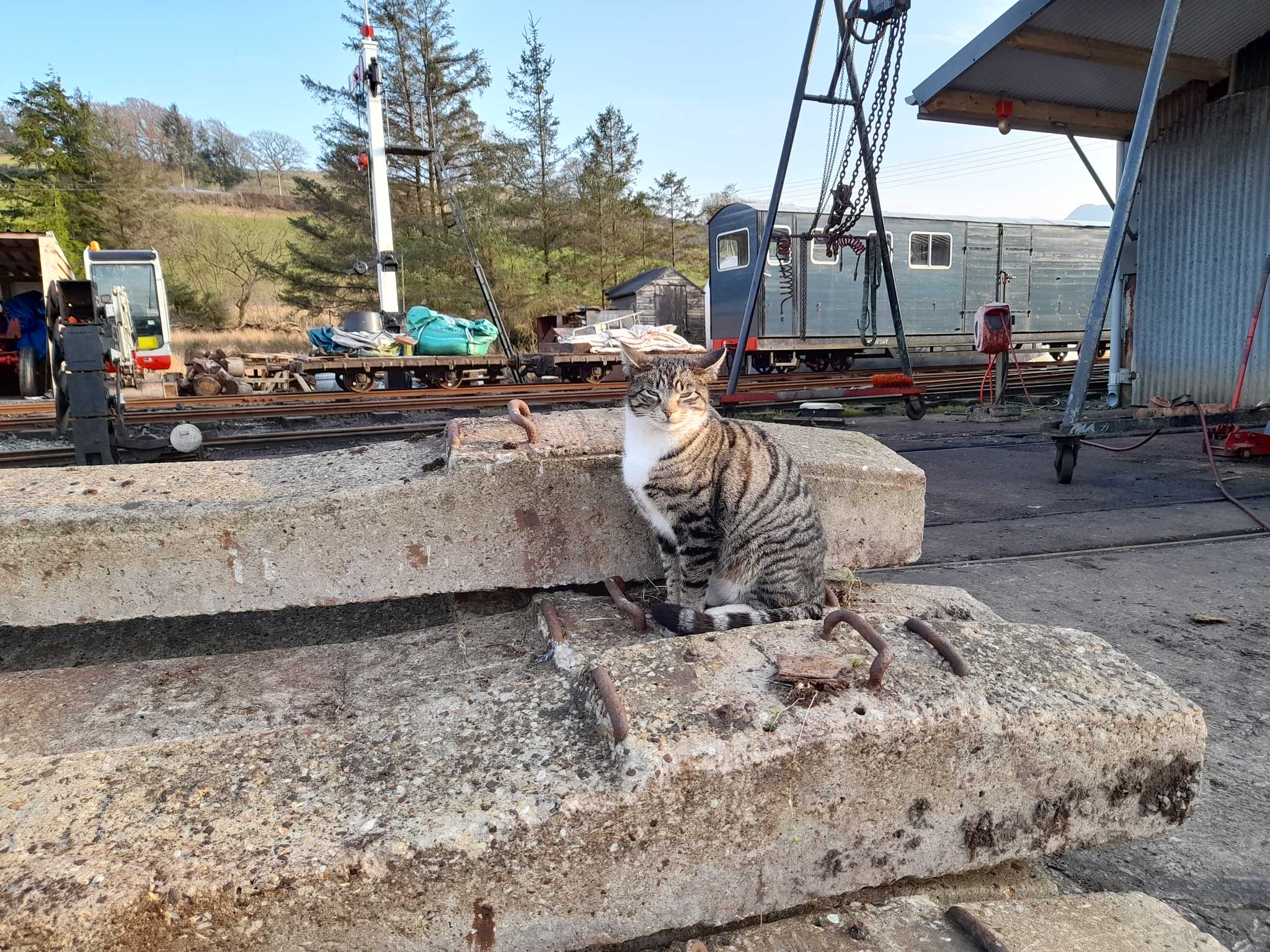